Read Secret of the Wolf Online

Secret of the Wolf 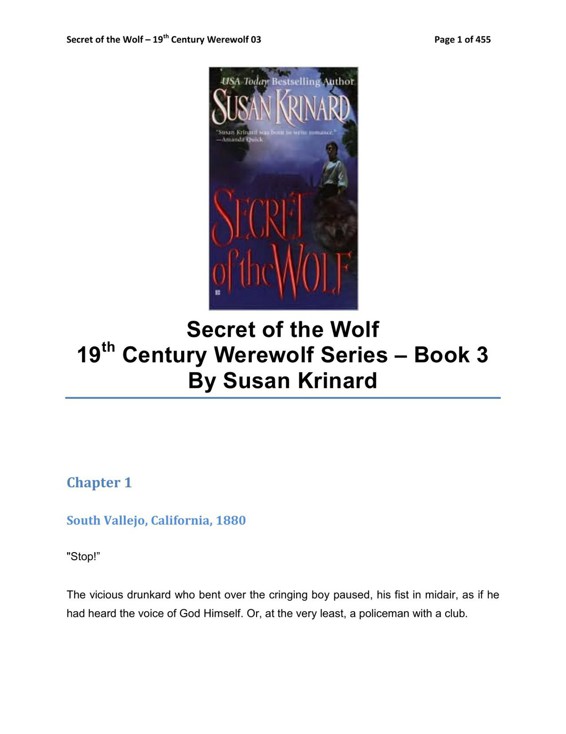 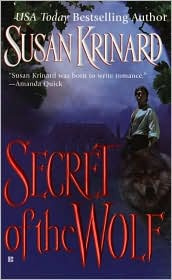 Secret of the Wolf

The vicious drunkard who bent over the cringing boy paused, his fist in midair, as if he

had heard the voice of God Himself. Or, at the very least, a policeman with a club
.

But if any policeman was to be found in this shabby excuse for a town, he was

otherwise engaged. Johanna Schell had no faith in police
.

Nor did she have any delusions of divinity. But she trusted in the air of authority she'd

cultivated for so many years, and in the strength of her voice
.

near the railway station. In the gathering dusk, she could just make out the man's

unshaven face, the scar slashing his chin, the filthy clothing. He reeked of cheap liquor.

The boy was pitifully thin, bruised, with the hollow, haunted eyes of one who had

endured many such beatings. Johanna had seen that look before
.

and a smirk. She saw the way he appraised her, judged her, dismissed her with the

dubious aid of his diseased brain
.

"You talkin' to me?" he demanded, swinging toward her
.

"I am." She set down her doctor's bag, took a firmer grip on her valise, and drew up to

her full height, almost the equal of his. "You will cease beating that boy, immediately, or

I shall summon the authorities.”

" He laughed. His young victim shrank in on himself, as if the laughter

were only another sign of worse to come. "Who the hell you thin' you are, Miss High-'n'-

"I am a doctor. I've seen what you're doing to that boy.”

"Boy?" He grabbed a handful of the boy's frayed collar and jerked him up. "This boy's

neither." He spat. "Doctor, huh. How good're you at healin' yerself?”

Johanna ignored his threat. "What has your son done to deserve this?”

The man's dull eyes grew confused. He couldn't answer, of course. There was no

reason for the punishment, save for his drunkenness and a natural depravity. But his

confusion quickly gave way to resentment. He yanked the boy this way and that, until

the lad squeezed his eyes shut and went limp
.

"You ha' no right to question me!" he snarled. "He's useless! Should throw 'im in the

Straits and be done with'm!" He dropped the boy and grinned at Johanna. "You, too.

Throw you in the Straits—af'er I have a bit o' fun.”

"I doubt that very much," she said. She tested the weight of the valise, grateful for the

heavy books that had made carrying it so inconvenient during her visit to San Francisco.

She turned to the boy. "Don't be afraid, mein Junge. I will help you.”

A large, dirty fist thrust itself into the air before Johanna's face. "You better help yerself.”

"I generally do," she said. "I've dealt with worse than you.”

He stared at her, as if she'd gone quite mad. Most of the denizens of the surrounding

neighborhood must run in terror of this bully; he wouldn't be used to defiance. He had

surely never faced those cursed by true madness. She had. And though her heart was

beating hard and her hands were sweaty inside her gloves, neither madman nor bully

would see anything but calm competence in the visage of Dr. Johanna Schell
.

Calm competence was usually enough. It reduced hostility in the vast majority of the

patients she'd dealt with in her father's private asylum. Even the most unruly of the

residents had learned she was no frail girl to be intimidated
.

This man was not one of the majority. He stepped close enough that his breath washed

over her face in a nauseating cloud. "Looks like I'm gonna have to teach you a lesson

moments ago. Johanna calculated the best angle of attack. Striking at his face was out

of the question. His genitals, however

"Run, boy," she urged the cowering child. "Run for help.”

His attention turned to his son just long enough. Johanna swung the valise. It

connected. The ruffian grunted in pain and shock. He staggered and flung out his arm,

hitting Johanna across the temple. She fell, dazed, as he pulled a knife from the

waistband of his trousers and lunged for her
.

The knife never reached its goal. Out of the shadows of the nearest alleyway, a dark

shape flashed in front of Johanna and seized the bully's wrist. Johanna pushed up onto

her elbows, struggling to make sense of what she witnessed
.

She couldn't. The shape—the man, whose face remained only a blur—moved too

quickly. He flexed the drunkard's arm back at an impossible angle. The knife spun into

Now it was the bully who crouched, mewling in fear. The boy had already fled.

Johanna's deliverer bestowed as little mercy as the bully had shown his own son. His

fist struck like a piston, driving the drunkard onto his back. A second blow followed, and

The avenging angel stopped. Johanna caught a glimpse of gentleman's clothing that

had seen better days, a body lean and tall

and eyes, their color indistinguishable

behind a glare of absolute hatred
.

The bully had met his match. This phantom would kill him, without remorse. He reached

down to finish the job
.

Johanna scrambled to her feet. "Please," she repeated. "Don't kill him, not on my behalf.

She had no way of knowing why the phantom had attacked, if it were for her sake, or

the boy's, or some unknown motive of his own. But he paused again, and in that

watched from the corner of a shack, his fist in his mouth, his bruised face white as a

"For the boy's sake," Johanna said, holding out her hand in supplication. She backed

away until she stood beside the boy, reached out to gather him against her side.

The man straightened. Again she glimpsed his eyes, enough of his face under a stubble

of beard to recognize what might have been a kind of coarse handsomeness. Then he

hunched over, blending into the shadows. His prey gave one last squeak of terror, a

mouse left half-alive by the cat. And the avenger leaped back into the alley from which

Johanna took the boy by his shoulders and held him steady. "Are you all right?" she

asked, sweeping him with her experienced gaze. Nothing broken. The bruises would

if his spirit did. "What is your name?”

"Peter," the boy whispered. A tear tracked its way through the dirt on his face, but he

straightened under her scrutiny. He looked toward the place where his father lay. "My

She swallowed, wondering whether it was sadness or relief she heard in his voice. "I

don't think he is. But I will not let him hurt you again.”

Peter nodded and did as she asked. She returned to the site of the unequal battle and

found the bully lying where her rescuer had left him. She knelt to count his pulse and

feel for broken bones. The right wrist was fractured, at the very least; he would have

swelling in his face and two black eyes in the morning. But he still lived, and she saw no

She rose and wiped off her skirts, as if she could so easily rid herself of this man's

barbarous taint. Odd; she couldn't quite bring herself to apply the same judgment to her

phantom, in spite of the harsh punishment he'd dealt out. Hadn't he given the bully a

taste of his own medicine?

She shook her head, bemused by her own primitive response. Her phantom. He was

nothing of the sort—merely another disturbed resident of this fetid dockside warren. He,

like the man he'd attacked, undoubtedly had a history of violence dating back to his own

childhood. He was likely beyond saving
.

But Peter was not. She left his father where he lay, collected the boy, and went in

search of a local doctor who could take charge of the case. She had to ask in several

physician. He was none too pleased to be called out at dinnertime, but Johanna

convinced him that she had the boy's care to consider. Quite naturally, that was a

She wasn't above using male prejudices when it suited her purpose
.

Peter, it turned out, had no living mother; but an elder, married sister lived in the town of

Johanna had no intention of leaving him in his father's "care" another night. She

doubted the father would pursue the lad once he was out of reach, and any life would

be better than this
.

By the time she and Peter reached the Frisby House, a ramshackle two-story frame

building that passed for South Vallejo's best hotel, the night was dark and damp with

fog. She bought Peter the hotel's plain dinner, which he ate with great appetite, and

secured them a small, musty room with two narrow beds. She treated his bruises,

checked under his dirty clothes for cuts or abrasions, and did her best to make him

wash up with the use of the cracked bowl and pitcher the hotel's housekeeper provided.

His youthful reluctance to obey was heartening, if bothersome; his spirit hadn't been

broken. There was hope for him yet
.

Afterward, he fell into an exhausted sleep. Johanna was left to make the best of her

lumpy bed and threadbare blankets, listening to the constant din of frogs in the marshes

The Glass Room by Simon Mawer
Sugar Rush (Offensive Line #1) by Tracey Ward
The Nightingale Legacy by Catherine Coulter
A Little Bit of Déjà Vu by Laurie Kellogg
Silverbeach Manor by Margaret S. Haycraft
Rapunzel by Jacqueline Wilson
Someday Find Me by Nicci Cloke
Glimmer of Hope by Eden, Sarah M.
The Neighbor by Dean Koontz
Don of the Dead by Casey Daniels
Our partner