Read Secrets of a Lady Online

Secrets of a Lady 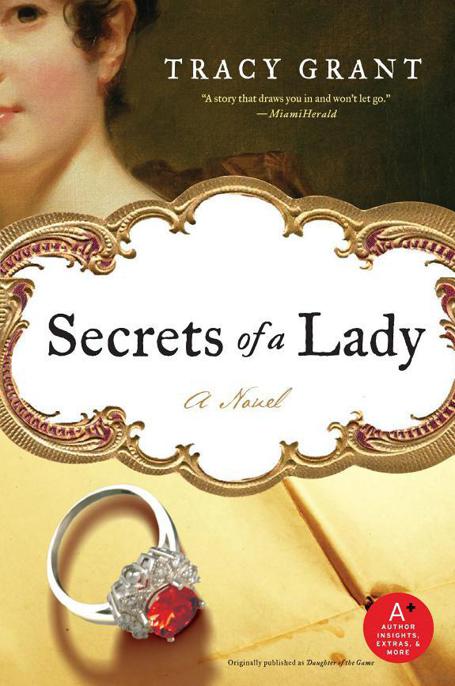 Secrets of a Lady

(Originally published as
Daughter of the Game
)

For Penny
with thanks for believing in the book and in
me, and not letting me give up on either one

There’s language in her eye, her cheek, her lip,
Nay, her foot speaks; her wanton spirits look out
At every joint and motive of her body.
O, these encounters, so glib of tongue,
That give a coasting welcome ere it comes,
And wide unclasp the tables of their thoughts
To every ticklish reader! set them down
For sluttish spoils of opportunity,
And daughters of the game.

…Truth is truth
To the end of reckoning.

It was the sort of night that cloaks a multitude…

“All the world may be a stage, but sometimes the…

A spasm of fear gripped Charles’s heart, a fear he…

Jeremy Roth, runner in the employ of the Bow Street…

Mélanie Fraser pushed herself to her feet and crossed to…

Even in winter, their rocky slopes dusted with snow, the…

The sound of retching told Charles where to look. He’d…

A shutter slammed shut in Charles’s brain, leaving him in…

Mélanie gripped the edges of the carriage seat to steady…

For a moment, Charles forgot to breathe. “Did Miss Trevennen…

Charles sprang down from the carriage in front of the…

Mélanie came to to the feel of rain falling and…

The lad Charles had employed to watch Trevennen’s rooms reported…

Charles slackened his hold and sat back on his heels…

The smell hit Mélanie like a fist in the face…

Instinct took over, honed by years of dodging snipers’ bullets…

Mélanie slackened her grip on Charles’s shoulders and drew back.

“Colin is a sensible boy,” Blanca said. “He’ll know you…

The street door of Mannerling’s gaming hell was half open,…

The sound of wood splintering and metal snapping and bodies…

Mélanie choked, turned her head, and vomited onto the scoured…

Colin sat hunched against the iron headboard, his right hand…

Mélanie drew a steadying breath and forced her hands to…

Mélanie caught the smell of horses as she descended the…

The shrieks stopped, leaving an eerie silence. Mélanie pushed herself…

“You were right. Edgar was in love with Kitty.”

As they descended the front steps of the Constable house,…

Mélanie looked up at Charles, who had knelt beside her.

The words reverberated in Charles’s head. He looked at his…

Mélanie saw a tumult of feeling rush across her husband’s…

For a moment, all Mélanie could do was stare. The…

On a warm spring afternoon, in an open carriage, bound…

Two pistol reports ripped through the room. Pain tore through…

Mélanie forced another sip of lukewarm coffee down her throat.

The report of the gun echoed through the narrow alley.

Colin took a sip of milk. His fingers were curled…

It’s just past ten. I can hear the crack of…

Other Books by Tracy Grant

I
t was the sort of night that cloaks a multitude of sins. Clouds drifted across the three-quarter moon. Mist hovered over the cobblestones, like cannon smoke after a battle. Yellow pools of lamplight glowed with murky radiance. Even in the classical expanse of Berkeley Square, with its pedimented houses and stately trees and decorous gravel walks, damp and soot choked the air.

Two passersby in sturdy wool cloaks stuck close to the shade of the plane trees by the square railing. They could have passed for a pair of manservants returning home from their evening off, the better for a pint or two in a Covent Garden tavern or even a few glasses of blue ruin in a St. Giles gin mill. Which was exactly the impression they intended to give.

The slighter of the two paused to tug her felt cap more firmly over her hair. A long apricot-colored strand slipped loose and swung over her shoulder. The woman, whose name was Meg, muttered a dockside curse and pushed the telltale hair back into its pins. She knew she should have cropped the whole mass short. Vanity had no place in games where one played for life-and-death stakes.

Her companion cast a sidelong glance at her. She could feel the impatience rising off of him, like the stench of damp in the lodging house where she’d been born. That was the problem with Jack. His quick temper had been the ruin of more than one promising job. A knife blade could be right handy, but at the wrong time it was as likely to land you in hot water as to get you out of it.

Music sounded from one of the larger houses across the square. Not the sort of music she and Jack danced to in the taverns of Seven Dials, their blood hot from the exhilaration of a job well done. No, these were the genteel tones of a waltz. A party was in progress. A decorous party. An expensive party.

The jangle of bridles and the clop of hooves echoed through the damp, sticky air. A whiff of pine and pitch came from the torches carried by the linkboys who ran alongside to light the way for the carriages. Perfectly matched horses tossed their glossy heads. Crested door panels glittered in the mist.

Jack turned his head. Curse the man. A glimpse of riches could distract him as easily as a woman’s smile could most men.

The door of the house swung open, and candlelight spilled onto the portico, bright as the glint of gold coins. Two footmen hurried down the steps. Christ,
they
were perfectly matched, too, from their silver-buckled shoes to their powdered wigs. Neither could be more than an inch under six feet. Perhaps their employers bred them, like the horses.

Dark-coated gentlemen and pastel-gowned ladies stepped down from the carriages. A month’s pickings in gold and gems sparkled on Grecian knots of hair, round white-gloved wrists, in the snowy folds of a cravat, on the ebony head of a walking stick.

Jack’s eyes gleamed with a lust hotter than he’d ever shown for her. Meg gave a quick shake of her head. There’d be riches enough for them tonight, but their work wasn’t here.

A gust of wind came up, sharp with the bite of November. The sweet, flowery smell of expensive scent and fancy soap drifted from the partygoers. Meg clapped a hand on Jack’s shoulder and urged him forward. He jerked away. When he looked at her like that she knew she was playing dice with her life.

Jack turned his gaze from the party and strode forward. A knot of tension Meg had barely acknowledged eased in her throat.

They walked on, the branches black overhead, fallen November leaves crunching underfoot. They knew the house they wanted. Four stories of smooth gray stone, a chimney-studded slate roof, and sixteen tall, ivory-framed windows across the front alone. A house whose owners had no need to worry about the window tax, nor the candle tax either, judging by the glow that came from the front hall even at this hour.

Meg and Jack had made a fair study of the building in recent days. Now they moved past the columned portico, with its shiny mahogany door and gilt-tipped fanlight and lacy wrought-iron lampposts, as if it was no different from any other house that lined the square.

They rounded the corner and turned into the mews. The air smelled of dung and saddle soap. A horse whinnied in its stall as they passed. Another stamped its feet. They paused to make sure there was no human disturbance, then moved on.

Jack had promised that the gate to the back garden was well oiled. For once, he was true to his word. It swung open without a sound. The garden was a mass of shadows. Meg paused and let her eyes adjust until she could make out the trees and shrubs, the metal furniture and stone statues.

She started forward. Her soft-soled shoes skidded on the mist-dampened flagstones, and she nearly went crashing into a bench. Jack caught her arm in a rough grip. His fingers had a bite like iron. She was glad, not for the first time, that she’d never been on the receiving end of one of his blows.