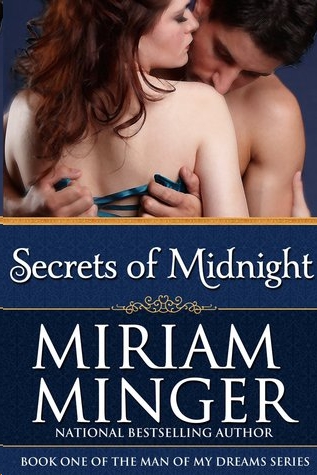 “It’s been five months since my last four-heart
rating, but this book was worth waiting for
.

Miriam Minger’s Secrets of Midnight
wins with a finely woven story . . . a marvelous tapestry of plots.” – The
Atlanta Journal and Constitution

With the exception of quotes used in
reviews, this book may not be reproduced or used in whole or in part by any
means existing without written permission from the author.

This is a work of fiction
.

Any references to historical events,
real people, or real locales are used fictitiously
.

Other names, characters, places, and
incidents are the product of the author’s imagination, and any resemblance to
actual events or locales or persons, living or dead, is entirely coincidental.

A Hint of Rapture

"Did you see the groom, Corie? His face all red
and sweaty and his bulbous belly out to here? Lord, the way he was leering at
Druella all through the ceremony with those little pig eyes! If I saw such a
sight walking toward me on my wedding night, I'd fling myself out the nearest
window!"

Fling herself Lindsay Somerset did, quite dramatically,
Corisande Easton thought as her best friend tumbled to the ground in a swirl of
white petticoat and silky blond hair.

Corisande's smile widened as Lindsay lay still as a
corpse with her slender arms outflung and her pink-stockinged legs askew in a
most unladylike fashion. Only the slight rise and fall of her breasts betrayed
her. Imagining what that awful termagant Lady Somerset would say if she saw her
stepdaughter behaving so wantonly, Corisande shoved away the unpleasant thought
and focused again upon Lindsay as the young woman began to recite in somber
dirgelike tones.

"Here lies dead a virgin bride, poor girl, wed to
a man who resembled a pig. Perhaps if she'd been allowed to choose her own
husband, she wouldn't be dead, she'd be dancing a jig!"

Corisande's burst of laughter was joined by Lindsay's
as she sat upright and brushed damp bits of grass from her gray merino walking
dress.

It was good to hear Corisande laugh. Lately she'd been
too serious by far, so many cares weighing upon her mind. So many things to do.
So many local wrongs to be righted. But Lindsay was determined that their last
afternoon together would be as lighthearted as possible, Corisande's
responsibilities forgotten if only for a short time.

For that matter her own worries as well, Lindsay
thought as she glanced out across Mount's Bay, the water's surface blinding in
the brilliant sunshine that had finally broken through the fog.

No, she simply wouldn't consider the possibility that
her stepmother might change her mind about allowing Lindsay to finally have her
London Season. Her father's second wife, Olympia, had been nothing short of
despotic these past eight years since her marriage to Sir Randolph Somerset,
but
she couldn't,
couldn't
be that cruel
. If Lindsay was forced to wait another year, she'd be
twenty-one and well on her way to spinsterhood!

"A brilliant performance, Miss Somerset, and an
even more apt observation about the groom." Corisande's voice broke into
her thoughts, her friend pushing a stray lock of auburn hair behind her ear as
she grinned down at Lindsay. "He did have the look of a prize Truro pig,
and with an unpleasant nature to boot, but you have to admit Druella Simmons
seemed quite pleased with herself, no matter that the marriage was arranged."

Lindsay met Corisande's smiling dark brown eyes, which were
a color that Corisande matter-of-factly considered plain as Cornish mud but
that Lindsay always assured her was quite lovely, especially with those amazing
green tints. "Yes, I suppose Druella would be pleased to have captured a
wealthy squire. She always claimed she would make the richest catch in the
parish."

"No, I believe she said something about the whole
county." With the gift of a mimic, Corisande affected a lofty nasal tone
that sounded just like Druella, a local girl who had long lorded it over other
young women of her acquaintance just because her father was a baron, albeit an
impoverished one. "And then, my dearest,
dearest
darlings, you must all come to my beautiful house in
Devonshire for tea."

Lindsay gave a loud hoot of laughter, but her grin
became a grimace as she shuddered, remembering how the groom had lasciviously
pressed his girth to Druella's slight frame after Corisande's father, the
Reverend Joseph Easton, had pronounced them man and wife at the small church
wedding yesterday morning. The disgusting man had practically been drooling
onto his boots!

"Druella's won herself a marvelous big house and
hundreds of pounds a year, truly. Each night at bedtime she'll likely wish she'd
settled for less coin when that great white whale of a husband flops under the
covers with her and demands his due!"

Lindsay caught Corisande's outstretched hand, her
dearest friend's own grimace melting into mirth as she pulled Lindsay to her
feet. Arm in arm, they set out once more along the cliff, the strong late March
breeze, laced with salt spray and smelling of the sea and the lush promise of
spring, whipping their hair around their faces.

Corisande was never shocked by anything Lindsay said or
did, and Lindsay loved her for it. There had been so many times she had escaped
the oppressiveness of her beleaguered father's manor for the comforting chaos
of the Easton parsonage where she could be herself without any fear of rebuke.
Just as she had fled this morning, climbing out a dining-room window when she
heard Olympia trumpeting her name from an upstairs bedroom.

Heaven help her, she'd be damned if she spent her last
day at home being lectured on the proper decorum for a young lady about to
embark on her first Season! Not when her father's elder sister, Winifred, Lady
Penney, had no doubt been directed to torment her with the same rules and
regulations once she reached London.

Sobering at the thought, Lindsay sighed as she glanced
at Corisande. "I know I've nearly hounded you to death, but it's not too
late for you to come with me. We'd have the most marvelous time! I'll just tell
Olympia" —even saying the woman's name was distasteful to Lindsay, who had
never once been able to call her father's wife "Mother" — "well,
I'll tell her that you could be another chaperone for me in case Aunt Winnie
grows weary of all the balls—"

"You know I can't go," Corisande interrupted
gently, trying not to be affected by the disappointment shining in Lindsay's
blue eyes.
Cerulean
blue, her wildly
imaginative friend liked to call them, not out of vanity but simply because she
enjoyed the sound of the exotic word upon her tongue.

In fact, Lindsay Somerset didn't have a vain bone in
her body, an amazing thing considering she was one of the loveliest young women
in Cornwall. Her flawless skin, waist-length blond hair that was practically
white,
and hourglass figure were the stuff of King Arthur's
legends. No, if anything, her only fault lay in her being too kindhearted for
her own good.

Lindsay had earned Olympia's heated censure countless
times when she had been caught taking food from the Somerset pantry to feed the
parish's hungry tinners and their families, or been discovered selling her own
shoes to purchase coal to warm some unfortunate soul's freezing cottage.

Corisande's causes had become Lindsay's; Corisande
couldn't have wished for a friend more loyal and true. Yet Lindsay's life would
have been much easier under Lady Somerset's roof if she'd been less caring. For
that reason, for Lindsay's sake, Corisande was almost relieved to see her go.

"If you're thinking you can't go because you haven't
the money," Lindsay began, clearly making one last valiant attempt to sway
her, "I already told you I would share everything I have—"

"It's not the money," Corie broke in again,
though, in truth, as a vicar's daughter she had virtually no coin to her name.

"Well, don't dare tell me it's because you wouldn't
fit in," Lindsay said with reproach, her beautiful sky-blue eyes flashing
now. "You're so pigheaded, Corie Easton!"

"Maybe so, but you're worse. Complicated,
uncompromising, and full of the silliest notions. Like only pretty girls should
go to London. You're pretty, Corie, prettier than most no matter—"

"And you've always been far too generous when it
comes to judging your friends," Corisande cut in, the back of her hand
brushing against the pale, grooved scar bisecting her cheek as she swept
windblown hair out of her eyes. Wanting to change a subject that didn't bother
her nearly as much as Lindsay thought it did, she added, "London is no
place for someone like me. I wouldn't know what to do with myself there."

"You could have fun. See new things, meet new
people, have wonderful adventures—oh, I can't wait to get to London!"

Corisande was glad to see that excitement now lit
Lindsay's lovely face, her friend's eyes dancing with anticipation. Lord help
her, if Lady Somerset did anything now to thwart Lindsay's dreams, Corisande
couldn't say what she might do.

At the very least, she'd give that insufferable woman a
tongue-lashing sure to straighten her sausage curls, something she'd longed to
do for years, although Lindsay had prevented her every time. Lindsay simply
loved her father too much to make his life any more miserable than it already
was, again giving little thought to herself.

Just as Lindsay was doing now, insisting that Corisande
accompany her even though she knew that Lady Somerset would never approve. If
Corisande stepped one foot into that coach, Lady Somerset would have just the
ammunition she needed to cancel the entire journey. Corisande's friendship with
Lindsay had always been a thorn in the old bat's side, Corisande's zealous
determination to help the parish's poor and needy hardly a pastime Lady
Somerset considered suitable for a baronet's daughter.

Summer's Need by Ann Mayburn
Halo (Blood and Fire Series (A Young Adult Dystopian Series)) by Rose, Frankie
New Hope for the Dead by Charles Willeford
An Act of Obsession (Acts of Honor Book 3) by K.C. Lynn
Death of a Showgirl by Tobias Jones
Remember to Breathe (Book One of the True Desires Series) by Finas, A.G.
The Bigger They Are… (Lovers on the Fringe, Book Two) by Julian, Stephanie
Heart of the Mountain Man by William W. Johnstone
Marriage With Benefits by Kat Cantrell
Kick (The Jenkins Cycle Book 1) by John L. Monk
Our partner