Before you get in the money, your chips will not change in value much because none of the money has been taken out of the prize pool. Winning a tournament has been referred to as the worst bad beat in poker because if you win a $10,000 buy-in tournament with 300 people, you will usually win around $1,000,000, not the full $3,000,000 prize pool. Because of this, before you get in the money, you should play fairly standard poker and not do anything based purely on the prize payouts.

Poker tournaments constitute one of the most profitable forms of poker for a few reasons. The primary reason is that if you have an edge, it compounds over time to become a huge edge. If you have 70-percent equity every time you get all-in, you will find all the money coming to you quickly. Compare this to casinos that run off a 1-percent edge. If they can survive on 1 percent, then surviving on 20 percent, even in the short run of a poker tournament, is quite possible.

Another reason poker tournaments are so profitable is that most amateurs in a tournament play to get in the money and not to win the tournament. Most people feel that they have accomplished something when they win some money, even if it is only their initial buy-in. When you buy into a tournament, for all practical purposes, that money is gone. Your eyes should be on first prize, not getting a little money back.

Poker tournaments are also profitable because they draw a huge number of relatively inexperienced players. If you are playing a high-stakes cash game, usually there are one or two weak players at the table. In a high-stakes tournament, there could easily be five or six weak players at every table. Amateur players are considered weak, but so are some professionals. Most cash-game players only know how to play with deep stacks. They lose a lot of equity in the late stages of a tournament by failing to go all-in optimally. Online tournament players usually are bad at playing deep-stacked because online tournaments are primarily an all-in pre-flop game. Most lose a lot of equity early in a tournament because they don’t know how to play deep-stacked.

A well-rounded tournament professional has an edge on most players, even if they are world-class at one specific form of poker. This book will help you become proficient with all stack sizes in every situation. Once you master everything taught in this book, you will be one of the great players, with an edge in every situation.

Before you learn to sprint at full speed, which you will be doing by the end of this book, you must learn to walk. I am going to assume you can barely crawl in these first few chapters, as you must know the basics of poker. Every house has a strong foundation. I want to make sure you know what you are doing so you can come up with the optimal play in every situation at the table. Even if you memorize everything in this book, you will eventually run into spots that are not covered because poker is such a complex game. Learning the basics will help you to think for yourself and make sound decisions in the future.

Do Not Get Stuck on Formulas

I used to love math in high school, but as I started reading poker books, the math became rather boring to me. I have coached numerous players that also say they fail to understand poker because they do not understand the math. While you need to do some basic things, like figuring out implied odds, counting the pot and converting your stack size into big blinds, the other math is largely irrelevant as long as you know the principle that each equation teaches. If you read a formula and do not understand the math, simply keep reading and I will explain the concept.

When I play poker, I do very few calculations in my head. Instead, I have learned what to do in most every situation so it has become second nature to me. For example, say you are playing in a tournament and you flop the nut-flush draw with an overcard. Assuming the stacks are around 40 big blinds (BBs), no matter what happens, you should try to get all the money in on the flop, as you will usually have enough equity in the pot plus fold equity to make getting all-in profitable, assuming you are the aggressor. Having to add the 40-percent chance you will improve to the best hand plus the 70-percent chance your opponent will fold to your aggression, while trying to figure out his range doesn’t really do you much good. So, while you don’t have to know the exact math involved in a hand, you do need to learn the concepts that come from the math.

What to Think about in a Hand

One of the major differences between professionals and amateurs is how they think about a poker hand. Amateurs tend to miss most of the important details about a hand, only thinking about their two cards. One of my amateur friends talks to me about hands from time to time. He usually says something like, “I had aces and raised and my opponent went all-in, so I called and he had pocket sixes. He hit his six on the turn and I lost.” Sometimes I investigate further and find that he actually min-raised pre-flop, bet tiny on the flop, and then went all-in over his opponent’s raise on the turn when he hit the set. The way a professional would have described the same hand would have been “I min-raised aces out of my hundred-big-blind stack from early position and the button, who had more chips than me, called. The flop came J-4-2, I bet 1/3 pot and my opponent called. The turn was a 6. I bet 1/2 pot, my opponent raised to three times my bet and I went all-in. He had 6-6 and I lost.” If you don’t see the numerous mistakes my amateur friend made throughout this hand, that’s alright. By the time you finish this book, his errors will be clear.

Pretty much every poker hand you play will be fairly complex. Simply put, you need to be thinking about your hand, your opponent’s range of hands, what your opponent thinks is your range of hands, the blinds, your chip stack, everyone else’s chip stacks, what level of the tournament you are in, your image, everyone else’s image, the prize structure, the pot odds, your expected value in the tournament, your opponent’s tells, and hiding your own tells. Some things, such as reading the board, calculating pot odds and knowing the remaining stack sizes will, and must, become second nature. Suppose you have 9 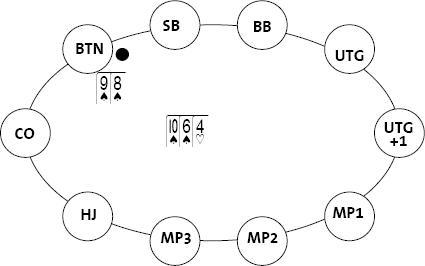 You should instantly see this board and know you have a gutshot and a flush draw. You should also instantly know you have around 43-percent equity against most hand ranges. Things like this will not even be addressed because they should be known like the back of your hand. If you do not know how much equity each hand type has, I suggest you spend some time playing with a poker hand equity calculator. The one I use most often is online at
www.pokerstove.com
.

Numerous other aspects of a hand come into play as well. These will be addressed throughout this book. I will help you learn to think about all these concepts like a pro so you can play like a pro.

Now You See It by Jane Tesh
Diana by Bill Adler
Multiples of Six by Andy Rane
Hopelessly Imperfect (Imperfect #1) by Gabriela Cabezut
Foley Is Good: -- and the Real World Is Faker Than Wrestling by Mick Foley
The Fallen Curtain by Ruth Rendell
Earth Colors by Sarah Andrews
Toward the Sound of Chaos by Carmen Jenner
Following the Grass by Harry Sinclair Drago
04c Dreams of Fire and Gods: Gods by Erich, James
Our partner