Read Secrets of the Deep Online

Secrets of the Deep 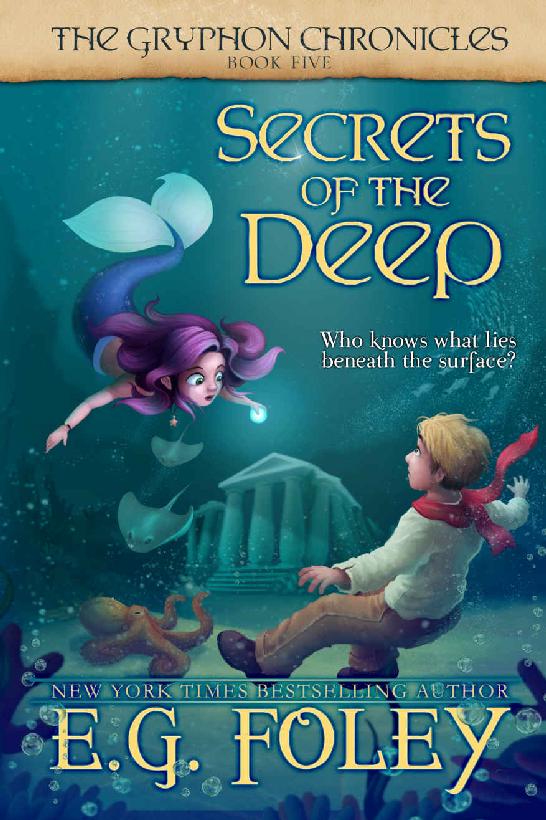 Secrets of the Deep (The Gryphon Chronicles, Book 5)

CHAPTER 8. Catch of the Day

CHAPTER 10. Under the Sea

CHAPTER 14. The Rest of the Story

CHAPTER 30. Calm Before the Storm

CHAPTER 32. Blood in the Water

CHAPTER 33. Reunions and a Reward

SECRETS OF THE DEEP

In a single day and night of misfortune, the island of Atlantis disappeared in the depths of the sea.

Around him, unseen throughout the wooded grounds of Griffon Castle, flocks of birds screeched and clamored almost angrily for sunrise. Dew dripped off the spider webs. An eerie morning fog hung over the broad lawn. The wafting curls of mist, indeed, the whole atmosphere churned with unseen threat, and Jake was eager to be gone.

For a long moment, he stared earnestly at the locked iron grate between the pillars of Lord and Lady Griffon’s stately tomb.

He wished he could somehow surmount this implacable barrier between them, the living and the dead, but it was impossible. So, hat in hand, he just lowered his head.

“Well, Mum, Dad,” he forced out at length with a resolute but rather painful smile, “I just wanted to pay my respects before we leave on this supposed Grand Tour. I don’t know where we’re going, exactly, or when we might be back, but you needn’t worry. Aunt Ramona’s taking us someplace the Dark Druids will never think to look for us. Well—mainly me,” he added in a taut whisper. “I’m the one who started all the trouble. And, er, well, now it seems they sorta want to kill me.”

But as the ever-burning memorial flame in front of the mausoleum sent shadows twisting like phantoms over its mossy marble doors, there was still no sign that his parents could even hear him.

As always, no answer. Jake clenched his jaw. Blast it, what good was it being able to communicate with spirits when the dead you most wanted to talk to never showed themselves?
Where are you?
Why do you always ignore me?
Am I such a disappointment?

He squared his shoulders, though, and reminded himself he had survived without them just fine for most of his life. He managed to nod. “Very well,” he said in answer to their continued silence. “I can understand why you’d disapprove of me. Yes, I might’ve been a thief for a while to survive. But at least I’m not a coward,” he added in a fierce whisper, staring hard at the shadows as if to challenge them.

“I’m not afraid,” he vowed. “You think I
want
to go to ground somewhere? Of course not. I’d rather fight than hide, same as you. Same as Derek, o-or Tex. But the Elders won’t let me. They say I’m just a kid.”

He glared at the tree-shaped insignia of the Order his parents had served so bravely. It was carved above the mausoleum doors, below the gryphon rampant of the Everton family crest.

“But so be it,” Jake conceded in resentment. “After all, I’ve got to think about the others.”

With a restless glance toward the drive, he saw his sleepy fellow travelers up and dressed and carrying the last of their things out to the two heavy-laden carriages parked in front of Griffon Castle.

Under a mound of traveling trunks strapped to the roof of each, the coaches waited to take them to the coast, where they would then board a ship across the Channel to start their Grand Tour, pretending all the while that they were not going into hiding and running for their lives, but merely off on holiday.

Ah well. Despite their pretense, all six kids going on the journey understood the threat just as well as their two adult chaperones. That didn’t stop any of them from being excited about the famous sights they’d see along the way.

Even better, Great-Great Aunt Ramona had promised to end their wanderings at some fancy seaside villa, where they would lie low in luxury until it was safe to return to England.

Even though Jake knew it would be fun, he hated knowing that
his
actions, his stubborn decision to destroy Garnock the Sorcerer in Wales, had turned everyone he cared about into targets for a cult of evil warlocks.

Blimey
. He shook his head and heaved a grim sigh. Well, it was a little late now to be finally thinking about the consequences, wasn’t it?

As his best mate and cousin, Archie Bradford, the boy genius, had summed it up recently in a philosophical mood:
“It’s Newton’s Third Law, coz. For every action, there is an equal and opposite reaction.”

But if Jake had known at the time that his blowing up Garnock might become the opening salvo in a great magical war between the Order of the Yew Tree and its age-old enemies, the Dark Druids, he probably never would’ve done it.

And frankly, his getting murdered for the deed might be the best-case scenario.

Yet there was hope even now that war might still be avoided.

Jake’s rugged idol, Guardian Derek Stone and that wild cowboy, the American Lightrider, Agent Josephus Munroe, better known as Tex, were out there somewhere on a spy mission with Aleeyah the Djinni, trying to figure out exactly what the Dark Druids were up to.

Even the kids’ shapeshifting tutor, Henry du Val, had been sent off to take part in the effort. Henry had gone to faraway forests ruled by the dashing vampire double agent Prince Janos, to listen in his wolf form for any whispers amongst the bad-leaning species of wild animals—wolves, bats, ravens, snakes. Some of them might have information, and Henry was tasked with sniffing out any clues.

Poor Miss Helena,
Jake thought with a frown. He really didn’t know how the girls’ elegant governess could stand to look at him these days, considering that Henry was her twin brother and Derek was her beau.

If anything happened to either man all because of
his
actions, Jake knew he couldn’t live with himself.

As it was, he had to remind himself continually of what Derek had said to him before he’d left: that it wasn’t
really
his fault. That the Dark Druids had been looking for any excuse to renew hostilities for a very long time. They’d never be happy until they controlled the whole Earth, Derek had said. The Order of the Yew Tree had always stopped them, and always would. Nevertheless, every hundred years or so, the blackguards took it into their twisted minds to try yet again.

Any semblance of a reason would have sufficed, Derek had assured him with a fatherly squeeze on the shoulder before he’d gone.

Jake just wished
he
hadn’t been the one to give it to them.

“Jacob!” Great-Great Aunt Ramona called sternly just then from across the sweeping lawn.

He turned, and with the predawn darkness beginning to fade to gray, could just make out her tall, prim, very proper figure.

The Dowager Baroness Bradford was no ordinary aristocratic old dragon lady. She also happened to be a powerful white witch, and an honorary Elder of the Order. “Come and make sure you have all your things,” she commanded. “We’ll be leaving in a trice!”

“Yes, ma’am! Be right there,” he shouted back, then turned hesitantly one last time to his parents’ ornate tomb.

Considering he might not make it back alive, this seemed like the closest chance he’d ever get to give them a proper goodbye. Then again, he might be joining them pretty soon in there if he didn’t watch his back.

“Right. Well, we’re off, then,” he murmured. “Like I said, no need to worry about me. Aunt Ramona’s got everything in hand. The ol’ girl’s sworn to keep us safe, even if she has to use magic again, and you know how she feels about that.”

“So, if you have any parting advice for your son,” he added hopefully, “now’s the time. I’m listening… Dani says I never listen, but if there’s anything at all you’d like to say to me…”

Jake closed his eyes, waiting with his supernatural senses finely attuned for any subtle answer.

When still none came, he flicked his blue eyes open angrily and lifted his gaze to the dark dome of the sky, feeling unspeakably abandoned—and rather enraged at his parents. Honestly, was Heaven so comfy that the earl and countess, dead for over a decade, couldn’t be bothered to spare him one moment of their shining blasted eternity?

True, he admitted, Dr. Celestus had said they might not be
allowed
to visit him like other ghosts did once they had fully crossed over. And that one would know, since the mild-mannered,
seemingly
human physician had turned out to be a bona fide angel, wings and all.

Oh, forget it,
Jake thought, turning away. He could barely remember his parents, anyway.

With that, he stalked away, but he must’ve been more on edge about the looming threat than he’d realized, for when the greenery nearby suddenly rustled, he nearly jumped out of his skin.

He reached at once for the magical dagger at his side, Risker—but it wasn’t some assassin of the dark arts come to murder him.

“Blimey, Red! You nearly made my heart stop,” Jake muttered, clutching his chest with a belated chuckle.

“Caw?” The family Gryphon tilted his head as he prowled out of the leafy shadows, a magnificent, graceful, lion-sized version of the carved one above the mausoleum doors.

His heart still pounding, Jake welcomed the noble beast with a smile and threw an arm across his neck where the feathery part of Red’s head met the tawny fur of his lion body. “Come on, boy, you can walk me to the carriage.”

“Aye, I’m going to miss you, too. But don’t worry; you’ll be joining us soon. It’s not like we can take you with us traipsing through museums and cathedrals. Once we’ve seen the sights and get to wherever it is we’ll be staying, one of the Lightriders will bring you to me through a portal, all right?”

“Jake!” a high-pitched voice piped up from the drive before the castle entrance. “Hurry
up
! You’ll make us miss the ship!” Dani O’Dell held up what appeared to be some sort of tin. “I’ve got snacks!”

His lips flattened into a sardonic line. “She always knows how to bribe me,” he remarked to Red, then called back, “I’ll be right there!”

After Dani had bounded up into the first carriage, Jake looked wryly at Red. “Well, you heard the carrot-head. Guess I’d better step to it.”

Scarlet Devices by Delphine Dryden
The Oath by John Lescroart
Embrace The Night by Ware, Joss
A Decadent Way to Die by G.A. McKevett
Citizen of the Galaxy by Robert A. Heinlein
The Drowning Spool (A Needlecraft Mystery) by Ferris, Monica
Masters 02 Master of the Abyss by Cherise Sinclair
Six Women of Salem by Marilynne K. Roach
Stattin Station by David Downing
Half Discovered Wings by David Brookes
Our partner