Secrets of the Jaguar (Crimson Romance) 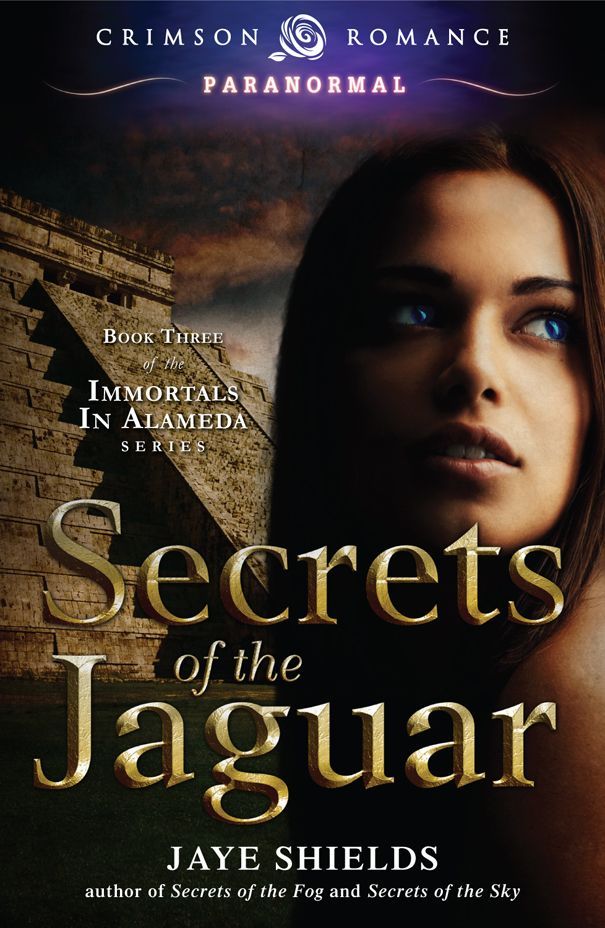 Every book I write is dedicated to my family.

I am so fortunate to have a family that supports me in whatever I pursue and give me the strength to never doubt myself.

To my Grandma, who I took across Mexico climbing pyramids and venturing into pitch-black caves and maze-like temples
. Secrets of the Jaguar
is for you.

I love you, Grandma.

More from This Author

To Jennifer Lawler and Julie Sturgeon, the two lovely ladies behind me at Crimson Romance, thank you so much for believing in me.
Secrets of the Jaguar
was the first book I ever wrote and I can’t thank you enough for helping me bring it to life.

Michelle lowered her chin deeper into the scarf tucked around her neck. The San Francisco winds tickled her cheeks. It was a chilly night as usual on the island of Alameda. Hidden beneath the bright blue pea coat she had donned for her walk, goose bumps formed on her arms.

Was the eerie sensation from the weather?

Or had the feds finally found her?

Caution drifted through her senses and she pulled her mp3 player out to press pause as she quickened her pace. But there was no disturbance. The only sound was her footsteps padding against the cement as she walked down the avenue lined with old Victorian houses. She walked the quaint streets nearly every night, basking in either the sunset or the moonlight, always only with her music and the neighborhood cats to keep her company. Content with the silence of the night, she glanced behind her to prove to her cowardly intuition that indeed, nothing was amiss.

Soon the darkness that accompanied the beach enveloped Michelle. Her boots passed from the cement to the scraggily boardwalk that disappeared into the sand. Her viking-esque black boots landed heavily in the sand. She enjoyed the sway of her own body as the sand guided her to and fro as she made her way to her favorite spot to take in the night.

The move to Alameda had been necessary to escape the nightmare that had been life and college in the Central Valley. Her otherworldly … situation … had caused her family to not only forsake her, but threaten her life. She grimaced at the memories that burrowed deep inside, but she walked on confidently.

Soon she reached the rain-dampened dirt path that led through the inlet. It was here in this secluded corner of Alameda where she received the solace she craved, and yet still found comfort in the lights of the city in the distance, in the owls that prowled overhead, and the hundreds of birds that called the muddy estuary home. The soft croons of Bon Iver echoed from her iPod as she reached the small pier. Sitting atop the wooden rail, she was elevated enough to look over the whole estuary and take in the glittering lights of San Francisco and the dark purple length of cloud that hung just above the city outline.

“A penny for your thoughts.”

Her head whipped toward the low, cocky, and highly unexpected voice. The silhouette of the man was dark, but she could see that he was quite comfortably lying on the bench. She wondered just how long he had been there gazing up at the stars.
Did I walk right by him?

She looked back toward the city lights in the distance and said plainly, “Just enjoying the view.” The shyness she felt was reflected in a cold, uninterested tone.

The soft, bass voice spoke again, and she struggled to understand whether it was a question or a statement.
I wonder if he does that on purpose
. Too timid to look at him, she kept her gaze on the distance. She wondered what he looked like. His voice was low, as if very relaxed, and the subtle tone of entertainment in his words made her believe he might be young.

“
A dime for your thoughts.”
And apparently he had a fondness of old clichés.

This time she did look over to the stranger who continued to fire questions at her. From under the hood of his gray sweater, she took in his face and was enthralled. Her animalistic instincts had her stomach twirling in circles.

Dark hair jutted out against his cheeks, and his jaw was hard-set and still, almost as if he wasn’t breathing. Large, dark eyes pierced into her.
Like a gypsy.
Her mind went blank beyond that and she realized he was still waiting on her. She whipped her head in the opposite direction, desperately trying to shed the stalker gaze she had fixed on the handsome stranger.

The low voice spoke again. “I’m sorry, you probably came here to be alone, I was going to head home before it rains anyway. Good evening.”

Michelle finally took out one of her earbuds, determined to apologize. When she opened her mouth, it was too late — he was already gone.
She told herself that it was probably just the darkness that consumed him.

Ping.
A raindrop splattered against her coat. With a glance at the sky, Michelle tugged the hood of her sweater up from underneath her jacket. The oversized black hood crowded her cheeks and framed her view of the San Francisco lights permeating the darkness in the distance. She breathed in deeply and exhaled with a sense of ecstasy. The smoky dampness swirling in the wind was titillating. Her favorite scent of anise rising from the estuary on the cold night air soothed her jangled nerves, making her glad that her sense of smell was a notch higher than a simple human’s.

She jumped down from her perch on the wooden railing and strolled from the pier to the dirt path. Walking through the estuary, she paused, and curled down to the ground. Once again she inhaled deeply, bringing her palms to the ground, curling her fingers into the dampness of the dirt. Perhaps it was the jaguar inside her, but she savored every sense, the texture of the ground, and the soft grainy moss that sizzled against the pads of her fingers. Sighing with bliss, she stood and started the walk back home.

From within the many crevices the darkness offered, Duncan watched the girl. Almost every night for the past couple weeks, she came to the estuary and stared into the night for lengths of time that most humans did not. Normally he kept a distance from her, but tonight he couldn’t help but indulge his curiosity.

From up close, he realized that she was more beautiful than he had previously thought. She smelled of lemons and jasmine, and her lips were full and rosy, chapped from the chill of the wind. He also sensed a mischievous, predatory essence around her, and for this reason he followed her as she walked home, ensuring her safety.

The young woman never once suspected he was following, and if she turned to look, all she would see would be darkness. His parents never suspected when they named him Duncan, dark one, for his dark hair and eyes that one day he truly would become a “dark one.”

But tonight he was only lightness and curiosity after his closer encounter with the estuary amazon whose eyes matched her bright blue coat. Her gaze had been wide as she stared at him through the darkness, and while he knew she was intrigued by him, the feeling was mutual.

Especially now as he watched her sink her hands into the dirt path lined with anise and other abundant foliage. The way the woman bowed down against the ground and curled her fingers into the dirt stirred his blood with desire. For a moment, he imagined her raking the same delicate fingers against his body.

But as rain drizzled all around her, she represented all that was life, and Duncan was heartbroken. At least he thought that was what the feeling was.

He glanced around the night, seeking the source of the low-lying evil that dotted his senses. He saw nothing, so he silently followed the girl as she made her way through the night, walking along the beach, swaying with the sounds of her mp3 player. He enjoyed watching her navigate along the path as she strolled from the beach to the sidewalk of her neighborhood.

Despite the subtle feeling of malice still lingering in his senses, he watched as his beautiful stranger arrived at a Victorian house. He already knew she lived on the second floor in a studio apartment. He’d followed her here once before, trailing a similar aura of mischief, afraid that someone else might have been following her.

But again all seemed normal in the quaint town of Alameda. The large, stained glass door of the house shut softly and he listened to her footsteps climbing the interior stairwell. An acute sense of hearing had served him well during his lifetime thus far, and he relaxed a little as the predatory presence he had felt dwindled away and there was only calm.

As Duncan watched the house, he recalled walking the avenues years ago as a teen. Alameda had definitely been a bustling place then. Instead of multiple units, many of these Victorian-era style houses had been lavish vacation homes for the wealthy who came to visit the island and get away from the big city. It was in a grand estate like the one before him where he had attended the lavish party that altered his life forever.

Duncan recalled the last days of his human life. It had been at the Meyer house in 1915, his home at 2021 Alameda Street. The Colonial Revival house had been built in 1897. The railroad caused quite a housing boom in Alameda, and in 1890, just two years before Duncan was born, more than three hundred houses were constructed on the island. Now his childhood home stood in the same light of its former glory. The two-story house was massive and boxy like many Colonial Revivals popular at the time. The home sat proudly with an elegant covered porch and a matching terrace on the level above, accompanied on both levels by bay windows.

Many evenings Duncan had sat with his mother, playing piano for her with light streaming through those windows. Now in the darkness of night, the American flag hung quietly from its perch above the entrance to the home, and the brightness of the lavender wisteria made him long for his mother’s company. But she had long since passed.

After reaching adulthood in the stately home, Duncan was twenty-three years old and unwilling to take the reins of his father’s shipping company. Instead, he wanted with all his heart to pursue a career in music. He never felt as free as when he was playing piano, his long fingers gliding from key to key, expelling hypnotic hymns. His mother had taught him, but his father became furious that Duncan’s past time had evolved into his desired profession.