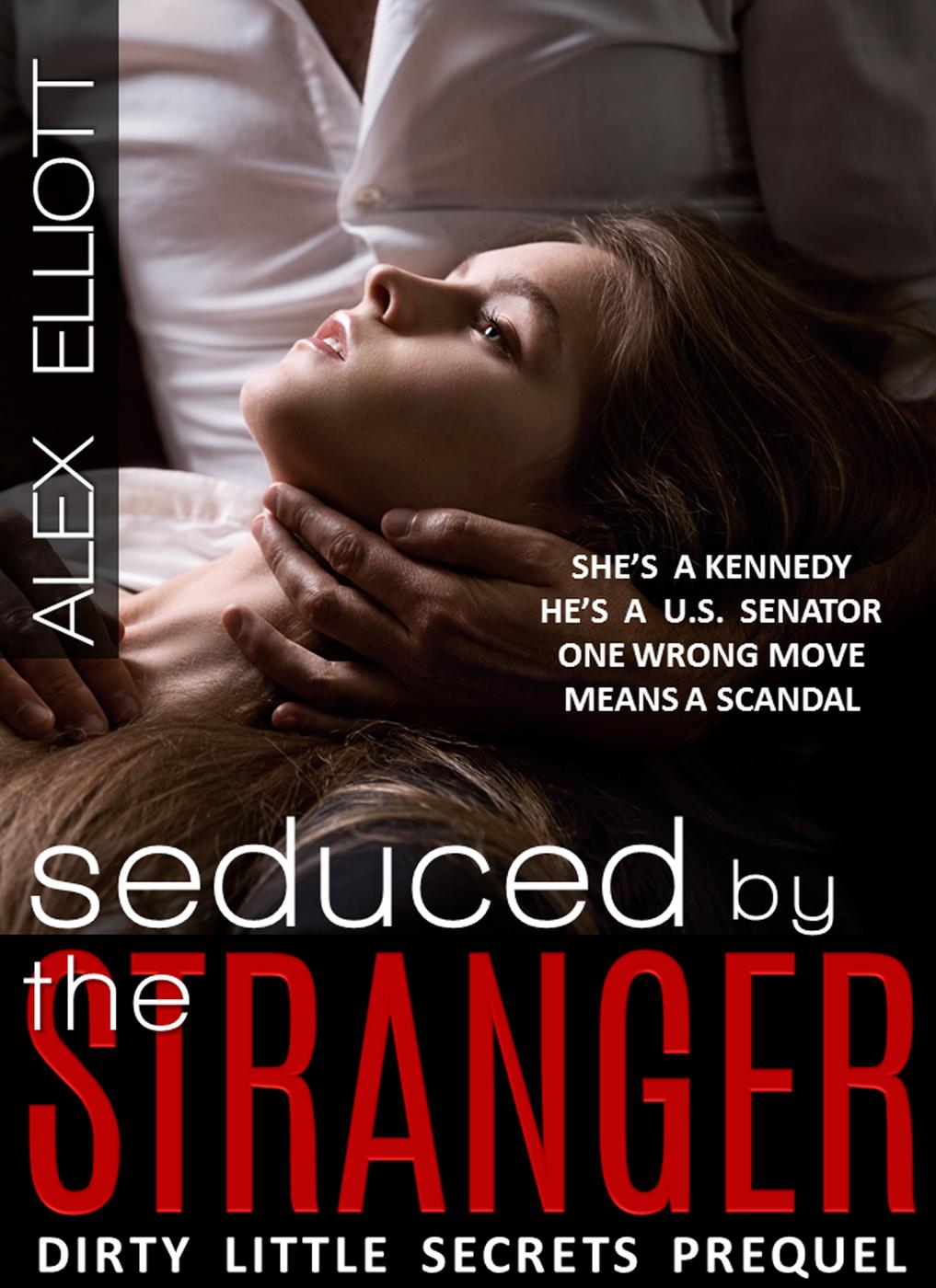 SEDUCED BY THE SENATOR
is a work of fiction. Names including the reference to historical figures, characters, places, organizations, business and incidents are either products of the author’s imagination or are used fictitiously. Any resemblance to actual events, locales, or persons, living or dead, is entirely coincidental. The author makes no claims to, but instead acknowledges the trademarked status and trademark owners of the word marks mentioned in this work of fiction.

SEDUCED BY THE SENATOR by Alex Elliott

Seduced By The Stranger Prequel

Seduced By The Senator Book 1

Affianced To The Veep Book 3

The House On The Hill Book 4

“The marks humans leave are too often scars.”

― John Green, The Fault in Our Stars

ABOUT SEDUCED BY THE STRANGER

It’s the prequel to

SEDUCED BY THE SENATOR

A fairy tale for girls who crave dark, twisted

A story about lust... 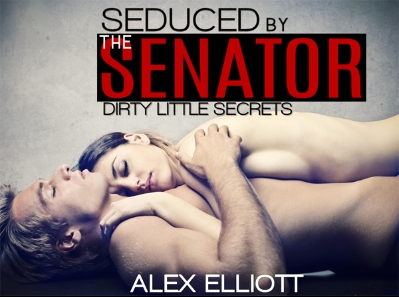 After one Nantucket cocktail party too many, Xavia Kennedy is ready to bail from Boston. She’s hungry for freedom, far away from her elitist and famous family with their overbearing expectations. When she’s given the opportunity to intern for the hottest senator this side of D.C., she doesn’t walk, she runs, willing to do whatever is required to secure her spot on the congressman’s campaign trail.

He’s a mystery. Complicated. Ben doesn’t date, doesn’t screw around; he committed to his Capitol seat. But don’t be fooled by appearances. Sure, he’s gorgeous, rich, charming, but Ben’s got a dirty little secret.

One that he keeps hidden. Unless he’s back at the ‘House.’ A secret society where he exorcises his craving for hardcore encounters in a private club he owns and runs with other likeminded congressmen from the Hill.

When he encounters Xavia, he walks away the first time. She’s a door marked ‘X’ for all the right reasons. But when she ends up on his team as his newest intern, he’s caught between a rock and a hard place on his last campaign stop. One that proves to be a doorway to decadence or the road to ruin, neither he nor Xavia can resist.

TOGETHER THEY’RE GOING TO MAKE HISTORY!

The Fall Should Always Be Fast...Memorable

S
ECRETS. SECRETS. Are no fun... Patently untrue propaganda. And in my world, that’s precisely how I get by. I was born to a mother who refuses to divulge my father’s identity, and adopted by Mom’s husband number three. A Kennedy. You know the ones. Like my mom, I keep my intimate details on lockdown, akin to some miser of minutiae. I’ve learned to be greedy with personal information out of necessity, and what’s the saying? Necessity is the mother of invention. Well that rings true, especially in my family.

“Let’s do another round!” Brooke drums her hands on the table. She just returned from dancing, and sinks onto the chair next to me.

“How about peppermint schnapps?” Rowena suggests.

“One more drink? Can’t hurt,” I say in response to the proposition of doing another shot of pretty-colored liquor. We’ve done everything from Alabama Slammers, a round of fireballs to flaming B-52's, and fine. One more.

Brooke orders singles this time. “Anyone up for a bump?” She pulls out a vial of coke, but I shake my head.

We’re seated upstairs, overlooking the dance floor in a club her uncle owns. Wall-to-wall people crowd the place with a line outside, and security up the wazoo. Techno thunders from the speakers, and I can’t resist tapping my foot.

“Isn’t that George Clooney?” Rowena asks, pointing to a man with an attractive woman.

Katrina pulls my hand and shouts, “Xavia! Come dance with me!”

I shift my focus to the dance floor, then pensively glance over at my friend. “If you promise not to step on my toes.” I raise the shot glass placed in front of me.

“To getting laid.” Brooke clinks my glass, then I tap everyone else’s before tossing back the shot.

Both Kat and I rise on heels that should come with a warning against drinking and dancing.

“This is my favorite song!” she declares.

“You’ve said that at least three times,” I admonish her but laugh as we descend the stairs, and blow through the crowd toward the dance floor.

Four of us flew down to New York for the weekend. We’re hanging out in Brooke’s dad’s brownstone, clubbing all night, and I don’t care that within the last two days, I’ve downed several liters of alcohol. It’s June, classes are over, I’m twenty-four, and for once, I’m not going to sit and worry about my future. Not when there’s a bounty of handsome men around who smile at me, beguiling enough to make even me believe that I could do something crazy...say, ditch my friends in a New York City second, and lose myself.

When in Rome—am I right?

The men giving me a once over have no idea who I am, and don’t frigging care! That’s why I love escaping Boston and getting lost.

“Don’t want to miss the best part.” Katrina doesn’t stop until we’re out in the middle of the dance floor. Soon afterward, she’s sandwiched between two guys and shouts, “Come join us!”

“I’m good.” I close my eyes. This is what it’s like to be free! I lift my arms, swivel my hips, the music blaring all around...and when I open my eyes, I see him. From flying high, I’m tumbling fast.

I stare across the dance floor at a man. More like some mythical hunter... Orion.

I shiver from his power. Projected. It’s his eyes.

Obliterate my next thought and the one after that one.

I swallow, and gather he’s not just some run-of-the-mill handsome hunk. He’s got this stare that slices through the bodies gyrating next to me, and right into the center of my being. I want to look away—Christ, I tell myself—look the hell away...but I can’t. Instead of being mortified that Mr. Gorgeous is staring holes in me, I’m excited. He’s seated maybe twenty feet away, behind the cordoned off VIP area at a table with three other men—all of them in suits. He doesn’t seem to be focused on their animated conversation. No, he’s zoning in on one target...me.

He lifts a glass to his mouth, and over the rim, he watches me dance. There’s something so familiar about him. No way could I have met him at one of my family’s parties. He’s not only gorgeous—there’s an intensity about him. Proof that I’m caught in a mind-screw-fest as I dance for him—nearly a whole song.

Mesmerized, I let go as though I know what he wants. I don’t feel cheap or sleazy—he makes me want to be daring. Provocative. And in return, I want to tempt him like he’s tempting me. Trailing my fingers down my breasts, I alternate rotating my shoulders slowly to the music, and yes, I imagine that his mouth is on me, drinking between my legs, driving me wild. Best of all, in my fantasy—he doesn’t care who my family is as he forces my legs wider, imprisoning me under him until I forget everything except how insane he makes me feel.

My dress—a tiny scrap of shiny white material—rises up my thighs, the hem tickling my skin. Thank God there are people all around and steamy clouds float up from the floor or the slice of man cake would be getting a shot of how little I’m wearing. And just as I think that thought, the crowds part, and guess who gets an eyeful of me and my dirty dance routine? My admirer leans over, setting his glass down, and I get that his eyes have just gotten a panoramic view of me and the strip of lace I call my thong.

He breaks eye contact. He’s saying something to the men seated with him, and then he’s up and out of his chair. Now, I’m the one leaning to the side, then to the other, wondering is he leaving. I track his movement, my heart thudding, and I’m edging off of the dance floor. He’s a head taller than everyone and easy to spot as he walks from the VIP section. Even in the dimly lit space between the bar and tables overlooking the dance floor, I follow his progress. When he enters a section that is better lit, our gazes reconnect. We’re closer and in that flash, I can’t move. Or think. Or breathe. Tractor beams aren’t this strong or mind warping.

A woman shouts, “Excuse me.”

Shit, I’m frozen, and have to decide, either I can hover at the edge of the dance floor, getting knocked and bashed, or exit. I’m no longer dancing, and without warning my feet direct me toward him. “Okay, wait,” I tell myself. I can’t just head off his progress—he might be headed for the front door.

“You’re quite a dancer,” he says in a deep voice, shaped by a slight Southern accent, and towering like a redwood right in front of me.

For the year it takes for my brain to reconnect, I lift my chin and face him. I say, “Thanks...” and stare in stunned silence.

His gaze pulls the thoughts right out of my head. This impenetrable specimen of a man isn’t like the mama’s boys I’ve known. Up close, I look into his smoky grey-green eyes that don’t just consume, they devour me. He holds off smiling, looking down at me, and slightly cocks his head. Instantly, I want to run my fingers through his thick dark messy hair that frames his chiseled and yes, stunning face. All at once, it’s like the weekend of drinking pretty-colored shots goes straight to my forebrain, and I totter.

“Hey.” His hand shoots out, taking hold of my arm. “You all right?”

His touch isn’t static. His fingers on my arm send a racing jolt that hits me like a rocket, tingling along my skin, then diving deep. A spark of fiery pleasure implodes in my belly. “Uh...It’s kinda crowded. I’m just hot,” I think I say.

I’m beyond charred standing next to him and now with his fingers on my skin, it’s all I can do to stay upright.

“Come talk to me. Over there.” He tugs on my arm, jutting his chin to some invisible place, not that I break eye contact to see where he means.

“Okay. Sure.” I hope I’m speaking and the mute button isn’t pressed. Confirmation.

He leads me to an alcove, down from the dance floor, and one I didn’t know existed. Not that I’ve been to this club before. Thunderstruck, I follow along, his hand on my arm and a tiny voice inside my head, asks the question.
Should I be afraid?
We’re alone and even though he’s wearing an expensive suit, he has the body of someone who clearly doesn’t sit around all day, crunching numbers.

“Why are you dancing alone?” He stares down at me, thoughtfully assessing as he waits for me to say something, I imagine.

Inside the narrow hall, I’m panting and the blood is pounding in my ears. Should I admit that I’m floored that a man who is taller than any jungle gym I’ve encountered, wants to talk?

“Who the heck are you?” I ask not answering his question. My tongue is numb instead of loose from all the drinking, and being this close to an unchecked power source of masculinity—let’s get real—he’s too... I don’t even know a proper term—but he’s
too
.