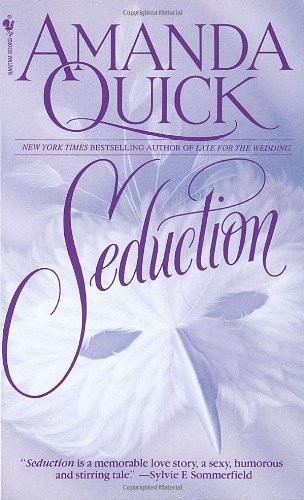 Julian Richard Sinclair, Earl of Ravenwood, listened in stunned disbelief as his

formal offer of marriage was rejected. On the heels of disbelief came a cold,

controlled anger. Who did the lady think she was, he wondered. Unfortunately, he

could not ask her. The lady had chosen to absent herself. Julian's generous

offer was being rejected on her behalf by her obviously uncomfortable

"Devil take it, Ravenwood, I don't like this any better than you do. Thing is,

the girl's not a young chit straight out of the schoolroom," Lord Dorring

explained morosely. "Used to be an amiable little thing. Always eager to please.

developed a considerable will of her own. Dashed annoying at times, but there it

is. Can't just order her about these days."

"I am aware of her age," Julian said dryly. I was led to believe that because of

it she would be a sensible, tractable sort of female."

"Oh, she is," Lord Dorring sputtered. Most definitely she is. Don't mean to

imply otherwise. She's no addle-brained young twit given to hysterics or

anything of that sort." His florid, bewhiskered face was flushed with evident

few years back. Sophy's parents were lost at sea the year she turned seventeen,

you know. She and her sister came to live with us. I'm sure you recall." Lord

Dorring cleared his throat with a cough. "Or perhaps it escaped your notice. You

were somewhat occupied with, uh, other matters at the time."

Other matters being a polite euphemism for finding himself helplessly ensnared

in the coils of a beautiful witch named Elizabeth, Julian reflected. "If your

granddaughter is such a paragon of all the sensible virtues, Dorring, what seems

to be the problem with convincing her to accept my offer?"

together in an unhappy frown. "I fear I've allowed her to read a great deal. And

all the wrong sort of thing, I'm told. But one doesn't tell Sophy what to read,

you know. Can't imagine how any man could accomplish that. More claret,

"Thank you. I believe I could use another glass." Julian eyed his red-faced host

and forced himself to speak calmly. "I confess I do not quite understand,

Dorring. What have Sophy's reading habits got to do with anything?"

"Fear I haven't always kept a close watch on what she was reading," Lord Dorring

muttered, gulping his claret. "Young women pick up notions, you know, if you

don't keep a watch on what they read. But after the death of her sister three

years ago, I didn't want to press Sophy too hard. Her grandmother and I are

quite fond of her. She really is a reasonable girl. Can't think what's gotten

into her head to refuse you. I'm sure she would change her mind if she just had

"You must admit you've rushed things a trifle. Even my wife says that. We tend

to go about this sort of thing more slowly out here in the country. Not used to

town ways, you know. And women, even sensible women, have these damn romantic

notions about how a man ought to go on." Lord Dorring eyed his guest with a

hopeful air. "Perhaps if you could allow her a few more days to consider your

"I would like to talk to Miss Dorring, myself," Julian said.

"Thought I explained. Not in at the moment. Gone out riding. Visits Old Bess on

"I am aware of that. She was informed that I would be calling at three, I

Lord Dorring coughed again to clear his throat. "I, er, believe I mentioned it.

Undoubtedly slipped her mind. You know how young women are." He glanced at the

"Unfortunately, I cannot wait." Julian set down his glass and got to his feet.

"You may inform your granddaughter that I am not a patient man. I had hoped to

get this marriage business settled today."

"I believe she thinks it is settled, my lord," Lord Dorring said sadly.

"You may inform her that I do not consider the matter finished. I will call

again tomorrow at the same time. I would greatly appreciate it, Dorring, if you

would endeavor to remind her of the appointment. I intend to speak to her

personally before this is all over."

"Certainly, by all means, Ravenwood, but I should warn you it ain't always easy

to predict Sophy's comings and goings. As I said, she can be a bit willful at

"Then I expect you to exert a bit of willpower of your own. She's your

granddaughter. If she needs the reins tightened, then, by all means, tighten

"Good God," Dorring muttered with great feeling. "Wish it were that easy."

Julian strode toward the door of the small, faded library and stepped out into

the narrow, dark hall. The butler, dressed in a manner that blended perfectly

house, handed him his tall, flat-crowned beaver hat and gloves.

Julian nodded brusquely and brushed past the elderly retainer. The heels of his

gleaming Hessians rang hollowly on the stone floor. He was already regretting

the time it had taken to dress formally for the unproductive visit.

He'd even had one of the carriages brought around for the occasion. He might as

formal touch to the call. If he'd been on horseback he could have stopped off at

one of the tenants' cottages on the way home and seen to some business. That

way, at least, the entire afternoon would not have been wasted.

"The Abbey," he ordered as the carriage door was opened for him. The coachman,

wearing the green-and-gold Ravenwood livery, touched his hat in acknowledgment

whip an instant after the door was slammed shut. It was understood that the Earl

of Ravenwood was not in a mood to dawdle along country roads this afternoon.

Julian leaned back against the cushions, thrust his booted feet out in front of

him, folded his arms across his chest, and concentrated on controlling his

impatience. It was not an easy task.

It had never occurred to him that his offer of marriage would be rejected. Miss

Sophy Dorring did not stand a chance in hell of getting a better offer, and

everyone involved knew it. Certainly her grandparents were vividly aware of that

granddaughter's hand in marriage a few days ago. As far as they were concerned,

suitable match. Julian's offer was a bolt from a truly benign providence.

Julian's mouth twisted sardonically as he considered the scene that had

undoubtedly ensued when Sophy had informed her grandparents she was not

interested in the marriage. Lord Dorring had obviously not known how to take

charge of the situation and his lady had probably suffered a fit of the vapors.

The granddaughter with the lamentable reading habits had easily emerged the

first place. By rights she should have leapt at Julian's offer along with

everyone else. He was, after all, intending to install her at Ravenwood Abbey as

the Countess of Ravenwood. A twenty-three-year-old country-bred miss with only

dismissed the notion that her choice of reading material was the problem.

attitude toward his orphaned grandchild. Women were quick to take advantage of a

Her age might also be a factor. Julian had considered her years an asset in the

beginning. He'd already had one young, ungovernable wife and one was quite

enough. He'd had sufficient scenes, tantrums, and hysterics from Elizabeth to

last him a lifetime. He had assumed an older female would be more levelheaded

It was not as if the girl had a great deal of choice out in the country, Julian

reminded himself. She would not have all that much choice in town, for that

matter. She definitely was not the type to attract the attention of the jaded

males of the ton. Such men considered themselves connoisseurs of female flesh in

much the same way they considered themselves experts on horseflesh, and they

were not likely to look twice at Sophy.

She was not fashionably extreme in her coloring, being neither strikingly

dark-haired nor angelically blond. He tawny brown curls were a pleasingly rich

shade but they appeared to have a will of their own. Tendrils were always

escaping from beneath her bonnets or straggling free from a painstakingly

She was no Grecian goddess, the look currently fashionable in London, but Julian

admitted to himself that he had no quarrel with her slightly tilted nose, gently

rounded chin, and warm smile. It would be no great task to get into bed with her

frequently enough to ensure himself of an heir.

He was also willing to allow that Sophy had a fine pair of eyes. They were an

interesting and unusual shade of turquoise flecked with gold. It was curious and

Instead of peeking up at a man through her lashes, Sophy had the disconcerting

habit of looking straight at him. There was an open, forthright quality about

difficulty pursuing the elegant art of lying. That fact suited him, too. Picking

Sophy was slender. The popular high-waisted gowns suited her figure but they

tended to emphasize the rather small curves of her breasts. There was, however,

a healthy, vibrant quality about her that Julian appreciated. He did not want a

weakling. Frail women did not do well in childbirth.

that, while he had assessed her physical assets accurately, he had not,

apparently, taken certain aspects of her personality into consideration. He had

never guessed, for example, that beneath that sweet, demure facade, she had a

gratitude. And her willfulness appeared more entrenched than expected. Her

grandparents were obviously distraught and quite helpless against their

granddaughter's unanticipated resistance. If the situation was to be salvaged,

Julian decided, he would have to do it himself.

Ravenwood Abbey. He climbed out of the equipage, stalked up the stone steps, and

began giving low-voiced orders as soon as the door was opened for him.

"Send a message to the stables, Jessup. I want the black saddled and ready in

black-and-white marble-tiled hall and up the massive red-carpeted staircase.

Julian paid little attention to his grand surroundings. Although he had been

raised there, he had cared little for Ravenwood Abbey since the early days of

his marriage to Elizabeth. Once he had felt the same possessive pride toward the

experienced a vague distaste toward his ancestral home. Every time he walked

His land was quite a different matter. No woman could taint the good, rich

fields of Ravenwood or his other estates. A man could count on the land. If he

took care of it, he would be amply rewarded. To preserve the lands for future

Earls of Ravenwood, Julian was willing to make the ultimate sacrifice: he would

oppressively lush, exotically sensuous bedchamber she had once made her own.

One Night with Sole Regret 07 Tease Me by Olivia Cunning
Part of the Pride by Kevin Richardson
Win or Lose by Alex Morgan
Who Was Angela Zendalic by Mary Cavanagh
HMS Marlborough Will Enter Harbour (1947) by Monsarrat, Nicholas
Race Against Time by Christy Barritt
La Hermandad de la Sábana Santa by Julia Navarro
The Private Club 2 by Cooper, J. S., Cooper, Helen
The Renegades (Book 4): Colony by Hunt, Jack
Made in Myrtle Street (Prequel) by B A Lightfoot
Our partner