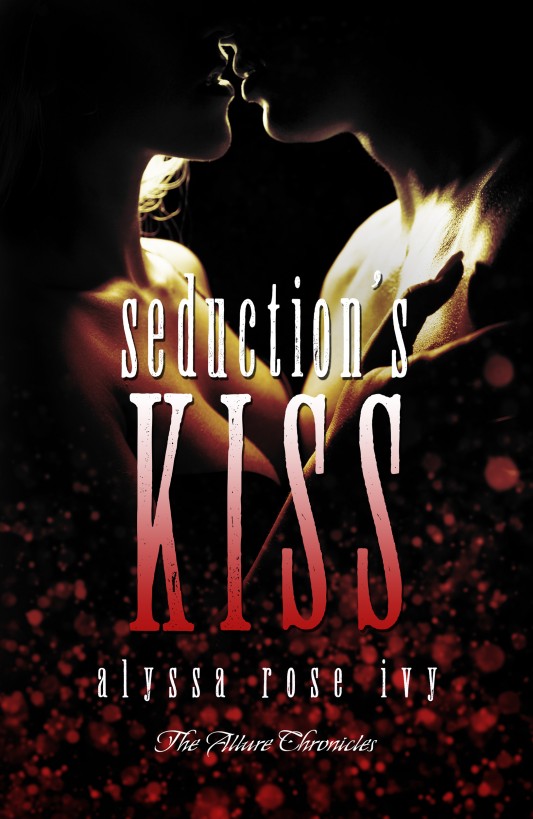 All rights reserved. No
part of this publication may be reproduced, distributed, or
transmitted in any form or by any means, or stored in a database or
retrieval system, without the prior written approval of the
author.

The characters and
events portrayed in this book are fictitious. Any similarity to
real persons, living or dead, is coincidental and not intended by
the author.

Other Books by Alyssa Rose Ivy

The Hazards of Skinny
Dipping (Hazards)

The Hazards of a One
Night Stand (Hazards)

The Hazards of Sex on
the Beach (Hazards)

The Hazards of
Mistletoe (Hazards)

On The Rocks
(Mixology)

You’re probably not
going to believe a word I say. If you’re like everyone else I’ve
told, you’re going to read this and tell me to get help. That’s
fine, because the only thing I care about is finding my winged
hero. So whether you believe me or not, if you see him, tell him
I’m searching for him, and I have no plans to give up. Because when
a man can kiss like that—can make you feel alive in every grain of
your being—there’s no comparison. The only clue I have to find him
is his first name. Owen.

“Please, Daisy. It’s
going to be fun.” That one line out of Reyna’s mouth was the
beginning of the end for me.

“I don’t know. I was
hoping to just have a quiet Halloween this year. Driving all the
way to New Orleans seems a bit extreme.” I set aside my sociology
textbook. There was no way I was getting reading done until Reyna
said her piece.

“There’s nothing like
New Orleans on Halloween. This is going to be epic.” She took a
seat next to me on my bed and grasped both of my hands in hers. She
was getting ready to plead.

“But why the sudden
decision to go? Is it about a guy?” Reyna was usually motivated by
a member of the opposite sex.

“No, not exactly. I
just want to do something fun for a change.”

“Just this guy I knew
back in high school. We’ve started talking again, and he invited me
and any friends to come crash at his place for Halloween.” She
suddenly turned serious. “I’m so sick of the scene here. I need a
break, but I don’t want to go alone. Please, pretty please.”

I sighed, realizing
that saying no would just lead to a pouty roommate for the next few
days. “You promise you’re not just going to ditch me?”

“Of course not! It will
be awesome. He’s got so many hot friends. It’s crazy.”

I tuned Reyna out as
she went on and on about Tulane boys. Admittedly, my dating life at
East Madison wasn’t great, but I knew a random hook up with a guy I
didn’t know wasn’t going to help matters either. “There’s just one
problem. Isn’t New Orleans a full day’s drive from here?” I wasn’t
an expert on driving distances, but Atlanta and New Orleans aren’t
exactly next door.

“It’s doable. About
seven hours. I’ll do all the driving. All you need to do is keep me
company.”

“You really want to do
this?” Despite her obsession with guys, Reyna was actually a really
good roommate. We’d both joined the same sorority, Delta Mu, the
year before and hit it off immediately.

“Yes.” She turned her
doe eyes on me.

I wasn’t exactly
jumping at the idea of the trip, but Reyna’s one of those people
who always manages to find a good time, and sometimes I just liked
to go along for the ride. “Okay.”

“Great.” I leaned back
against my pillows. “I guess I really need to find a costume
then.”

“Just sex up that black
cat costume you wore last night.” Reyna rifled through her
closet.

“Sex it up?” I’d donned
cat ears for our Halloween kid’s philanthropy event, but I had no
plans to wear them again, and sex them up? Did she forget who she
was talking to?

“Yeah. Tight shirt and
short black skirt. It’s easy enough.” She tossed one of her skirts
at me. “Try this.”

“You’re way shorter
than me. This skirt is going to be up to my ass.”

Reyna grinned. “That’s
called sexing it up. Wait until you see my firefighter costume.
It’s hot.”

“Hotter than me wearing
this?” I held up the black fabric.

“It’s a short skirt,
but also just a jacket over a red bra. It’s a little over the top,
but Chad said that’s what Halloween is like there. I’m embracing my
inner skank.”

“You don’t have to wear
that skirt. Wear one of your own, but please try to look decently
sexy. We don’t want to stand out like sore thumbs.”

“Then ask someone else
to go.”

“In other words, I’m
the only one you can dupe into going.”

“Come on. Who else
would be willing to miss the Iota party? I know you don’t care
about that.”

I didn’t care because
none of those guys gave me the time of day. The fact that every
woman in my family had been Delta Mu was probably the only reason
I’d gotten a bid from my sorority in the first place. I didn’t
regret my decision to join, but living with a bunch of tens when
you’re a seven, on a good day with the right makeup and hair
products, can get old. “Fine, I’ll come up with a sexy enough
costume.”

“Perfect. We’ll need to
get on the road early Friday.”

“But I have three
classes.”

“And perfect
attendance. I’m sure you can miss one of each. This is going to be
epic!” She hugged me around the neck.

I decided not to point
out that she’d called the trip epic twice. “I’m sure it will
be.”

“I’m going to text Chad
and let him know.”

“Great.” I picked up my
textbook and tried to get back into my reading. Not that social
phenomena particularly interested me.

“He says awesome. We’re
going out on Bourbon Street for Halloween and everything.”

“Cool.” I plugged a set
of headphones into my phone and turned on some music. Reyna would
never stop talking if I didn’t, and this method usually worked
better than telling her to shut up.

I made it through all
of three paragraphs before she pulled one of my ear buds out.
“You’re the best. Just wanted to tell you that.”

“I need caffeine. Want
to go over to the Java Circle to read? I heard they’ve got that
white hot chocolate stuff you love.”

“Sure.” Reyna knew the
way to my heart. Hot chocolate. I had a mild addiction.

“Great. We can
strategize costumes on the way over.”

I laughed. “I’ll go
with the cat idea if I don’t find anything else.”

“There’s no reason not
to. It’s classic.”

She pushed my arm
playfully. “Please try to get hyped up, for my sake.”

“Of course. If nothing
else I’ll get hyped about the food. I’ve heard it’s amazing.”

“See.” She linked her
arm in mine as we headed toward the stairs. “There’s always a
bright side.”

Seven hours is a long
drive. Add on an extra two hours thanks to traffic, and it’s pretty
much endless. I wasn’t the one driving, but sitting in the
passenger seat with Reyna driving wasn’t much better. She didn’t
‘believe’ in GPS. Instead she tossed a tattered old map on my lap.
“I know where we’re going, but we have that just in case.”

Although at first I
missed the familiar computer generated voice reading directions, it
didn’t take long to get used to using a paper map again. It brought
me back to my childhood. My dad’s one of the types that is all
about life skills. Evidently reading maps was still a life skill in
his book, because he made my brother and I master the art before
the end of elementary school. I planned to call him later and thank
him.

A few hours into the
drive I decided to ask some more questions about Chad. Reyna had
been surprisingly reticent on the subject. For a girl who usually
gave details, way too many details, her silence made me a little
suspicious. “Are you ready to tell me about him?”

“Knew how?” I turned
down the radio.

“He’s the one who got
away,” she said in barely a whisper.

“What?” I said in
anything but a whisper. Hooking up with an ex-boyfriend was always
a bad idea. I knew from experience. “We’re going to New Orleans so
you can hook up with an ex?”

“Calm down.” She looked
right at the road. It wasn’t for safety reasons. She was avoiding
my gaze.

“So how do I fit in?
What am I going to do while you guys
reconnect
?” I resisted
the urge to use air quotes.

“I don’t know what’s
going to happen. I just couldn’t do it alone. I needed my best
friend with me.”

Best friend? Did she
really see me that way? “Since we’re hours from Atlanta I’m coming,
but I wish you’d been honest with me from the beginning.”

I was such a pushover.
I could practically hear my brother lecturing me. He said I
couldn’t spend my whole life as a doormat. He was right, but that
didn’t mean I knew how to change it.

“His roommate’s single
and excited to meet you.”

I groaned. “I am not
hooking up with the roommate.”

“I never said you had
to. I was just letting you know. He’s really cute.”

“Wonderful.” Reyna
might as well have been getting a degree in matchmaker for all the
effort she made trying to set other people up on dates. It wasn’t
something she was particularly good at. To be honest, I couldn’t
think of a single success story.

She changed lanes and
gunned it to pass a truck. I held onto the ‘oh my god bar’ for dear
life. She reduced speed once she was settled back in the right
lane. “I really owe you for this. I promise I’ll make it up to
you.”

“Didn’t anyone ever
tell you not to make promises you can’t keep?”

She laughed. “Trust me
on this one. I don’t even know if anything is going to happen. He
invited me as a friend, remember?”

“You really believe
that?” I didn’t. A guy wouldn’t invite an ex to stay with him
unless he planned on rekindling the old flame—or getting her in
bed—or most likely, both.

“I do. We flirt and
stuff, but it hasn’t passed that.”

“If you say so.” I
wasn’t in the mood to argue, but I steeled myself for a long few
days. Hopefully I’d be able to navigate New Orleans on my own.

I checked the address
twice after Reyna parked along the curb. When she said we’d be
staying in an off-campus apartment I assumed it was going to be a
complex or something. Instead we were parked in front of an old
house that looked like it should have been condemned. Ok, that
might be a slight exaggeration, but it didn’t exactly have curb
appeal.

“You coming?” Reyna
asked leaning in through her open door. Miraculously she didn’t
look like she’d been sitting in a car for seven hours. Now me on
the other hand, that was an altogether different story. I’d barely
slept the night before, and even if I wore makeup it wouldn’t have
covered up the bags under my eyes.

“Yeah, I’m coming.” I
reluctantly unbuckled and got out. I wasn’t looking forward to what
I knew would be an awkward introduction.

Reyna pulled out my
duffel in what she probably viewed as a peace offering. I put it
over my shoulder and followed her over to the questionable looking
set of stairs. I tentatively touched the bottom step before taking
a deep breath and following her up to the porch.