Read See How She Dies Online

See How She Dies 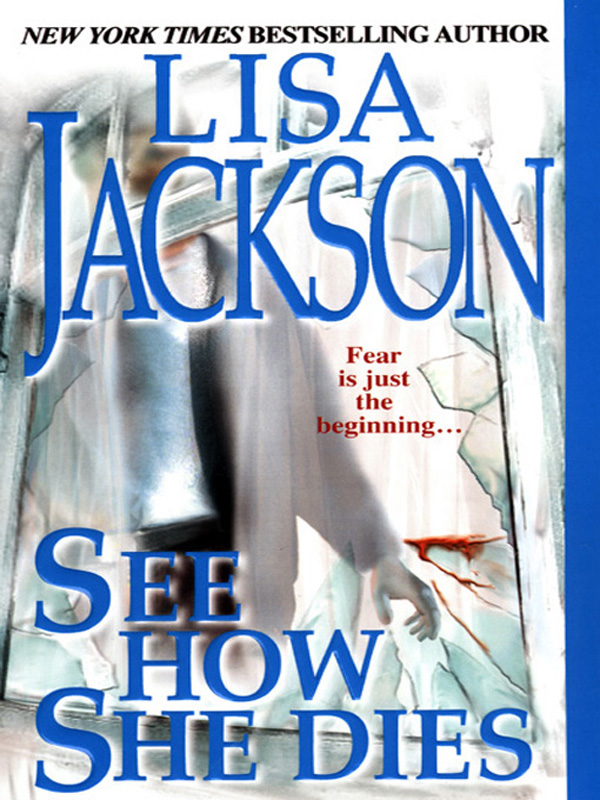 Adria attempted to shake off the feeling that something was out of place, but as she reached for the door, she felt more than a second's hesitation. Dread made her hand pause, her key extended. Silly as it was, she had the eerie sensation that someone or something evil had been here recently, and a frisson of fear swept down her spine.

“Something wrong?” Zachary asked, so close she could feel his breath against the back of her neck.

“No, I think I can manage. Relax with the bodyguard tactics, okay?” Managing a thin smile, she pushed her key into the lock and shouldered open the door.

Adria took one step inside and her gaze fastened on the full-length mirror near the closet. Her blood turned to ice. “Oh, God,” she whispered, biting back a scream.

“What?” Zach demanded, striding past her, only to stop short as he viewed the scene.

The mirror was cracked and smeared with blood, as if someone had put a fist through the glass. Upon the splintered pieces, a large, mutilated photograph of Adria had been taped. Her head was severed from her body, the bloody crack in the mirror slicing across her neck. Her eyes had been cut out and rimmed in blood, the mirror streaked red, so that when she looked at the image, she saw the reflection of her eyes cast in blood.

Adria began to shake. “What kind of monster would do this?”

Zach wrapped an arm around Adria's shoulders. “Someone who wants you out of the pictureâ¦”

SEE HOW SHE DIES

IF SHE ONLY KNEW

For the record I'd like to acknowledge and thank the
following people for their help and encouragement:
Nancy Bush, Anita Diamant, Sally Peters,
John Scognamiglio and Larry Sparks.

Needles of hot water pounded upon her bare back. Steam filled the large, tiled stall, fogging the glass doors. Kat Danvers stood beneath the spray, hoping the shower would clear her mind, help her shake the feelings of lethargy and dizziness brought on by too many drinks that had washed down a handfulâ¦was it two?â¦of her favorite pills.

No wonder her mind was sludge, her vision blurry, her every movement seeming exaggerated. A bad taste crawled up her throat and she had the feeling she was slogging her way through quicksand. She let her breath out slowly. Wondered if she'd throw up.

Come on, snap out of it, Kat. Pull yourself together!
Her conscience never seemed to miss an opportunity to nag.

She closed her eyes and leaned her arms against the slick tiles. The water was so hot it nearly scalded her. She needed to sober up, and fast. As quickly as she could, she twisted the faucet hard. Immediately the hot water turned to ice and she gasped, sucking air in through her teeth. Her mind cleared for an instant.

She felt it then, an odd sensation. As if something stirred and she heard a faint, indistinguishable noise over the rush of cascading water. Her eyes flew open and she tried to peer through the misty glass. Did she see a shadow pass through the open doorway to the bedroom? Or was it her imagination? A trick of her tired, overdrugged mind and blurred vision? She needed her contacts or her thick glasses.

It was probably nothing.

And yet her skin crawled beneath the frigid spray; tiny goose bumps of fear pebbled her smooth, wet skin.

“It's all in your mind,” she muttered, but turned off the water anyway and stood, shivering and dripping, while her ears strained to hear anything out of the ordinary.

There was nothing. Just the steady drip of water from the showerhead, the soft rumble of the heater, the strains of Christmas music drifting from hidden speakersâand farther away and muted, the quiet hum of traffic in the city. But nothing else. No sound of a shoe scuffing over the thick carpet of the presidential suite, no rattle of the room-service cart, no click of keys in the lockâ¦nothing out of place.

Sluggishly, she clicked open the glass door and reached for her robe.

A tiny voice. A girl's voice.

No! It couldn't be. She wouldn't believe it. No toddler's voice had spoken. Her mind was playing tricks on her againâ¦that was it. The drugs and booze had combined toâ

Frantically she stepped out of the shower and nearly fell on the slick marble as the notes of “Silent Night” filled the room. “Baby?” she whispered.

Barefoot, leaving a trail of water, she stumbled toward the door, somehow managing to force her unwieldy arms through the robe's sleeves.
Get a grip! You're hallucinating again and you know it.
There is no baby. Your daughter is
not
in any of the other rooms.
Grab hold of yourself!
Grasping onto the doorjamb, she peered into the bedroom. The king-sized bed was rumpled, a small impression visible on the comforter where she'd fallen asleep earlier. Her near-empty glass was sweating upon a bedside table near two empty bottles of pills.

The closet door was ajar, giving her a view of her clothes neatly lined up on hotel hangers.

The sound was distinct. Clear.

Coming through the open French doors.

“Oh, sweetheart,” Kat cried, her voice cracking as she turned quicklyâtoo quicklyâtoward the living area and fell against the night table, scraping her arm and cheek. The antique lamp tumbled to the carpet, its bulb shattering.

But she couldn't stop that tiny sliver of hope from burrowing into her heart as she climbed to her feet again. The room spun. Using one hand, she braced herself on the wall and chairs as she staggered into the living area. She blinked hard. Tried vainly to focus. Nothing seemed disturbed. Nothing out of place. Flowers and a fruit basket sat upon a glass-topped table. Two Queen Anne chairs and a small love seat surrounded the antique fireplace where flames burned quietly.

No boogeyman lurked in the shadows.

Her daughter wasn't waiting for her.

Of course not. Her imagination and paranoia were working overtime again. She was falling apart. Unraveling. She caught a glimpse of herself in the mirror and cringed at the foggy image. Disheveled, wet hair, a gaunt body draped in a robe too large, no makeup on a face once beautiful and now ravaged by pain and guilt. Tears, unbidden, filled her eyes. She was losing her mind. Bit by bit.

Wiping her hand beneath her nose, she chided herself for being a fool. She, a woman who had always known what she'd wanted and gone after it. She, who had used her beauty and brains to snag the wealthiest man in Portland. She, who so recently had everything any woman could ever want. And now she was reduced to shards of harsh memories, sleepless nights, and long hours trying to dull the pain with prescriptions and alcohol.

Cinching the robe around her thin body, she felt a draftâ¦the tiniest breath of wind against the back of her neck. She looked over her shoulder. Saw the curtains near the balcony doors move. But she'd locked the French doors just before her showerâ¦right? She'd taken her drink onto the small verandah and stood overlooking the city, contemplating suicide, and finally discarding taking her life as too dramatic, too frightening, too self-defeating.

So why was the door unlatched?

Hadn't she come back inside and turned the dead bolt behind her? Yesâ¦that was right. After securing the lock, she'd taken one last swallow of her drink, then left the glass on the bedside table before stripping and heading unsteadily for the shower. That was right, wasn't it?

Or was she mixing things up?

Why couldn't she remember?

Why was everything so fuzzy?

Maybe she had heard someone prowling through these rooms while she'd stood under the shower's spray.

Her throat turned to dust.

Again she sensed a presence.

Something eerily out of place.

She started for the telephone.

Kat's heart nearly stopped. “London? Baby?” The sound was coming from the verandah, through the crack in the door. This was insane. She should reach for the phone. Phone hotel security. Call the police.

And have them all look at you like you're crazy?

Have them exchange glances as they noticed the vials on the nightstand?

Have them suggest you “talk” to someone?

Is that what you want to go through again?

Heart thudding, she inched her way to the exterior doors where the curtains billowed slightly and the chill of December seeped inside. Through the sheers she saw a dark shadow. Small. Shivering.

A blast of winter hit her hard.

The interior light snapped off.

The figure turned a face toward her, and even through the fog in her mind and the semidarkness of the city, she recognized the faceânot of her missing daughter, but of a treacherous, wicked liar.

“You,” she spat, trying to turn away. Blindly, she flailed, trying to escape.

Strong fingers grabbed her shoulders and a fierce, intent weight shoved her closer to the short brick wall surrounding the verandah. Kat screamed. Her knees hit the century-old brickwork; she tried to grab something, anything, to no avail. The force of her body slammed against her backsideâthe sheer determination of her attacker propelled her forward, closer to the edge and the crumblingâ¦“No! Oh, God, no!” Kat cried, seeing a hand in her peripheral vision. Gloved fingers clutched a bit of brick. Kat cringed.

Pain exploded behind her eyes. Blackness pulled her under. She started to sag, but was propped up, pushed forward, the railing hitting her in her middle and disintegrating with her weight.

And then suddenly she was falling, sailing through the cold night airâ¦