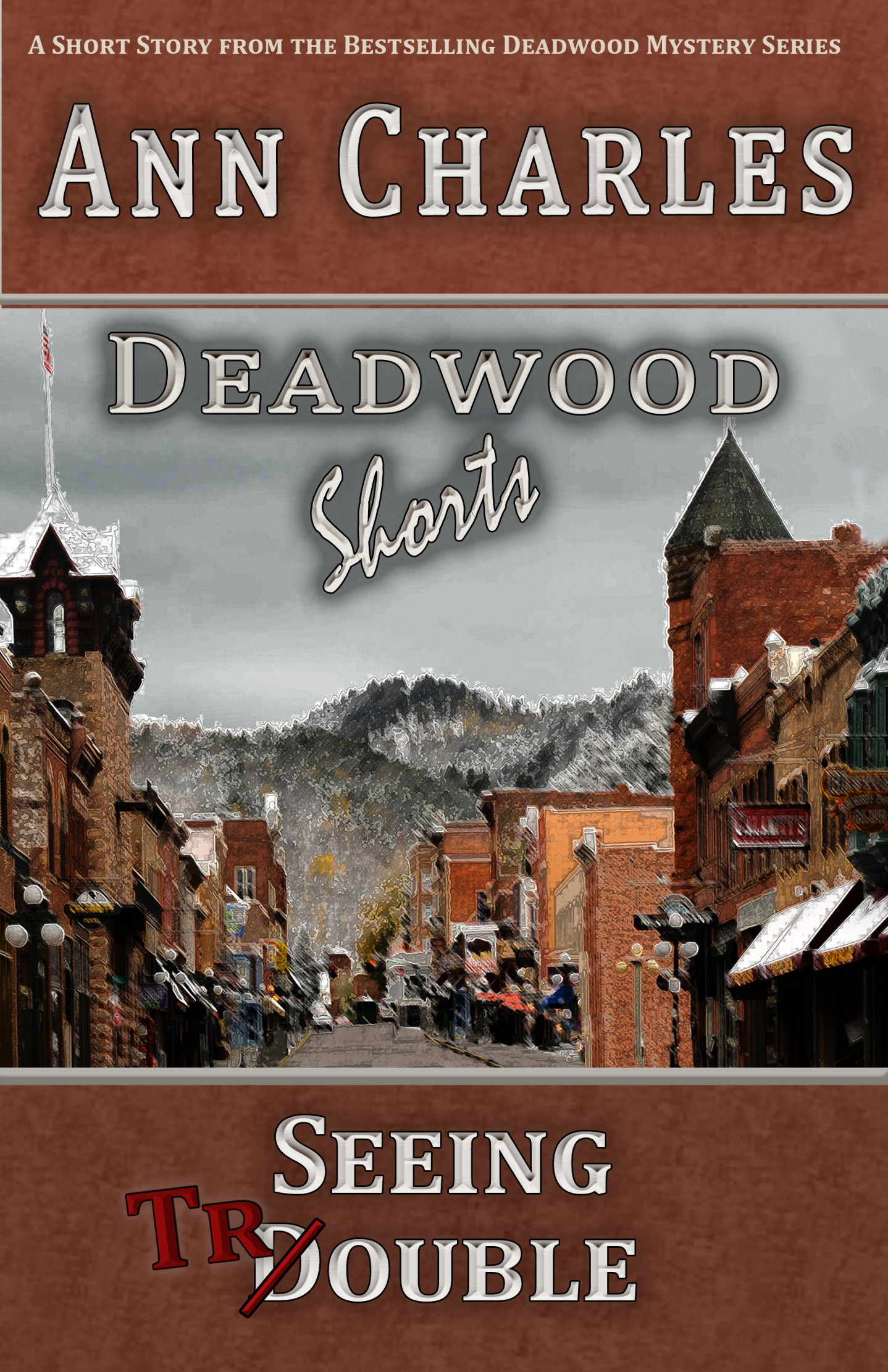 One of the things I’ve wanted to do since I wrote
Nearly Departed in Deadwood
, the first book in my Deadwood Mystery Series, was to write several short stories that give the backstory of the characters and/or the setting. I chose not to include these bits of backstory in the actual novels because I didn’t want to slow the pace. Also, due to the fact that we’re always in Violet’s head, some of the short stories I want to write and share would be difficult to play out on the pages of the novels.

This series of short ebooks will be released in between the regular length Deadwood novels and will offer what I hope to be fun insights to gobble up, kind of like those mini-sized candy bars and MoonPies. Rather than blather on about my random ideas, crazy antics, and diabolical plans, I present to you the first Deadwood Shorts ebook:
Seeing Trouble
.

Seeing Trouble
offers answers to some of the questions I’ve received from fans about how Violet Parker ended up as a single mother of twins. It was originally titled
Dear Diary in Deadwood
and was part of a Valentine’s Day anthology with several other authors’ works. In addition to this short story, I’ve included the original character interview I did with Violet prior to writing the first book that introduced us to her wild world. I threw in a couple of Deadwood illustrations by C.S. Kunkle that were created for my original website. I have also included several images that show the progression of the cover design for
Nearly Departed in Deadwood
, from the first working cover I created after finishing the first draft, through several contenders drawn by C.S. Kunkle, to the final product that you see today. Finally, I added a short story called
Candy Lover
that I pulled from my story vault. It has nothing to do with Violet and Deadwood, but it’s a story that I felt might put a smile on your face.

I hope you enjoy this first ebook in the Deadwood Shorts series.

As Old Man Harvey would say, “Don’t squat with your spurs on.”

The Beginning of the Deadwood Mystery Series 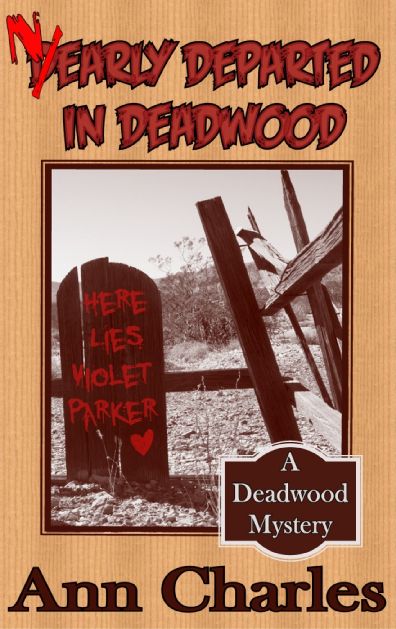 “Hey, Mom,” said Addy, my nine-year-old daughter, as she burst through my bedroom doorway. “Elvis found this old book in the basement.”

She held out a book I hadn’t seen in over a decade—my old diary. The upper corner of the cover had been pecked, leaving it tattered.

Elvis was my daughter’s pet chicken. Long story short, she planned to save the animal kingdom one pet at a time. Elvis was just another in Addy’s long line of birds, mammals, rodents, fish, and amphibious creatures. I’d drawn a line at the garter snake. Indiana Jones wasn’t the only one with a loathing for things that go slither in the night … or day.

“It has a cool little lock on it. It must be a diary,” Addy said, holding up a paperclip. “Can I try to pop it open?”

I inspected the lock for scratches, wondering if she already had and was just covering her ass by asking. “You know how diaries work, Addy. They are for the owners’ eyes only.”

“But we don’t know whose diary this is. It could be the long-lost diary of Calamity Jane.”

Being that we lived in Deadwood, which was famous for its history of gold rushes and gunfights, my daughter tended to think that anything older than she belonged to some famous historical figure. Take the old rusted spur her twin brother Layne, my very own wanna-be archaeologist, dug up in the yard last week. She was certain it had belonged to Wild Bill Hickok.

“We do know whose diary this is, Addy. It’s mine.”

“Are you sure? It looks really old.”

Shut it, child.
“Isn’t it time for you to take Elvis for a walk?”

“What did you write about in it?” she asked, ignoring my attempt at distraction.

Your father.
“Just some thoughts on life and growing up.”

“You should let me read it. I might learn something of value.”

It was ironic how whenever she wanted to get her way, she reflected my words of wisdom right back at me. “I’m not falling for that, Adelynn Renee. This book is for my eyes only.”

“Because I don’t want you to.”

In the pages of this little book, I’d written the truth about her father, a man she had yet to meet. I didn’t feel like taking a trip down memory lane to visit him tonight with her in tow. It would only raise questions that were better left for after she graduated high school—or maybe college. That asshole of a sperm donor didn’t deserve her love and affection before she was able to fully understand what had happened a decade ago.

Addy sighed and threw herself on my bed. “I was hoping we could read it together and bond.”

Bond? I narrowed my eyes. “You need to stop watching the Hallmark Channel.” I picked up a pair of her pajamas that for some reason were on the floor of
my
bedroom and handed them to her. “Go brush your teeth and climb into bed.”

“Go. Now.” I nudged her toward the door. “I’ll be in later to kiss you goodnight.”

She trudged out the door, her stocking feet sweeping a cluster of dust bunnies with her.

As soon as I heard the bathroom door close, I picked up the diary and popped it open with Addy’s paper clip.

Running my finger over my name, I chewed on my lower lip, remembering. I’d been so young, so clueless. I fanned the pages full of loopy cursive writing. Even my handwriting had been different then—flowing and pretty, not the rushed scrawls I used now.

I stopped on a page with a short, sloppy entry:

July 13th
:
Crappity crap! I just realized I totally missed my period. It must be the new birth control pills messing with my system. Seems like the nurse said something about this happening. Maybe I should call the doctor.

Ha! If only it had just been the pills making my period a no-show. I’d forgotten all about calling the doctor thanks to the full load of college classes I was taking, my full-time job, and, of course, my preoccupation with Addy’s father. His blonde hair, golden brown eyes, and hard body had melted my underwear along with my resistance every time he came around to charm me into bed. I’d had a thing for sexy brainiacs back then, especially a science major who talked like Captain James Tiberius Kirk during sex. Don’t … stop …Violet.

I flipped a couple of pages, grimacing at the big, bold strokes I’d used on one of them.

Ah, yes. My little sister, a.k.a. Psycho Susan. I should have known that she was going to be a permanent burr in my ass back when she was four and she cut the hair off all of my Barbie dolls because I’d told her she couldn’t play with them while I was at school. Since birth, she’d lived by the motto: What was hers was hers, and what was mine was hers to destroy.

The night I came home early from work and walked in on her naked and gasping in my bed underneath Addy’s father was the night I had shut them both out of my life. I still felt a slight kick in my solar plexus whenever the image of them together popped into my head. Her game had sunk to a new level. It was no longer about whom Daddy loved more.

Shaking my head, I flipped forward a few more pages. The writing was short and sweet and slightly smudged.

I shook my head, remembering the choking fear squeezing my esophagus when I’d stared at the ultrasound image on the monitor. A baby. Oh, my God, a baby.

My sister had still been hot and heavy with Addy’s father at the time. We’d become our own soap opera: The Young and the Pregnant. There had been so much drama in the air that summer, especially the night Addy’s dad had come to my door and declared his love for me. When I asked why he was having sex with my sister, he claimed it was only because he couldn’t have me.

I tried to break his nose with the door when I slammed it, but he’d been too quick for me.

For the next few weeks, I’d chewed my knuckles about whether to tell him or not about the baby. Maybe he really did love me. Maybe, somehow, we could carve a happy family life out of this mess. Maybe I was delusional from pregnancy hormones.

In the end, Natalie, my best friend, had talked me into giving him a chance to be a father.

I turned the pages until I found the entry about me coming clean with him. Two pages later, I had written down his response.

September 12th
: Psycho Susan called me this morning crying hysterically. When she finally calmed down enough to make sense, two words rang clear. “He’s gone.” So much for having a loving, responsible father for my child. If I ever see the dickhead again, I’m going to tear his nuts off and turn him into a eunuch.

After our little chat about me bearing his child, the jerk never did contact me to tell me I was going to have to fly solo. Apparently, being a genius didn’t guarantee he was smart.

A bunch of self-pity filled the next chunk of pages. Then I came across an entry I remembered all too well.

October 5th
: TWINS! I’m having twins. Oh! My! God! I’m so screwed. The nurse gave me some information on adoption today after I mentioned that the father had run for the hills, abandoning me to raise two babies on my own. The flyer says that they screen the potential parents, including an FBI background check. I don’t know what to do.