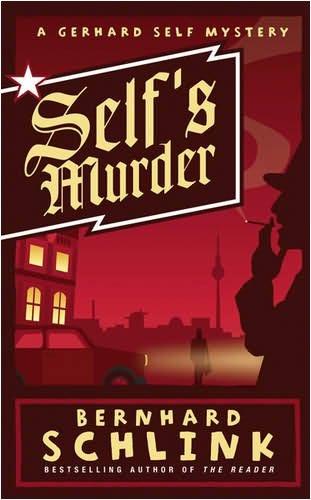 The successful film adaptation of Schlink’s The Reader should give a boost to his third mystery to feature aging German PI Gerhard Self (after 2007’s
Self’s Deception
).

On his way home to Mannheim during a snow storm, Schlink helps a stranded driver, Bertram Welker, who on learning Self’s profession offers him a job.

A partner in the region’s oldest private bank, Welker is writing its history and asks Self to identify a silent partner in the bank. What appears to be a straight forward assignment becomes a double murder inquiry once Self comes to doubt Welker’s account of how his wife perished in a hiking accident the year before and the bank’s unofficial archivist dies in a suspicious car crash after handing Self a briefcase full of money.

Crisp prose and some well-handled plot complications, which include the emergence of a man claiming to be Self’s son, will keep readers turning the pages. 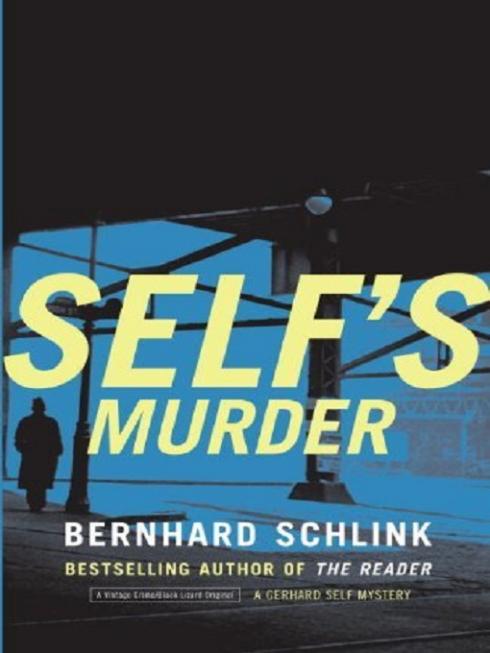 I
n the end I did head back there.

I didn’t have Nurse Beatrix sign me out. She wouldn’t even let me tackle the short, easy paths leading from the Speyerer Hof Clinic to the big Ehrenfriedhof Cemetery and the Bierhelder Hof, let alone the long steep path that leads up to the Kohlhof. In vain I told her how years ago my wife and I used to go skiing on the Kohlhof: in the morning we’d head up the slope, the bus filled with people, skis, ski poles, and toboggans. Until sundown hundreds would swarm over the rutted slope, more brown than white, with its dilapidated ski jump. At lunchtime pea soup was served at the Kohlhof Restaurant. Klara had better skis than I, was a better skier, and laughed whenever I fell. I would tug at the leather straps of the bindings and grit my teeth; Amundsen had conquered the South Pole with skis that were even more antiquated. In the evening we were tired and happy.

“Let me head over to the Kohlhof, Nurse Beatrix. I’ll take it easy. I want to see it again and remember old times.”

“You’re doing a good enough job remembering right here, Herr Self. Would you be telling me about it otherwise?”

“Look at that! What a beautiful view!”

She’s right. I’m sharing a room with a tax inspector who’s suffering from a stomach ailment, and the view from the window is indeed panoramic and beautiful: over the trees and valleys to the Haardt Mountains. I look through the window and think how this region, where I landed by accident during the war, had grown on me and become my home. But was I to think about that all day?

So I waited until the tax inspector fell asleep after lunch, then swiftly and silently took my suit out of the closet, slipped into it, and managed to make my way to the gate without bumping into a single nurse or doctor I knew. The guard didn’t care whether I was an escaping patient or a departing visitor, so I had him call me a cab.

We drove down into the valley, first between meadows and fruit trees, then through tall woods, the sun casting bright spots through the treetops onto the road and the underbrush. We drove past a wooden shack. In the old days the town had been quite a distance away, and hikers would make a last rest stop at this shack before returning home. Nowadays the first houses lie off to the right after just two bends in the road, and a little farther, on the left, is the Bergfriedhof Cemetery. At the foot of the mountain we waited for the light to change, near an old kiosk that I always liked: a Greek temple, its forecourt built on a small terrace and its canopy supported by two Doric columns.

The road to Schwetzingen was open and straight, and we made quick progress. The driver told me all about his bees. From this I concluded that he must be a smoker, and asked him for a cigarette. I didn’t like the taste. Then we arrived and the driver dropped me off with a promise to pick me up again in an hour to take me back.

I stood on the Schlossplatz. The building had been renovated. It was still covered in scaffolding, but the windows had been replaced and the sandstone frames of the door and window casings cleaned up. The only thing missing was a final coat of paint to make it just as spruced-up as the other buildings around the square, all three-storied and neat, with flowerboxes in the windows. There was no indication what the building would be—a restaurant, a café, a law firm, a doctor’s office, a software company—and, peeking through a window, I saw only floor tarps and painters’ ladders, paint cans, and rollers.

The Schlossplatz was empty except for the chestnut trees and the statue of the anonymous market wife selling asparagus. I remembered the streetcar whose rails used to end in a loop on the square. I looked over at the castle.

What did I expect? That the building’s gate would open and they would all come out, stand in a row, bow, and laugh as they scattered in all directions?

A cloud covered the sun and a cold wind blew over the square. I felt a chill. Autumn hung in the air.

I
t all began one Sunday in February. I was heading back home to Mannheim from Beerfelden with my girlfriend, Brigitte, and her son, Manuel. Brigitte had a friend who had moved to Beerfelden from Viernheim and had invited us for a coffee-and-cake housewarming. Their children got on well together and the women talked and talked. By the time we got into the car it was already dark.

We had barely set out when it began to snow—large, heavy, wet flakes. The narrow road uphill through the woods was desolate. There was no car in front or behind, nor any coming in our direction. The snowflakes got thicker. The car swerved in the curves, the wheels skidded where the road was steep, and visibility was just enough for me to keep the car on the road. Manu, who had been chattering away, fell silent, and Brigitte kept her hands folded in her lap. Only her dog, Nonni, was asleep as if nothing was going on. The heater hadn’t really kicked in, but my forehead was covered in pearls of sweat.

“Shouldn’t we stop and wait for the—”

“It could snow for hours, Brigitte. And once we get snowed in, we’ll be stuck.”

I saw the car in the ditch only because the driver had left his headlights on, and they shone across the road like a barrier. I stopped.

“Do you want me to come with you?” Brigitte asked.

I got out, pulled up the collar of my jacket, and trudged through the snow. A Mercedes had strayed onto a side road and in attempting to get back onto the main road had gotten stuck in a ditch. I heard music—piano and orchestra—and through the fogged-over windows saw two men in the lighted interior, one in the driver’s seat, the other diagonally behind him in the backseat. Like a steamship run aground, I thought, or an airplane after an emergency landing: the music plays on as if nothing has happened, but the journey has come to an end. I tapped on the driver’s window and he lowered it a chink.

Before the driver could answer the other man leaned over and opened the back door. “Thank God! Get in,” he said, leaning back and motioning with his hand. Heat streamed from the interior, along with the aroma of leather and smoke. The music was so loud that the man had to raise his voice. He turned to the driver: “Turn it down, please!”

I got in. The driver took his time. He slowly reached over to the radio, fumbled for the knob, and turned it, and the music grew softer. His boss waited with a frown until it fell silent.

“We can’t get out of here, and the phone isn’t working. I have a feeling this is the back of beyond.” He laughed bitterly, as if getting stuck were not only a mishap but some personal slight.

“Could you help push the car? If we can manage to get out of this ditch we’ll be all right. There’s nothing wrong with the car.”

I looked at the driver, expecting him to say something. After all, he was responsible for this mess. But he didn’t say anything. In the rearview mirror I could see his eyes fixed on me.

The boss saw my questioning look. “Why don’t I get in the driver’s seat, and you and Gregor push? What we need …”

“No.” The driver turned around. A mature face and a low, hoarse voice. “I’ll stay here, and you do the pushing.” I heard an accent, but I couldn’t quite place it.

The boss was the younger of the two, but looking at his delicate hands and slender build, I couldn’t make rhyme or reason of the driver’s suggestion. However, the boss did not contradict him. We got out. The driver stepped on the gas and we pushed against the car, the spinning wheels whirring and flinging out snow, pine needles, leaves, and mud. We went on pushing, it went on snowing, and our hair got wet, our hands and ears numb. Brigitte and Manu came over. I had them sit on the car’s trunk, and when I got on it, too, the wheels made contact and the car lurched out of the ditch with a jolt.

“Get home safely!” I called out after them, and we headed back to our car.

“Wait a minute!” The boss came running after us. “Who should I thank for rescuing us?”

I found a card in my jacket pocket and handed it to him. “‘Gerhard Self.‘”

He blew the flakes off the card and read aloud: “‘Private investigator.‘ You are … You are a detective? Then I have a job for you. Can you drop by my office?” He rummaged around in his pockets for a card but didn’t find one. “My name is Welker, and it’s the bank at the Schlossplatz in Schwetzingen. Will you remember that?”

I
didn’t go to Schwetzingen the following day, nor the day after. In fact, I had no intention of going. Our encounter that stormy night on the Hirschhorner Höhe, and his invitation, reminded me of the promises one makes with holiday acquaintances. They never work out.

But a job’s a job, and a case is a case. I had spent last fall investigating the sick-leave claims of salesladies at the Tengelmann department store chain, and had managed to catch one or two who were feigning illness. That was about as rewarding as being a train conductor on the lookout for fare dodgers. In the winter no cases came my way. It’s just the way of the world: one doesn’t hire a private detective who is over seventy as a bodyguard, or send him around the world to chase down stolen jewels. Even a department store chain that wants to spy on its sales staff will be more impressed by a younger fellow with a cell phone and a BMW who’s a former cop turned private investigator than by an old guy driving an old Opel.