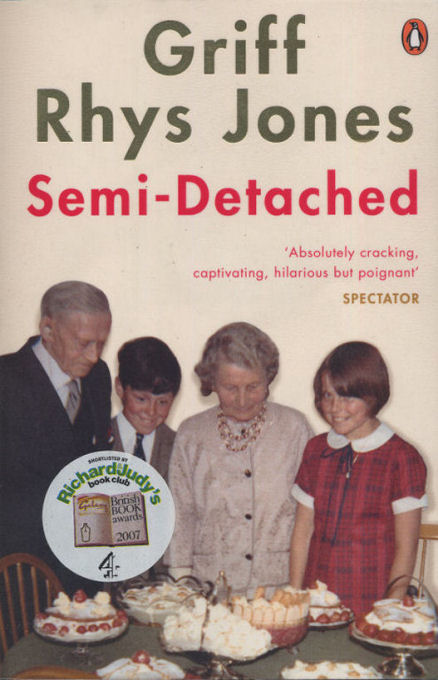 I would like to thank
everybody who helped me try and remember some of this stuff, especially Graham,
Charlotte and Geoff, also Louise, for being so patient, Cat for being so good,
David for being so attentive and Jo, without whom nothing at all would be
possible, ever.

So you think you will be happy, taking doggie for a
walk

With your semi-detached suburban Mr…

The first thing I can
properly remember is having breathing competitions with my father. I can
recreate the sensation of lying up close to him, in my parents’ bed, waiting
for him to come to properly We would have been under that pink eiderdown — the
shiny satin thing, with the arabesques. It ended up in the spare room, the
stitches going, fading in sunlight, but at that time, slippery and cool to the
touch. It was thrown over the lot of us, crammed into the one bed on a Sunday
morning. My older brother and little sister, across the landscape of imaginary
hillocks, beyond the Kilimanjaro of my father’s stomach, were there too, huddled
up against the cold. It was cold in houses in 1960s mornings. That’s why we
were all in their bed. I must have been about four.

There
had been previous lives in Cardiff and in Banchory in Scotland, where my sister
was born. I had had a bobble hat with flaps and a pretty impressive sledge,
because I have seen the photographs, but a starting point which is mine and not
part of a diary or hypnotic recall is that Sunday imprisonment in my father’s
hum. I can feel the walrus enormity of his presence, instantly re-imagine the
sure, steady rhythm of his inhalations, as he dozed on, drifting in and out of
sleep while I waited for him to get up.

My
father never slept like a baby. He slept like a piece of agricultural pumping
machinery. It was quite impossible to out-breathe him. I got dizzy trying to
fill my lungs in his ponderous way, particularly when the slight fizzing
whistle started up and the honking suck of a snore began somewhere in the back
of his throat. I remember worrying too, because listening to him used to make
me acutely conscious of something that otherwise I did all the time without
ever thinking about it.

To get
back to my beginning, one weekday in March I returned to West Sussex. It was an
unfamiliar route, which was good. There was a sense of exploration, which is
what I wanted. At Hindhead the traffic lights in the middle of the A3 had a
pre-war craziness, which was apposite. Turning left towards Haslemere, I began
to pass the estate cottages, with their doors and windows in the jaundiced
yellow of the Cowdrey Estate, turned off at the top of the downs on to the
mile-long drive towards ‘the Sanny’ and plunged into a thick, wet mist. What
could be more appropriate? I was visiting this place through a Powell and
Pressburger special effect. My dad worked at this sanatorium as a junior
doctor. We lived in ‘the Lodge’, sometimes known as ‘the Engineer’s Lodge’,
just before you got to the hospital itself. I went to a kindergarten school
called Conifers down the hill in Midhurst. When I was seven he got another job,
and we moved away. But the truth is I always remember Midhurst as a paradisical
half-dream. And now that world of woods and paths and the little house amongst
the Douglas firs was coming at me through a watery vapour condensed about dust
particles, a fog of associations and half-glimpsed realities.

To the
south of our house, through the trees, lay the mansion of the eminent
Australian chest doctor who ran the place, Sir Geoffrey Todd (‘the Old Man’).
So if it had been a Sunday, after my father had dragged himself out of bed and
complained loudly about how he hated socializing, we would have gone. down
there for pre-lunch drinks.

Our
hair would have been plastered down to our scalps with water. (Run the comb
forward with a harsh, agonizing scrape and then flick to one side.) Our grey
socks would have been pulled up tight to the bottom of the knees, anchored
there with tiny elastic garters, so that no more than an inch or two of
white-scarred and sometimes black-pitted leg showed below our long, pleated
shorts. The shorts were held in place with a snake-belt, again striped and
elasticated, the ingenious ‘s’ buckle slipping through a twisted metal hole. On
top of this we would have worn a tight, woolly v-neck jumper, grey flannel
shirt and, in all probability, a tie. And this was our day off.

All the
grown-up males dressed in an adult version of the same get-up. Not shorts, but
long grey slacks (gathered high, in pap-scratching mode), tweed jackets and
tiny striped or tartan ties. Somewhere between schoolteachers and scientists,
the doctors were the post-war
Punch
middle classes. They talked
lawnmowers and smoked pipes: sometimes bold modernistic ones, with a
corner-angled bowl. The memsahibs wore hooped, fullish skirts in bold
patterns. And everybody drank gin and tonics, probably in special gin and tonic
glasses. It wasn’t an affluent time, but it was an aspirational time. They
dressed like the Royal Family — like Prince Charles still dresses.

We
children had to stand properly in a little row until Lady Todd had paid us due
attention. Like all the grown-up ladies she was rustly and powdered, but slim
and angular in her Australian way, and with Antipodean shorter hair, bolder
earrings and the twinkle of sophisticated, amused condescension in her eyes.
And then we got a Coca-Cola. It was a measure of how far into the stratosphere
these people were that they dispensed real Coca-Cola from a deep fridge somewhere
in ‘the servants’ quarters’. These were bare and functional, compared with the
glittery, shiny Todd front room with its French windows opening on to an
achingly bright lawn. Real Coca-Cola was something we never saw anywhere else.
Not simply because it was an expensive luxury, but because, like American comic
books and ITV, it was something inherently corrupting, although not apparently
to Australians. At Sir Geoffrey Todd’s house it was served in little metallic
cocktail beakers in a translucent blue, or a glittering pink’ which went cold
with their contents. Oh! The icy perfection of it.

Once,
the Old Man himself took my father and me up to his attic. We had to mount a
ladder which he pulled down from the ceiling and crawled through a hatch under
some dark planking to emerge in the middle of a model railway system of
stupefying complexity. Hundreds of feet of rail snaked past gasometers,
stations and signal boxes, not just in single measures, but sometimes laid six
in flank. And then he flicked a switch and plunged us into darkness, and his
entire marshalling yard landscape lit up. Each train was illuminated,
obviously, but so were hundreds of free-standing lights on tiny gantries. The
Pullman carriage windows revealed little lampshades inside. Sir Geoffrey sat in
the middle of his network, rattling his personal fairy-lit trains hither and
thither though the gloom, and puffed on his pipe.

What
was it about doctors and do-it-yourself enterprise? In Blake Morrison’s book
When
Did You Last &e Your Father?
he writes about his GP dad and his
ever-handy tool kit. My friend Rebecca Hossack’s doctor father built his own
house in the Australian desert, decorated throughout with homemade murals.
Perhaps the other doctors and their families, a little squiffy from their G and
Ts, spent the rest of the afternoon playing tennis together on the sanatorium’s
private courts, but not my daddy He would have got bored, falling asleep in the
middle of tea and snoring embarrassingly. He preferred to sequester himself in
the middle of his own territory, using his family as a sort of human shield,
and then make things.

Elwyn,
my father, was the youngest of four siblings after a five-year gap. ‘Some sort
of mistake, it seems.’ He had been brought up by his older sisters, Megan and
Gwyneth, his mother, ‘Nain’, being rather too grand in a Welsh, pompous way to
bother with him. ‘Spoilt,’ was one verdict. He was certainly indulged, nannied
and babied in a manner that the matriarchal Welsh enjoy He seemed to me to
spend an inordinate amount of time in the bath. He loved sweeties, and sought
out ice creams with which to treat himself. He looked like a baby, too, soft,
pink skin, a large, growing belly, pale, scrupulously scrubbed, chipolata
hands, with the doctor’s fingernails always trimmed to nothing. (There were
nail scissors everywhere in our house.)

He
would sit at Sunday lunch with a napkin tucked up into his shirt front, knowing
that he would splatter it with my mother’s nursery cooking. Casseroles and
chops and frozen peas were favourites. Rissoles, shepherd’s pies, big cream
puddings or trifles followed. He was happiest at his own table, in his own
house, where his indulgent habits and self-centred shyness could be annexed
from the demands of any normal social order. He never went to any party without
grumbling. In later life, despite working at three different hospitals, he came
home every day for lunch. Other people and their English social rituals
frightened him. Once at a wedding, a dreaded occasion, he advanced towards the
greeting party and kissed the bride’s father by mistake. With strangers he
could be curt and offhand, wanting, I think, to escape human confrontation and
its attendant boredom.

He
drank little, gave up smoking when it was discovered that it caused cancer,
never played golf or joined any clubs, and had few close male friends,
particularly in later life. He never seemed to have an affair. (It would have
been unthinkable, actually, impossible to imagine.) He never seemed to join
any committees, or even the adult world. He supported himself on a trolley of
his own dignity. He was like Arthur Lowe. I can never catch a glimpse of prickly,
slightly fat, shy, silvery-haired men, men like Edward Heath, without being
reminded of him. They are a type: sexless, defensive, often intelligent in a
boffinish manner, self-important, and I always rather love them.

We can’t
really get to know our fathers as other people until we are almost grown up ourselves,
and by then they have become that immutable bundle of fixed opinions and
uncurious appetites — the middle-aged man. But in Midhurst, Elwyn would have
been in his mid-thirties: young, ambitious, a bit of a comer in his own way, I
suppose. He would have been part of a close-knit -hospital fraternity, modelled
much on the army — quite a difficult man for me to get at through the fog.

I
parked my car in 2005 opposite where we had lived. Even though the mist still
hung around I could see that a lot had altered. For a start the woods were a
car park. I had arranged to meet the communications and PR manager of the
hospital. She showed me into her office. I trailed mud over her white carpet. I
apologized. She passed me a history of the sanatorium as I sat down. ‘Your
father was the engineer here?’ she began briskly.