Read Serpent on the Rock Online

Serpent on the Rock 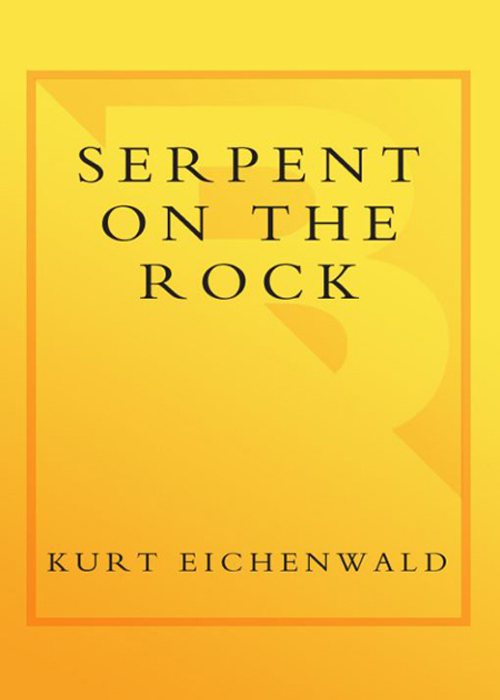 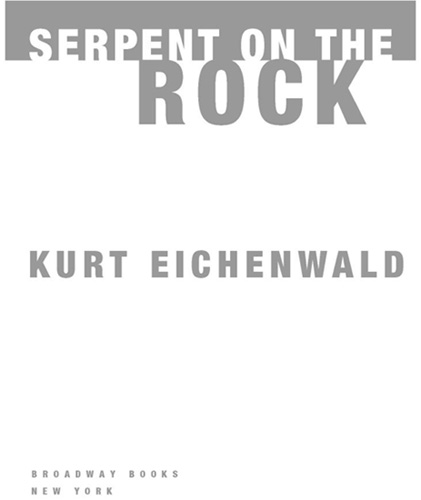 For my wife, Theresa,
whose love, support, and patience
made it possible

O, that deceit should dwell
In such a gorgeous palace!

As a firm, we must continuously measure what we do against a barometer that is calibrated in integrity. Our standing should be second to none.

When we say “Integrity and quality are everything,” we mean it.

It is fair to say that Prudential-Bache Securities' reputation within the securities industry is deplorable.... [The firm] is well known for its abusive sales practices, lack of adherence to compliance procedures, securities law violations and abusive practices towards its own employees.... Prudential-Bache Securities is, quite simply, the author of its own unfortunate reputation.

âJohn P. Cione, former lawyer with the Securities and Exchange Commission, in a sworn statement of July 1990

MORE PRAISE FOR SERPENT ON THE ROCK

A COMPELLING BOOK . . . details a pattern of misconduct, corporate backstabbing, in-fighting and attempts at cover-up at the highest levels of Prudential's management. There also are tales of wild parties, exotic trips for the sales force, and secret deals with shady characters. â
Miami Herald

RIVETING . . . in keeping with the tradition of American financial writing that has been emerging since the best-selling story of the takeover of RJR Nabisco,
Barbarians at
the Gate
. â
The Economist

POWERFUL . . . RICH IN DETAIL AND INSIGHT, it is sure to be the definitive book on the scandal. Indeed, it should be required reading for investors, brokers, and brokerage-firm managers. â
Business Week

ABSORBING AND DEFINITIVE . . . A masterful reconstruction of a substantive financial scandal, one that bears comparison with such landmark exposÃ©s as
Barbarians at
the Gate
,
Den of Thieves
, and
The Predators' Ball
. â
Kirkus Reviews

By the time readers finish this well-reported tale, they'll want to string Pru's manager up by their power ties . . . an appalling indictment of the firm's managers, who did dozens of deals with a convicted embezzler, spent millions of investors' dollars on lavish trips to places like Cancun and Maui, and made cozy arrangements with developers to make themselves rich no matter how their clients fared. â
Newsweek

AN ENTERTAINING AND AN IMPORTANT WORK. â
Publishers Weekly

FOR A BOOK TO RAISE YOUR BLOOD PRESSURE, READ
SERPENT ON
THE ROCK
. . . A STUNNING ACCOUNT. âJane Bryant Quinn

What are the ingredients to a world class scandal? Abuse of power. A cover-up. Kickbacks. Sleazy characters in nice suits. Innocent victims. Some sex, a few drugs. You name it, the long, sordid tale of Prudential Securities' disastrous foray into the limited partnership business has it . . . a fast paced, skillful rendering . . . engrossing, written in a breezy style and full of revealing details. â
Institutional Investor

The story would rival a good fictional counterpart in characters, plot, and storytelling. But
Serpent on the Rock
is true. â
San Diego Union Tribune

A casebook of how not to manage a financial business. â
The Financial Times

Eichenwald goes after Pru-Bache big shots with prosecutorial zeal. He exposes many of them as, variously, liars, bullies, bigots, drunks, cads, and vulgarians. â
USA Today

AN ELECTRIFYING ACCOUNT . . . don't give this one to your broker. It might give him ideas. â
The American Spectator

Written in the breathless tradition of
The Predators' Ball
,
Den of Thieves
and
Barbarians at
the Gate.
â
Barron's

AN INCREDIBLE STORY . . . A GRIPPING ACCOUNT . . . The next time someone offers you an investment opportunity too good to refuse, head straight to your library or bookstore for a copy of Kurt Eichenwald's
Serpent on the Rock
, and don't commit a dime until you've read every word. âThe Press Democrat (Santa Clara, California)

I raved about (
Serpent
) to everyone . . . its narrative unfolds at a breathless pace, and the book is chock-full of richly demonic and quietly heroic characters, lending it a moral vision. âInsight

As long as there is greed, as long as crimes go unpunished, as long as Wall
Street can make millions even when clients lose money, the scandal at Prudential will be just another chapter in an ongoing saga of financial fraud . . . if history is any guide, that is a certainty. The only questions are: Who will do
it next time? And when?

When I wrote those words in 1996 for the paperback edition of
Serpent on
the Rock
, I knew next to nothing about two fast-growing corporate darlings of the 1990s, Enron and WorldCom. About the time the paperback arrived in bookstores, the first of a long series of crimes at Enronâwhich would collapse in a spectacular scandal in 2001âhad begun. WorldCom's first significant crimes were still four years off. But those corporate names, and those dates, were the answer to the rhetorical question I had left with readers. Enron and WorldCom, facilitated by Wall Street investment banks eager to lap up fees, would be the next corporate villains, the next significant culprits in the long line of businesses that have turned to fraud and, in the process, wrecked the lives of untold numbers of Americans.

As I covered the unfolding Enron and WorldCom scandals for the New
York Times
âand later transformed Enron into a book,
Conspiracy of Fools
â at times, I could not help but think that we as a nation were reaping what we sowed. The outrage at Prudential had been just one in a long series of warnings about weaknesses in our financial system, signals that had all too long been ignored. I am something of a fatalist on this issueâas long as big money can be made from fraud, corporate scandals will always be with us. But even I would have thought that the embers from Prudential would have been long cooled before the next fire was lit. For all my pessimism, I was too optimistic.

Why did we learn nothing? Why did corporate America continue down this self-destructive path? To me, the answer is obvious: Despite the vast wreckage caused by Prudential's fraud, no individual was ever held accountable. No one went to jail, no individual was cited by the Securities and Exchange Commission. There were plenty of reasons whyâmostly revolving around the statute of limitations. But the limited government action contributed to the full story never being understood by much of the public.

Perhaps the biggest missed lesson was one for business itself. The Prudential scandal demonstrated in myriad different ways the damage inflicted on a corporation when managers fail to pay sufficient attention to protecting the brand name. Rather than simply facing what the firm had done and admitting it, Prudential launched a legal and communications strategy designed to conceal, deny, and mislead. That may have served the firm for a time in the courtroomâalthough I am hard-pressed to believe that Prudential would have been compelled to pay
more
than the billions it ultimately coughed up. But there is no doubt that this effort forever damaged the name Prudential, leaving it eternally linked to scandal.

The type of obfuscation strategy employed by Prudentialâand numerous other institutions wrapped up in such debaclesâoften backfires. The reason is simple: Regardless of how tainted a corporate culture becomes, most business executives
want
to do the right thing. They want those who do business with them to walk away happy with the experience and eager to return. They want, in short, to be part of an honorable institution, one that gives them pride.

That is why many widespread fraudsâparticularly those that damage individual customers and investorsâoften become public. Even if leaders of an institutionâwhether it be corporate, political, or governmentalâ decide to cover up, there are always people on the inside who, for a variety of reasons, will try to make sure the wrongs are righted. At both Enron and WorldCom, these types of whistle-blowers played important roles in forcing the scandals to the surface. Sometimes, whistle-blowers work through the system, going up the line of an institution in hopes of finding a remedy. When that fails, they will turn to outsidersâlaw enforcement, Congress, or sometimes reporters like me.

In the course of my coverage of the Prudential scandal, numerous executives stepped forward on a confidential basis to confirm key pieces of information, details I could never have learned from an outside source. Their motives varied: some were using the press for their own bureaucratic reasons, some were bitter, some were angry. But a surprising number were simply outraged by what Prudential had done, and had come to believe that only the truth would cleanse the company. Many of these executives had seen the destruction of the careers of other Prudential executives who tried to stop what was happeningâstories related in these pagesâand chose to no longer trust the institution with their concerns. Instead, they went outside the family with their evidence of wrongdoing.

Months into my reporting, there were executives at so many levels of the firm working with me that Prudential's secrets became easy to discover. When the firm was preparing to notify the SEC that subpoenaed records could not be located, a copy of those documents ended up in my possession. When a meeting was held at the highest reaches of the firm to discuss how to keep secret some potential litigation, I was made aware of the meeting, the decision, and the underlying legal claim before the week was out.

Prudential's method of dealing with this was almost funny: Repeatedly, senior executives of the firm would go on the internal squawk box, lambasting my reporting to Prudential's thousands of employees. It was a delightful miscalculation. I could always tell when I had been criticized to the employees; it was as if Prudential was advertising me to potential sources. For days after each squawk box statement, I would receive telephone calls from executives and employees in Prudential offices around the country, offering up leads and tips for stories that I might never have discovered.

The senior executives of Prudential dealing with this scandal never seemed to understand that truth was their ally. If they had simply stopped trying to deny what so many people inside the firm already knew, many of my sources of information would have dried up overnight. If they had stood up and taken responsibility for the horrible things that had happened there, they would have reinforced that the Prudential name still stood for integrity and honor, not obfuscation and deceit.

Moreover, they never would have had to deal with this book. I remember the moment I realized how necessary this book was. Prudential had finally cut a deal with criminal prosecutors, receiving a deferred prosecution agreement. Under that deal, the firm admitted violating the law and defrauding customers, and was put under what is akin to a form of probation.

I returned from that court proceeding eager to hear what Prudential executives had to say, now that the firm had confessed. In a telephone call, one of its senior executives dismissed the admission of guilt: that was just a business decision, the executive said. Everyone inside, he said, still knew that Prudential had done nothing wrong.

I hung up the phone, astounded. Clearly, Prudential planned to continue denying what the evidence showed. That knowledge lit a fire under me. I had to show the world, all in one place, everything that unfolded inside of Prudential.

So as you read the stories of the horrible secrets of Prudential, remember one thing: Many of these tales may well have stayed buried forever, if the firm had simply been honest once it discovered the extent of the wrongdoing inside. To paraphrase an epigraph of this book, Prudentialâ and Enron, and WorldCom, and all of the other corporations that have become enmeshed in scandalâare truly the authors of these tales. And, sad to say, they and companies like them will keep on writing such stories long into the future.