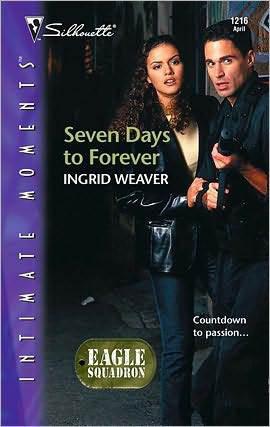 “Until this mission is over, consider me your shadow. Do you have a problem with that?” asked Flynn.

Abbie decided to clear this up right away—before it could go any further. “Not as long as you understand that our relationship isn’t personal. I don’t want to repeat what happened at my apartment the other night.”

“Check. No kissing or fooling around in bed. Got it.”

His blunt comment startled her into meeting his gaze.

Flynn watched her intently, his eyes gleaming. “Did I misunderstand what you were referring to?”

“No, you understood perfectly.”

“Too bad, Abbie. I enjoyed kissing you and being in your bed. I think you enjoyed it, too.”

This month we have something really special in store for you. We open with
Letters to Kelly
by award-winning author Suzanne Brockmann. In it, a couple of young lovers, separated for years, are suddenly reunited. But she has no idea that he’s spent many of their years apart in a Central American prison. And now that he’s home again, he’s determined to win back the girl whose memory kept him going all this time. What a wonderful treat from this bestselling author!

And the excitement doesn’t stop there. In
The Impossible Alliance
by Candace Irvin, the last of our three FAMILY SECRETS prequels, the search for missing agent Dr. Alex Morrow is finally over. And coming next month in the FAMILY SECRETS series:
Broken Silence,
our anthology, which will lead directly to a 12-book stand-alone FAMILY SECRETS continuity, beginning in June. In Virginia Kantra’s
All a Man Can Be
, TROUBLE IN EDEN continues as a rough-around-the-edges ex-military man inherits a surprise son—and seeks help in the daddy department from his beautiful boss. Ingrid Weaver continues her military miniseries, EAGLE SQUADRON, in
Seven Days to Forever
, in which an innocent schoolteacher seeks protection—for starters—from a handsome soldier when she mistakenly picks up a ransom on a school trip. In
Clint’s Wild Ride
by Linda Winstead Jones, a female FBI agent going undercover in the rodeo relies on a sinfully sexy cowboy as her teacher. And in
The Quiet Storm
by RaeAnne Thayne, a beautiful speech-disabled heiress has to force herself to speak up to seek help from a devastatingly attractive detective in order to solve a murder.

So enjoy, and of course we hope to see you next month, when Silhouette Intimate Moments once again brings you six of the best and most exciting romance novels around.

admits to being a sucker for old movies and books that can make her cry. A Romance Writers of America RITA® Award winner for Romantic Suspense, and a national bestselling author, she enjoys creating stories that reflect the adventure of falling in love. When she and her husband aren’t dealing with the debatable joys of living in an old farmhouse, you’ll probably find Ingrid going on a knitting binge, rattling the windows with heavy metal or rambling through the woods in the back forty with her cats.

O
ut of the hundreds of tourists who had passed by his post in the past hour, why should Flynn notice this one? Even if he wasn’t on duty, he shouldn’t have noticed her. Sure, she was attractive enough, in a compact, earth-mother type of way. Soft-brown hair, eyes the color of caramel, a hint of freckles on the tip of her small nose and a quick, coiled-spring energy to her movements. But she was the kind of woman who would want to meet a man’s parents. She had probably picked out a china pattern and two names for her firstborn. She was the kind of woman who usually made Sergeant First Class Flynn O’Toole of Eagle Squadron, Delta Force, break out in hives.

A spot just under his left shoulder blade developed a sudden itch. Flynn rubbed his back against the wooden bench. “I don’t think she’s our target.”

He barely moved his lips as he spoke. His words wouldn’t have been audible to a person sitting beside him, but the microphone under his collar had no problem picking up everything he said.

“She would be a good decoy.” The voice of Captain Sarah Fox, Eagle Squadron’s intelligence specialist, came through the pea-size receiver in his ear. “I wouldn’t underestimate her.”

Sarah had a point, Flynn thought. The brunette with the freckles would make an excellent decoy, since no one would suspect someone who looked that wholesome and innocent to be involved with a group of terrorists who were dedicated to the overthrow of the Ladavian government.

Then again, no one would expect a group like the Ladavian Liberation Army to be using the National Air and Space Museum for a ransom drop in the first place.

The woman hurried past the bench without giving Flynn a second glance. She headed straight for a pair of boys who were paused under the biplane that hung from the ceiling. For a moment all three of them craned their necks, gazing at the Wright Brothers’ 1903 Flyer with expressions of delighted awe. Then the woman herded the boys toward a group of more than a dozen chattering, fidgeting children.

Evidently, the woman hadn’t come to the museum alone, she had brought a classroom worth of kids with her. Unless the LLA had dropped their height requirements and were recruiting fresh-scrubbed seven-year-olds now, it was unlikely that the woman was involved. She was probably exactly what she seemed, a teacher on a field trip.

“Heads up. Vilyas just passed the front entrance.” The warning came from Flynn’s friend, Master Sergeant Rafe Marek. He was positioned outside where he could observe the approach to the building without attracting undue attention—Rafe’s scars tended to spook people who didn’t know him.

Although his posture didn’t change, Flynn’s senses went on high alert. Ambassador Vilyas was carrying the ransom himself, as the terrorists had demanded. The man was adamant. He would do anything for the safe return of his son.

If it had been any other case, the FBI would have handled it—Delta Force normally didn’t operate on American soil, and when they did, it was in the role of advisors to other law enforcement agencies—but this was no run-of-the-mill snatch.

Absolute secrecy was vital. Not only was Vilyas the Ladavian ambassador, he was married to the niece of the Ladavian king. If a child with royal blood was killed here, the delicate negotiations that were already underway to bring democracy to the strategic, oil-rich Balkan nation would be derailed. And if the media caught wind of what was happening, they might as well put on their silver suits because the political powder keg of Eastern Europe would blow.

So Ambassador Vilyas had demanded the best. He had insisted on nothing less than the legendary hostage-rescue expertise of Delta Force and the president had agreed. Which was why Flynn and the team of highly trained commandos from Eagle Squadron were spending the day scattered around one of the most visited museums in Washington, D.C., dressed in civvies to blend in with the tourists. The mission was straightforward: recover the Vilyas boy unharmed, hand the terrorists over to the Ladavians and keep the entire operation completely secret despite the few hundred bystanders with cameras who were wandering through the target zone.

A small, balding man Flynn recognized as Anton Vilyas walked past his bench. His features were sharper than they had appeared in the briefing photo. Exhaustion did that to people—the man reportedly hadn’t slept since his kid had been taken three days ago. Poor bastard looked to be near collapse. The top of his head gleamed damply and his fingers were white where they curled around the strap of the green canvas backpack he carried.

How heavy was twenty million dollars? Flynn wondered. Even in the large denominations the kidnappers had demanded, the weight would be substantial. He’d heard the entire amount of cash had been provided by the U.S. government, an indication of how vital they considered Ladavian goodwill…and the mission of Flynn’s team.

Vilyas reached the designated spot and stopped. It was hard to tell whether he intentionally dropped the pack or whether it simply slipped through his sweaty fingers. It hit the floor with a quiet thud, wobbled briefly, then slumped against the base of a trash can. The green backpack stuffed with twenty million dollars lay discarded like someone’s forgotten lunch. The ambassador walked away without a backward glance, just as he’d been instructed.