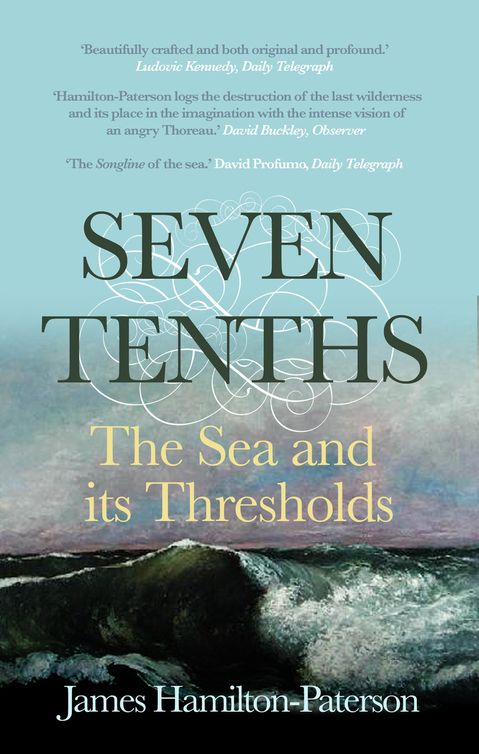 THE SEA AND ITS THRESHOLDS

Also
to the memory of
Ben Chong and Arnel Julao,
last seen on 20 December 1987
hoping to stow away aboard M/V
Doña Paz
in order to join their families
for Christmas

‘Nothing is more tedious than a landscape without names’

MARGINALIA
: The Isles of Britain

A stitch through the nostrils

Re-reading this book was both reassuring and sobering. It was reassuring to an author that so little needed to be changed after fifteen years, and sobering for the same reason. In that time marine science has moved on and fascinating new data have emerged; but nothing, I think, to alter radically my original standpoint. On the political front, one signal and welcome development has been the ban by both the UN and the EU on drift-net fishing. Nevertheless, the steely attrition of the world’s oceans proceeds at an ever-accelerating pace. Given the examples of well-monitored commercial stocks collapsing from over-fishing, the devastation currently being wrought by fishing fleets around the world is a spectacle that makes one wonder afresh at the hubris in styling ourselves
Homo sapiens.
Homo stultus
would have been more accurate taxonomy.

In the long run, of course, our present cavalier treatment of the oceans matters not a jot. However heedless our self-interest, the sea will survive. It will outlive us and remain the source and origin of the planet’s biota aeons from now. In any case, in writing this book I had no interest in producing an environmentalist jeremiad. On the contrary, I wanted to convey something of the affection, awe and often loathing that people have always felt for this mysterious body of water, both our cradle and the earth’s largest geophysical feature. The sea leaks unconsciously into even the most land-lubberly of us from time to time, and manages to leave its tide marks in cultures as in rocks the world over.

The few minor changes I have made to the original text for this new edition are nearly all updatings, and those mainly to the chapter on fishing. I have also added some footnotes to take account of things like new free-diving records or oceanographical data. The single new addition is the inclusion of ‘Sea Burial’, originally
published in
Granta
, which describes a sea voyage I once made in the tropics. Neither precisely reportage nor fiction, it was an attempt to express that strange borderland where the sea’s power to haunt sometimes seems as real a force as a wave’s kinetic energy.

I gratefully acknowledge the help given me in the writing of this book by the following:

I would like to thank the Institute of Oceanographic Sciences, Deacon Laboratory, and especially Mike Somers and Tony Rice for their courtesy and help. Above all, Quentin Huggett has been unfailingly patient and generous with his time, a prodigality which it is a pleasure to acknowledge.

My agents deserve â and get â my very warmest thanks for their tireless support and help, as does Patricia Reynolds.

This book's commissioning editor was Richard Cohen, and I am conscious that it owes everything to his original encouragement. To that extent it remains his. The task of taking it on fell to Neil Belton, my present editor. I could not have wished for a more sympathetic and astute interpreter of a project whose intentions must initially have appeared idiosyncratic and opaque.

Finally, my gratitude to Mark Cousins is not easily expressed. One hardly thanks a friend for friendship, but one might well wish to put on record the affectionate recognition of a great debt. The entire book was written very far from his scrutiny, but scarcely a line without awareness of his presence. Private congruences apart, there was for me an especial punctuality about his public lectures at the Architectural Association in London, 1990â1, which had a
profound effect on this book, just as the lectures had on all who heard them.

The above persons are exonerated from all responsibility for any errors of fact, judgement and taste, which are entirely my own.

Illustration acknowledgements
SEVEN-TENTHS
I am lost

I am lost …
These are the words the swimmer addresses in panic to the sunny universe into which he emerges, blowing water, disoriented. Ten minutes ago, perhaps twenty, he had set some fishing lines and slipped over the side of his tiny craft – a wooden insect with two bamboo outriggers – with a cord tying its prow to his ankle. He had been lying face down in the ocean, sun on his back, staring through the first thirty of a thousand metres of water. In the tropics these upper waters are flooded with light. Bright spicules drift past his eyes, crimson and electric blue, the jewelled phytoplankton streaming about the globe performing infinitesimal acts of chemistry which, much multiplied, succour all earthly life. By swimming down a couple of dozen feet he can look up and view other creatures from below: a shoal of garfish (whose bones are bright green) so high up their backs graze the rumpled mirror of air, the occasional flying fish breaking out and vanishing. The swimmer reflects on this mirror, imagining the sky weighing down on the sea and the sea holding up the atmosphere, curious about what exactly can be happening at the interface. If it were possible to magnify the activity, surely a buzzing skin of molecules would be revealed? Water molecules and air molecules so intermixed and saturated with atoms in common it would be undecidable which medium they constituted. At what point did these milling particles become waves? The swimmer loses himself in this quantum pun, in his speculations about boundaries, then suddenly an awareness breaks in that something is missing. There is a steady tug at his ankle, but too light. The long cord trails downwards, still firmly knotted to one foot. It is the boat which has gone.

His first act of panic is to spin in the water while trying to stand up in it: once, twice, three times, quartering a featureless horizon. Nothing. He is anchored by twenty feet of thin abaca hemp to the ocean. His masked face rams back through the surface as if by a miracle of

misplacement he might discover the boat floating at ease in a fourth dimension some fathoms below. Nothing. The cord hangs down like the corals called sea whips, slightly kinked, whiskers of fibre standing out clear in this awesome lens right to the bobble of the knot in its end. The word this knot transmits through the water is ‘adrift’.

The swimmer jerks his head up into the air again. Everything is plain. It is not possible, yet the boat has gone.
I am lost
. Panicked, he pants and spins, boatless, landless, and with the visceral ache of pure fear at what he has abruptly become: all alone and floating in the Pacific Ocean. Reason attempts to be reasonable. How far away could a boat possibly drift on a windless day? Also, eye level is barely six inches above sea level; a boat whose freeboard is little more than three times that could easily be hidden by the least swell. It is no doubt bobbing in and out of visibility even as he happens to scan the wrong horizon. … In any case, something altogether calmer is taking over: a lassitude, a fatalism whose roots reach back not to the beginning of his own life but, like the rope on his ankle, down into the sea itself. The twisted fibres, like ancient strands of DNA, connect him with vanished deeps, to primordial oceans lying in different beds. If he is lost now it is because he was already lost before ever setting foot in a boat, before infancy itself. He has no proper existence at all, being only a tiny hole in the water shaped like the lower two-thirds of a man. There is no way the tons of ocean can be held apart and prevented from filling the mould.

Yet it is not possible to give up, to go within minutes from being fit and happily occupied to renouncing life as if fatally injured. Fear returns in cycles. Looking around the liquid wastes beneath a brilliant sky he is set upon at intervals by the adrenal thought: This cannot be happening to me. …
But it is
. Then for a little while it is not; and in between assessing his chances of death by drowning, shark attack or exposure, into the swimmer’s mind comes a sharp, vainglorious image of his predicament. Lacking all coordinates, he sees his own head occupying a fixed place. He pictures it sticking out of that expanse of curved blue ocean, a little round ball burnished with sun like the brass knob on top of a school globe. In his moment of loss he becomes the pivotal point about which the entire Earth turns.

Ray & Me by Dan Gutman
Tengo que matarte otra vez by Charlotte Link
Dash in the Blue Pacific by Cole Alpaugh
Mr. Monk is a Mess by Goldberg, Lee
Playlist for a Broken Heart by Cathy Hopkins
27: Brian Jones by Salewicz, Chris
Out of Sight by Cherry Adair
Balance by Leia Stone
2Rakehell by Debra Glass
Outrageous Fortune by Patricia Wentworth
Our partner