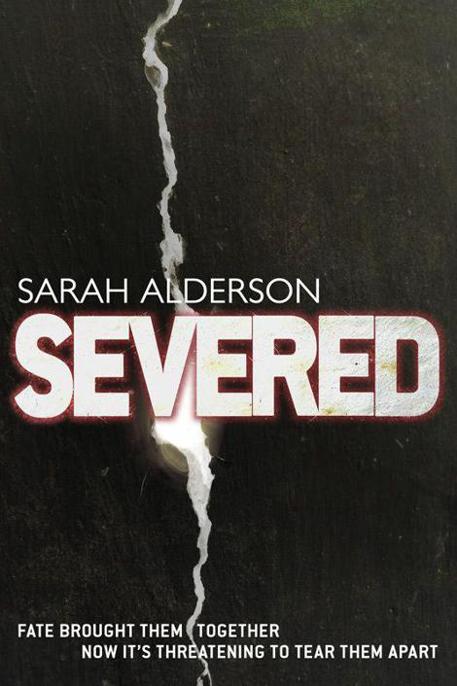 First published in Great Britain in 2012 by Alula Press

The right of Sarah Alderson to be identified as the author of this work has been asserted by her in accordance with sections 77 and 78 of the Copyright, Designs and Patents Act, 1988.

This book is a work of fiction. Names, characters, places and incidents either are the product of the author’s imagination or are used fictitiously. Any resemblance to actual people living or dead, events or locales is entirely coincidental.

The third book in the Fated series,
SHADOWED
.

World is crazier and more of it than we think.

The headlights of the car punctured the black blanket sky, illuminating rolling countryside which ceded eventually to the sprawl of suburbs and then finally to the brutal glare of the city. But Evie barely noticed. She didn’t even ask Lucas where they were going. As she clenched and unclenched her hands, which were still sticky with blood, all she could think about was what had happened back in Riverview. And about the dead they’d left behind.

She stared down at her bare feet, which were laced with dirt and mud and the stomach-churning remains of scorched Thirster flesh, and her teeth began chattering so loudly that Lucas reached over and cranked up the heat in the car to full.

Evie snuck a surreptitious sideways glance at him as he drove, his arms taut as they gripped the wheel. In the dim light from the dash he looked more unhuman than human. His eyes had a wolf-like intensity to them and his skin seemed to gleam and merge with the shadows. He was half human, half Shadow Warrior - able to pass in both worlds. But it was so damn obvious that he had unhuman blood in him that she couldn’t believe she’d never noticed it before. What kind of a Hunter was she? Even the way her body reacted when he was around – her heart thrumming in her chest like it was an animal trying to burrow its way free, her breathing running tight and fast - should have alerted her. Her brain and her body had been trying to warn her all along that Lucas was the enemy. But her heart had told her something else entirely, so she’d willfully ignored all the signs and shut out the sound of her instincts screaming.

Other than for the times his eyes flicked to the rearview mirror, Lucas hadn’t once lifted his gaze away from the road since they’d got in the car. He hadn’t said a word either. He was too focused on driving with his foot to the floor, as though they had an army of Thirsters and Mixen demons on their heels – which quite possibly they did but Evie didn’t want to contemplate that. She couldn’t. Not right now.

She sunk back into the cool leather of her seat and instead thought back to what Lucas had told her just a few hours ago in Victor’s boutique. He’d broken his oath to the Brotherhood for
her
. She knew the penalty for that was death, as did he. But he’d done it anyway, and all because he claimed to love her.
Did he?
Evie felt her heart stutter. He was here wasn’t he? He’d risked everything for her. He’d stood by her side as they’d fought off both Hunters and unhumans to escape Riverview. And, what was more, he believed that she was the one who was going to end the war that had raged for over a thousand years between unhumans and Hunters. Evie closed her eyes. Did she believe it too?

Her eyes snapped open. Lucas had parked up on a dark street. Evie looked out of the window. Where had Lucas brought her? She knew they were somewhere in Los Angeles and, judging from the scruffy state of the apartment block he’d parked in front of, they weren’t in the Beverly Hills part, but that was all she knew. She was about to ask him what they were doing there but he had already got out of the car. She watched him as he walked around to her side. He looked as if he’d been in a fight. Several fights actually. To the death. Which would be accurate. His dark hair was matted and sticking together in clumps. His shirt was ripped and streaked with blood – a red bloom just over his heart marked the spot where her own knife had pierced the skin. She shuddered at the memory of the tip scraping the bone and of what she’d almost done.

He opened her door and she climbed out, her muscles cramping then yelling in protest.

‘Where are we?’ she asked, taking in the deserted street. It was still dark outside. Dawn hadn’t even begun to lighten the sky.

Lucas didn’t answer her. He just took a deep breath, grimaced, and strode towards the entrance of the apartment block, looking over his shoulder once to check that Evie was following.

‘Whatever you do,’ Lucas said, shooting Evie a warning glance as he buzzed entry and then led her inside and towards a stairwell, ‘don’t tell them who you are – or
what
you are. They don’t need to know.’

Evie’s heart slammed to a standstill. She stared at Lucas, dazed. She had no intention of declaring to a total stranger that she was a half-trained Hunter with zero powers and a debilitating inability to actually slay any demons. And she had even less intention of announcing herself messiah-like as the White Light come to sever the realms. But who the hell were
they
?

She wished now that she’d asked him about his plan back when they were leaving Riverview. But they’d been in kind of a hurry.

Lucas was now leading her down a dingily lit corridor that smelt of cigarettes and burger grease. He stopped in front of a door with flaking paint.

‘Evie? Are you alright?’

She blinked, realising that she had come to a standstill in the middle of the corridor, her stomach in knots. She walked slightly unsteadily over to Lucas who was staring at her, his grey eyes dark and troubled. Stress was etched across his face, which was still so pale it made her stomach wrench, remembering.

‘Are you alright?’ he asked again, more softly.

She nodded in response. But it was a lie and he knew it.

Lucas pressed his lips together, still staring at her with that worried look on his face. His hand hovered for an instant by her cheek and her breath caught. He hadn’t touched her since she’d taken his hand and dragged him out of the alley, past Jocelyn, past Risper’s crumpled remains and past the scorched and oozing patches of earth where two dead unhumans had lain.

She leant in towards him, suddenly needing to feel connected to him, to get some kind of reassurance that he was still here, that he was real and wasn’t about to disappear or dissolve into the shadows. But just as she moved towards him his hand dropped to his side and he turned quickly away from her and slouched against the wall.

Was he having second thoughts? Was that it? After everything that had happened was he realising that protecting her was a losing battle? He’d almost died trying – was he finally starting to see sense? She wouldn’t exactly blame him.

She stared at him, frozen with uncertainty, anxiety seeping through her, but before she could say anything or do anything, the door in front of them flew open. Evie turned her head. A girl was standing there with her arms crossed over her chest. She was in her early twenties, Evie estimated – tall, slender but athletic looking. Also angry looking. The scowl on her face was enough to make Evie take a quick step backwards and start scanning the hallway for the exits.

She wondered if Lucas had got the wrong address. But when she glanced over at him she saw that he was smiling at the girl, almost roguishly, his head tipped to one side, looking up at her through lowered lashes. Evie frowned, confused by the smile and the casual but charming pose he was striking, before realising that he was trying to hide his bloodstained clothing and the fang marks on his neck.

‘Hi Flic,’ Lucas said in a drawl which made Evie wonder even more at how the two of them knew each other. He tilted his head in Evie’s direction, ‘This is …’

‘I know who she is,’ the girl snapped back.

Lucas’s smile vanished instantly and a shadow flitted across his face. Then just like that, without appearing to have even moved, he was standing up straight, filling the doorway, every trace of charm gone.

The girl visibly flinched, the scowl dropping away and her eyes growing wide as she took in Lucas’s ripped and bloodied shirt and his dark scowl. But then she tossed her hair over one shoulder and narrowed her eyes once more in a death glare.

‘Can we come inside?’ Lucas asked, ignoring her expression. His voice was so low it could easily have been mistaken for a threat.

Evie glanced up the corridor once more, wondering whether this was such a good idea. This girl knew who she was. And if she knew that, how could they be safe here?

The girl didn’t move out of the way, she just continued to glower at Lucas.

Evie thought about reaching out and taking Lucas’s arm and pulling him back. They could go somewhere else, anywhere – a motel even. She didn’t understand why Lucas had brought them here where obviously they weren’t welcome. But just as she was about to clear her throat and suggest that they leave, the girl huffed loudly and stepped to one side, revealing a dimly lit hallway behind her.

Evie guessed that was as much of an invitation as they were going to get. She looked at Lucas, who nodded at her without smiling and ushered her forwards, his hand pressed against the small of her back. It was the first time he had touched her since they’d run from the alley and the feel of his hand, the reassurance it gave, overrode her instincts which had started screaming. She ignored them though and let Lucas push her inside the apartment.

The girl stiffened as she passed her, flattening herself against the wall as if Evie was contagious. Evie’s gut clenched in response, the hairs on the back of her neck bristling. Something wasn’t right. She scanned the narrow hallway, her heart racing. There were five doors coming off it – all closed except for one door at the end, which stood slightly ajar. A thin strip of light was painting the patch of scuffed floorboard in front of it. She paused, her mouth running dry and the muscles in her back and shoulders locking. Her instincts weren’t just screaming now, they were yelling at her to turn and run.

Laurinda by Alice Pung
Lady Midnight by Amanda McCabe
Fire and Sword by Scarrow, Simon
A Bespoke Murder by Edward Marston
Stillness and Speed: My Story by Bergkamp, Dennis
Anne Morrow Lindbergh: Her Life by Hertog, Susan
A Prayer for Dead Kings and Other Tales by Scott Fitzgerald Gray
Should There Be (Vampire Assassin League) by Jackie Ivie
Giving It to the Monster (Saints and Sinners MC Book 4) by Crescent,Sam
An Old Heart Goes A-Journeying by Fallada, Hans
Our partner