Read Shadows on the Nile Online

Shadows on the Nile 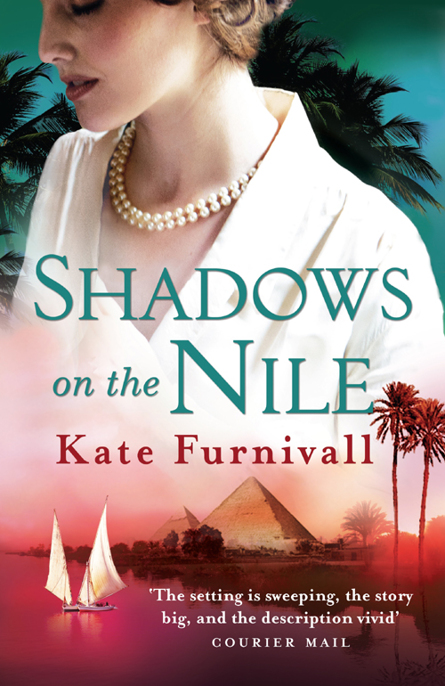 Kate Furnivall
was born in Wales, has worked in publishing and TV advertising and now lives by the sea in Devon with her husband, with whom she has two sons. This is her sixth novel.

Under a Blood Red Sky

The Jewel of St Petersburg

To Lilli
with all my love

A huge thank you to Catherine Burke and all at Little, Brown for their brilliance and for their enthusiasm for this book at every stage. They are a dazzling team. Particular thanks to Thalia Proctor for her sharp eyes on the copyedit.

To Teresa Chris for skilfully being my agent, a force of nature and my friend all at the same time – thank you.

Research trips are always fascinating, but I owe very special thanks to Richard and Anne Sharam for making my research journey through Egypt not only immensely valuable, but unforgettable fun.

My gratitude to Aml Demos for showing me her country and to Wendy Clark for delving into 1932.

Many thanks to Marian Churchward for deciphering my scribble and for lending me her name.

Warm thanks also to Anneli and Horst Menke for providing their beautiful garden for me to write in when I needed it.

Finally, my love and thanks to Norman for his help and support every sandy step of the way.

Kate Furnivall on Her Research Process

Stop it. Don’t do that.
Jessica rapped her knuckles against her forehead.

Don’t. You’re too old to be frightened by nothing. Too grown up. Seven years and eight months
. Not like little Georgie, her younger brother, who was tucked away by her parents in a tiny bedroom at the far end of the corridor. Like something dirty.

Still the noises came at her. Voices soft and secretive. A whisper cut short. Her mother’s quick and urgent footsteps on the landing. Other sounds that didn’t belong, that crept like thieves in the shadows. Jessica didn’t like the dark, and she could never understand how the air could become so solid at night or why its weight was sometimes so heavy on her chest that she had to pummel her lungs to make them work. She drew her knees up to her chin and wrapped her arms around her shins, hugging
her winceyette nightdress – the one with blue ribbons – tight against her skin. Even under her eiderdown she was cold.

Suddenly it came again, the sound that had woken her, a whimpering that made the blonde hairs rise on the back of her neck. She threw off the eiderdown and leapt out of bed. Her heart was juddering against her bony ribs as she pushed her way through the darkness, parting it with her hands like a curtain until she reached her bedroom door. She gripped its brass knob and quickly turned it. Nothing happened. Her fingers tried again. Nothing. It was locked. Jessica’s skin crawled, the way it did when a spider dropped on her arm.

Why would her father lock her in?

Why would her mother agree?

Fear, sharp and brittle, poked at her chest. She crouched on the floor and wriggled onto her side on the cold linoleum until her eye was pressed to the ribbon of light between door and floor, but she could make out nothing except a blur of carpet on the other side. Again the whimper fluttered along the landing, followed by a high-pitched frightened squeal. Rage seized her and she leapt to her feet, pounding her fist on the door, shaking it on its hinges.

Abruptly the light on the landing flicked off. Silence, thick and oily, flooded the house.

She banged on the wooden panels of the door.

She held her breath, listening so hard her ears hurt. Suddenly she heard a distant click. It was the front door closing.

Georgie liked the
park. He liked to stand next to the big round pond, the one with the fountain and the stone lion in the centre. Around it the railing was a frill of knee-high metal loops to keep children and dogs from falling in. Water lily pads spread out like green stepping stones and, if they were lucky, a dragonfly would dart in and out of them, bright as a rainbow.

Georgie would gaze silently for hours at the big slippery shapes of the goldfish that moved like ghosts through the water. His favourite was Watson, the one with the silver stripe down its back, but there were Watson’s friends as well: Farintosh, Armitage and Hatherley. The smallest one with the bite out of its dorsal fin was Mrs Hudson. Jessica had let Georgie name them all.

When he watched them, he calmed down. That’s what had happened today. She had stood beside him, not holding his hand exactly, but her fingers close to his at his side, and he had started humming. She knew then that he was happy. Happy in a way he couldn’t be in the house with people too close to him. But then Mummy had spoilt it.

Her mother frowned and sat down on the bench to read her magazine but her lips were tight and her ankles kept crossing and uncrossing. When she could stand no more, she said, ‘It’s getting late, time to go home.’

‘For heaven’s sake, George,’ his mother snapped, exasperated. ‘Enough staring like an idiot at fish all day. You’re five years old and should know better.’

Jessica grew nervous. She murmured to Georgie that Watson wanted to be alone now. She tried to coax her brother away, gently, one step at a time, but as always Mummy lost patience and seized his wrist to drag him from the railing.

Georgie had started to scream. Not like other children scream. He screamed as if he was dying, as if someone had taken an axe to him and sliced him right down the middle.

Jessica thought about it now, as she lay jammed against the door, clutching the blue ribbon of her nightdress. She
blinked fiercely on the floor in the darkness of her room, remembering her mother’s white lips. It was Georgie’s scream in the park that had slithered under her door and was now writhing inside her head.

The morning sun prodded her awake. She lifted her head from the hard floor and regarded the door with hostility. She scrambled to her feet, cold and shaky, and there was a greyness inside her head, like dust behind her eyes. It was without much hope that she grasped the knob and turned it. To her surprise the door opened easily, just as the grandfather clock in the hall downstairs struck eight. For a moment she panicked, because every morning she always got to Georgie first, to wake him and persuade him to wash and dress. Before Mummy.

She ran on tiptoe down the corridor to the door at the end and held her breath as she gently eased it open. She didn’t know what she expected to find, but her young mind was certain it would be something bad, something chaotic, something that would hurt her for the rest of her life. But a huge smile of relief nudged the fear from her face because everything was absolutely normal.

Her blue eyes grew round with pleasure as she inspected the small bedroom with its dark green curtains, its chest of drawers stacked high with books, the never-used cricket bat leaning against the wall. It was a gift from their father to push Georgie into a sport he hated. To be honest, Georgie hated all sports without exception, but to please her father Jessica had taught him to catch and throw a ball. It had taken infinite patience.

Nothing had changed. In the narrow bed lay Georgie. He was still asleep, his face buried in his pillow, but his glorious golden curls shone with life and one leg was thrown out from under his quilt. Jessica noticed he was wearing his red tartan pyjamas and she felt a tiny thorn of alarm prick at her throat. She knew that last night she had put him in his favourite blue ones. Georgie adored blue. Whenever he wore blue, he was better. Jessica had tried to explain this to her mother but she had said, ‘What nonsense!’ and bought him a red coat. Red was the worst, the very
worst colour. He was impossible in red.

He murmured into the pillow.

She approached the bed. With a laugh she tugged at his quilt but was careful not to touch him. ‘Wake up, sleepyhead.’

He turned to her and smiled.

‘Who are you?’ Jessica demanded.

‘You’re not Georgie! Get out! Get out of his bed.’

She took hold of the front of his pyjamas – of
Georgie
’s pyjamas – and yanked this impostor out of her brother’s bed. She shook him hard, her face furious. What did she care if this small boy cried? Or if his stupid shoulders trembled? Still gripping the pyjamas in her fists, she thrust her face right down to his.

She almost lifted him off his bare feet.

‘… Georgie? What have you done with my brother? Where have you come from?’

His blue eyes were swimming with tears but they glared at her defiantly. ‘I am Timothy.’ His small hand pointed at the bed. ‘That’s my bed. I live here.’

‘No, you don’t,’ Jessica shouted in his face.

Her own hands were shaking, her mouth so dry that words stuck to her tongue. But he nodded, his teeth clamped on his trembling lip. He nodded and nodded at her.

‘I am your new brother.’

His words were merciless. They reverberated
in Jessica’s ears as she flew downstairs and burst into the kitchen. Her mother was seated at the table with a cup of tea in front of her, spooning sugar into it. She never took sugar in tea. Her face looked grey and slack, and she was wearing the same fawn dress as yesterday. Usually her appearance was elegant and crisp and she was always nagging her daughter to be tidier or to brush her hair more, but today she had the unkempt appearance of Mrs Rushton – their cleaning lady who came on Mondays – and it dawned on Jessica that maybe her mother hadn’t been to bed.

She recalled the footsteps on the landing, the furtive whispers, and suddenly she knew what they’d done. The thought swelled, terrifying, in her head and she sucked in her breath.

Scorpion in the Sea by P.T. Deutermann
Playing Hooky (Paranormal Investigations) by Webb, Rita J
Rhys by Adrienne Bell
This Old Man by Lois Ruby
The Viscount's Rose (The Farthingale Series Book 5) by Meara Platt
Jigsaw by Sybille Bedford
Grains of Truth by Lydia Crichton
Last's Temptation by Tina Leonard
Havoc by Stella Rhys
A Pizza to Die For by Chris Cavender
Our partner