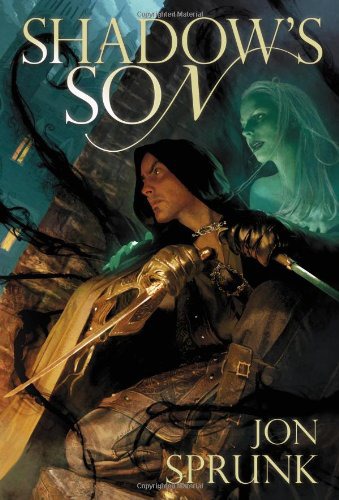 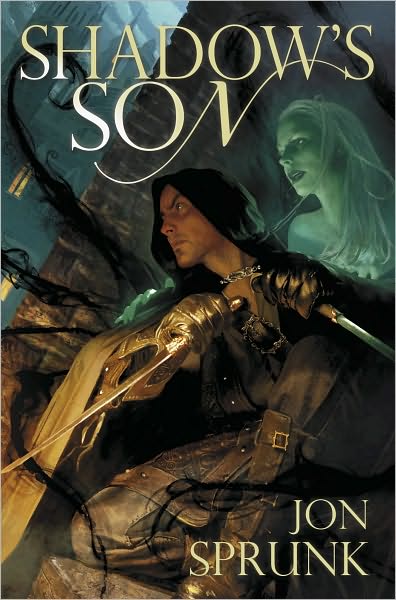 Published 2010 by Pyr®, an imprint of Prometheus Books Shadow's Son. Copyright © 2010 by Jon Sprunk. All rights reserved. No part of this publication may be reproduced, stored in a retrieval system, or transmitted in any form or by any means, digital, electronic, mechanical, photocopying, recording, or otherwise, or conveyed via the Internet or a Web site without prior written permission of the publisher, except in the case of brief quotations embodied in critical articles and reviews. Inquiries should be addressed to Pyr 59 John Glenn Drive Amherst, New York 14228-2119 VOICE: 716-691-0133 FAX: 716-691-0137 WWW.PYRSF.COM

This novel is dedicated to my wife, jenny,
Without whom none of this would have been possible,
And to our son, Logan,
Who is the twinkle in our eyes.

he author wishes to thank the following for their support
throughout this project:

To my father, who instilled in me a love for words.

To Lou, for turning the dream into reality.

To Eddie and Joshua, for their guidance and wisdom.

To Steve, Bruce, Dave, Adrian, Nicko, and Janick, for their inspiration through the years.

killer stalked in the shadows.

Hidden within the gloom shrouding the hall's lofty ceiling, he crept
across the rafters to the flicker of the torch fires below. As unseen as the
wind, silent as Death itself.

Festive music rose from the chamber beneath him. The flower of
northern Nimea, two hundred lords and ladies, filled the great hall of
Ostergoth Keep. The sharp crack of a whip cut through the din. The centerpiece of the evening was an aged hillman, stripped to the waist and
bound to a wooden frame. Livid welts oozing blood crisscrossed his shoulders and back. While Duke Reinard's guests gorged on fine victuals, his
torturer performed for their entertainment.

The bullwhip cracked again and the old man shuddered. The duke
laughed so hard he spilled wine down his ermine-lined robes and spoiled
the yellow dress of the pale, shuddering girl on his lap. She quivered as he
blotted at her bodice with a stained napkin and then squeaked at an indiscretion committed under the table. She tried to squirm away, but the
duke held her fast and laughed all the harder.

Calm's gloved hands curled into fists. It was time to go to work.

He dropped down to an empty balcony outthrust from the stone wall.
Crouched behind the railing, he unslung a satchel from his shoulder and
took out its contents. With sure movements he assembled a powerful bow
made from two curved shafts of laminated horn. He opened a lacquered
case and took out three arrows. Each projectile ended in brilliant indigo
fletching, the design favored by the hill tribes of eastern Ostergoth, as
requested by the client.

Caim fit an arrow to the string and lifted the bow. He took a deep breath as he sighted along the shaft. An uneasy sensation rumbled in the
pit of his stomach. Nerves.

He adjusted his aim to allow for distance and declination. The girl
managed to escape the Duke's lewd embrace, at least for the moment.

Don't worry, honey
.
Caim pulled the bowstring to full tension.
He won't
ever bother you again.

Just as he was about to shoot, his target leaned over to chortle into the
ear of a lovely noblewoman beside him. The duke's ringed fingers fondled
the strands of pearls looped across the lady's plunging d6colletage. Caim
held his breath and counted by the slow, measured rhythm of his pulse.

Any moment now, the Duke would sit up and present the perfect
target.

His aim was dead-on, his hands were steady.

A feathery tickle caressed his shoulders. Not taking his eyes off the
Duke, Caim caught a glimpse of silver.

"Hello, lover," her voice whispered in his ear.

"Putting another notch in your belt, I see."

He winced at the volume of her voice as it carried over the revel. It
didn't matter that no one else could hear her. She was throwing off his
cadence.

"I'm busy. Go find a nest of bunnies to play with until I'm done here."

Kit pressed her face against his cheek to peer down the arrow shaft.
Although he couldn't exactly feel her, tiny itches radiated everywhere she
touched his skin. A strand of her silver hair fell across his left eye. Caim
resisted the urge to blow it away, knowing it wouldn't do any good if he
tried, and strained the bowstring another inch.

"Bunnies live in holes, not nests," she said. "And you're aiming too low."

"You're going to miss his neck by half a foot."

Caim ground his teeth as the duke turned away from the noblewoman
to slap the back of Liram Kornfelsh of the Kornfelsh merchant syndicate. The syndicate was backing Duke Reinard to the hilt, hoping to ride his
rise to power all the way to the inner sanctums of the capital.

"I'm aiming for his heart. Now leave me alone for a minute."

Kit hopped up on the banister, as light as a butterfly in flight. Short
for a human woman, she possessed a figure out of any man's fantasies.
Tiny-waisted yet buxom, she had creamy skin with a faint olive sheen.
The dress she wore, tight-clinging with an absurdly short skirt, barely left
anything to the imagination. Caim supposed it made no difference, since
no one could see her but him.

Balancing on her bare toes, she clucked her tongue. "What if he's
wearing a coat of mail under that atrocious shirt?"

"The head is piled for penetration." Caim thrust his chin at the
arrow's reinforced point. "Anyway, he doesn't wear armor. Detests the
weight of it. That's why he surrounds himself with so many soldiers."

He rechecked his aim anyway. The duke was still manhandling his
guests. Caim wished he would sit up straight. His fingers were getting
numb.

Kit spun around and sat on the narrow railing. "For all the good
they'll do him. Are you going to finish this anytime soon? It's loud in
here. I can hardly hear myself think."

The duke leaned back in his chair, his shoulders framed by the wide
oaken back. Caim released the bowstring. In that moment, the target
glanced upward. Wine ran down Reinard's blubbery chins as their gazes met.

The arrow sped across the hall like a diving falcon. It was a perfect shot,
a sure kill. But just before it struck, the torchlight flickered. Cups tipped
over. Plates crashed to the floor. Calm's neck hairs tingled at the sight of
Liram Kornfelsh, sprawled in front of the Duke. The arrow's blue feathers
quivered above the emerald brooch nestled in the hollow of his throat.

Screams echoed off the hall's high walls as guests bolted from their
seats, all except for Kornfelsh, who they left lying across the high table
like an overstuffed ham. The duke grasped his hands together as his soldiers rushed to surround him.

The Culmination by Lauren Rowe
The Aquariums of Pyongyang by Chol-hwan Kang
Within the Cards by Donna Altman
His Dark Enchantress (Books We Love Regency Romance) by Chatham, Victoria
Con los muertos no se juega by Andreu Martín y Jaume Ribera
Rest For The Wicked by Cate Dean
In Over Her Head by Melody Fitzpatrick
Happy Ever After by Nora Roberts
A Fair Fight by Perkins, Katherine, Cook, Jeffrey
The Rebuttal: Defending 'American Betrayal' From the Book-Burners by Diana West
Our partner