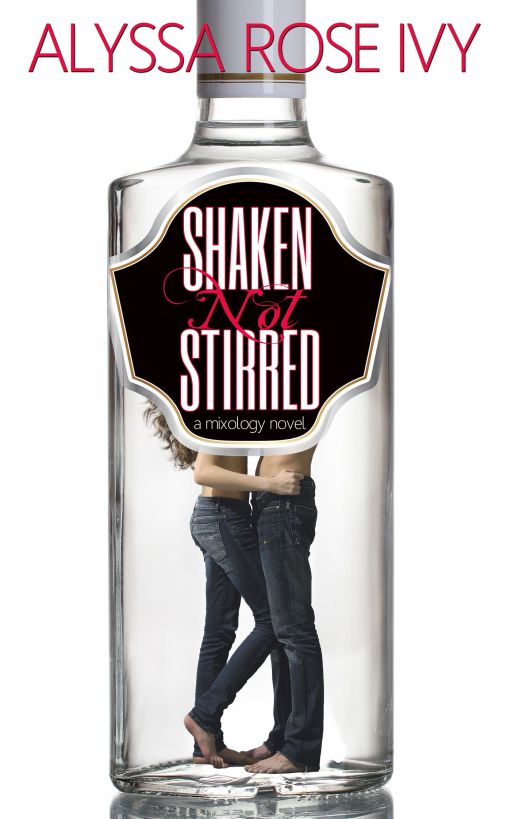 Cover Design: Once Upon a Time Covers

This is a work of fiction. Names, characters,
places, brands, media, and incidents are either the product of the
author's imagination or are used fictitiously. The author
acknowledges the trademarked status and trademark owners of various
products referenced in this work of fiction, which have been used
without permission. The publication/use of these trademarks is not
authorized, associated with, or sponsored by the trademark
owners.

This ebook is licensed for your personal
enjoyment only. This ebook may not be re-sold or given away to
other people. If you would like to share this book with another
person, please purchase an additional copy for each person you
share it with. If you are reading this book and did not purchase
it, or it was not purchased for your use only, then you should
return to Smashwords.com and purchase your own copy. Thank you for
respecting the author's work.

Other Books by Alyssa Rose Ivy

The
Hazards of Skinny Dipping

Sex on the Beach is overrated. I don’t mean
the carnal act, although I’ve heard the same thing about that, sand
in the wrong places and everything, but I’m talking about the
drink. With so many other drinks out there, why does everyone order
it? It’s the name of course. If you want to create a popular drink,
put “sex” in the name. Bottom line: sex sells.

I glanced up at my latest customer. He ran a
hand through his short brown hair. Wearing a pink polo shirt with
the collar popped, he was trying to pull off thirty, but my guess
was he was nearing forty. Without looking, I knew he was wearing
flip-flops with his khakis. Guys like him always did. They left
their suits at home, and tried to act younger and cooler than they
were. They usually spent their time hitting on younger girls, who
were looking for rich older guys to break the monotony of college
boys. I’d dated my share of those boys and understood the boredom,
but these losers weren’t any better.

“Sure.” I turned my back to him, pulling down
the glasses and going through the motions that were all too
familiar. When I first took the job bartending at Surfside Bar
& Grille in Corolla, North Carolina, I thought it would be a
good summer escape. It was almost Labor Day, and I wasn’t going
anywhere. The Outer Banks served my purposes just fine. What was
the point of picking up and leaving?

“Here you go.” I set the two pinkish-orange
drinks down in front of the suit and waited for him to slip me a
credit card. My guess was an American Express.

He slid me a Visa. I’d lost my touch.

“One’s for you.” He grinned at me, as though
he was telling me I’d won some great prize.

“Come on, don’t you like sex on the beach?”
He raised an eyebrow.

I knew exactly how to handle him. “I think
your friend misses you. You better bring over her drink.” I nodded
toward a blonde—bottle not natural—who was currently shooting me
daggers.

He didn’t bother to turn around. “I’d rather
talk to you a little longer.”

I leaned back against the far counter. “I’d
rather you didn’t.”

“And you’re wasting your time.” I wiped down
the counter, biding my time before another customer came over to
the outdoor tiki bar, or the guy got bored and found blondie.

“Have you worked here long? I don’t remember
you from last summer.” He tried to pull me into conversation
again.

“I wasn’t here last summer.” I didn’t bother
to turn around. That would just encourage him.

“Where do you go to school?”

“I don’t.” It had only been about three
months since college graduation. He didn’t need to know that.

“Oh. You kind of look like a college
girl.”

“What, her ass looks smart?” A low voice
called from behind me.

I smiled. There was no need to turn around to
know who had uttered the words. I’d been listening to that same
snarky attitude since before I could walk.

Suit wasn’t too happy with the interruption.
“Excuse me? Was I talking to you?”

“I don’t think so, but I happen to have a
close personal relationship with that ass, so I’d like to know why
you think it’s smart.”

I let a laugh escape and turned around. “Hey,
Macon.”

He took a stool right in front of me. “Hey,
this piece of work bothering you?”

“Are you two involved?” Suit still hadn’t
gotten lost. I guess I could give him points for
determination—although those points would get him nowhere with
me.

“We live together, don’t we, honey?” Macon
winked.

“Do you see?” Macon spun around on his stool.
“The other guy she lives with is in the kitchen.”

Thankfully I got another customer and didn’t
have to listen to any more of the conversation. Macon was sweet at
heart, but he tended to take things a step too far. He liked being
the center of attention, and he didn’t always care whether I felt
the same way. By the time I served another Sex on the Beach and two
Rum Runners, suit was hanging all over the blonde.

I leaned on my elbows in front of Macon. “Was
that really necessary?”

“What? I was just telling him the truth.”

He set down his glass. “One of these days
you’ll discover what you’ve been missing.”

“Thanks for the specifics. I wouldn’t want to
miss it.” It’s not like Macon wasn’t good looking. Not at all.
There were few girls that could resist the charming smile that
belonged to my brown hair, blue-eyed roommate. I was one of them.
My ability to joke about sex with Macon was a new thing. We kind of
broke the ice on it when we drunkenly kissed one night at a party
my sophomore year of college. It didn’t take long to realize
neither of us wanted that to happen again. We did, however, like to
joke about the possibility. I don’t know why, we just did.

He finished off his drink. “You’re laughing
now.”

“We’ll see about that. When you get cold this
winter, I know what bed you’ll be running to.” He crumpled up a
cocktail napkin.

“I just made a mental note to buy extra
blankets in case you shut off the heat.”

“Yes.” He wouldn’t. He’d be more likely to
turn up the heat so I wouldn’t get cold.

“Three Shark Baits and two Shirley Temples.”
Mary rested her tray on the bar. Of the waitresses at the grill,
Mary was my favorite. Sweet and funny as hell, she made the busy
summer nights move faster. We hung out every once in a while, but
she spent most of her time with her young daughter.

I busied myself making the drinks. The Shark
Bait was one of our signature tropical selections. Overpriced, and
pretty much only pineapple juice and peach schnapps, customers
usually cared more about the plastic shark attached to the cup than
the actual drink.

Right on schedule, Brody took a seat at the
bar. He always timed his break with the beginning of the first set
on Thursday nights.

I filled Mary’s tray, but she lingered. I got
the sense she was into one of my roommates, but I couldn’t tell
which. My bet was on Brody. She’d told me she had a thing for tall
guys. Macon wasn’t a small guy, but he looked tiny next to Brody’s
six-foot-three frame. Brody claimed his mom made boys big and that
his older brothers were actually bigger. I wasn’t sure if I
believed him.

“Really?” Brody looked down at his black
Surfside Grille t-shirt and then over at Macon. “It almost seems
like I’ve been cooking fish all night.”

I laughed, and Brody winked. “Give me my
usual, Maddy.” He took it in stride, but I knew how much he hated
his job.

“Like you have to ask.” I placed his Coke
down in front of him. He couldn’t drink at work, but really the
only time he drank alcohol was late at night once in a blue
moon.

He opened his straw. “Thanks. So do you have
your drink picked out for tonight?”

“Yeah, this week went fast.” I picked up some
empty beer bottles someone left on the other end of the bar.

“What do you think of all this?” Macon
treated Mary to his full attention. “Do you think Maddy’s ever
going to give up on this loser?”

“No. She’s dedicated. When a girl’s
dedicated, she never gives up on a guy.” She twirled a piece of her
reddish-blonde hair around her finger.

“I get that, but there’s an easy solution.”
He turned back toward me. “You know that right, Maddy?”

“Tell the guy you want to go home with him.
If he says yes, you’re in. If he says no, you had no chance to
begin with.” Macon laughed, letting me know he knew there wasn’t a
chance in the world I’d do it.

“Thanks.” Used to the ribbing by Macon, I
didn’t let it get to me.

“An Algonquin. I’m convinced he’s a whiskey
guy.” I left out my narrative on the history of the drink, those
usually didn’t go over well.

“Oh yeah? Should we plan the wedding? He
likes whiskey, so he’s got to be a catch.”

“Good luck, Maddy.” Mary smiled before
heading off to deliver her drinks.

From Morocco to Paris by Lydia Nyx
The Seary Line by Nicole Lundrigan
The Duchess and the Dragon by Jamie Carie
The Collected Short Stories of Louis L'Amour, Volume Six by Louis L'Amour
And I Don't Want to Live This Life : A Mother's Story of Her Daughter's Murder (9780307807434) by Spungen, Deborah
The Sibyl by Cynthia D. Witherspoon
Officer Off Limits by Tessa Bailey
Sanctuary Sparrow by Ellis Peters
Autoportrait by Levé, Edouard
Catharsis (Book 2): Catalyst by Campbell, D. Andrew
Our partner