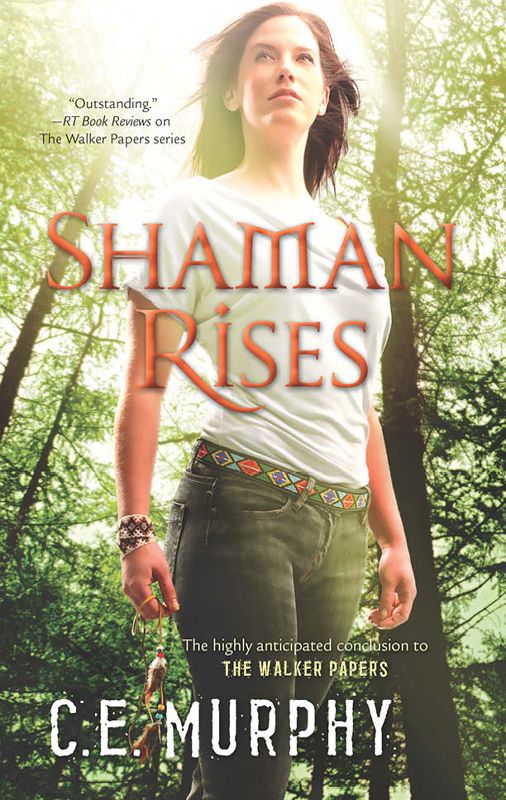 For over a year, Joanne has been fighting the Master—the
world’s most abiding evil entity. She’s sacrificed family, friendships, even
watched potential futures fade away…and now the Master is bringing the final
battle to Joanne’s beloved Seattle.

Lives will be lost as the repercussions of all Joanne’s final
transformation into her full Shamanic abilities come to her doorstep. Before the
end, she’ll mourn, rejoice—and surrender everything for the hope of the world’s
survival. She’ll be a warrior and a healer. Because she is finally a Shaman
Rising.

“The twists and turns will have readers shaking their heads
while devouring the next page.”
—USA
TODAY
on
Raven Calls

“A swift pace, a good mystery, a likeable protagonist,
magic, danger—
Urban Shaman
has them in spades.”
—Jim Butcher, bestselling author of The Dresden Files series

“Murphy’s fourth Walker Papers offering is another gripping,
well-written tale of what must be the world’s most reluctant—
and stubborn—shaman.”
—
RT Book Reviews

“Murphy carefully crafts her scenes and I felt every gust of wind
through the crispy frosted trees…. I am heartily looking forward
to further volumes.”
—
The Discriminating Fangirl

“An original and addictive urban fantasy!”
—
Romancing the Dark Side

“The twists and turns will have readers shaking their heads
while devouring the next page.”
—
USA TODAY

“Shaman Joanne Walker can’t seem to catch a break in the
penultimate chapter of Murphy’s outstanding and long-running series.… Her past and present collide in this emotionally charged novel
that illustrates Joanne’s unique evolution.”
—
RT Book Reviews
on
Mountain Echoes

HEART OF STONE
HOUSE OF CARDS
HANDS OF FLAME

…honestly, this one’s for me.

Back in Y2K when I wrote
Urban
Shaman,
I thought the Walker Papers would be a seven-book series.
They grew to nine with the sale of the first “trilogy”—people kept referring to
Urban Shaman, Thunderbird Falls
and
Coyote Dreams
that way—and very quickly I began to see
the story structure as three trilogies, with Joanne going through certain steps
of growing up in each of those trilogies.

I did not, frankly, ever expect it to span a total of eleven
books, if you include
Winter Moon
’s “Banshee Cries” as a book (and I do!), or the independent collection of Walker Paper stories,
No Dominion,
as part of the series (and I
certainly do!).

Eleven books is a lot, and while I know there are a fair number
of dedicated readers who reread the whole series when a new book comes out, I
thought I might offer up a quick, rather wildly inaccurate in detail but
reasonably spot-on in spirit, recap for you. A jaunt—with all due apologies to a
couple of boys—down the road so far:

Urban Shaman:
Former police
mechanic and now beat cop Joanne Walker is dragged into a world she doesn’t want
to know exists when a coyote spirit gives her the choice between death or life
as a shaman, after she’s skewered by Cernunnos, god of the Wild Hunt. She
chooses life (look, nobody said it was a good choice, just a choice) and races
to save a young woman named Suzanne Quinley from becoming a pawn in a game
between Cernunnos and his son Herne.

Winter Moon—
“Banshee Cries”:
Joanne’s boss and
love inter
—no,
no, no, he’s just the boss—pulls Jo on to a case of ritual murders, already
trusting her magic more than she does. But Joanne’s not the only one on the
case—her mother is back from the dead to protect Joanne from the banshee she
hunts and from the banshee’s master, whose dark magic is more than Joanne is
ready to handle.

Thunderbird Falls:
Despite two
mystical adventures, Joanne’s still got her head stuck firmly in the sand—if she
ignores her shamanic powers, maybe they’ll go away. They don’t, of course, but
there are ramifications to her ignorance: her beloved cab-driving friend Gary
Muldoon is witched into having a heart attack; relative innocent Colin Johannsen
and behind-the-scenes manipulator Faye Kirkland die trying to bring Joanne’s
increasingly dangerous enemy, the Master, onto the earthly physical plane; and
Seattle’s landscape is rearranged, creating a new waterfall on Lake Washington.
It is not Joanne’s finest hour.

Coyote Dreams:
No longer able to
pretend her shamanic powers haven’t changed her life, Joanne finally steps up.
But since her spirit guide, Coyote, hasn’t been responding since he saved her
ass in Thunderbird, Jo’s totally on her own when a Navajo maker god begins
putting Seattle’s police force to sleep. To her humiliation, her suspicions of
Morrison’s new girlfriend, Barbara Bragg, are (not wrongly) attributed to
jealousy. Even when Barbara and her twin brother, Mark, prove to be the god’s
avatars, Joanne’s not so much vindicated as horrified, because god-induced
visions make it clear that Coyote wasn’t a spirit guide at all, but another
shaman, who died to save her. In the end, though, she’s accepted that shamanism
is her future, and to reader outrage everywhere, she’s carefully turned down
Morrison’s relationship proposal in favor of becoming a detective on the police
force.

Walking Dead:
The Black Cauldron of
legend comes to Seattle, and with it come zombies. Suzanne Quinley makes a
reappearance and saves Jo from zombies by calling on her grandfather, Cernunnos,
god of the Wild Hunt. Unfortunately, it turns out even gods are susceptible to
the Master’s cauldron, and Joanne in turn barely saves Cernunnos and his home
world of Tir na nOg before she and her police partner, Billy Holliday, manage to
destroy the cauldron—through the willing sacrifice of Billy’s long-dead sister’s
soul, which he has carried with him most of his life.

Demon Hunts:
A lost human spirit
becomes a flesh-eating windigo, and, in seeking Joanne’s assistance, leaves a
stretch of murders making a beeline toward her. Coyote finally returns, alive,
in one piece, and runs straight into Joanne’s arms. Morrison has issues with
that. Joanne has issues when Sara Buchanan, now the wife of Lucas Isaac, the boy
who fathered the twins Joanne never, ever talks about, turns up as the federal
investigator on the case as it crosses into national park territory. Gary
totally saves the day, and Coyote, after asking Joanne to come with him, returns
to Arizona alone.

Spirit Dances:
Joanne’s partner,
Billy Holliday, is nearly killed on a routine investigation. Shooting the
perpetrator (not fatally) starts Jo on a slide to the realization she’s not
going to be able to be both a cop and a shaman. She accidentally transforms
Morrison into a wolf during a dance performance known for its healing powers. A
werewolf bites Joanne, causing her to go larking off to Ireland for a cure
immediately after quitting her job and declaring her love for Morrison. Readers
everywhere scream bloody murder at me.

Raven Calls:
A romp through time
and the Irish Underworld (what Joanne knows as the Lower World, albeit with a
different landscape) reveals Joanne’s dead mother as the new queen of the
banshees and sees Joanne fight off the werewolf bite with Coyote’s psychic
assistance. Joanne’s mother sacrifices everything to buy Jo just a little more
time in the fight against the Master.

No Dominion:
Gary’s history is not
at all as he remembers it: he and his wife, Annie, have been fighting the Master
longer than he ever knew, and Cernunnos guides him through an attempt to protect
Annie from the Master and change their future. Also includes several short
stories.

Mountain Echoes:
Joanne’s dad is
missing not just from North Carolina, but from the whole time line. As she tries
to find him, the Master finally gets a physical foothold in the Middle World
(our world), by way of going through Joanne’s twelve-year-old son, Aidan.
Morrison arrives with the best entrance in the whole series and saves the day,
and our star-crossed lovers finally get their moment together right before Gary
calls Joanne to tell him that Annie Muldoon is alive....

Shaman Rises:
Is in your hands.
Commence reading, ideally with
“Wayward Son”
wailing
on your mental soundtrack!

Zigzag Street by Nick Earls
Whats-In-A-Name by Roxie Rivera
Playing in SECRET (Corrigan & Co. Book 9) by Crystal Perkins
A Lady’s Secret by Jo Beverley
The Final Reckoning by Sam Bourne
It Will Always Be You (You Series Book 1) by Tina Ness
Pushed Too Far: A Thriller by Ann Voss Peterson, Blake Crouch
Ed McBain by Learning to Kill: Stories
Whose Life is it Anyway? by Sinead Moriarty
Heart Mates by Mary Hughes
Our partner