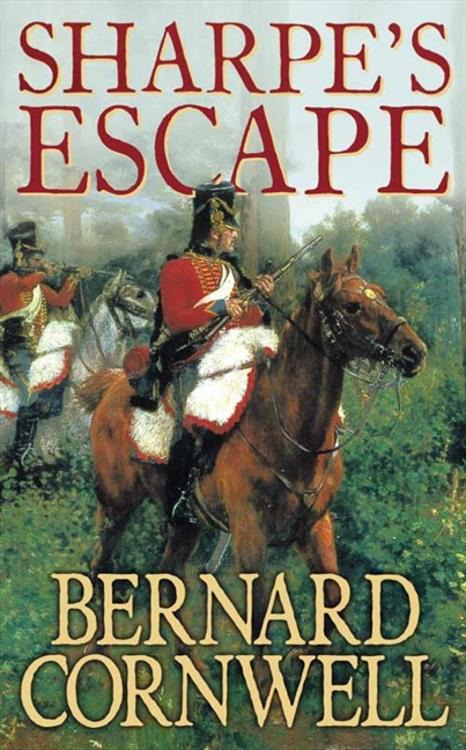 Sharpe's Escape
is for CeCe

Mister Sharpe Was in a Bad Mood. A filthy mood.

Robert Knowles and Richard Sharpe stood on the Bussaco ridge…

Sharpe slept badly. The ground was damp, it got colder…

Strangely, on the morning that the guns began to fire…

The village of sula, which was perched on the eastward…

The British and Portuguese army stayed on the ridge all…

This is splendid, Sharpe, quite splendid." Colonel Lawford paced through…

The first idea was to break through the trapdoor and…

A chief commissary came to inspect the food. He was…

Ferragus and his brother went back to the Major's house,…

The Lines of Torres Vedras

Marshal André Masséna was feeling numb. He was saying nothing,…

Sharpe struggled through the marsh to the edge of the…

The French invasion of Portugal in the late summer of…

M
ISTER SHARPE WAS IN A BAD MOOD. A filthy mood. He was looking for trouble in Sergeant Harper's opinion, and Harper was rarely wrong about Captain Sharpe, and Sergeant Harper knew well enough not to engage his Captain in conversation when Sharpe was in such a black temper, but on the other hand Harper liked to live dangerously. "I see your uniform's been mended, sir," he said cheerily.

Sharpe ignored the comment. He just marched on, climbing the bare Portuguese slope under the searing sun. It was September 1810, almost autumn, yet the heat of late summer hammered the landscape like a furnace. At the top of the hill, another mile or so ahead of Sharpe, stood a barn-like stone building next to a gaunt telegraph station. The station was a black timber scaffolding supporting a high mast from which signaling arms hung motionless in the afternoon's heat.

"It's a rare nice piece of stitching on that jacket," Harper went on, sounding as though he did not have a care in the world, "and I can tell you didn't do it yourself. It looks like a woman's work, so it does?" He inflected the last three words as a question.

Sharpe still said nothing. His long, straight-bladed cavalry sword banged against his left thigh as he climbed. He had a rifle slung on his shoulder. An officer was not supposed to carry a longarm like his men, but Sharpe had once been a private and he was used to carrying a proper gun to war.

"Was it someone you met in Lisbon, now?" Harper persisted.

Sharpe simmered, but pretended he had not heard. His uniform jacket, decently mended as Harper had noticed, was rifle green. He had been a rifleman. No, he still thought of himself as a rifleman, one of the elite men who carried the Baker rifle and wore the dark green instead of the red, but the tides of war had stranded him and a few of his men in a redcoat regiment and now he commanded the light company of the South Essex who were following him up the hill. Most wore the red jackets of the British infantry and carried smoothbore muskets, but a handful, like Sergeant Harper, still kept their old green jackets and fought with the rifle.

"So who was she?" Harper finally asked.

"Yes, sir," Harper said, grinning. He was an Ulsterman, a Catholic and a sergeant, and as such he was not supposed to be friends with an Englishman, a heathen and an officer, but he was. He liked Sharpe and knew Sharpe liked him, though he was wise enough not to say another word. Instead he whistled the opening bars of the song "I Would That the Wars Were All Done."

Sharpe inevitably thought of the words that accompanied the tune; "In the meadow one morning, all pearly with dew, a fair pretty maiden plucked violets so blue," and Harper's delicate insolence forced him to laugh aloud. He then swore at the Sergeant, who was grinning with triumph. "It was Josefina," Sharpe admitted.

"Miss Josefina now! How is she?"

"I'm glad to hear that," Harper said with genuine feeling. "So you took tea with her, did you, sir?"

"I took bloody tea with her, Sergeant, yes."

"Of course you did, sir," Harper said. He walked a few paces in silence, then decided to try his luck again. "And I thought you were sweet on Miss Teresa, sir?"

"Miss Teresa?" Sharpe said, as though the name were quite unknown to him, though in the last few weeks he had hardly stopped thinking about the hawk-faced girl who rode across the frontier in Spain with the partisan forces. He glanced at the Sergeant, who had a look of placid innocence on his broad face. "I like Teresa well enough," Sharpe went on defensively, "but I don't even know if I'll ever see her again!"

"Of course I would! But so what? There are girls you'd like to see again, but you don't behave like a bloody saint waiting for them, do you?"

"True enough," Harper admitted. "And I can see why you didn't want to come back to us, sir. There you were, drinking tea while Miss Josefina's sewing, and a fine time the two of you must have been having."

"I didn't want to come back," Sharpe said harshly, "because I was promised a month's bloody leave. A month! And they gave me a week!"

Harper was not in the least sympathetic. The month's leave was supposed to be Sharpe's reward for bringing back a hoard of gold from behind enemy lines, but the whole of the light company had been on that jaunt and no one had suggested that the rest of them be given a month off. On the other hand Harper could well understand Sharpe's moroseness, for the thought of losing a whole month in Josefina's bed would make even a bishop hit the gin.

"One bloody week," Sharpe snarled, "bastard bloody army!" He stepped aside from the path and waited for the company to close up. In truth his foul mood had little to do with his truncated leave, but he could not admit to Harper what was really causing it. He stared back down the column, seeking out the figure of Lieutenant Slingsby. That was the problem. Lieutenant bloody Cornelius bloody Slingsby.

As the company reached Sharpe they sat beside the path. Sharpe commanded fifty-four rank and file now, thanks to a draft from England, and those newly arrived men stood out because they had bright-red coats. The uniforms of the other men had paled under the sun and were so liberally patched with brown Portuguese cloth that, from a distance, they looked more like tramps than soldiers. Slingsby, of course, had objected to that. "New uniforms, Sharpe," he had yapped enthusiastically, "some new uniforms will make the men look smarter. Fine new broadcloth will put some snap into them! We should indent for some." Bloody fool, Sharpe had thought. The new uniforms would come in due time, probably in winter, and there was no point in asking for them sooner and, besides, the men liked their old, comfortable jackets just as they liked their French oxhide packs. The new men all had British packs, made by Trotters, that griped across the chest until, on a long march, it seemed that a red-hot band of iron was constricting the ribs. Trotters' pains, that was called, and the French packs were far more comfortable.

Sharpe walked back down the company and ordered each of the new arrivals to give him their canteen and, as he had expected, every last one was empty. "You're bloody fools," Sharpe said. "You ration it! A sip at a time! Sergeant Read!"

"Sir?" Read, a redcoat and a Methodist, doubled to Sharpe.

"Make sure no one gives them water, Sergeant."

The new men would be dry as dust by the time the afternoon was done. Their throats would be swollen and their breath rasping, but at least they would never be so stupid again. Sharpe walked on down the column to where Lieutenant Slingsby brought up the rearguard. "No stragglers, Sharpe," Slingsby said with the eagerness of a terrier thinking it had deserved a reward. He was a short man, straight-backed, square-shouldered, bristling with efficiency. "Mister Iliffe and I coaxed them on."

Sharpe said nothing. He had known Cornelius Slingsby for one week and in that week he had developed a loathing for the man that verged on being murderous. There was no reason for that hatred, unless disliking a man on sight was good reason, yet everything about Slingsby annoyed Sharpe, whether it was the back of the man's head, which was as flat as a shovel blade, his protuberant eyes, his black mustache, the broken veins on his nose, the snort of his laughter or the strut of his gait. Sharpe had come back from Lisbon to discover that Slingsby had replaced his Lieutenant, the reliable Robert Knowles, who had been appointed Adjutant to the regiment. "Cornelius is by way of being a relation," Lieutenant Colonel the Honorable William Lawford had told Sharpe vaguely, "and you'll find him a very fine fellow."

"Oh, Sharpe." Lawford had sounded exasperated. "There is no one more cognizant of your virtues than I. If there was a vacant captaincy…" He left that notion hanging, though Sharpe knew the answer. He had been made into a lieutenant, and that was something of a miracle for a man who had joined the army as an illiterate private, and he had been brevetted a captain, which meant he was paid as such even though his true rank remained lieutenant, but he could only get the real promotion if he either purchased a vacant captaincy or, much less likely, was promoted by Lawford. "I value you, Sharpe," the Colonel had continued, "but I also have hopes for Cornelius. He's thirty. Or maybe thirty-one. Old for a lieutenant, but he's keen as mustard, Sharpe, and has experience. Lots of experience." That was the trouble. Before joining the South Essex Slingsby had been in the 55th, a regiment serving in the West Indies, and the yellow fever had decimated the officers' ranks and so Slingsby had been brevetted a captain, and captain, moreover, of the 55th's light company, and as a result he reckoned he knew as much about soldiering as Sharpe. Which might have been true, but he did not know as much about fighting. "I want you to take him under your wing," the Colonel had finished. "Bring him on, Sharpe, eh?"

Blood in Grandpont by Peter Tickler
Lincoln: A Photobiography by Russell Freedman
A Crown of Lights by Phil Rickman
The Bomber by Liza Marklund
To Love Again by Danielle Steel
Fortunate Wager by Jan Jones
Ramage and the Dido by Dudley Pope
KC Frantzen - May the K9 Spy 02 - May Finds a Way: Peril in Paris by KC Frantzen
The Cage by Audrey Shulman
Heart Secret by Robin D. Owens
Our partner