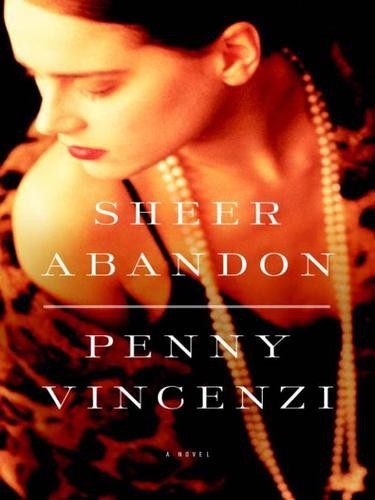 For my four daughters, Polly, Sophie, Emily, and Claudia, for every possible kind of help and support in a very long year.

I have been bothering even more people than usual in my quest for background information for
Sheer Abandon
; the book covers a rather large landscape. First of all, I would like to thank the many people who had been abandoned or adopted or given their own babies up and who shared their experiences with me so generously; and then the politicos, as I think of them, both MPs and political journalists, all of whom made the workings of the House of Commons feel both wonderfully intriguing and almost comprehensible; the lawyers and medics who answered all my questions so patiently; and of course everyone who shared their memories and experiences of traveling and backpacking with me.

I am very, very grateful to all those wonderful people at Hodder Headline who published the book so brilliantly in the UK; and to Tim Hely Hutchinson for welcoming me so warmly into the Headline fold.

And so much gratitude to Steve Rubin, publishing supremo, who has welcomed me equally warmly into Doubleday and the US fold; and everyone Over There who is publishing me with such inspired passion. Most notably, Deborah Futter, my editor, whose enthusiasm is a total joy; Dianne Choie, who keeps the nuts and bolts neatly lined up; and Alison Rich, who is making sure everyone the length and breadth of the United States knows about the book.

Huge thanks to Clare Alexander, my wonderfully supportive agent, and in memoriam Desmond Elliott, so well known on both sides of the Atlantic and who looked after me and my books for so long and is, I am sure, now brokering astounding deals at the great publishing lunch in the sky.

And, finally, my husband, Paul, so unfailingly there for me, so swift to respond to my frequent wails of despair, and so unselfishly ready to share in my (rather rarer) whoops of delight.

As always, in retrospect, it looks like a lot of fun. And I think it really was.

A
ISLING
C
ARLINGFORD,
one of Gideon’s ex-wives

A
RTEMIS AND ARIADNE,
her sisters

J
ACK
K
IRKLAND,
a politician and leader of the Centre Forward Party

B
OB
F
REAN,
her husband

People didn’t have babies on aeroplanes. They just didn’t.

Well—well, actually they did. And then it was all over the newspapers.

“Gallant aircrew deliver bouncing boy,” it said, or words to that effect, and then went on to describe the mother of the bouncing boy in some detail. Her name, where she lived, how she had come to be in the situation in the first place. Usually with a photograph of her with the bouncing boy and the gallant crew.

So
that
wasn’t an option.

She couldn’t have a baby on an aeroplane.

Ignore the pain. Not nearly bad enough, anyway. Probably indigestion. Of course: indigestion. Cramped up here, with her vast stomach compressed into what must be the smallest space in the history of aviation for what?—seven hours now. Yes, definitely indigestion…

Didn’t completely solve the situation though. She was still having a baby. Any day—any hour, even. And would be having it in England now instead of safely—safely?—in Bangkok.

That had been the plan.

But the days had gone by and become a week, and then two, and the date, the wonderfully safe date of her flight, three weeks after the birth, had got nearer and nearer. She’d tried to change it; but she had an Apex seat; she’d lose the whole fare, they explained very nicely. Have to buy a new ticket.

She couldn’t. She absolutely couldn’t. She had no money left, and she’d carefully shed the few friends she’d made over the past few months, so there was no danger of them noticing.

Noticing that she wasn’t just overweight but that she had, under the Thai fishermen’s trousers and huge shirts she wore, a stomach the size of a very large pumpkin.

(The people at the check-in hadn’t noticed either, thank God; had looked at her, standing there, hot and tired and sweaty, and seen simply a very overweight girl in loose and grubby clothing.)

So there was no one to borrow from; no one to help. The few hundred she had left were needed for rent. As it turned out, an extra three weeks’ rent. She’d tried all the things she’d heard were supposed to help. Had swallowed a bottleful of castor oil, eaten some strong curry, gone for long walks up and down the hot crowded streets, feeling sometimes a twinge, a throb, and hurried back, desperate to have it over, only to relapse into her static, whalelike stupor.

And now she had—indigestion. God! No. Not indigestion. This was no indigestion. This searing, tugging, violent pain. Invading her, pushing at the very walls of the pumpkin. She bit her lip, clenched her fists, her nails digging into her palms. If this was the beginning, what would the end be like?

The boy sitting next to her, as grubby and tired as she, whose friendliness she’d rejected coldly as they settled into their seats, frowned as she moved about, trying to escape the pain, her bulk invading his space.

“Sorry,” she said. And then it faded again, the pain, disappeared back where it had come from, somewhere in the centre of the pumpkin. She lay back, wiped a tissue across her damp forehead.

Not indigestion. And three hours to go.

“You OK?” The boy was looking at her, concern mixed with distaste.

They had landed; everyone was standing up, pulling their luggage down from the lockers. The moment had coincided with a very violent pain. She sat in her seat, bent double, breathing heavily. She was getting the measure of them now; they started, gathered momentum, tore at you, and then departed again. Leaving you at once feebly grateful and dreadfully fearful of their return.

Well, she hadn’t had it on the plane.

For the rest of her life, when she read of people describing bad experiences of childbirth, of inadequate pain relief, of briskly bracing midwives, of the sense of isolation and fear, she thought they should have tried it her way. Alone, in a space little bigger than a cupboard, the only pain relief distraction therapy (she counted the tiles on the walls, more and more as the time went by), her only companion a fly buzzing relentlessly (she worried about the fly, the dirt and disease it might be carrying, looked at it thankfully as it suddenly dropped, exhausted, on its back and expired). And then there were some brushes and mops and some clean towels—thank God for those towels, how could she ever have thought one pack of cotton wool would be enough? Her isolation was absolute, her only midwife herself and her precious book, propped against the wall as she lay on the floor, studying its explicitly sanitised diagrams desperately, heaving her child into the world. How could she be doing this, so afraid of pain she couldn’t have a filling without a local anaesthetic, so clumsy she could never fasten her own Brownie tie?

She managed because she had to. There was nothing else for it.

And when it was all over, and she had cleaned herself up as best she could, and the room too, and wrapped the baby, the tiny, wailing baby, into the clean sheet and blanket she had packed in her rucksack (along with the sharp, sharp scissors and ball of string and large bottle of water which was the nearest she could get to sterilising anything), she sat on the floor, slumped against the wall, feeling nothing, not even relief, looking at the baby, quiet now, but breathing with astonishing efficiency, its small face peaceful, its eyes closed.

It was over. She had become a mother; and in a very short while she would be one no longer, she could walk away, herself again, free, unencumbered, undisgraced.

She could just forget the whole thing. Completely.