Read Sherlock Holmes and the King of Clubs Online

Sherlock Holmes and the King of Clubs 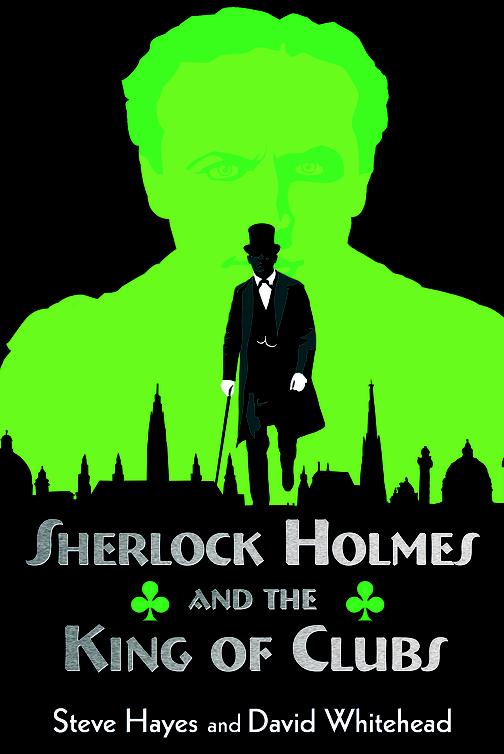 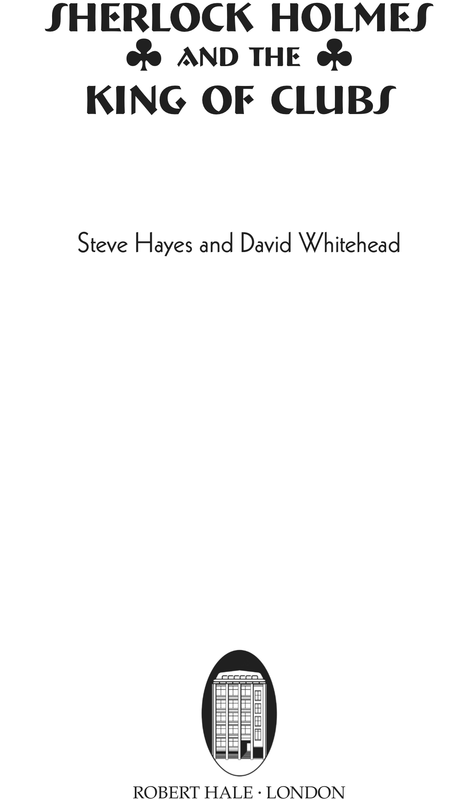 For Robbin and Janet
This King for Two Queens

T
HAT MORNING’S AUCTION
had gone just like a thousand auctions before it, until it came to Lot Thirteen.

Then, knowing that this was what the overwhelming majority of his audience had been waiting for, the auctioneer allowed himself a dramatic pause, leaned forward over the podium and scanned his congregation through a pair of small, rolled-gold pince-nez.

More than a hundred expectant faces peered back at him, then turned almost as one when an elderly porter in a buttoned brown warehouse coat entered the room through a door in the left-hand wall. He shuffled to one of six polished-oak plan chests that stood side by side along the rear wall.

The room fell quiet but for the squeak of his boots on the parquet floor and the odd expectant turning of a catalogue page.

The porter pulled out the first large, shallow drawer and carefully set it down on one of three trestle tables in front of the auctioneer’s podium. Heads immediately craned forward to get a closer look at its dog-eared contents.

The audience watched in respectful silence; the only movement among the predominantly male audience came from the pipe and cigarette smoke that curled slowly toward the ornate, nicotine-stained ceiling.

At last the auctioneer spoke, his cultured voice echoing around the wood-panelled room. ‘Gentlemen—’

He broke off, almost immediately, in order to acknowledge the only female in the audience: a tall, slender spinster in a beige
two-piece
woollen walking suit. Though her face was hidden beneath the veil that hung from the brim of a torque hat adorned with two ostrich plumes, she inclined her head in thanks.

‘
Lady
and gentlemen,’ he continued with an indulgent smile, ‘we now come to Lot Thirteen, the first of thirty such lots being auctioned here today on behalf of the widow of the late and
much-respected
architect, Sir Andrew Montefiore.

‘The architecture of the Habsburg Empire, with its eclectic mixture of baroque, Renaissance, neo-Gothic and Romanesque, is of course of tremendous interest to scholars, historians,
architects
and aesthetes alike. It was particularly fascinating to Sir Andrew, whose collection of ephemera upon the subject is considered by many to be among the finest in the world.

‘Like its subject, the Montefiore collection is also of a somewhat eclectic nature. It includes personal papers, monographs, sketches, prints, maps, plans and cyanotypes relating to a wide variety of building projects undertaken during the period in question. A conservative estimate suggests that,
in toto,
the collection contains some 75,000 separate items relating to the lives and works of such luminaries as Filiberto Luchese, Johann Lukas von Hildebrandt, Ludovico Burnacini, Joseph Emanuel Fischer von Erlach and, in particular, Joseph’s father, Johann Bernhard Fischer von Erlach.

‘As is well known, Fischer the elder began his architectural career in 1687, and during his lifetime undertook major commissions from Joseph I, Charles VI and the Archbishop of Salzburg among others. His instructions were not only to replace many of the buildings damaged during the Great Turkish War, but also to represent through the medium of architecture the absolute power of the monarch Leopold I, as well as that of the Roman Catholic clergy.

‘Thus, he was responsible for such buildings as the Schöenbrunn Palace, Schloss Klessheim, the Glam-Gallas Palace,
the Dreifaltigkeitskirche, the Kollegienkirche, and the Winter Palace of Prince Eugene of Savoy. Additionally, he made a most notable contribution to the Imperial Palace of Hofburg in Vienna.

‘An original manuscript of Fischer’s book on architecture,
Entwurf einer Historischen Architektur,
dating back to 1721, is being offered separately in Lot Forty-Two of today’s proceedings. Lot Forty-Three consists of an additional 25,000 glass plate negatives produced by George Washington Wilson and Company which date from the 1860s.’

He gave his audience a moment to absorb his introduction, then said: ‘In Lot Thirteen, you will be bidding upon the cornerstone of the collection, a selection of—’

Before he could go any further, however, there was a sudden commotion at the rear of the room. Two men who had been seated in the back row sprang up, one of them pulling a handkerchief up over the lower half of his face as he shouted, ‘Don’t move, any of you!’

Naturally everyone moved. As the gathering turned in their seats, there were demands to know what was happening.

By then both men had stepped into the aisle. The taller, leaner of the two, his features also hidden behind a crude handkerchief mask, ran to the door, where he stood holding a Webley Mk IV revolver. The cries of protest quickly faded when the audience saw the gun.

The man’s shorter, fatter and older companion also produced a weapon – an ugly, angular, self-cocking Webley-Fosbury – and hurried to the front of the room, the glittering eyes above his mask seemingly looking everywhere at once.

‘What is the meaning of this, sir?’ the auctioneer demanded.

‘Shut up!’ the fat man hissed. He, like his companion, was dressed in a nondescript black suit, white shirt and black tie, and had donnned the hat previously resting in his lap to make further identification more difficult. What the auctioneer could see of his face looked very pale, almost sickly. He wore glasses – small round lenses set in tortoiseshell frames – and the eyes behind them were cold and spiteful, the colour of chocolate.

‘Do as I say and you will live!’ he told everyone. ‘Cross me and
you will regret it!’

His English was excellent, but the auctioneer sensed that it was not his first language. It was too clipped and precise, and allowed for no trace of the vernacular.

A strained, uneasy silence descended over the room. The auctioneer exchanged a helpless look with the scribe seated at a roll-top desk behind him, who had been faithfully recording the sales of the day. The elderly porter looked equally at a loss as to what to do.

Stuffing the revolver into his waistband, the fat man quickly rifled through the contents of the first of the six plan chest drawers. The dry, urgent crackle of old paper was now the only sound in the room.

Clearly he was searching for something specific.

When he did not find it in the first drawer, he went to the second and again searched it quickly but efficiently. Uneasy murmurs came from the trapped audience behind him.

When the fat man searched the third drawer he found what he was after. He took a folded sack from his pocket, opened it and began filling it with the contents of the drawer.

The fat man silenced him with a warning glance. He continued filling the sack until he had everything he wanted, and then turned to the audience.

‘We are leaving now,’ he announced, his glasses reflecting the watery October daylight filtering in through the tall sash windows. ‘And lest one of you “gentlemen” get the urge to follow us or sound the alarm before we are safely gone, we shall be taking one of you with us as a hostage.’

Instantly there were cries of indignation. The fat man grabbed his Webley and aimed it at the audience, silencing everyone.

‘
You
,’ he said softly to the only woman in the room.

She looked around, as if thinking he was addressing her by mistake. Then, realizing that he wasn’t, her dark hazel eyes grew alarmed and she gave a tiny gasp of fear.

At once the elderly gentleman seated beside her stood up, saying, ‘You
cad!
How dare you intimidate this poor woman—’

The fat man sprang forward and struck him viciously on the head with the butt of his gun. The elderly gentleman collapsed in his seat, bleeding from his forehead.

Though horrified, the woman bravely turned to aid the injured gentleman.

She glared at him, her veiled expression a mixture of fear and defiance. Then, realizing she had no real choice in the matter, she stood up, clutched her tapestry purse more tightly, and with as much dignity as she could muster stepped into the aisle.

The fat man grabbed her by the arm and turned to the audience. ‘All of you, listen to me. No harm will come to this woman as long as you do as I say.’ He glanced at the old yellow-faced clock on the wall. The time was a minute past eleven. ‘If you have any concern for her welfare, you will make no attempt to raise the alarm until half-past the hour. I have men watching this building. If they see anything to suggest that you have not given us the time we require to make our getaway, I will shoot this woman, and her death will be upon the conscience of every man here. Do you understand me?’

There came a few grudging affirmatives.

‘Do you understand me?’
the fat man repeated loudly.

‘Yes, we understand,’ the auctioneer replied grimly. ‘I will make sure you have the time you need. But I promise you this: when you are brought to book it will be my great pleasure to testify against you.’

But the robbers and their hostage were already hurrying to the door through which the porter had entered, and all the audience could do was watch helplessly as one after the other they disappeared into the bowels of the building.

Impulsively the auctioneer called out, ‘Have courage, madam!’

The last he saw of her was the woman looking back at him, her expression one of abject terror.

It was the last time anyone would ever see the tall, slender spinster again.