Sherlock Holmes and the Zombie Problem 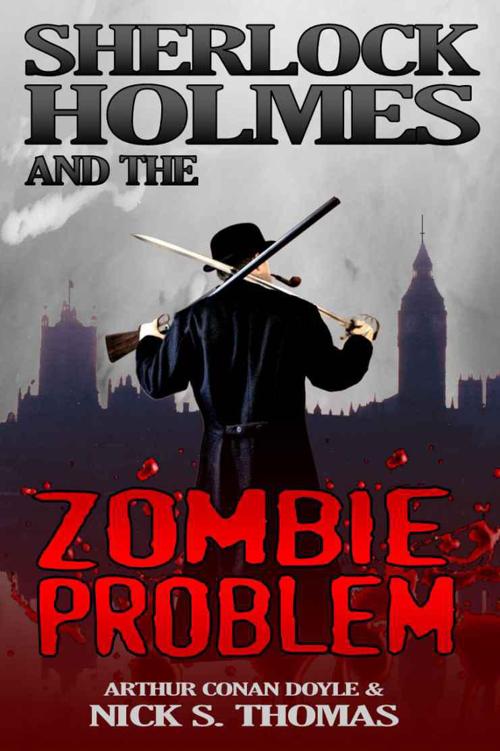 Sherlock Holmes and the Zombie Problem

All rights reserved
No part of this publication may be produced, stored in a retrieval system, or transmitted in any form or by any means, without the prior permission in writing of the publisher, nor be otherwise circulated in any form of binding or cover other than in which it is published and without a similar condition including this condition being imposed on the subsequent purchaser.
First published in Great Britain by Swordworks Books
A catalogue record of this book is available from the British Library
Cover design by Swordworks Books

It is with a heavy heart that I take up my pen to write these the last words in which I shall ever record the singular gifts by which my friend Mr. Sherlock Holmes was distinguished. In an incoherent and, as I deeply feel, an entirely inadequate fashion, I have endeavoured to give some

account of my strange experiences in his company from the chance which first brought us together at the period of the “Study in Scarlet,” up to the time of his interference in the matter of the “Naval Treaty”—an interference which had the unquestionable effect of preventing a serious international complication. It was my intention to have stopped there, and to have said nothing of that event which has created a void in my life which the lapse of two years has done little to fill. My hand has been forced, however, by the recent letters in which Colonel James Moriarty defends the memory of his brother, and I have no choice but to lay the facts before the public exactly as they occurred. I alone know the absolute truth of the matter, and I am satisfied that the time has come when no good purpose is to be served by its suppression.

Numerous accounts of that fateful time littered the newspapers, with the police and army rightly being honoured. However, as far as I know, there have been only three accounts in the public press: that in the Journal de Geneve on May 6th, 1891, the Reuter’s despatch in the English papers on May 7th, and finally the recent letter to which I have alluded, which at all mention my dear friend Holmes. Of these the first and second were extremely condensed, while the last is, as I shall now show, an absolute perversion of the facts. It lies with me to tell for the first time what really took place between Professor Moriarty and Mr. Sherlock Holmes.

Before I begin this tragic and yet triumphant tale of events, I first feel obliged to explain the attributes of what have come to be known as Zombis, or Zombies, how they came about, what they are and what lead to their demise. It is commonly accepted that the driving force in making ordinary people in to flesh-eating monsters was purely viral, and of no more explanation in terms of origin that most viruses or diseases of our day. However, events and information gathered over time have firmly proven to me otherwise, in a fashion as a doctor, I would never have believed, had I not experienced this adventure first hand.

It was first in a cafe in Geneva that I ever heard the word ‘Zombi’ used, by an old friend of mine, Dick Burton, who from all known knowledge, should not have been alive to be conversing with me at all. Upon meeting said creatures and with and subsequent exchanges with such beings that he explained the myth and rumour surrounding them that he had learnt from his travels; and finally admitted to their existence. In summary, Dick Burton told us (being me and Mr Holmes) this information:

In the depths of Africa lies a mystic tradition named Vo dou, and within this culture a dead person can be brought back to life by some form of magician or sorcerer, known to them as a Bokor, and that these humans brought back from the dead are called Zombis. Zombis remain under the control of the bokor since they have no will of their own. The creatures are neither living nor dead, but some form of monster, given life by spirits or magic.

These Zombis feature the same shape and size of a human but with soulless expressions and appear to completely lack feeling or emotion, including fear and pain, only interesting in their task of destruction. They seem to attack those at their masters will, and whilst being no stronger than a human, fight with a frenzy and determination which would make you think otherwise. Whilst many of the ‘Zombis’ appeared to attack at specific targets, others carved a path of destruction in what appeared to be a random manner, but in all other ways, resembled the earlier creatures.

As for the spelling of their name, Dick Burton was very sure of the spelling Zombi, it is only unfortunate that the English newspapers were unwilling to accept that the spelling of the word could end so abruptly, and am therefore forced to use the misspelling on the cover of my work in order to be understood by my audience.

No Englishman, short of those with much liquor in them, would give such a story any credence, with Dick Burton never being short of harsh words for stories of such twaddle, and yet, before our very own terrified eyes, did we experience such a nightmare, and at least part of my story was witnessed by many Englishmen firsthand. I will tell this tale from when I first became involved in it, the evening Holmes reappeared in my life.

It may be remembered that after my marriage, and my subsequent start in private practice, the very intimate relations which had existed between Holmes and myself became to some extent modified. He still came to me from time to time when he desired a companion in his investigation, but these occasions grew more and more seldom, until I find that in the year 1890 there were only three cases of which I retain any record. During the winter of that year and the early spring of 1891, I saw in the papers that he had been engaged by the French government upon a matter of supreme importance, and I received two notes from Holmes, dated from Narbonne and from Nimes, from which I gathered that his stay in France was likely to be a long one. It was with some surprise, therefore, that I saw him walk into my consulting-room upon the evening of April 24th. It struck me that he was looking even paler and thinner than usual. Holmes was in his early forties, and yet looked like a man who could have been ten years more senior.

“Yes, I have been using myself up rather too freely,” he remarked, in answer to my look rather than to my words; “I have been a little pressed of late. Have you any objection to my closing your shutters?”

The only light in the room came from the lamp upon the table at which I had been reading. Holmes edged his way round the wall and flinging the shutters together, he bolted them securely.

understand that I am by no means a nervous man. At the same time, it is stupidity rather than courage to refuse to recognise danger when it is close upon you. Might I trouble you for a match?”

He drew back his jacket to pull his cigarette tin from his waistcoat pocket, revealing a leather holster with his typical firearm of preference, clearly indicating he considered the situation a dangerous one. Knowing I was also still wearing my handgun from earlier that day was a comforting thought, as Holmes did not fret unduly. I handed him a match and he drew in the smoke of his cigarette as if the soothing influence was grateful to him.

“I must apologize for calling so late,” said he, “and I must further beg you to be so unconventional as to allow me to leave your house presently by scrambling over your back garden wall.”

“But what does it all mean?” I asked.

Amaretto Flame by Sammie Spencer
The End of the World Running Club by Adrian J Walker
The Ballad of Tom Dooley by Sharyn McCrumb
Notable (Smith High) by Bates, Marni
All Backs Were Turned by Marek Hlasko
The Traiteur's Ring by Jeffrey Wilson
Atlantis Rising by Michael McClain
Givin' Up The Ghost (An Indigo Eady Paranormal Mystery) by Gwen Gardner
Suddenly a Spy by Heather Huffman
Long Hair Styles by Limon, Vanessa
Our partner