Read Sherlock Holmes: The Shadow From Beyond Online

Sherlock Holmes: The Shadow From Beyond 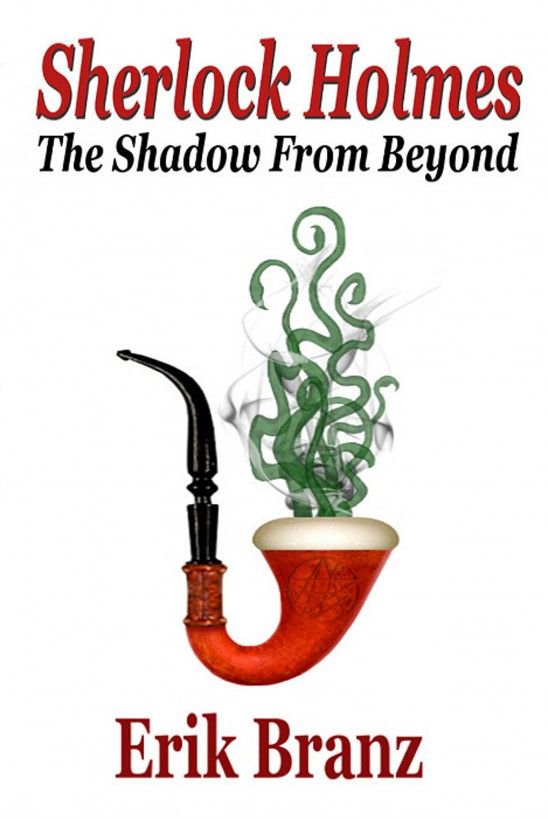 Published by Erik Branz at Smashwords

Sherlock Holmes
The Shadow from Beyond

Sherlock Holmes: The Shadow From Beyond is a work of historical fiction.

All of the contemporary characters in the novel are the product of the author’s imagination.

Without limiting the rights under copyright reserved above.

No part of this publication may be reproduced, stored in or introduced into a retrieval system or transmitted in any form or by any means

without the prior written permission of both the copyright owner and the book publisher.

This is a work of fiction. Names, characters, places, brands, media and incidents are either the product of the author’s imagination or are used fictitiously.

The author acknowledged the trademarked status and trademark owners of various products referenced in this work of fiction which have been used without permission.

The publication/use of these trademarks is not authorized, associated with or sponsored by the trademark owners.

great literary authors, without whose works this novel would not exist.

I thank them for their imagination and inspiration.

Personal thanks go to my Mom and Dad

and the friends who have supported me throughout the writing of this novel.

This work is in no way authorized by the estates: Arthur Conan Doyle or H.P. Lovecraft.

It is purely a work of fiction and the fictional creations of these authors are used for that sole purpose alone.

Sherlock Holmes: The Shadow From Beyond
Prologue

Iridescent globes floated within the fog of his clouded mind, a jumble of light and movement that continued without pattern. Chaotic. He was assailed by the rich scents of mold and earth as they crept through the barrier that was unconsciousness. There was a frenzied beating, an anarchic rhythm that resonated about him, through him.

In the background he could barely distinguish the low audible mumbling of foreign words, phrases of language that he could not decipher. He moved his body ever slightly, pain shot up his side and across his back, it was uncomfortable but helped bring him out of his stupor. Slowly, ever slowly he regained his senses.

Then the dream state left him and Watson suddenly awoke, slightly dazed yet much confused. The throbbing and painful headache that accompanied his consciousness did not assist matters. He glanced about his surroundings, his eyes attempting to re-focus within the low lit area he found himself. Clarity slowly replaced the blur of colored spots that had danced before him, details were forming, reality returning.

It all washed over him then, the memories of a not so distant past. He sighed as the weight of it all fell back upon him. Could this not just be a nightmare he could wake from? A bad dream brought on by indigestion or something similar?

Unfortunately for the doctor it was all as real as the pain in his temples; sharp and distracting.

Still underground no doubt he surmised; the dampness of the air, the smell of earth and decay, the pressure of thousands of pounds of rock about him.

Watson lay upon a folding cot in a small cell, three earthen walls and one barred with iron surround him. Outside this barred wall was another small alcove, empty save for the burning torch ensconced in the wall and the ring of rusty keys hooked upon a spike besides. Both are well out of arm’s length, unreachable. Cool stale air flowed inward from a tunnel that exited the alcove into shadowed darkness beyond.

He gently turned his throbbing head to better examine his surroundings as best as possible. A simple wooden table and two rickety chairs were positioned against one of the dirt walls of his prison; the table was bare of any object other than some old scraps of writing paper. The rest of the cell was empty save for a shadowy figure hunched at its center.

A man is crouched near to the floor facing away from Watson. The figure was scrawling hurriedly on the stone floor with some crude writing tool, all the while mumbling a strange foreign verse.

Above all else, Watson heard a frenzy of drumming accompanied by the sounds of tribal chanting that resounded towards him from the earthen passage beyond. The high pitch of piping flutes had intermixed with a cacophony of psychotic beats to create audible chaos.

Deep below him in the bowels of the earth, a rumbling of tremors had begun, a shaking of the ground that increased in strength with each passing second.

The huddled figure at the center of the cell worked feverishly now, and he muttered under his breath words Watson could finally understand.

“Quickly! Quickly!” the man spoke. “Before time runs out! Before all is lost!”

The voice seemed familiar to Watson, comforting in a way. He focused his gaze upon the shadow before him and his eyes widened as he recognized the man that crouched just a few feet away. He attempted to rise from the cot, his head still a cloud of dizziness as he exclaimed. “You. You! Is it really you my old friend? Thank the gods, you live! I surely thought you lost Holm..e…s...”

His words faded off as he became overwhelmed by light headiness and fatigue. Watson swooned and collapsed onto the cot and back into unconsciousness, into dreams and the memories of when this nightmare had all begun…

The Game is Afoot

“Watson! Watson my dear chap. Watson! Wake up!” Holmes exclaimed as he addressed his old friend from across the chaotic study they shared at 221b Baker Street.

Apparently the good doctor had dozed off while reading the Morning Post, which now rested on his chest, lightly rising and falling with each deep breath. With his slipper covered feet propped up on a footrest in front of the crackling fire he seemed the perfect example of calm respite.

“Watson!” cried Holmes again in a slightly louder and more forceful tone. With that came the abrupt end to Watson’s repose as his eyes quickly snapped open. Slightly groggy from his nap the doctor looked up to his flat mate Sherlock Holmes with seeking eyes, his facial expression a mix of enquiry and befuddlement.

“So sorry to wake you from slumber old chap. There is nothing like a few mid-day winks to re-energize the body. But it seems we will soon have a visitor, so brush away those sleepy cobwebs won’t you Watson as I may be in need of your assistance.”

Holmes had the drapes pulled aside and was gazing down into the bustling crowds of Baker street from his usual perch. The morning sunlight cut across his distinct facial features; the high cheekbones, the tight pursed lips, and the hawk-like nose, all in common sharpness to his recently pressed suit and slacks. One of his favorite pipes smoked away in his right hand, and the air was thick with its exotic tobacco. Watson noticed Holmes’ eagle like eyes attentively scanning the daily activity spread out in the busy street below.

“A police coach has stopped at our threshold, our companion in crime solving soon to join us.” Holmes mentioned as he opened the window to allow a cool breeze to waft through the study. Watson, aroused by the fresh air brushed himself off as if literally covered in silk threads, hoisted his bulk from the armchair he occupied and shuffled over to join his companion at the window. Sure enough Inspector Lestrade of Scotland Yard was stepping out of the police carriage below them; he wore a concerned visage as he looked upward at the pair.

Within a few minutes the diligent Mrs. Hudson had shown Lestrade into a room he had become very familiar with over the years, one of intellectual chaos: Piles of papers and stacks of books, discarded scientific apparatus, curios, souvenirs, and memorabilia of multiple adventures littered the study area. The atmosphere of the place reeked of Sherlock Holmes, and not just due to the heavy scent of pipe tobacco that floated upon the air, this cluttered environment was an extension of his persona, each item an important element of the whole.

Lestrade’s visits to 221b had occurred at more frequent intervals over the last few years, this mostly due to the rapidly rising crime rate in the growing metropolis of London proper and Lestrade’s constant need for Holmes’ advice in these matters. It was October of 1909 and the Summer Olympics held in London the year before had attracted many people to the city seeking fame and fortune or simple entertainment, and although over and done with, many had stayed behind, greatly swelling the capitol’s citizenry.

Like any other expanding major metropolis in the world, the increase in population brought with it an increase in criminal infractions and Lestrade and his officers had their hands full. From muggings to murder and all sorts in between, the city was rife with lawlessness and misdeed.

Mrs. Hudson showed the Inspector into the study of 221b Baker Street, smiled and closed the door. The two occupants turned to Lestrade who huffed and puffed, his face a bright red. He then deeply gathered in the air that had escaped his lungs as he had ascended the stairwell.

Over the last few years Lestrade’s moustache had expanded, as the crime rate had, growing wider and thicker, and on par it seemed with his waistline. He was now pleasantly plump, if one could ever refer to Lestrade as pleasant. His ample belly reflected the rewards of success credited to him and his Scotland Yard staff in the apprehension of those criminals. These results were actually and often based on the hard work and diligent efforts of Sherlock Holmes, consulting detective, who had used his tremendous insight to solve most of those incidents for Lestrade, who was well outside his abilities in most of the cases. Holmes, always the gentleman, had allowed the inspector to reap the public benefits that should in truth have been lauded upon himself. The detective instead preferred to enjoy the quiet praise of those he had directly aided and the financial compensation that was often associated with such praise. He had very little to no interest in celebrity and appreciated the thrill of the hunt over public adoration.

A Is for Abstinence by Kelly Oram
Kate Sherwood - Dark Horse 1.1 - Sometimes You Just Know by Kate Sherwood
The Baby Surprise by Brenda Harlen
Chasing Forevermore by Rivera, J.D.
Wild Irish Heart (The Mystic Cove Series Book 1) by Tricia O'Malley
Barbara the Slut and Other People by Lauren Holmes
Head Wounds by Chris Knopf
Rising Tides by Taylor Anderson
The M Word by Farr, Beverly
One Fine Day in the Middle of the Night by Christopher Brookmyre
Our partner