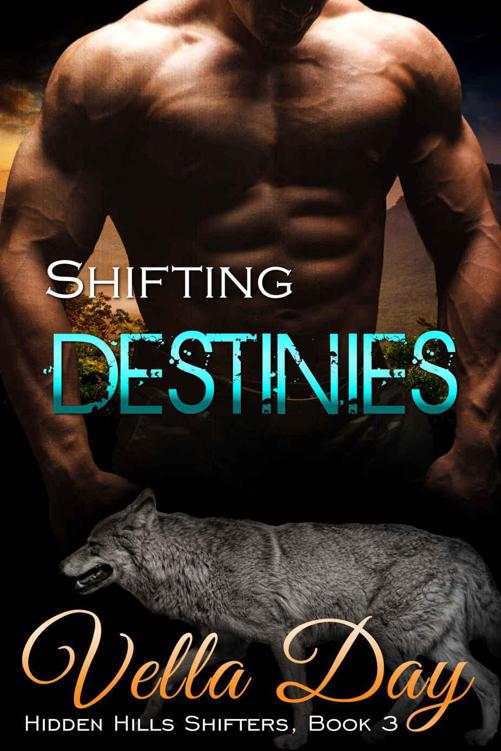 E
mmaline Nettles sank
back against one of the round tables at her best friend’s wedding to fan her face then polished off her third beer. She’d been dancing for hours, and while her feet were tired, she was content. Cheyenne Snow-Durant made a beautiful bride. Chey’s dad was the Alpha of the cheetah Clan, and as such, needed the largest venue in Hidden Hills, North Carolina, for his daughter’s wedding. That meant they were in the Town Meeting Hall, a metal Quonset Hut-shaped structure that had a stage on one end and a wall of glass doors on the other. Several women of the Clan had gone all out on the decorations. The jungle theme wouldn’t have been Emmaline’s first choice, but the green vines and fake flowers helped cover the corrugated walls nicely.

Em spotted Chey winding her way through the dancers, heading straight toward her. “Have you danced with Wade yet?” Chey asked, looking radiant.

Emmaline laughed, but it was mostly for show. “Not yet.”
Please, don’t push
.

Cheyenne gave her arm a squeeze and then let go. “Remember, it’s a cheetah tradition to dance with everyone at the wedding reception. If you do, you’ll find happiness and wealth for the coming year.”

Em didn’t believe in superstition, especially one that involved true love and prosperity—not to mention that it was a cheetah tradition and she was a wolf. “I’ll keep that in mind, but I believe I’ve touched base with almost everyone else.”

Chey looked over Em’s shoulder and smiled. “Ooh, here’s your chance to make it one hundred percent. He’s heading your way, girlfriend. Gotta go.” Chey leaned over, kissed her cheek, and then disappeared back into the crowd.

Em didn’t need her friend to tell her who was right behind her. She could feel his power, his scent, his presence. She was, after all, a shifter with an intense sense of smell that surprisingly hadn’t been diminished by all the festivities and swirling romance.

To make matters worse, her inhibitions had plummeted. She wasn’t sure if it was from the few beers she’d had, or the fact Wade Black was there. Something about this bear shifter got her motor running, and that was bad. Wolves weren’t supposed to give his clan the time of day—at least that was what her family had always drilled into her.

Her nerves shot to life. She turned around and tried to smile, but her uncooperative lips wobbled. Wade, with his whiskey-smooth voice, was like a stealth bomber. He worked out of town, but would swoop in every few weeks to do whatever he needed to do before disappearing again. “Hi, Wade.”

He held out his palm. “We haven’t danced.”

That had been by design. She didn’t trust herself around him.

He raised his brows, looking hopeful—and sexy as hell. While she was dewy from all the dancing, he looked cool and elegant in his black tux. Add in broad shoulders, whiskered cheeks, along with a lock of dark hair flopped over his forehead that she wanted to push back, and most women would have swooned. Not her, of course. Emmaline wasn’t interested in playboys.

Not that she’d been paying attention, but Wade had worked the room tonight, speaking with everyone, especially the single ladies.

He lowered his hand to his side looking a bit dejected, and guilt pummeled her. Em couldn’t think of a way to get out of this dance gracefully, so she sucked it up and wrapped her arm around his. “No, we haven’t.”

He grinned. Ever since the two of them had worked together to bring his best friend, Burke, and her other best friend, Tasha, together, she’d been unable to get the big bear out of her mind. She wished she could figure out why. He wasn’t the type of man she was looking for. She liked serious, and Wade loved to joke and play. Em wanted financial security, but Wade seemed to flit around the country, doing who knew what.

“Come on.” He slid her hand down to his and led her onto the dance floor.

No sooner had they worked their way between the dancers than the song turned slow. Well, shit. She looked over her shoulder, thinking she would find a guilty looking Chey who’d purposefully requested the music to throw her and Wade together, but the newlyweds were in each other’s arms, sharing a loving moment. Clearly, Fate was being a pain in the ass tonight.

“How have you been, Emmaline?” His words were slow and seductive, or else her mental faculties were a bit impaired from the alcohol.

“Working hard and getting by.” That about summed up her life since she was little.

His smile reached his eyes, lighting up a few of her body parts, before she managed to tamp down the desire. The last time he’d been in town was two months ago for his dad’s birthday. Not that he’d ever asked her out, but she wasn’t into long distance dating.

Wade enfolded her in his arms. When he drew her even closer, every inch of her curvy body molded against his, and lust slammed into her so hard she had to lean back for air.

The pressure from his grip let up. “Sorry. I didn’t mean to hold you so tight.”

She was hardly a delicate flower, but because she was rather short and had ample curves, people tended to think that she needed taking care of, and that was the furthest thing from the truth. She could watch out for herself, mostly because she’d been the youngest of four girls, which had made her resilient and independent.

Wade nodded to Tasha and Burke. “Looks like our mediation worked between those two.”

“It sure did.” They were happily living together now, and it wouldn’t surprise Em if Burke popped the question soon.

Wade had come running when she’d called him a few months back, which counted for a lot in her book. Things had turned rocky between Tasha and Burke, and together she and Wade had hatched a plan to get the lovebirds back together. It wasn’t his fault that when Wade had gone to collect Burke to drive him over to Tasha’s that his friend had already left town. The misunderstanding between the two had since been resolved, and now Tasha had a permanent grin on her face.

The pace of the music picked up and Wade moved her gracefully around the floor. “You still liking the law office?” he asked.

She couldn’t remember telling him what she did for a living, but perhaps Burke had mentioned it. “For the most part I do, but Mr. Francolini is getting on in years, and his client list is dwindling.”

She was his paralegal, but more and more her boss relied on her to do other things—like pick up his dry cleaning, make his doctors’ appointments, and follow up with his clients.

“That’s a shame.” He sounded sincere.

Wade fingered the hair that trailed down her back, and his soft touch sent sparks straight to her nipples. That wasn’t good. It made her mind wander to places where it shouldn’t go—like two naked, sweaty bodies entwined in a passionate embrace.

“Did you come to town just for the wedding?” she asked.

“I did.” He seemed to hesitate.

That meant he’d probably head back to wherever he lived tomorrow. The song ended, and she looked up at Wade. His face blurred, forcing her to blink a few times. The close quarters, coupled with the heat, were getting to her.

He smiled and wrapped an arm around her waist. “Let’s get you some fresh air.”

“Okay, but I need my purse. I think I should be going, anyway. Wasn’t that the last dance?”

He chuckled. “Don’t ask me. I’ve never been to a cheetah-human wedding before.”

He walked her toward her table where she picked up her bag.

Wanting to say goodbye to the bride, she looked around, but noticed Cheyenne was talking with her dad and a group of the other cheetah leaders. Not wanting to disturb her, Emmaline decided she’d call her friend when the newlyweds returned from their honeymoon.

Wade led her outside. The now-cooled August night air was refreshing to her overheated body and helped a bit to clear the haze her mind had been in, but it would take at least eight hours of sleep for her body to return to normal. She straightened, and on the next step, her ankle twisted. Stupid high heels. Had Wade not had his arm around her waist, she might have tumbled.

“Thanks.” She glanced around. When she’d come early to help out, only a few cars had been in the lot. “My car’s somewhere. Now where did I park?”

Without a word, he led her to a nicely decked out black extended-cab truck and opened the back door. “You’ve had a few drinks, and because I want to be certain you arrive home safely, I’ll drop you off at your place. You can stretch out in the back where you’ll be comfortable.”

“I never said you were.” He chuckled, clearly not believing her.

He shut the door then slipped into the driver’s seat. What the hell? She wasn’t some misbehaving child who had to be put in the back seat and escorted home. Emmaline sat up and leaned forward. She was about to complain then thought better of it. A ride home wouldn’t be terrible. The problem was that being this close to him had reignited her inner animal. Sometime during the dance, she’d decided she wanted him—at least the wolf part of her did.

Liar
.
Okay, maybe the human part did, too.

This encounter would end the moment he dropped her off, so she needed to move fast. She’d wanted to feel the bristles on his face for a while now. No particular reason; she just did, so she reached out her left hand and cupped his cheek.