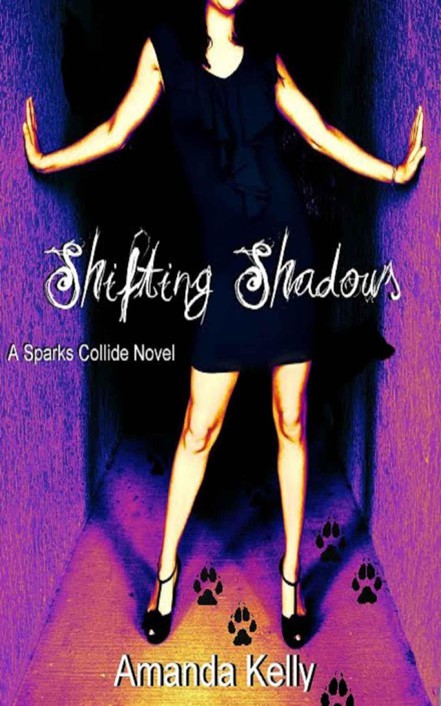 Words cannot express how grateful I am
to have such an amazing support system behind me.

It is with the love of my mother that
this book was made possible. Thank you, Mom.

Thank you to all of the readers. I hope
you enjoy Kira and Jay’s journey.

“You know, Jay. If you gave half as
much attention to your responsibilities as you did to your cell phone, I
wouldn’t be so sorely disappointed in you.”

I looked up slowly.

“You know Dad, if I believed you actually
cared about me more than living up to the family name, I’d care.”

We stared each other down at opposite ends of
the elongated family dining room table, where the pack council meeting had just
been held. The rest of the pack had been dismissed but not me. No, I had to
endure lecture time after a meeting so long, I’d fallen asleep and woken up
twice and still had to suffer at least three hours more.

I looked down at my phone again but
nothing had changed, everyone still had the same Facebook status since the last
time I checked 5 seconds ago. Typical. Everyone would be boring when I was
being tortured. I hoped this lecture would end soon so I could leave.

I texted Logan, who’d I seen not a few minutes
before. “
GET
ME OUT OF HERE
AND
BRING ALCOHOL.”

He replied, “Hell, no. I just got out
of there alive, every werewolf for himself. On another note, alcohol is aplenty
at home and there are many parties to hit tonight.” I smirked and looked up
again.

My father’s sharp gray eyes and taught
features made him look angry but no more than he usually did when I was
present. “Jay, it seems we’ve returned to where we always are. I don’t have
time for this ridiculous discussion, I have things to do.”

“JAMES” His voice barreled towards me,
thundering throughout the vast room. “SIT DOWN.”

I sat without any conscious thought. It
wasn’t his Alpha order voice. I could at least try to fight that because I was an
Alpha too. No, this was his angry father voice. It got to me when nothing else
did.

I muttered under my breath, “I’m
touched by your estimation of me.”

He growled. I shut up.

“James, you are the Alpha in long line
of Alpha Werewolves. You will take responsibility and you will straighten up or
I will kick you out of this pack. I will disown you and you will be forced to
live alone. This is no idle threat.”

I swallowed hard. Lone wolves didn’t make it
very far. Fact is that most lasted 6 months or less. It’s unnatural not to have
a pack and it’s driven many Werewolves insane. I wanted out of here but not
that way.

He continued. “I have given you ample
time. You are 24 years old.”

I nodded, saying the only thing I could
“Understood.”

“In the coming months you will need to
formally announce your chosen council and within the next year you will take on
more and more responsibilities. Even then you must prove yourself worthy. I
will not jeopardize this pack for anyone. You will be at every meeting and you
will give valuable input. Since you choose to act like a child, I will treat
you like one and confiscate your phone till the meetings have ended.”

That was freaking degrading and it
burned. I ground my teeth together as I said, “Fine.”

He looked up and shuffled some papers
out in front of him. Satisfied he could get under my skin once again he said
“Very well, that’s all. You are dismissed.”

I made every effort to slow my
movements otherwise I’d be running out the door. Once I made it there, I turned
and took one last look at the dining room. Brilliant chandeliers dangled from
the ceiling and priceless artworks hung on the walls. The large, mahogany table
extended in such a way as to accommodate 20 people. I saw my father, sitting at
the far end of it, his eyes straight ahead, clouded in thought.

I left the house and made a beeline for
my own down the street. I’d pondered the ‘stealing the yacht’ comment and
decided to tuck it away for a time when he wasn’t so angry. Buying one would be
easy enough but where was the fun in that?

It was Saturday night and I was more
than a little relieved to hear the music blasting from down the street. It
meant I’d finally found the house party. It occurred to me that in the
Everglades
, in the middle of nowhere, while you
might have to drive for a long time if you ran out of ice, you never had to worry
about a neighbor with a noise complaint.

I parked the car next to a few others
on the open lot and headed toward the front door. I passed through the
threshold and found the place packed with people, lights, and alcohol. This was
more than just a house party. It was a new beginning.

I started to text Christina in order to
meet up with her when I walked right into something. I heard a startled grunt
as that something, obviously someone, grabbed me by the arms and pulled me away
from his chest. I looked up to a chiseled face and a pair of brown eyes. “Oh
sorry about that, I didn’t see you there,” I confessed.

He smiled down at me, a perfect smile
with shining movie star teeth “no problem.”

I smiled back. “I’m Kira, nice to meet
you.” I backed out of his grasp on my arms to extend my hand.

He took it, held it tightly, and inched
closer to me. “Daniel.” He continued to stare at me.
Awkward
much?

I blurted out anything I could to make
conversation.
“So Daniel, enjoying the party?”

I managed to pull my hand from his and
he answered “Yep.” Well, then.

I could practically feel him breathing
on me, he was that close. I tried to make an exit “Great, well I’ll see you
around then.”

He stood there for what seemed like an
eternity before walking toward the door and saying “bet on it”. Well that was
interesting, I thought to myself.

Partly flattered and slightly confused, I
walked to an empty corner of the room before I turned back to my phone to continue
the text. Christina told me to go straight through the house and to the right,
where there would be a den. I pushed past the crowd and was relieved to see
Christina right away. She was a cousin of my next door neighbors when I lived
in
Boston
and as of a few days ago, she was my
new roommate.

We’d met a few times over the years
when she’d come up to visit family and we’d gotten along really well. She lived
in this small town called Brisdale and it was smack dab in the middle of sunny
Florida
. Whenever she’d talk about it, she’d
tell me how everybody knew everybody and that most people always stayed there,
even for college.
Brisdale
University
was a great school and it was where I
would be starting in the fall.

As a girl who’d been home schooled most of her
life, it seemed like a dream to be surrounded by a community, to have friends,
to never be alone. It was hard to believe that I was here now, starting the
life I always dreamed of and living with Christina in our very own apartment.

She was giggling and leaning on the pool table
next to who I guessed was the newest guy she’s been seeing. She spotted me and
ran over. “Kira.” she squeaked “You made it. Isn’t this place totally amazing?
We should so get a house next year.”

I glanced around the room that was
floor to ceiling green, with a green and brown pool table and light up beer
signs everywhere. “Amazing is a word.” Well, it
was
a word, just not one
that described the room.

“Oh you crack me up. Obviously we would
be better decorators.” She hiccupped, giggled. “Oops, two games of beer pong
and I’m already hiccupping.”

I laughed along with her “Yeah but did
you win?”

“Oh sure, especially with Xander as my
partner, we’re pretty much unbeatable, so we switched to pool to give everyone
else a chance.”

She pointed dramatically to the guy she
left by the table, her gold bangle bracelets shaking with the effort and
shimmering in the lights. “Xander is the blond, I really like him. I’m glad you
finally get to meet him.” She turned so she could check him as we talked. At
this angle we saw his profile. Xander was holding his cue stick in one hand and
running the other through his smooth golden hair repeatedly. It seemed obvious
that he was posing for us, so we took a good look.

“Come on, let me introduce you”
Christina grabbed my arm and led me over to the table. “Xander, this is my
roommate and good friend Kira, Kira this is Xander.”

Xander smiled briefly but his eyes kept
sliding to Chris when he said “Hey Kira, you want to join us for some pool?”

I started to answer “sounds good” when
Christina shouted “oh no, no, no. It is my duty to make sure she gets a drink
first. It’s official roommate to the new girl” another hiccup “law.”

I eyed the beer left swishing around in
her red plastic cup and nodded. We would be here for another few hours so I
could have one and be ok. “Sure, why not?”

“Good I need a refill anyways. There
are a few kegs in the kitchen.”

I started to walk out in the direction
I hoped would lead to the kitchen as I heard Xander call out “I’ll just reset
the table while you’re gone so we can play when we got back.” Christina made a
dismissive gesture but once she was turned away from him I saw a secret smile
playing on her lips. Christina just started seeing Xander but as far I could
tell she was falling for him, hard.

We made it to the kitchen and headed
toward a keg. The music was on full blast in here because the sliding glass
door opened into the backyard and the band playing there. Christina handed me
her cup, grabbed a cup for me and started pumping. She looked around as she did
so and screamed to be heard over the music. “Oh perfect, just who I wanted you
to meet. See those guys over there?”

I glanced briefly, trying to be
conspicuous and noticed three guys standing by the counter. Luckily someone
shut the glass door so I didn’t have to yell.
“Yeah, what
about them?”