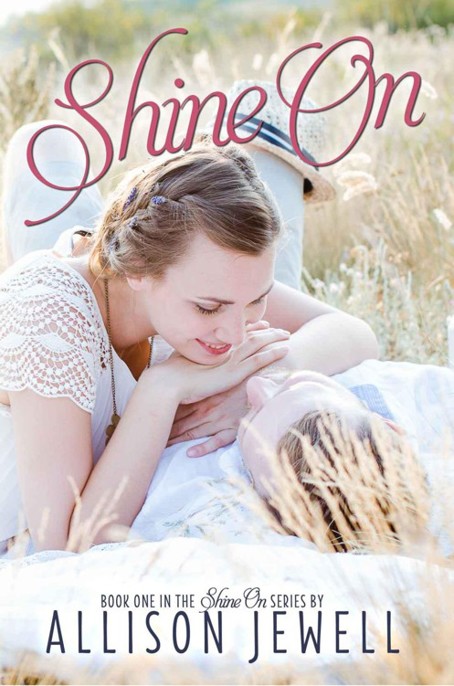 For my great-grandmother, Ina Mae, who teaches me about life, love, and laughter.

I could not have created this book without the help of several people. Thank you to Daniel, my live in historian, for helping me research the prohibition era and all things moonshine; Karen Lawson, my amazing editor; Letitia Hasser, my wonderful cover artist; to Morgan Conwell, for creating the lovely artwork that first brought my characters to life; to the members of my writing group for sharing your wealth of knowledge; to Tracey, who never hesitates to talk to me about fictional characters as if they are real people; to fellow author Laramie Briscoe for coffee, feedback, confidence, and friendship, and to my family for supporting me in the writing and publishing of this book. Last but not least, thank you to my two sweet boys, Elijah and Jonah, who inspire me daily.

M
r. Thomas’s shadow covered the thin ribbon of light shining through the window. Emmie didn’t have to look up from her embroidery to know he was staring down at her. She could feel him. He sat slowly on the faded blue sofa, scooting a little closer than was appropriate for a boss to sit next to his worker. But who was she kidding? A blind man could see he wanted to be more than her boss.

The wages she made sewing at the general store each afternoon gave her almost enough money to pay the mortgage on the little farmhouse Ronnie and Ma had left her after they passed. She needed to find another job to help make the difference for next month, maybe some cash for tuition, too. A few years back, the town’s college had opened the Normal School for Teachers. Her mama had planted that seed in her head. It was the dream she wasn’t ready to lay to rest yet.

“Mr. Thomas,” he chastised her, his voice smooth and cold, “I told you, please, call me Paul.”

“I’m sorry, Mr. Thom… I mean Paul. It’s just that everyone else—” she started.

He bent down so he was eye level. “Emma, darling, you know you’re not like everyone else.”

She sucked in her breath. “Mr. Thomas, I…” she shook her head anxiously, unsure what to say.

“I promised your brother I would watch the store while he was having lunch.” She stepped around him.

She was sure he would follow her but at least in the store he would have no excuse to be so close. Making her way to the counter she glanced around the shop. She saw a tall redhead near the back looking at some canned goods. Emmie leaned in for a closer look. It was her.

“Ava. You’re back.” She hadn’t seen her best friend in months.

“Emmie, it’s so good to see you. I just went by your house. I’m so sorry I wasn’t here when you needed me. By the time I heard Ronnie had passed away, we were already heading back. You’ve been through hell,” Ava whispered wrapping her friend in a hug.

Emmie felt a prick of pain in her throat at the mention of her stepfather’s death but she couldn’t give into the tears now, so she smiled instead.

“What’s that in your hand?” Ava frowned pointing to Emmie.

“I see that. Why do you have a baby’s dress in your hand? Is there something you need to tell me?” Ava grinned at her joke.

“You know he’s carrying a torch for you.” Ava grimaced, “He could be your papa.”

“Actually, more like an older brother… a much older brother. And I can’t think about the torch he may or may not carry for me. I needed a job and he pays me well,” Emmie said lifting her chin.

“Well, at least you’re not having his baby.” She pointed at the dress again. “That’s probably why he makes you sew those things. The old coot’s crazy, you know.” She arched an eyebrow then continued. “Ma sent me for some things. She’s dying to see you too. Can you come for dinner tonight?” Ava asked.

“Time is money, girls. Time is money.” Mr. Thomas walked up putting his hand on her elbow.

“Emma, let me take care of Miss DeCarmilla. I don’t want to keep you from finishing that beautiful dress.” Ava gave him a look that said she didn’t give a rat’s behind about the dress or his opinion of time and money. But Emmie was thankful that her friend kept all snarky comments to herself.

Emmie stepped away from his grip, “I’ll come over tonight after I get off work, okay?”

Ava pursed her perfectly glossed lips and crossed her long arms over her body. She patted her red pin curls, turned her attention to Mr. Thomas and gave him a wide smile. She sent him on a wild goose chase for supplies. Emmie did her best to focus on the smocking at hand but struggled not to watch the show in front of her. Mr. Thomas huffed as he retrieved the fourth item from the back room.

“Will there be anything else, Miss DeCarmilla?” he asked condescendingly.

“That’s all,” she answered sweetly. Then she moved to the counter to pay for her goods.

Time ticked slowly that afternoon. Emmie headed out the door as soon as the clock struck four. She uttered a quiet goodbye to Mr. Thomas, keeping her voice at a whisper. He sometimes liked to find reasons for her to work late and she didn’t want to give him the opportunity make up some excuse for her to stay.

The DeCarmilla estate was grand. The house was white brick and decorated with rows of perfectly aligned windows. Two enormous pillars extended all the way up the three-story home and provided support for the large front porch covering. The huge carport on the side always held at least a couple of cars, thanks to Ava’s older brother or friends visiting from Chicago. It was one of those houses that called the front porch a terrace. Gorgeous. Elaborate. Expensive. But Ava’s folks weren’t those kind of people. They were good to everyone. You’d be just as likely to see her ma, Molly, out in the flowerbed pulling weeds, as you would have one of their workers.

That was how Ava and Emmie got to be such good friends. Ruby, Emmie’s ma, was a pretty good seamstress. One day when Emmie was about three, she tagged along with her ma on a trip. She had joined Ava playing on the tree swing in the back yard. The two were pretty much inseparable ever since. Except for the DeCarmilla family trips to Chicago, their hometown, the girls were almost always together. Molly invited Emmie to visit Chicago with them this summer. Emmie had never been north of Louisville. She wanted to jump at the chance to go but didn’t feel like she could leave Ronnie alone. He was drinking more and more. Emmie wasn’t sure he would be able to get along without her. So, she turned the opportunity down. Then Ronnie had up and died less than two weeks after they left.

“Emmie girl, it is so good to see you again,” Molly called from the front door. Emmie closed the space between them in a few steps. Molly wrapped her arms around her in a tight hug and whispered, “I’m so sorry you’ve been going through all this child.”

It was not until that moment Emmie realized how lonely the past two months had been. Sure, she went to work. She had dinner a few times with her neighbors, Mae, Walter, and their young grandson, Max. But she was just going through the motions. Breathing in and out. Living each day as it came.

“Why didn’t you call us?” Molly’s big green eyes bore into hers. Her fiery red hair looked like flames, falling in curls around her face.

Emmie felt two strong arms pull her from Molly’s embrace. Ava’s papa, Al, always gave her the same greeting, a quick squeeze of a hug and a kiss on each cheek. “Good to see you, girl.”

“Dinner won’t be ready for another hour or so, Emmie. Ava thought you might like to relax out back, by the pool. She is upstairs changing.” Molly led Emmie inside.

It felt like it had been ages since she had been in this house. There was so much change in the short time that had passed. Emmie stopped dead in her tracks at the sight of Ava.

“Good Lord, Ava DeCarmilla, what are you wearing?” Emmie snorted. “Your papa will kill you if he sees you walking around in that!”

Ava gave a slow spin in her new swimsuit. It was black and fit tightly against her body. It came a good seven inches up from her knee. A long drape of sheer fabric hung off one shoulder like a Roman goddess. White swim shoes laced up her legs like ballet slippers. They were striking against her dark charcoal stockings.

“Papa doesn’t much care what I wear. It was Gabe that nearly died the first time I wore it on his boat this summer,” she answered with a laugh.

“Gabe? So you and Gabe… you’re a couple again?” Emmie frowned. Ava looked away sheepishly. She was avoiding this conversation. So, it must be serious.

Gabriel del Grande’s family lived in Chicago most of the time. They teetered back and forth just like the DeCarmillas. Gabe’s dad had a house just down the road from Ava’s. For the last several years Gabe was the only del Grande in town. For a long time Emmie assumed Gabe’s ma had passed away, but then one day he mentioned something about sending her a card for her birthday. She knew better than to ask him about it. Everybody’s family had their own problems.

Gabe and Ava had been nearly inseparable for months last year. Then one day last spring he just up and moved back to Chicago. No word that he was leaving or why he was going. He phoned once to give some half-thought-out excuse about needing to be near his family but she didn’t hear from him again after that. Ava was broken-hearted—cursed him, and swore him off forever.

Ava glanced down at her shoes and flipped with the ribbons that tied at her knees. “Well, you know. I mean… yeah… I guess we are… back together.”

Emmie sighed and rolled her eyes, walking past her friend. Apparently, swearing someone off forever only lasted a few weeks now. Sometimes, Ava’s drama wore her out.

War of the Whales by Joshua Horwitz
Capitol Threat by William Bernhardt
Beautiful Lies by Clare Clark
Mist & Whispers by C.M. Lucas
Powder Monkey by Paul Dowswell
The Essential James Beard Cookbook by James Beard
The Best of Lucy Felthouse by Lucy Felthouse
Pretending She's His: A Hard Feelings Novella by Kelsie Leverich
The Callisto Gambit by Felix R. Savage
Way Out of Control by Caldwell, Tatiana
Our partner