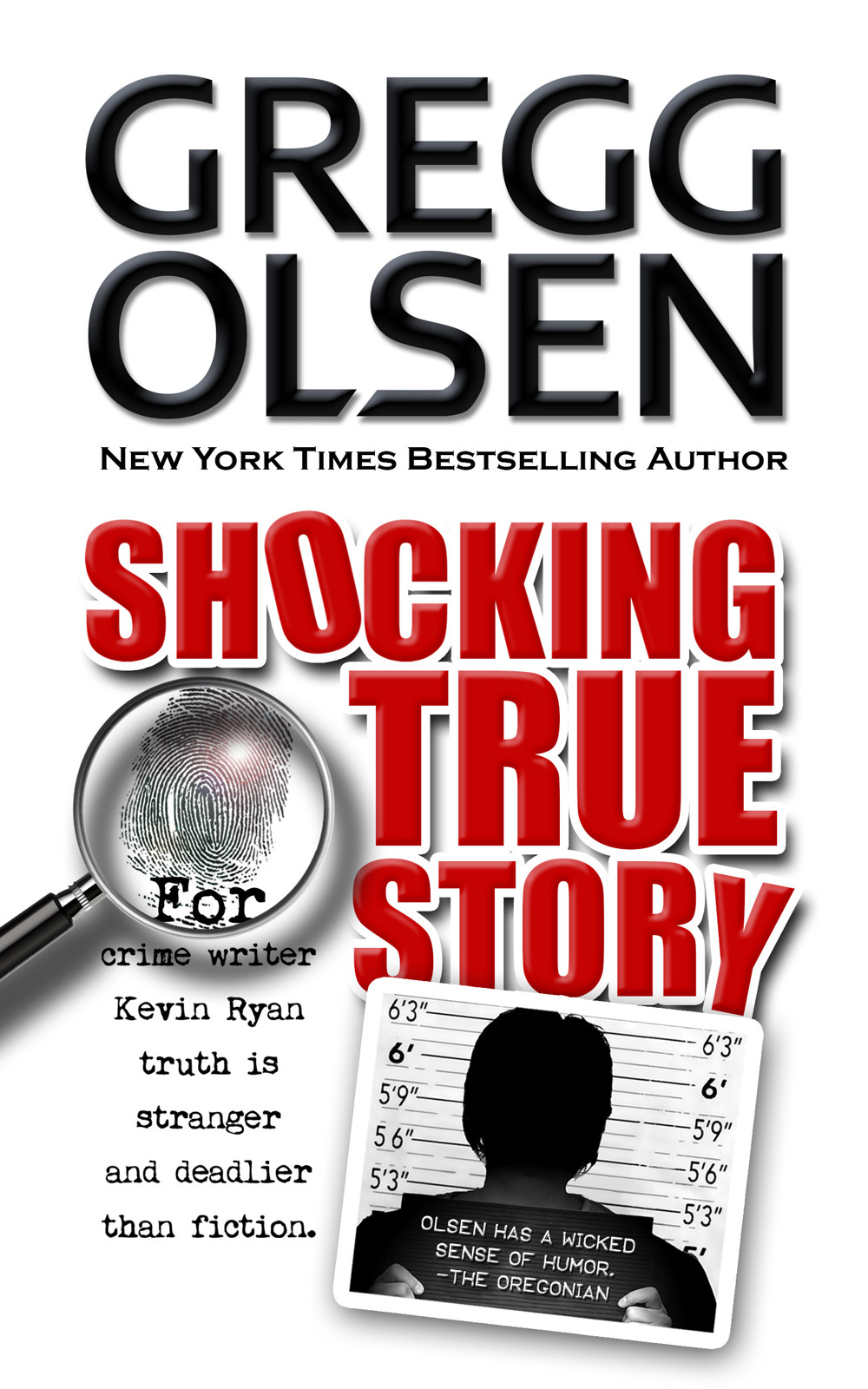 BOOK I - Murder Most Personal

BOOK II - The Finger of Guilt

BOOK IDEAS ARE BORN IN ANY NUMBER OF WAYS. Some come to authors in a burst of happenstance and, even, brilliance. Some come in the throes of a good dream. A few, I'm told, come from God. I have never been so lucky. My books have always been born of the truth. The one you are holding is one of those. I am a writer of true crime, a much-maligned genre, but one in which I felt I could stake a claim for a respectable career. It seemed that there were a million stories out there that—given some shaping and research—might make for interesting reading. The ideas come from television, prisoners who write to me, fans that show up at book signings (though I can't say I have enough of those to provide much of a stockpile) and, of course, newspapers and the internet.

Shocking True Story
is different. This is a story hatched from my own experiences; my own life.

About a year ago my wife, Valerie, retrieved a carton under our bed amid rolls of Christmas wrapping paper and white and brown tufts of dog hair. She set the legal-size box with its ill-fitting, strapped-down lid next to the computer where I did most of my writing. She smiled reluctantly and said only three words.

I understood what she meant. I knew it even if she had said nothing. I had tried to avoid the idea of telling the story contained in the beat-up box. I had resisted it for all the right reasons, though deep down I knew it was beyond my ability to do so. Beyond my need. Beyond the necessity of supporting my family.

I had a dozen such boxes in various spots in my house. In the garage, too. Three that had been stacked and draped with a cheery chintz fabric passed as a bedside table in the guest room. Those contained Renata's story, one about a woman who had killed her husband for insurance money. They held her entire life in three boxes, including her video-store card, her purse (a blue and white nautical shoulder bag) and love letters to the man with whom she had conspired to commit the murder. I even had the convicted woman's Costco shopping lists (she loved salsa and chips) and a brush embedded with her Clairol Frivolous Fawn-dyed hair.

Each was a Pandora's Box of sorts, a repository in which I was the keeper, the curator of little murder boxes which held the remnants of the books I had written. Inside each were the unspeakable and the unbelievable. I had been writing true crime books for nearly a decade and the memorabilia I had collected was suitable for a murder museum, if such a place existed. I had Christmas cards from Pamela Smart; a signed page of sheet music from Charles Manson. I even had a sketch by John Wayne Gacy (he was a better killer than artist, for sure). Inside each box of source material were numerous memories. All had been tagged with the name of the book that I had regarded as a potential bestseller.

The carton my wife put near my desk was labeled with the name of a story I started to write, but was never destined to complete:
Love You to Death
.

I took an X-acto knife from Val's art bin and sliced the silver duct tape I had used to seal the box. Even the tape rekindled a recollection of a terrible night not so long ago. The glint of silver. The flash of steel. A kind of coldness and fear I had never known before seized me once more. Some things, I know all too well, are too powerful to forget.

I pushed the lid aside and drank some coffee before looking inside. The contents were remarkable, not only in their diversity, but in their very familiarity. The top was blanketed by a green leotard, a Halloween costume worn by one of my twin daughters. A small but unmistakable crescent of blood had stained the garment's neckline.

I drank more coffee and pushed the green fabric aside. At first, I used a pencil to do so. Almost instantly, I felt clinical and foolish. Embarrassed. I was the little girl's father. Her blood was mine. I had carried her and her twin from the delivery room like two peachy footballs, one in each arm. I was the Daddy who saved her spit-up cloth because I knew that the smell would always remind me of my baby.

I gently folded the leotard and peered deeper into the box. The contents had come so close to being the province of someone else's collection; some other writer who made his or her living from the anguish of others. It had been too damn close. The interview tapes, the photos of the hard-bitten players in a ridiculous drama, a photocopy of a lineup of fingerprints that resembled a black and white rendering of five small beehives. Everything was in there. Everything that had nearly cost me all I held precious in my life—the lives of every member of my family, my freedom.

And so I agreed with Valerie. It
was
time. I fiddled with the yarn-covered pencil holder that little Teddy Bundy had made for his mom for Mother's Day in 1964 (I purchased it along with other personal belongings from the Bundy family's garage sale in 1989, after Ted was electrocuted in Florida for the murder of a schoolgirl). I had re-glued the uncoiling rainbow yarn twice before, as if keeping it intact somehow mattered.

I have always been fascinated by crime. I have always wondered what brings a child like Teddy Bundy to seek the dark side of murder. How a child, born seemingly perfect, is transformed into the embodiment of evil. Before the events took place in the book you are now holding, I pondered the
why
of a crime from a distance. A safe distance.

I'll never forget that summer day when the wheels of homicide had been set in motion, when my own story would eclipse the crime I was chronicling.

This is my story.

In Memory of June Rose Parker

Gina, Carlton and Cecile
—
The Ryans’ “up the hill” neighbors

"Kevin, you even thought that serial killer from Lincoln City was nice.
Serial killers are always nice until they get what they want."

I GAVE MY SLIGHTLY BALDING head a repeated shake. A good one. Back and forth like the last A-Rod bobble-head—before Madonna, before performance-enhancing drugs ruined his run at the all-time home run record—at a sports memorabilia fair.
Again
. I thought I'd be able to reconnect the synapses in my brain that I was sure were misfiring. I just didn't get it. I looked at the words printed out in pristine neatness by my laser printer. They were printed in Times New Roman, a crisp typeface known for starchy little serifs that saluted each word with definite preciseness. And the
sequence
of those words—they were arranged in an order of drama and truth.

What was going on here?

I considered the proposed book once more while the voice on the phone rambled on.

It was the tale of Amanda Winfield, a woman of murderous charms. The setting was good—a small town in the fir-blanketed foothills of the Cascade Mountains east of Seattle. The lead characters were benign on the surface—Amanda was a part-time kindergarten teacher; her lover, a laid-off newspaper reporter in charge of the
Family Life
section (since lost to budget cuts) at a mid-size suburban daily. The crime—unbelievable. With promises of sex, insurance money and more sex, beguiling Amanda convinced her not-so-secret reporter lover, at loose ends after the loss of his job, to kill two of her husbands, six years apart.
Two
. Not one, but
two
.

I thought it had all the elements of a true crime opus, a runaway best-seller.

I, it now seemed, was alone in that regard.

The editor's words over the phone continued to stupefy.

"If only she killed with a little more originality, more over-the-top."

The very idea hit me like a Frisbee in the back of the head.
Come again?
What was this guy saying?
I stared once more at my opening chapter, the teaser to my proposed book. What kind of meaning was I supposed to find in his suggestion that murderess Amanda Winfield might have been a better book subject if she had offed her old man with a bow and arrow or maybe sliced his jugular with the crinkly metal edge of a tuna can lid? The fact was in the days of maybe-baby killers from Florida, the infectious outrage of Nancy Grace and other headline-chasing cable wonks, the Investigation: Discovery network, and
CSI
-inspired TV shows, truth was no longer interesting.

Enigma by Michael P. Kube-McDowell
Strike a Match (Book 1): Serious Crimes by Tayell, Frank
Already Dead: A California Gothic by Denis Johnson
Nowhere to Turn by Lynette Eason
All That Lives by Melissa Sanders-Self
Scent of a Witch by Bri Clark
Gift From The Stars by Gunn, James
Colorless Tsukuru Tazaki and his Years of Pilgrimage by Haruki Murakami
Amelia by Siobhán Parkinson
The Ladies' Lending Library by Janice Kulyk Keefer
Our partner