Read Shoot Him if He Runs Online

Shoot Him if He Runs 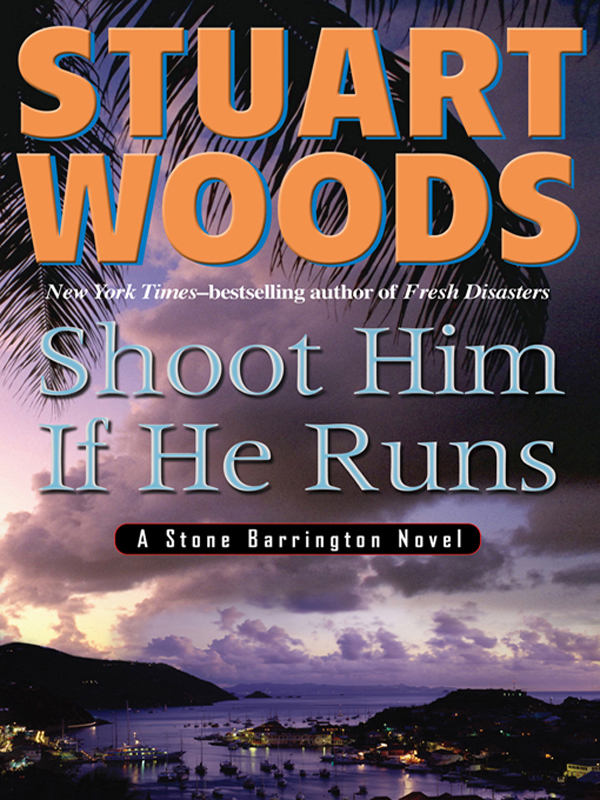 SHOOT HIM IF HE RUNS

SHOOT HIM IF HE RUNS

Copyright © 2007 by Stuart Woods
All rights reserved. No part of this book may be reproduced, scanned, or distributed in any printed or electronic form without permission. Please do not participate in or encourage piracy of copyrighted materials in violation of the author’s rights. Purchase only authorized editions.
Published simultaneously in Canada

This book is for Barbara Ellen.

Take my razor and my gun;

Gonna cut him if he stands still

Shoot him if he runs.

“Where the hell have you been?” Dino asked.

“I don’t remember anything anymore,” Dino said. “That’s Genevieve’s job, now.” Genevieve James was his new girlfriend, his first regular since his divorce. “What were you doing in Spokane?”

“I’m having the engine ripped off my airplane and replaced with a turbine—that’s a jet engine, turning a propeller.”

A waiter set a Knob Creek on the rocks before him, and he sipped it gratefully.

“But why are you late? Dinner was two hours ago.”

“Because my flight was late.”

“You don’t take the airlines; you have an airplane.”

“Dino, having sex again is addling your brain. I left the airplane in Spokane; the work takes three months. It’s a big job.”

Stone put several letters on the table and began opening them.

“You getting your mail here now?”

“No, I stopped to drop off my bag, and I just grabbed the mail on the way out the door.”

Elaine came over, allowed him to kiss her and sat down. “You getting your mail here? We charge extra for that.”

Stone put down the mail. “No, I brought it with me. Any charge for opening it here?”

“Don’t make a habit of it,” she replied. “People will think you’re living in my back room.”

“That won’t stop them from thinking it.”

“Your logic is unassailable,” Stone said, shoving the mail aside and sipping his drink.

A waiter appeared with a menu.

“You look hungry,” Elaine said. “You’re late, too; where you been?”

“Spokane, Washington; Dino will explain it to you.”

“He’s turning his airplane into a jet,” Dino said.

“Sort of,” Stone replied. “A jet with a propeller. It’s called a turboprop.”

“Why are you doing this to your airplane?”

Elaine had never evinced the slightest interest in his airplane, Stone remembered. He waited for the next, inevitable question.

“Only one engine?” Elaine asked.

“Extremely unlikely, but I’d find a place to land it.”

“Where is Genevieve?” Stone asked Dino.

“Good idea.” Eliza Larkin was an ER doctor Stone had been seeing occasionally since he had been run down by a car and she had treated him.

The two women, on cue, breezed into the place, exchanged kisses with everybody and sat down.

“Bring ’em a menu,” Elaine said to a waiter.

“No, thanks, I had dinner in the cafeteria earlier,” Eliza said.

“Me too,” Genevieve said.

Elaine looked at them incredulously. “You ate food from a hospital cafeteria instead of here?”

“I would have fainted if I hadn’t,” Eliza said. “Maybe I’ll have dessert.”

“Dessert is good,” Elaine said, pointing at a tray of samples and motioning for a waiter to bring it over.

The two women excused themselves and went to the ladies’ room.

Stone turned his attention to the mail again, and a large white envelope caught his attention. He turned it over to read the return address. The White House, Washington, D.C., it read.

“I’ve been invited to dinner at the White House,” Stone said, gulping. “Holly Barker and me.”

“On the same invitation?” Elaine asked, taking it from him.

“Why you and Holly?” Dino asked.

“Yeah, Eliza is gonna want to know the answer to that question, too,” Elaine said.

Stone took the invitation and stuffed it into his pocket. “Let’s not discuss it with her,” he said, “especially since I don’t know the answer to that question.”

His cellphone vibrated on his belt, and he flipped it open. “Hello?”

“It’s Holly.” Holly Barker was his friend and sometime lover, a retired army officer and chief of police in a Florida town, now doing something or other for the CIA.

“Speak of the devil.”

“Fine. How did you know I was in Spokane?”

“I have a computer program that tracks the flight of any airplane. You went yesterday; I figured you came back today. You’re doing the engine conversion?”