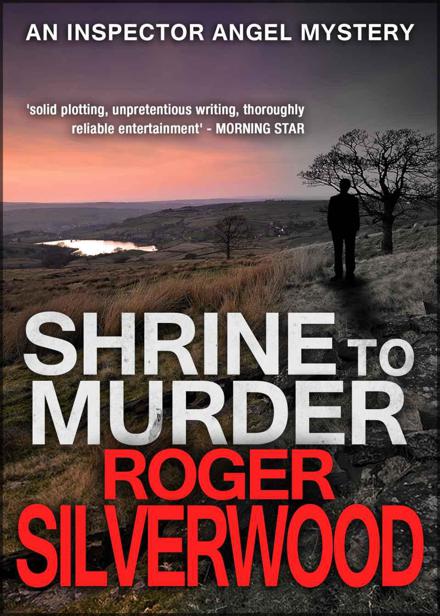 Detective Inspector Michael Angel and his team of regulars are searching for a serial killer on the loose in the Yorkshire town of Bromersley. The available clues are as sparse as they are puzzling: a character in early Roman attire is observed at every murder and a laurel leaf is left on every corpse. DNA evidence links a woman of oriental origin to the murders. but this profile doesn't fit any of the suspects. The investigations become more mystifying as Inspector Angel races against the clock to find the killer. Can he prevent further bloodshed?

Roger Silverwood has asserted his rights under the Copyright, Design and Patents Act, 1988, to be identified as the author of this work.

This edition published in 2014 by Endeavour Press Ltd.

Extract from
Night and Silence
by Aline Templeton

The
sky was as black as fingerprint ink.

A
man in white placed a ladder under the window of a bedroom on the first floor of the detached house. He looked round then climbed rapidly up it. A few moments later he opened the window to its fullest extent and climbed inside.

The
only sound to be heard was the heavy, even breathing from a big man in a large bed. The intruder could just make out the outline of the sleeping figure, on his back with his head on the pillow and covered with blankets up to his chest.

The
man approached the bedside.

The
intruder saw the man’s eyes reflect what little light there was. He rushed forward and put a hand across the man’s mouth.

The
man in the bed saw the glint of a shiny dagger blade in the intruder’s other hand. His eyes shone like a frightened cat in headlights. His pupils travelled from right to left and then back again.

‘
Listen to me, Redman,’ the man in white said. ‘You’ve done very well for yourself these past twenty years. Made yourself a nice little packet. This place here and your villa in Spain. Two sons both doing well. Both married. Given you three healthy grandchildren.’

Redman
’s arms came out of the bedclothes and grabbed hold of the intruder’s wrist.

‘
No you don’t.
It
’
s
payback
time
,
now
,’ the intruder said, then he brought the dagger down and stabbed Redman in the chest.

The
old man cried out. His heart exploded. Hot blood spurted out over his neck and chest. His eyes centred on the ceiling and stayed there for two seconds; then his eyes closed and his limbs loosened for the last time.

The
intruder looked down at the bed, his eyes glowing like cinders. A volcano raged in his chest. His breathing was noisy, his head as light as a champagne bubble. He stared down at the body and smiled. After a few moments, he withdrew the dagger and wiped it on the bedclothes.

It
was Police Constable Ahmed Ahaz.

‘
Any signs of that new sergeant?’

A
new sergeant was due. The appointment had been made to replace the irreplaceable Ron Gawber, the much missed man who had been Angel’s sergeant for ten years and had recently left Bromersley force for a position in Lyme Bay. The move had come about because his wife wanted to be near her father since her mother had died of cancer just before the previous Christmas. Their two sons had both left home to attend further education. There was a vacancy in the local police force down there so Ron Gawber applied for the post and had got it.

Angel
wasn’t at all pleased, but he knew Gawber’s wife was as masterful as his own wife, Mary. But in his case, he was absolutely certain in his own mind that he wouldn’t move away from Bromersley until he was retiring age, whatever scheme Mary concocted.

Anyway,
Ron Gawber’s replacement was due that morning.

‘
His name is Carter,’ Angel said. ‘Show him in as soon as he arrives.’

Angel
reached for the mornings post still untouched on his desk.

He
looked at it and frowned then snatched it up. It was a young constable on reception. ‘There’s DS Carter arrived here, sir. Asking for you.’

Angel
looked at his watch. ‘About time. Have somebody show the new DS to my office, lad. And make it quick.’

He
replaced the phone.

He
stood up, turned round and looked in the mirror. He adjusted his tie. Then ran a hand over his hair. It wasn’t necessary, but he wanted to look his best. He expected his plainclothes staff always to look smart even though they were not in a formal uniform. There were no jeans and T-shirts with slogans (unless the staff were under cover and it was absolutely necessary) on his team. After all, first impressions and all that. He wanted the new man to understand that he was joining a smart, hard-working, no-nonsense, tightly run investigative team dedicated to fighting crime and committed especially to solving murder cases. He had already missed the presence of Ron Gawber. Carter was going to have one hell of a job to come up to his standard of police work, comradeship and perhaps, most of all, dependability.

There
was a knock at the door.

Angel
turned to face the door.

The
door opened, a uniformed constable put his nose in and said, ‘DS Carter, sir.’

‘
There you are, Sarge,’ the constable said. Then he pushed open the office door and dashed off up the corridor.

As
the door swung open, it revealed a pretty brunette in a dark suit and white blouse.

‘
DS Carter reporting for duty, sir,’ she said sweetly with a smile.

Angel
’s jaw dropped. His face went as white as the padre’s knees.

After
a moment, Carter said, ‘May I come in, sir?’

She
closed the door and went up to his desk.

‘
I’m afraid there must be some mistake,’ he said.

Angel
wasn’t in any joking mood. His face was as hard as Dartmoor stone. ‘I was expecting a Detective Sergeant Carter.’

‘
I
am
Detective Sergeant Carter, sir,’ she said.

He
shook his head and blew out a noisy breath.

She
lifted her head and said: ‘Thirty-four per cent of all police personnel are women, sir. But I am sure you know that.’

His
eyes opened wide briefly, then he said: ‘Aye? Oh yes? Maybe, but I manage a team who catch the worst kind of criminals, sergeant: homicidal maniacs, murderers, rapists, drug runners and the very worst kind of bully boys. I need
one
hundred
per cent of my team to be strong enough and dedicated enough to get in there and tough it out, no holds barred, whenever there’s need. Don’t you see that, missy?’ then he added heavily, ‘I can’t do with a
thirty
-
four
per cent margin.’

Her
eyes flashed. ‘I can pull my weight in any situation, sir. And I would point out that my rank is Detective Sergeant. I prefer to be addressed as sergeant. Never
missy
. If you don’t mind,
sir
!’

He
crossed the office, went through the door, charged up the green-painted corridor to the top to a door marked: ‘Detective Superintendent Harker.’

He
knocked on it sharply.

‘
Come in,’ a voice called out. It was followed by a long and loud cough.

Angel
opened the door and was immediately engulfed in a cloud of menthol.

A
bald man with a head the shape of a turnip and with thick ginger eyebrows was seated behind a desk, which was heavily loaded with piles of paper and paper files. He looked up at Angel, sniffed and said, ‘What is it? I am up to my eyes, lad. I am trying to finish the first-quarters stats.’

Angel
blew out a sigh then said, ‘Carter’s arrived, sir. Ron Gawber’s replacement. It turns out
she
’
s
a
woman
.’

Harker
looked up at him. ‘Course she’s a woman. Did you think she was a man in a kilt?’

‘
Not right? You can’t forever dodge having women in your team, you know, Angel. You’re not
that
special. She comes with an excellent record.’

‘
I am short staffed enough, sir. You know I can’t send her in against some of the monsters we have to deal with.’

‘
You might find what she’s short in brawn she makes up for in brains.’

‘
I wanted a fully qualified, experienced,
male
sergeant. A man with resolve on his mind and fire in his belly. A man I could confidently send out to bring…to bring Jack the Ripper in, if necessary.’

‘
Well that’s hard luck, Angel.
I
’
d
like a couple of male
or
female accountants to sort out these figures for me, but the budget won’t stretch to it. You’ve got a perfectly competent detective sergeant, who happens to wear a different sort of underwear, smells of soap and always leaves the lavatory seat down. Those little idiosyncrasies will in no way affect her effectiveness as a police officer, so buzz off and get on with your work and let me get on with mine. There’s nothing I can do about it.’

Angel
stared at him hard, but Harker had turned back to his mound of papers.

Angel
went out of the office and stormed down the corridor.

‘
Thank you for nothing,’ he muttered.

He
clenched his teeth. His jaw muscles contorted his face.

He
arrived at his office and slammed the door. He positioned himself behind his desk. He looked at the determined face of DS Carter, rubbed his chin, picked up the phone and tapped in a number. It was soon answered.

‘
Send WPC Leisha Baverstock into my office straightaway,’ he said, then he replaced the phone then looked back across the desk at the young woman and said, ‘Well, Sergeant Carter, I appear to be…stuck with you…on a trial basis. You follow an excellent man who was with me for ten years. We’ll have to see how you measure up.’

Angel
’s eyes flashed back across the desk to meet hers. There seemed to have been a sting of sarcasm in her reply, but her face gave nothing away. He learned something about her that was unusual. She could hold a look into somebody’s eyes at least as long as he could.

‘
At least he usually was able to be on time,’ Angel said.

‘
Sorry about that, sir. I did a trial run from home yesterday and it only took twenty-two minutes.’

‘
This morning, the traffic was horrendous, sir. And there were hold-ups at every traffic light.’

There
was a knock at the door.

WPC
Leisha Baverstock came in. Up to that point, she had been regarded as the station beauty. There might be a feeling of competition now that another good-looking woman had arrived at the station.

The
two women looked at each other and exchanged smiles.

Angel
added: ‘Show her round the station. Introduce her to Inspector Asquith. Answer any questions. Make her feel…at home.’

The Butcher and the Beast by Sean Michael
Castle of the Wolf by Margaret Moore - Castle of the Wolf
Kill List (Special Ops #8) by Capri Montgomery
Blood and Ice by Leo Kessler
Chicago Assault by Randy Wayne White
Secret Lives by Diane Chamberlain
How You Touch Me by Natalie Kristen
A Simple Charity by Rosalind Lauer
Geisha (Shinobi Saga) by Batto, Sessha
At Canaan's Edge by Taylor Branch
Our partner