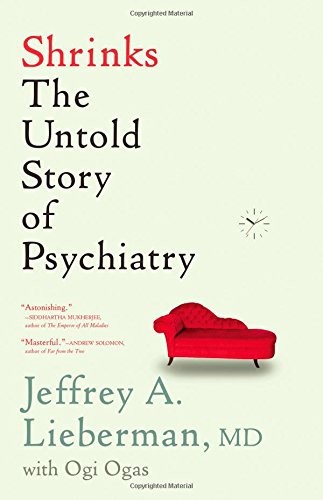 For my parents, Howard and Ruth, who inspire me; my wife, Rosemarie, and sons, Jonathan and Jeremy, who support me; and my patients, who guide me.

Disclaimer: I have changed the names and identifying details of patients in this book to protect their privacy, and in some cases I have created composites of multiple patients. Many individuals have played seminal roles in the evolution of psychiatry. In the interest of readability, I have chosen to highlight certain key figures who seemed to me representative of their generation or their specialty. This should not be construed as ignoring or diminishing the achievements of other contemporaries who are not specifically mentioned by name. Finally, bucking the usual convention among academics, I have avoided using ellipses or brackets in quotations so as not to interrupt the narrative flow of the story, but I have made sure that any extra or missing words did not change the original meaning of the speaker or writer. The sources of the quotes are all listed in the Sources and Additional Reading section, and the original versions of the quotations are available at www.jeffreyliebermanmd.com.

The Brain is wider than the Sky
,

For put them side by side

The one the other will contain

The Brain is deeper than the sea
,

For, hold them, Blue to Blue

The one the other will absorb

As Sponges, Buckets do.

The Brain is just the weight of God
,

For, Heft them, Pound for Pound

And they will differ—if they do—

As Syllable from Sound.

Anyone who goes to a psychiatrist ought to have his head examined.

A few years ago, a well-known celebrity—let’s call him Mr. Conway—reluctantly brought his twenty-two-year-old daughter to see me. Elena had taken a leave of absence from Yale, Mr. Conway explained, because of issues surrounding a mysterious drop in her grades. Mrs. Conway nodded assent and added that Elena’s slacking off stemmed from “a lack of motivation and low self-confidence.”

In response to their daughter’s perceived troubles, the Conways had hired a parade of motivational experts, life coaches, and tutors. Despite this pricey coterie of handlers, her behavior failed to improve. In fact, one tutor even volunteered (rather hesitantly, given Mr. Conway’s celebrity) that “something is wrong with Elena.” The Conways dismissed the tutor’s concern as an excuse for his own incompetence and continued to look for ways to help their daughter “snap out of her funk.”

They turned to naturopathic agents and meditation, and when those didn’t help, they shelled out more money for hypnosis and acupuncture. In fact, they had done everything possible to avoid seeing a psychiatrist until “the incident.”

While traveling uptown on the New York subway to meet her mother for lunch, Elena was accosted by a balding middle-aged man in a grimy leather jacket who coaxed her off the subway car. Without informing her mother, Elena abandoned the lunch appointment and accompanied the man to his seedy basement apartment on the Lower East Side. The man was in the kitchen preparing something alcoholic for her to drink when Elena finally answered a call from her frantic mother on her cell phone.

When Mrs. Conway learned where Elena was, she speed-dialed the police, who swooped in and carted her back to her parents. Elena didn’t protest her mother’s abrupt intervention; in fact, Elena didn’t seem fazed by the incident at all.

As the Conways narrated these events in my Manhattan office, it was apparent that they loved their daughter and were genuinely concerned for her welfare. Having two sons of my own, I could easily empathize with their distress over the possible fate that could have befallen their daughter. Despite their concern, they made plain their doubts about the need for my services. After he sat down, the first thing Mr. Conway said was, “I gotta tell you, I really don’t think she needs a shrink.”

The profession to which I have dedicated my life remains the most distrusted, feared, and denigrated of all medical specialties. There is no anti-cardiology movement calling for the elimination of heart doctors. There is no anti-oncology movement protesting cancer treatment. But there is a large and vocal anti-psychiatry movement demanding that psychiatrists be downsized, reined in, or extirpated. As chairman of the psychiatry department at Columbia University, chief psychiatrist at the New York Presbyterian Hospital–Columbia University Medical Center, and past president of the American Psychiatric Association, I receive emails each week expressing pointed criticisms like these:

“You take perfectly normal behaviors and call them illnesses to justify your existence.”

“There is no such thing as mental disorders, only diverse mentalities.”

“You quacks don’t know what the hell you’re doing. But you should know this: Your drugs destroy people’s brains.”

Such skeptics don’t look to psychiatry to help
solve
mental health problems… they claim psychiatry
is
the mental health problem. All around the world, people have an abiding suspicion of “shrinks”—the most common epithet for the self-important charlatans believed to populate my profession.

I ignored the Conways’ skepticism and began Elena’s evaluation by taking her history, soliciting biographical and medical details from her parents. Elena, I learned, was the oldest and brightest of the Conways’ four children and the one who seemed to hold the greatest potential. Everything in her life had been going great, her parents confided wistfully—until her sophomore year at Yale.

Open, gregarious, and popular during her freshman year, over a span of a few months Elena gradually stopped discussing her sorority life and romantic interests with her friends and parents. She adopted a strict vegetarian diet and became obsessed with the Kabbalah, believing its secret symbology would lead her to cosmic knowledge. Her attendance in class became erratic, and her grades dipped sharply.

At first, her parents were not worried by these changes. “You need to give kids space to find themselves,” offered Mrs. Conway. “I sure marched to my own drummer when I was her age,” agreed Mr. Conway. But Elena’s parents finally became concerned after a phone call from Yale’s student health services.

Elena had accused girls in her sorority of taunting her and stealing a gold bracelet. But when questioned by university administrators, Elena’s sorority sisters denied any bullying—and they insisted they never saw the bracelet. They
had
noticed, on the other hand, that Elena’s behavior had become increasingly strange. One of Elena’s professors had even expressed concern over Elena’s response to an exam question. When asked to explain James Joyce’s stream of consciousness technique, Elena wrote that Joyce’s literary style was “a code with a special message to selected readers with wisdom implanted in their minds by the spiritual forces of the universe.”

After that, the Conways requested a leave from school for Elena and enlisted private coaches and applied new age remedies until a friend recommended a popular Manhattan psychotherapist. This social worker was well known for promoting a decidedly nonmedical model of mental illness, pronouncing psychological issues as “mental roadblocks.” As treatment, she favored a form of confrontational talk therapy of her own invention. She diagnosed Elena as suffering from a “self-esteem disorder” and began a series of expensive twice-weekly therapy sessions to help her remove her roadblocks.

After an entire year’s worth of confrontational therapy produced no improvements, the Conways next turned to a holistic healer. He prescribed a purgative regimen, vegetarian diet, and meditative exercises, but despite his most creative efforts, Elena remained emotionally detached and mentally scattered.

Then the incident of the sleazy stranger’s aborted abduction happened, forcing the Conways to confront the disconcerting fact that their daughter seemed oblivious to the dangers of going home with lecherous strangers. At this point their exasperated family physician implored them, “For Christ’s sake, take her to a real doctor!” and they came to me.

Completing the interview with Elena’s parents, I requested the opportunity to speak with their daughter privately. They left my office, and I was alone with Elena. She was tall, slender, and pale, with long blond hair that was tangled and unwashed. Earlier, as I was speaking with her parents, she had exhibited a demeanor of nonchalant distraction, like an idle cat. Now, as I addressed her directly, her gaze shifted randomly, as if she considered the lights in the ceiling to be more interesting than her interviewer.

Rather than feeling slighted, I felt genuine concern. I was familiar with this vacant and desultory gaze, which one colleague calls “fragmented attention.” It suggested that Elena was attending to stimuli inside her mind rather than those unfolding in the room around her. Still contemplating Elena’s distracted demeanor, I asked how she was feeling. She pointed to a photo on my desk of my wife and children. “I know those people,” she replied, in a soft monotone like the whir of a ceiling fan. As I started to ask how she could know them, she interrupted. “I need to leave. I’m late for my appointment.”

I smiled encouragingly. “This is your appointment, Elena. I’m Dr. Lieberman and your parents arranged this meeting to see if there is anything I might be able to do for you.”

“Nothing’s wrong with me,” she replied in her flat, hushed voice. “I feel fine except my sisters keep making fun of me and messing with my artwork.”

As I asked her about school and why she had left, she abruptly announced that she was no longer interested in school—she was on a quest to save the world by discovering the secret source of divine power. She believed God had placed angels in her parents’ bodies to guide her on this sacred mission.

“Your secretary knows about it, too,” Elena added.

“Why do you think that?”

“The way she smiled at me when I came in. It was a sign.”

Such delusions, which psychiatrists classify as both “narcissistic” (relating incidental external events to one’s self) and “grandiose” (imbuing mundane activities with transcendent purpose), are known as Schneiderian symptoms, after the German psychiatrist Kurt Schneider, who first described them in the 1940s as characteristic symptoms of psychosis. This initial constellation of behaviors and history strongly suggested a diagnosis of schizophrenia, the most severe and perilous of mental illnesses, and the illness I have studied for three decades.

I dreaded having to inform the Conways of this news, but at the same time I was shocked and saddened that this once lively girl may have been suffering with a highly treatable illness for three years while being repeatedly exposed to a series of useless remedies. Worse, by avoiding genuine psychiatric treatment, her parents had placed her at risk to very real dangers: First, her impaired judgment could have led her to make disastrous decisions. Second, we now know that if schizophrenia is left untreated it gradually induces irreversible brain damage, like the engine of a car driven without an oil change.

Paper Roses by Amanda Cabot
Mercenary's Reward by Stephanie Snow
La sombra del águila by Arturo Pérez-Reverte
Sex in the Stacks by D. B. Shuster
The Ice Captain's Daughter by S.G. Rogers
Fat Girls and Fairy Cakes by Sue Watson
The Life of Super-Earths by Dimitar Sasselov
Any Given Doomsday by Lori Handeland
The Wish Giver by Bill Brittain
Shotgun Wedding: A Bad Boy Mafia Romance by Natasha Tanner, Ali Piedmont
Our partner