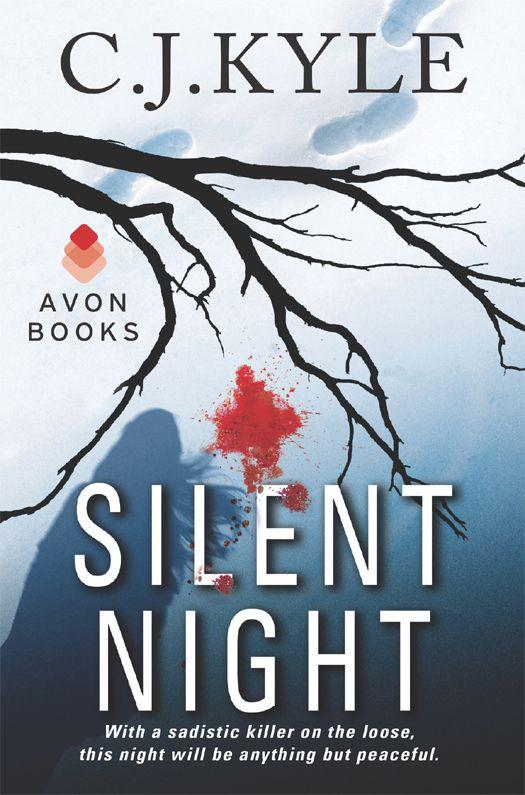 To Kyle and Carmine

T
O
J
AY
B
EELER
, for all the brainstorming help. Any mistakes are mine and do not reflect poorly on your brilliance.

To Lauren Burke, for being my beta reader and helping to keep the story moving.

To Catherine and Kym, for all your research help. Again, any mistakes are mine and do not reflect poorly on your brilliance.

To the Knoxville PD and the local detectives for answering all of my questions. Thank you for your dedication and service. And once again, any mistakes are mine and do not reflect poorly on their brilliance.

To the local priest who never ducked my calls, even when I asked the same questions more than once.

To Roberta Brown. Steadfast agent with loyalty and heart to spare.

H
E DUCKED BEHIND
the brick walls of Levi High’s gymnasium and pulled a pack of Newports from his dusty denim coat. He hated opening day festivities when tourists took over Christmas, Tennessee, like the privileged bitches they were. Family vacations? What a joke. He lit the cigarette, inhaled, and let the minty coolness coat his throat before exhaling onto the bare fingertips hanging out of his fingerless gloves.

Pressing one foot to the wall, he leaned against it and cupped the cigarette in his hand as a small family rushed past toward the parade. A mother, a father, a kid in a stroller . . . and the only perk of tourist season: a teenage daughter. She gave a slight smile as they passed him. He played it cool. Didn’t smile back. Gave her a suave nod instead.

Screw the vendors selling chestnuts. He’d rather have
that
in his mouth any day. Sweet tits. Nice little ass.

As he watched the girl disappear, he flicked his cigarette into the bushes and cleaned dirt from under his pinky with the pocketknife he’d stolen from his dad’s nightstand. What did she taste like? Shit. What did
any
girl taste like? At this rate, he was going to die a virgin. He was fifteen and hadn’t even had a girlfriend. Not unless he counted Susan Parker from fifth grade. The girls in this town were all goody two-shoes, anyway. Living in the Bible Belt sucked.

Loudspeakers crackled to life overhead and “O Little Town of Bethlehem” rang out, making him groan. He kicked off the wall, pulled his hood over his ears, and headed down Main Street. He dug an Altoid from his back pocket, popping it into his mouth in case he ran into anyone who might blab to his father and earn him another ass kicking. His ribs still hurt like hell from the shit storm his mother had caused that morning. So he’d forgotten to wash his cereal bowl. Did that mean he deserved to get the hell kicked out of him?

They were all assholes.

He passed St. Catherine’s Church and sneered at the Catholics who left Mass smiling and happy. What did they know about God? What did any of them know? The Presbyterians, the Baptists, the Catholics? They were all so fucked in the head, so damned brainwashed, it was pathetic. They didn’t even acknowledge that their beloved Christmas was actually a pagan holiday in the first place, celebrated by the very people they shunned since the beginning of time. He’d learned that in the only place that brought him any pleasure—the Christmas Public Library, where he headed now.

As he marched up the steps to the glass doors, he stopped and cursed. It was closed for festivities.

He tried the door anyway. Locked.

Leaning against the stair rail, he watched as the Ferris wheel sparked to life and the green and red Christmas lights wrapped around the lampposts on every corner flickered on. Opening night had started. In a matter of minutes, the street would be lined with people gawking over corny floats, fire trucks, and Mayor Levi dressed as Santa for the first parade of the season.

He leaped over the rail and headed to the alleyway behind the library. He’d just lit another Newport when he realized he wasn’t alone. A figure dressed in black appeared, and he tensed. It wouldn’t be the first time he’d been jumped in an alley. But as light fell over the man’s face, he exhaled and tossed his cigarette into the snow.

“What are you doing here?”

What was the guy’s name? He couldn’t remember. Didn’t care enough to ask, either.

The man pulled a pack of cigarettes from inside his coat and held them out. “Want one?”

The man sat on the back steps of the library and held a cigarette in his fingers. He never lit up, though.

“Yeah.” This lame ass better not try and sell him on the benefits of being a Catholic versus a Baptist. He was neither, and he planned to keep it that way.

How did this guy know that he’d
ever
gone to church with his family? He hadn’t been in over a year, and he was pretty sure this guy was relatively new in town.

“Fine, fine. Not here to convert you or anything. Just wanted to sneak a smoke.” The man smiled. “Go on home. I didn’t mean to keep you.”

He tried to smile back, but was pretty sure what came out was a smirk. He headed to the other side of the building, away from the man and back toward Main Street. It wasn’t until he was well past the Dumpsters that he’d realized he’d been fiddling with his pocketknife the whole time he’d talked to the guy.

“Not very Christian of you.” The voice was directly behind his ear, and as he turned, he found the man looming over him, something long and shiny in his hands.

The object was around his throat in a flash, and he was shoved to his knees before he could register the panic building in his chest.

“What the fuck . . . are you doing?” He gripped the steel band at his throat with one hand while the other fumbled in his pocket for his dad’s knife.

He could see the man’s lips moving but couldn’t hear the words through the pounding of his heart in his ears.

With shaking fingers, he managed to slip the knife open, and plunged the small blade into the prick’s thigh. The son of a bitch let out a grunt but didn’t flinch or ease the grip on the wire.

Abandoning the useless weapon, he clawed at his neck, trying desperately to get his fingers beneath the wire as it sliced into his thin skin and cut off his air. His muscles became slack. The already dim alley began to fade. No longer able to support his own weight, he fell to his side.

The hold on his neck eased and he pulled in great gulps of icy air, trying to blink through tears blinding his semiconscious state. His stomach convulsed and he spewed his dinner all over the bastard’s feet. As the man stepped back, he pulled himself up, turning and running before the man could grab him again.

He didn’t make it three feet before something cold and hard pierced his left thigh. He stumbled, made it one more step before his legs gave out. He tried to break his fall with his hands but his face smashed against the brick wall. As he landed in the dirty snow, the weight of his body drove the blade deeper into his thigh, stopped only by the blinding pain of steel ricocheting off bone.

Taking a second to search the darkness for his attacker, he grabbed the long wooden handle protruding from his thigh and tried to remove it. The pain was too intense. He was shaking too badly. He was crying like a pussy, and all he could think of was that he should have stayed home with his drunk mother.

“You fucking psycho!” Turning onto his belly, he pulled himself along the snow-covered gravel. Something pressed into his back, stopping his sorry attempt to escape. The blade was ripped from his left leg. Pain gagged him, made him scream, but his pleas were drowned out by the festive cheers and applause of the Christmas in Christmas Festival. A swoosh rang in his ears as the weapon sang through the air to slash into his right leg.

The Ferris wheel creaked nearby, fireworks popped overhead, and laughter, squeals, and distant, muffled carols played over the loudspeaker. It all provided a sickening contrast to the horrors happening behind the library. The blade sliced through his frayed jacket and splayed open the flesh beneath, carving into his back as easily as if he’d been made of butter.

He wanted to run, but his body was too racked with pain to obey. He was so scared. An added humiliation of warmth spread through the crotch of his jeans. He thought of all the gods he’d read about, prayed to each and every one of them as he gripped a loose brick, rolled, and tried to find the monster.

He should never have looked back. If he hadn’t, he might have been spared the terrifying sight of metal shoving its way between his ribs. The metal sliced through tendons and muscle before banging against bone.

“Please.” He choked as he rolled to his stomach. “Wh-what did I do?”

Hot breath fanned his ears. The stench of onions gagged him. “Thou shalt not worship false gods. You deny His graces, refusing to accept the blessings He gives you daily. It is because of Him that you have lived this long.”

Blessings? God had forgotten about him long ago. Certainly wasn’t thinking of him right now. He’d prayed for the beatings to end. Had prayed for someone to see what was happening to him and stop it. The cops had been useless. The courts too slow to do anything but piss his dad off even more. How did he make the lunatic understand? He hadn’t forsaken God. God had forsaken him!

“Your sins can no longer go unpunished.”

A cry tore from the deepest part of his soul as something sharp snatched at his neck, yanking his skull toward the heels of his boots. The loud crack of his spine breaking was followed by the peaceful numbness he’d been searching for. The tender flesh covering his trachea shredded, ripped, dripped blood onto the snow beneath him, but he no longer cared.

Yes. Embrace it. It wasn’t so bad really. No one could hurt him again. All he had to do was press his cheek to the snow and it would all be over . . .

“May God save your soul.” Hot breath cocooned his ear. “And should He find your sinning soul black, may the devil feast upon it, instead.”

Blood bubbled from his mouth as the world dimmed a little more.

He could have sworn he saw God. No. Not God. It was a girl with a long blond braid and a plethora of freckles on her nose and cheeks. Susan Parker. It felt like the last genuine smile he’d ever received from anyone had come from her. Remembering it brought him an odd cloak of comfort.

He felt himself smile as he finally remembered.

The Beach Hut by Veronica Henry
The Uncatchable Miss Faversham by Elizabeth Moss
Swing (Tidals & Anchors MC Book 1) by Olson, Yolanda
Deep Into the Abyss (Darkest Faerie Tale Series Book 2) by Riley Bancroft
Nobody's Son by Shae Connor
The Black Rose by Diana Sweeney
Bound by Rapture by D. Martin, Megan
The Sixth Lost Tale of Mercia: Hastings the Hearth Companion by Jayden Woods
Queen of This Realm by Jean Plaidy
The Door in the Mountain by Caitlin Sweet
Our partner