Read Silent Orchids (The Age of Alandria: Book One) Online

Silent Orchids (The Age of Alandria: Book One) 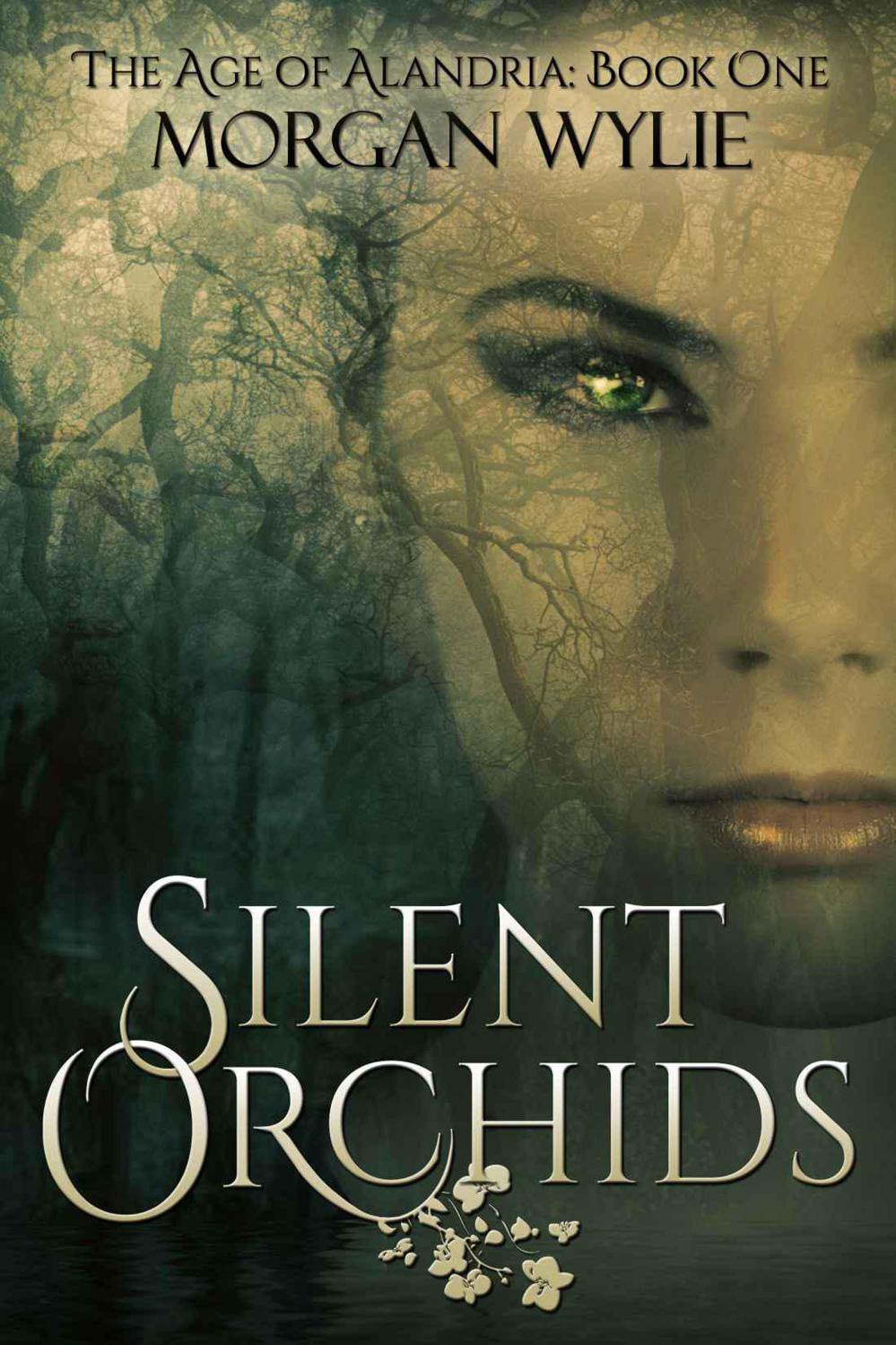 The Age of Alandria

This novel is a work of fiction. Any references to historical events; to real people, living or dead; or to real locales are intended only to give the fiction a sense of reality and authenticity. Names, characters, places, and incidents either are the product of the author's imagination or are used fictitiously, and their resemblance, if any, to real-lif counterparts is entirely coincidental.

Cover Art and Typography by Phatpuppy Art and The Bookish Brunette

For Steven, my husband and best friend, who encourages me and challenges me to pursue my dreams. I wouldn’t be who I am without you. Thank you. And of course, thank you for naming the Droch-Shúil among others.

For my daughter, who inspires me to dream daily. You make my heart happy.

First off, I would to acknowledge you, the reader. For it is with you that my story has wings. Thank You.

My husband, Steven, with out you this story wouldn’t be all that it has become. You inspire me, challenge me, and encourage me to be the best version of me I can be even when I wasn’t sure who that was. You are my hero and my partner. Thank you. And to my daughter, you are too young to understand all this now, but know that I continue pursuing my dreams so that you know you can pursue yours.

My family, you have been an incredible support and encouragement. Thank you for believing in me and cheering for me.

To my first readers, Gaby and Kallie, your critiques, insights, and encouragements have been invaluable. Thank You. You’re up next! And my mom, I can’t tell you how much it meant that you liked my story and believed in it. Xoxo

Also, my writing friends, your are my inspirations and my heroes. Thank you for your encouragement and support (I don’t know what I would have done without you!): Lizzy Ford, Julia Crane, Samantha Young, Quinn Loftis, and many others! To my beta readers, You ROCK! Thank you for your thoughts, opinions, and excitement.

Kelly at InkSlinger PR, thank you for believing in my story enough to help the people find it. You’re a ROCK STAR!

Shout out to my creative team on this project: Claudia at
PhatpuppyArt
for her creative genius with the cover art, and Ashley at
The Bookish Brunette
for her beautiful fonts and layout. You are the genius behind the face of this book.Thank you both!

Also, to
Eden Crane Design
for all her work creating symbols to define each race (and for putting up with the ‘crazy symbol lady’ ;), and
Donna Dull
who brought Alandria to life visually with an original map.

And to my editor,
Christine LePorte
, thank you for catching all my mistakes and making my words flow. You were fantastic to work with, thank you!

And to The Bean coffee bistro in Franklin, TN—my home away from home—thank you allowing me to stay longer than should be allowed ;)

Also a special Thank You to
Steven James Wylie
and Blair Masters for your beautiful original soundtrack Silent Orchids inspired by this book.

A Brief History of
Alandria

Alandria—a realm of Elves, Faeries, and Shifters—was once a land of great beauty and magic. A place filled with mountains and forests, all vibrating with mystery and life. However, the origins of this great land were actually borne of desperation to escape a terrible evil. This evil was known as the Droch-Shúil, and its power was unleashed by the race of Elves called the Ónarach.

For two thousand years, Alandria was a place of peace and beauty, and its inhabitants lived in harmony. But the darkness would find them again. With great subtlety, the Droch-Shúil would implant itself in the hearts of a small band of weak-minded beings of each race, eventually separating and dividing Shifters, Faeries, and Elves and creating hostility between and even within their respective territories. As a result, after so much peace, the seeds of darkness that had been quietly growing came to maturity and there was war. Many were lost, but it appeared that after months of bloodshed, the power of the Droch-Shúil had failed. With celebration, the king and queen of Feraánmar, the domain of the Faeries and mighty Ferrishyn, greeted the king of Lumari, the territory of the Elves, to sign the final articles of peace.

As the celebration began in the Faeries’ capital city of Elnye, the power of the Droch-Shúil aimed a surprise final assault. The king of Lumari escaped badly wounded, but there was no escape for the leadership of Feraánmar. The king, queen, and their daughter were all killed. The king of Lumari returned to his dominion to find it overrun. His son, the prince, had run out to battle and never returned, his body never found. The king was forced into hiding.

New leadership would steal the thrones of power in Alandria. In the dominion of the Faeries and Ferrishyn, the Paladin would begin their rule. While in the territories of the Elves, the former king’s foolish and sadistic nephew, who had in fact murdered his own father and his mother, took control. The magic of the Droch-Shúil had won.

And yet even as this time of darkness had begun, deep in the forest of Dul-Isteach, words of an ancient prophecy began to come to life. There was one last hope for Alandria, hope that for years had been perfectly hidden... hope that at last must be found.

A different realm. An earlier time.

Darkness had fallen, but the stars refused to shine. Dulled light shone softly from two reluctant moons hanging, bloated with grief, reflecting the heart of Alandria. The king and queen of the Faeries had been slain, along with the princess, the remaining heir of Feraánmar. Her love and partner in rebuilding the treaties between the races, the prince of the Elves and heir to the throne of Alandria, was lost—presumed dead. As was the hope for a united Alandria.

In the depths of the Forest of Lumei, the Elders carried out their last act before they disbanded. Some would diminish with time, cloaked in glamour to live out their days. Some would go into hiding to preserve what remained of the ancient magic for another life.

Floating balls of fire along the periphery lit the clearing. There were no additional witnesses but for the forest and the creatures that lay within; their cries and calls were the only sounds to be heard in the vast silence. At the cry of the raven, seven figures hooded in ancient tradition walked ceremonially from the forest, each stopping at one of the seven points indicated on the star burned into the ground. Robes colored in blue, purple, brown, dark green, crimson, light green, and white each represented a different tribe. They carried in one hand a single candle with a purple flame flickering in the stillness of the night. In the other, a small silver dagger carried by the hilt, point toward the sky. The light from the flames reflected off each of the blades, dancing onto the trees and creating the illusion of a greater light. The hooded figure in green at the top point of the star said something in a very low, monotone voice. A single word in an ancient language.

Everything went silent: all the creatures of the earth and sky. Simultaneously, the flames extinguished. Darkness.

Two heartbeats of silence. As suddenly as all fell into darkness a sound arose so primal, so ancient, it seemed to come from the depths of the earth. Flames ignited with a burst of life, permitting the creatures to release their cries, their sorrows for the tragedy that had befallen them all. In the center of the star, where there had been only a large, flat-topped boulder, stood another hooded figure, this one cloaked in black. His head was bowed, his stature humbled, wrists bound in front of him by shackles alight with a fire that did not burn.

Responding to a silent cue, each of the hooded beings walked toward the center, toward the figure on the rock. Surrounding the boulder, they extended their hands, palm to palm, symbolically closing the circle, their reverent chanting creating a low hum. Then once again, simultaneously, there was silence, this time weighted with anticipation and something tangible in the air... magic, old magic. The hood in the center dropped to his knees. The candles were raised to the sky, then brought down and placed along the edges of the rock’s platform where the flames illuminated the earth. Stains of past sacrifices opened the ears of the earth and beseeched the rocks to bear witness. The green hood that opened the ceremony once again uttered a single word in that same monotone voice.

The hoods reached with their left hands, grabbed their daggers by the blades, and swiftly pulled the hilt down, uttering not a single expression or sound. Palms squeezed tightly and blood trailed down wrists to fall on the ground and rock.

The white hood released the bindings of the black-hooded being in the center with a simple touch of his hand. The black hood held out his left hand, palm up, waiting for the sting of sliced flesh. He closed his eyes and smelled the coppery scent of his own blood before registering the pain. He refused to flinch or utter a sound. He wouldn’t dare. He deserved this, and more. This was the commencing of his punishment.

Then the white hood spoke so all present could understand. “Earth, receive this blood, hear our petition. Rock, take this offering and bear witness to this sacrifice.”

The blue-hooded figure to the right looked up at the black hood on the rock and said, “The blood spilled here tonight is not only an offering, but represents what will happen to the one who breaks the vow. The boulder is the strength of the bond created and serves as silent witness. The earth absorbs the secrets of the vows; it is ever present and will execute punishment as it deems necessary, even if all others are unaware.”

The purple-hooded figure spoke out with a voice that carried power. “Your crime of murder upon the Ferrishyn innocents and royals in hiding is worthy of instant death.” He took a moment to let the gravity settle. “Due to the desperate circumstances of all of our people, mercy has been extended to you. You have been spared and commissioned with the guardianship and protection of a blessed child. Let it be known...” He paused, looked the central hood straight on. He gripped his blade once more, releasing a greater flow of blood to the earth. “You are hereby banished!”

Beyond the Shroud by V M Jones
The Firebrand Who Unlocked His Heart by Anne Fraser
Amigos en las altas esferas by Donna Leon
The Four Johns by Ellery Queen
Listen To Me: A Rock Star Romance (True North) by Carrie Elliott
The Baghdad Railway Club by Andrew Martin
Cast a Road Before Me by Brandilyn Collins
Hunger Journeys by Maggie De Vries
Consequence by Eli Yance
The Dylanologists by David Kinney
Our partner