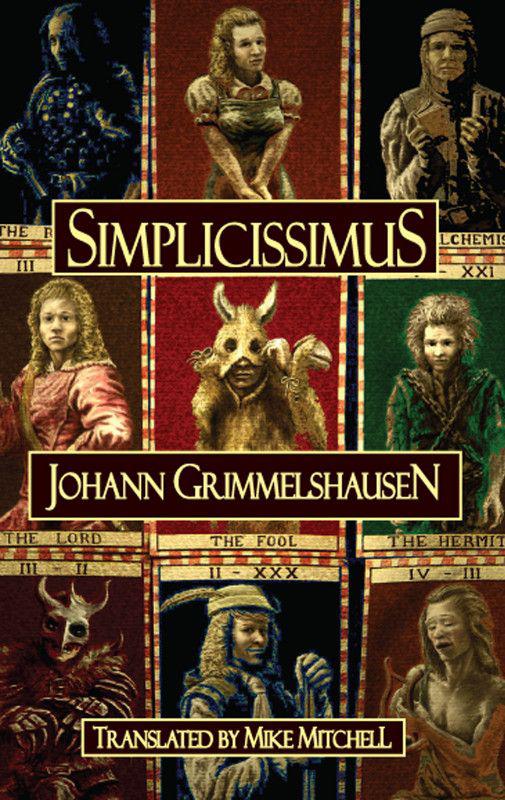 Translated and with an introduction by Mike Mitchell

Published in the UK by Dedalus Limited

Dedalus is distributed in the USA and Canada by SCB Distributors,

Dedalus is distributed in Australia by Peribo Pty Ltd,

First published in Germany in 1668

English translation by S. Goodrich in 1912

New translation by Mike Mitchell in 1999

The right of Mike Mitchell to be identified as the translator of this work has been asserted by him in accordance with the Copyright, Designs and Patents Act, 1988.

Printed in Finland by WS Bookwell

A C.I.P. listing for this book is available on request.

Mike Mitchell is one of Dedalus's editorial directors and is responsible for the Dedalus translation programme. His publications include
The Dedalus Book of Austrian Fantasy
,
Peter Hacks: Drama for a Socialist Society
and
Austria
in the World Bibliographical Series. His translation of Rosendorfer's
Letters Back to Ancient China
won the 1998 Schlegel-Tieck Translation Prize after having been shortlisted in previous years for his translations of
Stephanie
by Herbert Rosendorfer and
The Golem
by Gustav Meyrink. His translation of
Simplicissimus
was shortlisted for The Weidenfeld Translation Prize in 1999 and
The Other Side
by Alfred Kubin in 2000.

In these days (which some believe to be the last days) a new sickness has appeared among ordinary people. When those who have been infected by it have scratched together enough money with their sharp practices that they can afford, besides a few coppers in their purse, to dress themselves after the latest absurd fashion with thousands of silk ribbons, or when by some lucky chance they have made a name for themselves, they immediately try to pass themselves off as knights and nobles of ancient lineage. It usually turns out that their grandparents were day-labourers, carters and porters, their cousins muleteers, their brothers tipstaffs and turnkeys, their sisters whores, their mothers bawds, if not witches; in short that their whole ancestry, right down to the thirty-second degree, is as tainted and tarnished as ever Seb Sugar’s gang of thieves in Prague were. Indeed, these new-minted nobles are themselves often as black as if they had been born and bred in Guinea.

I wouldn’t want to be likened to such foolish folk even though, to tell the truth, I have often fancied I must owe my existence to some great lord, or at least a gentleman, since I have a natural inclination to follow the nobleman’s trade, if only I had the necessary capital and equipment.

To be serious, though, it is true that my birth and upbringing can well be compared with that of a prince, if you overlook the one great difference. How can that be? you ask. My Da (for that is the title we give to fathers in the Spessart) had a palace of his own, as good as any man’s, and finer than any king could build with his own hands. Its facade was finished off with clay and its roof, instead of sterile slate, cold lead and red copper, was covered with the straw on which the noble grain grows. And to make a show of his wealth and nobility, my Da did not, as other great lords do, build the wall round his castle out of stones, such as you may find by the roadside or dig out of the ground in barren places, much less out of common brick, which can be moulded and fired in a short time. No, he took oak, that noble and useful tree from which pork sausages and fat hams grow and which takes over a hundred years before it reaches full maturity. Where is the monarch who will follow him in that?

He had his rooms and chambers blackened all over inside with smoke, since that is the most permanent colour in the world and to paint them by that method takes longer than any artist would spend on even the best of his paintings. The wall-hangings were of the most delicate weave in the world, being made by the weaver who, in olden times, dared to challenge Minerva herself to a contest. The windows were dedicated to St Notoglas for the very good reason that he knew that, counting from the hemp or flax seed, the paper with which they were covered took much more time and labour before it was finished than the finest and clearest Murano glass. It was his station in life that led him to believe that things which required much labour to produce were therefore valuable and more costly, and that costly things were best suited to the nobility.

Instead of pages, lackeys and grooms, he had sheep, goats and pigs, each neatly clad in its own livery, which often used to wait upon me in the fields, until I drove them home. His armoury was well stocked with ploughs, hoes, axes, picks, spades and forks for both manure and hay. He practised daily with these weapons; clearing the ground and digging were for him a military exercise, just as they were for the ancient Romans in times of peace. The oxen were the company he commanded, spreading manure was his fortification and ploughing his campaigning, but mucking out the stables was his noble pastime, his jousting. By these means he dominated the whole round world, as far as he could walk, and at every harvest he gathered in rich tribute from it.

All this means nothing to me and I don’t give myself airs because of it, so that no one will have reason to scoff at me along with other would-be nobles from the same background. I consider myself no better than my Da was, whose house was in a merry part of the country, namely over the hills and far away in the Spessart. The fact that I have refrained from going on at great length about my Da’s lineage, race and name is for the sake of brevity. This is not an application for entry to an abbey reserved to the nobility, in which case I would have to swear to my ancestry; it is sufficient for our purposes that you know that I come from the Spessart.

Since, however, it has been made clear that my Da’s household was truly noble, any intelligent person will readily conclude that I enjoyed a corresponding upbringing. And anyone who believes that will not be deceived, for by the age of ten I had already grasped the principles of my Da’s aforementioned noble exercises. However as far as learning was concerned I matched the famous Amphisteides, of whom Suidas reported that he could not count beyond five. The reason was perhaps that my Da, in his high-mindedness, followed the custom of the present age in which people of quality do not bother much with study, or tomfoolery as they call it, because they have other people to do their scribbling for them. But I was an excellent musician on the bagpipes, on which I could play the most beautiful dirges. In religion, however, I do not believe there was another boy of my age in the whole of Christendom who was like me, for I knew nothing of either God or man, heaven or hell, angels or the devil and could not tell the difference between good and evil. As you can well imagine, with such knowledge of theology I lived like our first parents in paradise, who in their innocence knew nothing of illness, death and dying, and even less of the resurrection. What a fine life (though you may say fool’s life) where you didn’t have to bother with medicine! In the same way you can judge my knowledge of law and all other arts and sciences. Indeed, so perfect and complete was my ignorance that it was impossible for me to know that I knew nothing. I repeat: what a fine life it was that I led in those far-off days. But my Da did not want me to enjoy this bliss any longer. He thought it right and proper that, being nobly born, I should live and act according to my nobility, for which reason he began to educate me for higher things and give me harder lessons.

Chapter 2
Describes Simplicius’ first step up the ladder of dignity, containing also praise of shepherds and, in addition, some excellent instruction

He invested me with the most magnificent dignity that could be found, not only in his household, but in the whole world, namely with the office of herdsman. First of all he entrusted his swine to my care, then his goats, and finally his whole herd of sheep. I had to mind them, take them out to pasture and guard them from the wolf with my bagpipes (the sound of which, so Strabo writes, fattens the sheep and lambs in Arabia). I was like David, except that he had a harp instead of bagpipes, and that was no mean beginning. Indeed, it was a portent that with time, and if fortune should favour me, I would become a famous man, for from the earliest days persons of note have been shepherds, as we can read in the Bible of Abraham, Isaac, Jacob and his sons. Even Moses had to mind his father-in-law’s sheep before he became leader and law-giver to six hundred thousand Israelites.

And if someone should object that these were holy and godfearing men, not Spessart peasant boys ignorant of God, I would have to agree. Yet why should the innocent that I was be blamed for that? Similar examples could be found among the ancient heathens as well as among the chosen people of God. Among the Romans there were noble families that called themselves the Bubulci, Statilii, Pomponii, Vituli, Vitellii, Annii, Caprae and so on because they had to do with those animals and perhaps even herded them. Romulus and Remus themselves were shepherds; Spartacus, who made the whole power of Rome tremble, was a shepherd. Does not Lucian record in his
Dialogo Helenae
that Paris, the son of King Priam, and Anchises, father of the Trojan prince Aeneas, were shepherds? And Endymion, renowned for his beauty that warmed even the cold heart of Selene, was he not also a shepherd? So too was the terrible Polyphemus. Even the gods, as Cornutus tells us, were not ashamed of that calling. Apollo kept the cattle of Admetus, King of Thessaly; Mercury, his son Daphnis, Pan and Proteus were all great shepherds, for which reason our foolish poets count them the guardian deities of shepherds. Mesha, King of Moab was a sheepmaster, as one can read in the second book of Kings; Cyrus, the mighty king of the Persians, was not only raised by Mithridates, a shepherd, but kept sheep himself. Gyges was first a herdsman and then became king through the power of a ring and Ismail Shah, a Persian king, also minded sheep in his youth. Philo Judaeus puts the matter very well when he says, in his Life of Moses, the office of herdsman is both a preparation for and the first step in exercising command. For just as the warlike and martial arts are first practised in the hunt, so men who are intended for government receive their first training in the gentle and amiable office of herdsman. My Da must have known this very well, and to this very hour it gives me no small hope I may yet rise to future greatness.