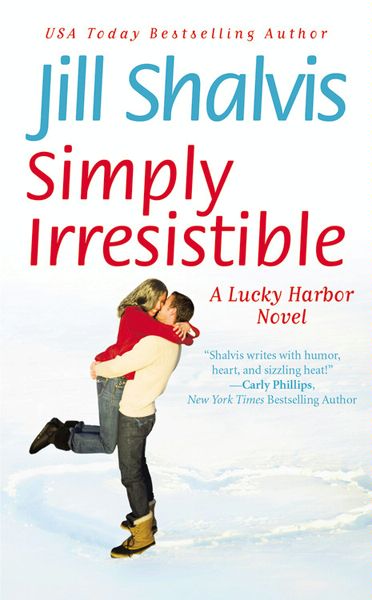 A few snowflakes floated down, soft and lazily spinning in the wind, and through them Jax cocked his head, watching her as
if something about her didn’t quite add up for him.

She could have told him not to bother trying to figure her out. No one had managed yet, not even herself.

“Working on it,” she said and gave him a small smile. It was hard not to—he just had that kind of face.

He returned the smile and stepped a little closer to her, which was when she discovered several things.

He smelled good.
Guy
good. As in, she wanted to inhale him. Her body tingled, suddenly brought to a hyper-awareness that felt almost foreign.

When she opened her eyes again, he was even closer, and his eyes weren’t the solid warm caramel she’d thought but had flecks
of gold dancing in them, as well. She could have happily, willingly, drowned in all that deliciousness. Death by deliciousness.

Not a bad way to go.

“Jill Shalvis is a total original! It doesn’t get any better.”

Praise for
Jill Shalvis
and Her Novels

“Jill Shalvis has the incredible talent of creating characters who are intelligent, quick-witted, and gorgeously sexy, all
the while giving them just the right amount of weakness to keep them from being unrealistically perfect.”

“Shalvis’s writing is a perfect trifecta of win: hilarious dialogue, evocative and real characters, and settings that are
as much a part of the story as the hero and heroine. I’ve never been disappointed by a Shalvis book.”

“A Jill Shalvis hero is the stuff naughty dreams are made of.”

“Fast-paced and deliciously fun. Jill Shalvis sweeps you away!”

“Riveting suspense laced with humor and heart is her hallmark and Jill Shalvis always delivers.”

—D
ONNA
K
AUFFMAN
,
USA Today
bestselling author of
Some Like It Scot

Excerpt from
The Sweetest Thing
copyright © 2010 by Jill Shalvis

Praise for Jill Shalvis and Her Novels

A Preview of
The Sweetest Thing

To another middle child, the middle sister,
the middle everything. To Megan, the peacemaker,
the warrior princess, the fierce, loyal protector
of our hearts.

“I chose the path less traveled,
but only because I was lost. Carry a map.”

M
addie drove the narrow, curvy highway with her past
still
nipping at her heels after fourteen hundred miles. Not even her dependable Honda had been able to outrun her demons.

Or her own failings.

“Come on, listeners,” the disc jockey said jovially on the radio. “Call in with your Christmas hopes and dreams. We’ll be
picking a random winner and making a wish come true.”

“You’re kidding me.” Maddie briefly took her eyes off the mountainous road and flicked a glance at the dash. “It’s
one
day after Thanksgiving. It’s not time for Christmas.”

As if. But she let out a breath and tried for whimsy. Once upon a time, she’d been good at such things.
Maddie Moore, you were raised on movie sets—fake the damn whimsy.
“Fine. I’ll wish for…” What? That she could’ve had a do-over with her mother before Phoebe Traeger had gone to the ultimate
Grateful Dead concert in the sky? That Maddie had dumped her ex far sooner than she had? That her boss—may he choke on his
leftover turkey—had waited until
after
year-end bonuses to fire her?

“The lines are lit up,” the DJ announced. “Best of luck to all of you out there waiting.”

Hey, maybe
that’s
what she’d wish for—luck. She’d wish for better luck than she’d had: with family, with a job, with men—

Well, maybe not men. Men she was giving up entirely. Pausing from that thought, she squinted through the fog to read the first
road sign she’d seen in a while.

About time. Exercising muscles she hadn’t utilized in too long, she smiled, and in celebration of arriving at her designated
destination, she dug into the bag of salt and vinegar potato chips at her side. Chips cured just about everything, from the
I-lost-my-job blues, to the my-boyfriend-was-a-jerk regrets, to the tentatively hopeful celebration of a new beginning.

“A new beginning done right,” she said out loud, because everyone knew that saying it out loud made it true. “You hear that,
karma?” She glanced upward
through her slightly leaky sunroof into a dark sky, where storm clouds tumbled together like a dryer full of gray wool blankets.
“This time, I’m going to be strong.” Like Katharine Hepburn. Like Ingrid Bergman. “So go torture someone else and leave me
alone.”

A bolt of lightning blinded her, followed by a boom of thunder that nearly had her jerking out of her skin. “Okay, so I meant
pretty please
leave me alone.”

The highway in front of her wound its way alongside a cliff on her right, which probably hid more wildlife than this affirmed
city girl wanted to think about. Far below the road on her left, the Pacific Ocean pitched and rolled, fog lingering in long,
silvery fingers on the frothy water.

Gorgeous, all of it, but what registered more than anything was the silence. No horns blaring while jockeying for position
in the clogged fast lane, no tension-filled offices where producers and directors shouted at each other. No ex-boyfriends
who yelled to release steam. Or worse.

No anger at all, in fact.

Just the sound of the radio and her own breathing. Delicious,
glorious
silence.

As unbelievable as it seemed, she’d never driven through the mountains before. She was here now only because, shockingly,
her mother’s will had listed property in Washington State. More shockingly, Maddie had been left one-third of that property,
a place called Lucky Harbor Resort.

Raised by her set-designer dad in Los Angeles, Maddie hadn’t seen her mother more than a handful of times since he’d taken
custody of her at age five, so the will had been a huge surprise. Her dad had been just as shocked
as she, and so had her two half-sisters, Tara and Chloe. Since there hadn’t been a memorial service—Phoebe had specifically
not wanted one—the three sisters had agreed to meet at the resort.

It would be the first time they’d seen each other in five years.

Defying probability, the road narrowed yet again. Maddie steered into the sharp left curve and then immediately whipped the
wheel the other way for the unexpected right. A sign warned her to keep a lookout for river otters, osprey—what the heck were
osprey?
—and bald eagles. Autumn had come extremely late this year for the entire West Coast, and the fallen leaves were strewn across
the roads like gold coins. It was beautiful, and taking it all in might have caused her to slide a little bit into the next
hairpin, where she—oh, crap—

Barely missed a guy on a motorcycle.

“Oh, my God.” Heart in her throat, she craned her neck, watching as the bike ran off the road and skidded to a stop. With
a horrified grimace, she started to drive past, then hesitated.

But hurrying past a cringe-worthy moment, hoping to avoid a scene, was the old Maddie. The new Maddie stopped the car, though
she did allow herself a beat to draw a quick, shuddery breath. What was she supposed to say—
Sorry I almost killed you, here’s my license, insurance, and last twenty-seven dollars?
No, that was too pathetic.
Motorcycles are death machines, you idiot, you nearly got yourself killed!
Hmm, probably a tad too defensive. Which meant that a simple, heartfelt apology would have to do.

Bolstering her courage, she got out of the car clutching
her Blackberry, ready to call 911 if it got ugly. Shivering in the unexpectedly damp ocean air, she moved toward him, her
arms wrapped around herself as she faced the music.

Please don’t be a raging asshole…

He was still straddling the motorcycle, one long leg stretched out, balancing on a battered work boot, and if he was pissed,
she couldn’t tell yet past his reflective sunglasses. He was leanly muscled and broad shouldered, and his jeans and leather
jacket were made for a hard body just like his. It was a safe bet that
he
hadn’t just inhaled an entire bag of salt-and-vinegar chips. “Are you okay?” she asked, annoyed that she sounded breathless
and nervous.

Pulling off his helmet, he revealed wavy, dark brown hair and a day’s worth of stubble on a strong jaw. “I’m good. You?” His
voice was low and calm, his hair whipping around in the wind.

Irritated, most definitely. But not pissed.

Relieved, she dragged in some air. “I’m fine, but I’m not the one who nearly got run off the road by the crazy LA driver.
I’m sorry, I was driving too fast.”

“You probably shouldn’t admit that.”

True. But she was thrown by his gravelly voice, by the fact that he was big and, for all she knew, bad, to boot, and that
she was alone with him on a deserted, foggy highway.

It had all the makings of a horror flick.

Was she? Probably she was a little lost mentally, and quite possibly emotionally, as well. Not that she’d admit either. “I’m
heading to Lucky Harbor Resort.”

He pushed his sunglasses to the top of his head, and
be still her heart, he had eyes the
exact
color of the caramel in the candy bar she’d consumed for lunch. “Lucky Harbor Resort,” he repeated.

The Old House by Willo Davis Roberts
The Art of Stealing Hearts by Stella London
Tekgrrl by Menden, A. J.
Range of Light by Valerie Miner
Paint by Magic by Kathryn Reiss
Takeover by Viguerie, Richard A.
Shadowglass by Erica Hayes
In the Grey by Christian, Claudia Hall
Rebecca Rocks by Anna Carey
The Urban Fantasy Anthology by Beagle, Peter S.; Peter S. Beagle; Joe R. Lansdale
Our partner