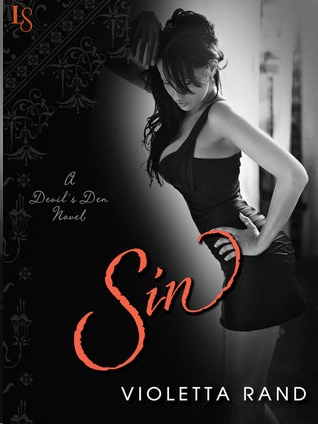 Sin
is a work of fiction. Names, places, and incidents either are products of the author’s imagination or are used fictitiously. Any resemblance to actual events, locales, or persons, living or dead, is entirely coincidental.

L
OVESWEPT
is a registered trademark and the
L
OVESWEPT
colophon is a trademark of Penguin Random House LLC.

This book contains an excerpt from the forthcoming book
Loving Lucas
by Violetta Rand. This excerpt has been set for this edition only and may not reflect the final content of the forthcoming edition.

The “buckle your seat belt” sign flashes while the pilot’s baritone blares over the speaker, asking us to prepare for our final descent into the Corpus Christi International Airport. I lean back against the headrest and take a deep breath. My three-week vacation to Paris turned into six. It feels strange coming home; I’m almost tempted to pack up and return to Europe right away. I like visiting places where no one knows me; anonymity is priceless. Although I’m not a Hollywood diva, I’ve earned my stripper stripes in three states—Texas, Oklahoma, and Nevada.

After spending ten days at the Hôtel Raphael, shopping along the tree-lined Avenue des Champs-Elysées, and sampling the finest cuisine, I ventured into the Penthouse Club. It didn’t take long for the manager to offer me a position. I worked three nights, enjoying the international intrigue of entertaining James Bond–like men with heavy accents and fat wallets. Hell, one table dance cost fifty dollars.

After my little detour, I met my friends in Normandy, where we rented the Old Mill House for a week. I celebrated Christmas in a sixteenth-century cottage with shitty cellphone service. Not my idea of paradise, per se, but I managed to talk to my boyfriend, Wesley, a couple of times while he was on vacation in Maui.

Coming home to Texas feels similar to switching from a luxury car to a truck.

The plane lands smoothly, then taxis slowly to Gate Five. I check my watch: nine thirty on Thursday night. I stare out the narrow window. There’s heavy lighting on the tarmac and I watch the baggage cart get into position. I’m grateful I’m sitting in first class; I’ll disembark first.

After we come to a full stop, I collect my carry-on and purse. I switch on my iPhone and read three texts from Wesley. He’s waiting for me in the bar outside the secured area. The door opens and I rush for the stairs, ignoring the overly polite flight attendant, who waves and smiles at me. I need a cigarette and have half a pack left over from my two-day excursion in Rome. I walk briskly up the skywalk and finally make it to the gate: freedom.

My heels click on the tile floor as I half run for the escalator. My gaze drifts around the open area, from the sea-green walls to the beige-colored floor. There are dozens of pictures on the walls, some showcasing historical shots of the city in black-and-white, others on loan from the Art Museum of South Texas. I shake my head and smile. After admiring classics at the Louvre Museum and galleries in Paris, I appreciate the simplicity of my hometown.

Instead of riding the escalator, I take the stairs two at a time, excited to see my boyfriend again. He’s sitting at the bar, his back to the entrance. There are only a handful of people inside and he doesn’t hear me come in; he’s on his cellphone. I stop and listen, curious to find out who he’s chatting with.

“Come on, Monica,” he says. “She’s not even here yet.” There’s a pause in the conversation and he sighs. “Yes, I’ll tell her everything. Tonight.” He slams the phone down.

My joy vanishes and I struggle to keep my hands from shaking. I know what’s coming. Should I turn around and catch a cab? Deal with his ass later? Or confront him? For some reason he swivels around on the bar stool. When our gazes meet, he smiles.

I eye the longneck in his hand. “Started the party without me?”

He takes a long swallow, sets the empty bottle on the bar, slaps a bill down, then joins me. He gives me a bear hug, kissing the tip of my nose. Not the passionate reunion I’d envisioned. A warm chill spirals up my spine; his lips have been somewhere else. My gaze drops to his crotch, among other body parts. I grit my teeth. This is not the time or place to start shit. I’ll wait. Without asking, he takes control of my carry-on.

“Yeah.” I hand him my baggage claim ticket. “Nothing sounds better.”

An hour later, he pulls into my driveway. I don’t wait for him to open the passenger door; I jump out and meet him at the trunk. I have four oversized suitcases and he grabs three.

“Buy out the boutiques?”

We reach the front door and he sets my bags down. He fishes in his front pocket, shows me the key I gave him, then unlocks my door. “Ready?”

I shrug and head in first, noticing that everything looks the way I left it; even the kitchen light is on. I drop my bag and run for the fridge, where I pull an open bottle of red wine off the top shelf. Grabbing a glass that I must have left on the counter, I pour a generous amount and take a long drink. When I look up, Wesley is standing in the arched doorway with his arms crossed over his chest.

“Ran out of beverages in first class?”

“Hardly,” I answer in my best bitch voice. “Abandon commitment the minute my ass hit the plane?”

He flushes and drops his hands to his sides. “What are you talking about?”

I shake my head. Cheating is one thing; lying about it, another. “Don’t play innocent,” I warn. “I overheard your conversation in the bar. Monica?”

“Really?” I down the rest of my drink. “Did you have some elaborate scene planned out? Maybe breakup sex? I’m not into it, Wesley, and you know it. Spare me any sentimental bullshit.”

I shrug my left shoulder. “If the boot fits.”

“We met three weeks ago, the day after you were supposed to come home.”

“How so?” I step closer, my temper flaring. “You didn’t invite me to Maui. I spent Christmas in France—without my boyfriend. Explain
that
first.”

His shoulders droop and he stares at the floor. “Are you prepared for the truth?”

“I can’t introduce you to my family, Macey.”

“Old-Texas-money routine? Still relying on that excuse? Come on, Wesley, it’s 2015, not 1960. Afraid to shock your mommy? You’ve been banging a stripper for over a year. We don’t qualify as an affair anymore, we’re in a committed relationship.”

“You don’t even have a high school diploma.”

“Now it’s about my lack of education? You knew that up front. Didn’t hear you complaining when we got horizontal.”

His long, exaggerated sigh has the same effect on me as fingernails on a chalkboard. “My biological clock is ticking,” he says.

Seriously?
This oversized jock strap has a biological clock? All of a sudden he wants a family? The guy who works out naked in his bedroom staring at himself in floor-to-ceiling mirrors? “You’re full of crap.”

He slaps his palms on the tabletop. “I’m not.”

Then it hits me; this isn’t about pedigrees or family. It’s money. His parents have known about me all along. When he spent Christmas with them, they probably pressured him into breaking up with me. “Did the trust fund run out?”

“What?” His head shoots up.

He looks so lost and confused. “That’s right, baby,” I taunt. “Where’d you think I got the money to pay for all this? Sure, I bank at the club. But…I have a trust fund, too.”

“No,” I assure him. I just never told him I have money. “My financial statements have nothing to do with our relationship.”

“Guess you should have considered that before you cheated, Wesley. My mother died when I was very young. That left Daddy and me. Let’s just say he didn’t need a daughter messing with his player lifestyle. He died six years ago, leaving behind a legacy of illegitimate children, venereal diseases, and a fat bank account.”

He gets up, staring at me. “This changes everything.”

I laugh, thoroughly amazed by his audacity. “How so?”

“My parents may overlook your sordid past if you’re willing to, well,
change.
”

That pisses him off. He grabs my arms and gives me a good shake. “You left me alone for six weeks. What was I supposed to do?”

He slaps my face. Not hard, but with enough force for it to sting. I shake his hands loose and step back. “That’s the last time you’ll
ever
touch me. Get your shit and leave. Now.”

“Now,”
I repeat. There’s nothing left to say. He’s Texas blue blood and I’m a mutt.

“For fucking another girl or for becoming the domestic violence poster boy overnight?” Grim satisfaction comes over me as I stare at his shocked face.

“Too little, too late.” I swallow my tears, putting on my best I-don’t-give-a-shit face. “Besides,” I say. “Oil and gambling fortunes don’t mix well together in God’s country.”

That’s how my father got rich, playing poker in underground clubs between East Texas and Alabama. Like a rock star, he went on tour seven months out of the year. He’d pop up on holidays with a stack of presents and the latest half-his-age piece of ass hanging off his arm like a good luck charm. I’ve never shared that part of my life with anyone, until now.

I follow Wesley upstairs. I dig out an oversized backpack and throw it at him. “Here. Make sure you don’t leave anything behind.”

He yanks his shirts off hangers, digs his jeans and shorts out of his designated drawer, then heads to the bathroom to retrieve his shaving kit. When he’s finished, he just looks at me. “I don’t like this…”

There’s an awkward moment of silence. He drops the key where I told him to, then struts out of my room. I wait for the front door to slam shut before I curl into a fetal position and let loose. All the tears I’ve been holding back since I overheard his conversation in the bar fall like torrential rain. My gut aches and I can barely breathe, it hurts so much.

Home for less than an hour and my whole world just disintegrated. Of course I’ll do what I always do when I need to forget something: I’ll dance my ass off.

The Highlander by Elaine Coffman
La caverna de las ideas by José Carlos Somoza
Twain's Feast by Andrew Beahrs
Over the Fence: Lyssa Layne's Baseball Romances by Lyssa Layne
Eye of the Beholder by Dana Marie Bell
Till Death Do Us Bark by McCoy, Judi
Don't You Love Your Daddy? by Sally East
Getting Old Is Criminal by Rita Lakin
Ballers Bitches by King, Deja
All Fall Down by Jenny Oldfield
Our partner