Sinful Ever After (Sinful Serenade Book 5) 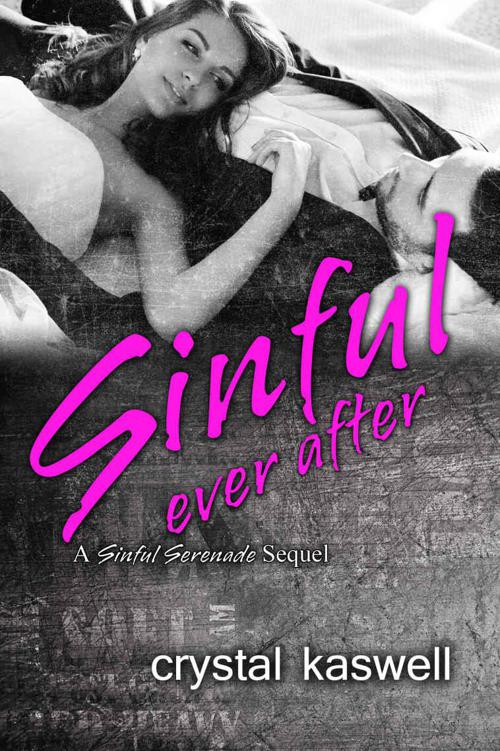 D
ear readers, thank you for sticking with the Sinful Serenade series though the last four books. I love these guys to pieces. I hope you love them as much as I do :)

Sinful Ever After
is a sequel to the first four books in the Sinful Serenade series and it should be read after book four (Pete's book,
Play Your Heart Out
). It is not a standalone novel.

This is the last Sinful Serenade book, but don't dismay. It's not the last of the Sinful Guys! Miles, Drew, Tom, and Pete will be appearing in spin-off series Dangerous Noise. The first Dangerous Noise book, featuring guitarist Ethan and his heroine Violet, will be out later this year. Its working title is
Dangerous Kiss

For every boy or girl who ever stepped on stage and sang, strum, rocked, or played his heart out.

That can't be him. It must be a mirage. There's no way Miles is standing in front of the bio building, his hands in the pockets of his leather jacket, his lips curled into a smile.

I must be imagining things.

He's supposed to be in Tokyo. Or was it Osaka? It's hard to remember your boyfriend's schedule when he's a globe-jetting rock star.

His blue eyes fix on me.

"You survived your first semester of medical school." Miles slides his arms around me.

His arms are heaven. I grab onto his waist as tightly as I would if I were on the back of his bike. Miles is here. My boyfriend is here. We have the next four weeks to be together before I'm due back for Spring semester.

His hand curls around my cheek. "I missed you."

"I missed you more."

He presses his lips to mine.

He tastes so fucking good.

I dig my hands into his leather jacket. It's too slick for me to get a grip, so I tug at his soft t-shirt. He's here. He's not in Asia. He's at UCI Medical School, with his arms around me, with his lips against mine.

I slide my hands under his t-shirt and soak in the warmth of his skin. "You're supposed to be in Japan. Didn't you have a show?"

"In Osaka." He pulls me closer. "Encore was fourteen hours ago."

He slides his hand around my neck. His voice is light, teasing. "You catch on fast."

I flip him off. It only makes my smile wider. At the moment, it doesn't feel like I'm ever going to stop smiling. "Give me a break. I've only slept ten hours in the last week."

He smiles back. "Good thing I'm planning on spending the next two weeks in bed."

I nod and look up at him. I'm nearly six feet tall, but Miles is still two inches taller. "I can't believe you're here."

I haven't seen him in a month. Twenty-nine days, to be exact. His band, Sinful Serenade, has been on an international tour. This was the first tour where neither one of us could visit.

It's the longest we've been apart.

Miles spends four or five months a year on the road. I should be used to it by now, but I'm not. Every time he's away, I miss him more than the time before. Every time, he feels farther away.

Every time, the separation is sweeter.

I missed him so much.

My knees falter as I sink into his body. I'm too tired to move. But it's okay. He's got me.

He pulls me closer. His lips hover over my ear. "How is it that none of your classmates recognize me?"

I nestle into his chest. "Do you want me to scream 'Oh My God, are you really Miles Webb? I love that one song you do,
No Way in Hell
.'" I offer my best schoolgirl giggle. "Is it really about falling in love?"

"I want you to scream." He sucks on my earlobe. "But only the Miles part, and only once we're alone." His hands go to mine. "You have any energy left?"

"Enough for a proper reunion."

He laughs. "I'm not sure you do." He squeezes me one more time then he steps back. He nods
follow me
.

I take a shaky step. Miles has a point. I can barely walk. I'm not sure I have the energy to fuck his brains out the way I want to.

His expression is a mix of amusement and concern. "I'm taking you somewhere. We can go to bed after that."

Miles laughs. His piercing blue eyes shine in the sunlight. "The kind where you come until you can't take it anymore."

I
aspire to make conversation, but my lids are heavy. I close my eyes, rest my head against the window, and drift in and out of sleep.

Miles squeezes my hand. "You're exhausted, aren't you?"

"Was thinking about taking you to a hotel in Beverly Hills and fucking you against the wall."

"You were not. You're teasing."

"I was
thinking
about it." He smiles. "Wasn't a plan yet, but it occupied a lot of space in my thoughts."

"It's been twenty-nine days."

"I think you're as responsible for my hand cramps as finals are."

He laughs. "For once, I beat school."

"Miles, it's been twenty-nine days."

"And we aren't having sex right now."

"Better change that soon." He squeezes my hand.

I squeeze back. He rubs the space between my thumb and my pointer finger with his thumb. It's sweet, intimate. He's really here. We're really in the same space together.

My hands go to the zipper of my hoodie. I have a surprise for him, but I'm terrified to reveal it. This is serious, forever, the next level of commitment.

It's been a year, but we haven't talked much about forever. A while back, he asked about getting married. I said I wanted to wait until I was done with my first year of medical school, and that was it. We haven't talked about anything since.

We haven't even discussed getting a place together. I stay with my parents during the week—they live twenty minutes from campus—and with Miles on the weekends. His place is nearly two hours from school, depending on the traffic.

Soon. I need to do it the first chance I get. Before the sex. I don't want him getting derailed when we finally get out of our clothes.

It's been way too long.

Miles changes lanes and exits the freeway. He pulls onto a familiar street. We've been here before. Together.

There's a cemetery on our left—the cemetery where his uncle is buried.

It's a strange choice for a celebration, but it's perfect.

Miles parks and helps me out of the car. He slides one arm around my waist.

His eyes go to the ground. Is he actually bashful? I'm not sure I've ever seen him bashful before.

"Sure you don't want a celebration with champagne on the beach?" He leads me through the wrought iron gates.

"Neither one of us drinks."

"What if I'm licking it off your tits?"

"Then you're the one drinking it."

He laughs and squeezes my hand.

The shining sun casts a glow over the vivid green grass. The world is alive today. Except for the mild chill in the air, there are no signs of winter here. The sky is bright blue and free of clouds. The air is somewhere between crisp and warm.

Miles's eyes fix on mine. "You remember what I said about Damon?"

"How he'd sit you down and tell you to stop running from your feelings?"

"Yeah. I always have a lot of time to think when we're on the road. That's how it started, me taking drugs. I needed a way to shut out my thoughts." He runs his fingers through my hair.

"I know." I lean into his touch. "Everyone runs sometimes."

"Yes, I did. Just I used school instead of drugs." I stare into his clear blue eyes. I don't want to run from my feelings either. I'm scared of the constant separation, but I love Miles more than anything. I want forever with him.

I want him to see the evidence of our forever.

Here goes nothing. I press my lips together. "I have to show you something."

"Let me go first." He presses his palm into my lower back. "Okay?"

"This tour, it felt like we were traveling twenty hours a day. I had a lot of time to myself. Mostly, I thought about you. About us having a life together. About how much brighter my life is than it was before I met you. Used to be the only thing that soothed me was writing a song or stepping on stage. But you..." He stares back at me. "I know I promised to wait until you finished your first year of med school, but I have to do this now. I have to do it here." Miles lowers himself onto his knee.

He pulls a ring box from his jeans and flips it open. "Megara Smart, will you marry me?"

Meg's brown eyes go wide. Her fingers go to her soft, pink lips. She stares at me like she's in shock.

Usually, I know how to work an audience, but right now, I'm too nervous to have a clue. The sound of my heartbeat is drowning out my thoughts.

Is that
oh my God, yes?
or
oh hell, no
? I know she loves me, but she's young. School comes first. It should. I love how ambitious she is.

None of that makes waiting easier. I've done a lot in my life, had just about everything a guy could want. Nothing—not platinum albums, or Grammies, or ten thousand fans screaming my name—compares to Meg.

Her eyes soften. Surprise fades to joy. Her lip corners turn upward. "You're asking in front of your uncle."

I swallow hard. Fuck. I can't remember the last time I was speechless. A nod is all I can manage.

"That's sweet." Her smile spreads to her ears.

"He would have loved you."

"Really." He would have adored her. Especially the way she gives me shit. And the way she doesn't take my shit. And those gorgeous brown eyes of hers. That vibrant smile. The way she laughs with her entire body.

Where the hell do I start? "You make me better. Stronger."

My smile widens. Still, my stomach and chest are floating. Fucking nerves. Stage fright has nothing on marriage proposals.

"You're supposed to answer," I tease. "But I am willing to kneel here all afternoon."

"You can't kneel here all afternoon. I need you on your knees later."