Read Sing Fox to Me Online

Sing Fox to Me 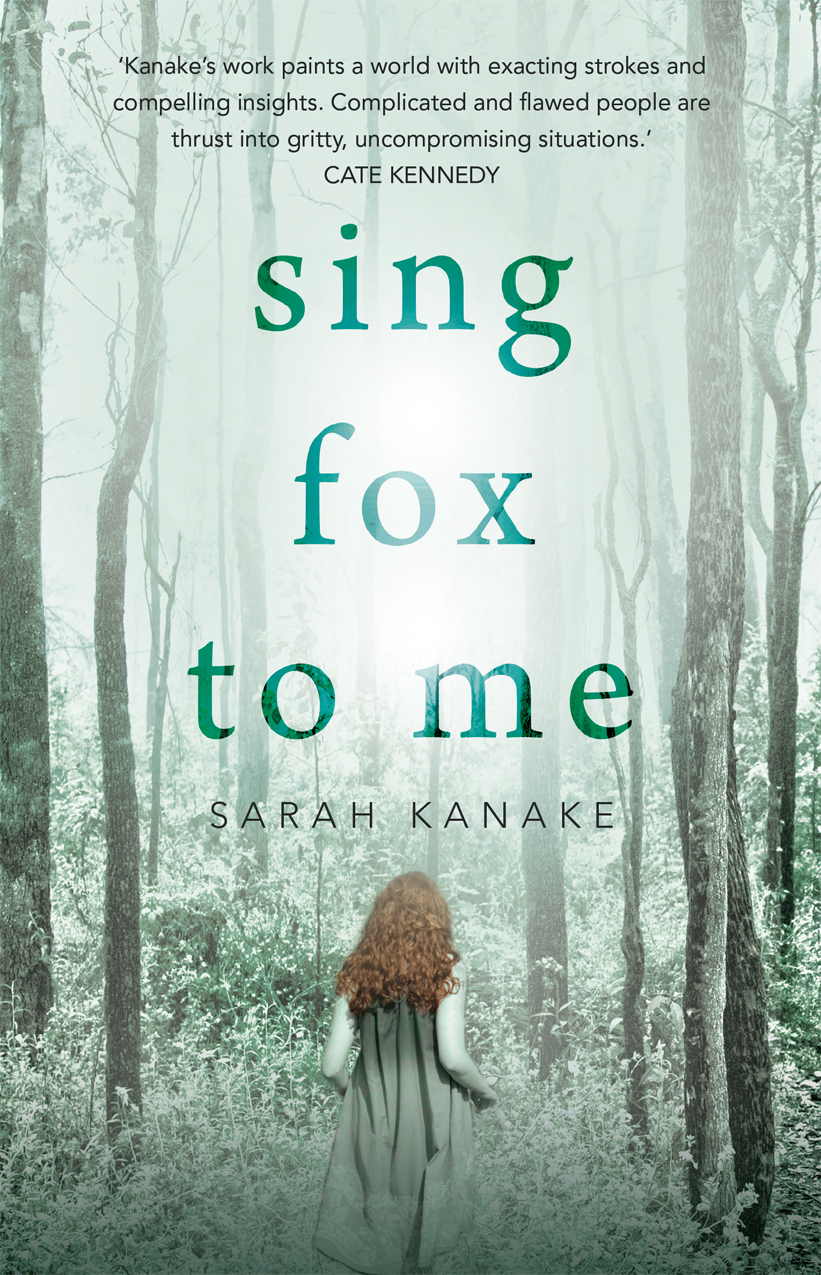 Published by Affirm Press in 2016

All rights reserved. No part of this publication may be reproduced without prior permission of the publisher.

All reasonable effort has been made to attribute copyright and credit. Any new information supplied will be included in subsequent editions.

National Library of Australia Cataloguing-in-Publication entry available for this title.

The author acknowledges the important cultural shift represented by the grammatical change from âDown's Syndrome' to the more contemporary âDown syndrome'; however, she has chosen to use the grammar commonly used in 1986 when this novel is set. 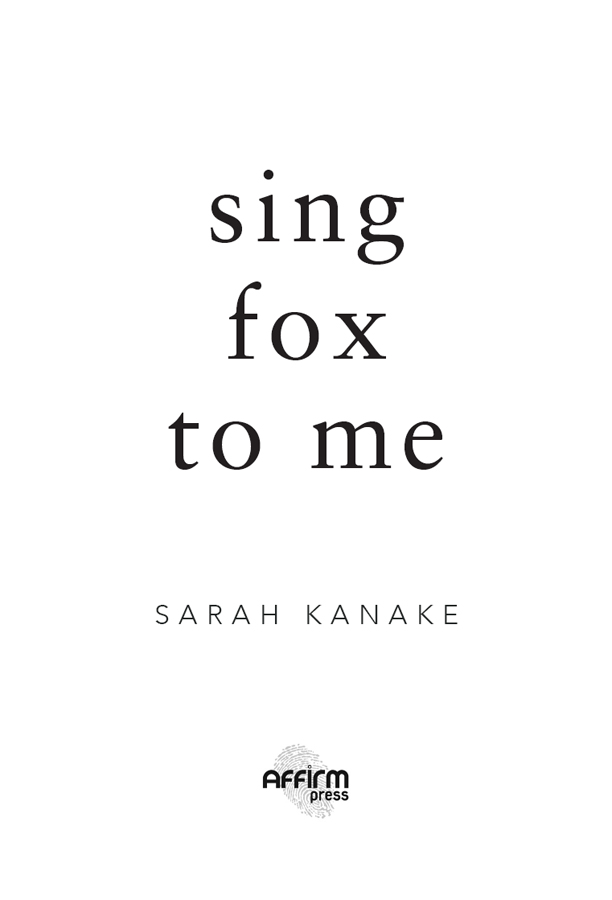 For Big Charlie and Little Charlie.
â¦ and for Olive, Bel Bel and Bear.

I sing
The Fox Came Out

On a Chilly Night

and Bobby, my favorite

Mongoloid sings Fox to me.

C
lancy Fox waited on the back verandah, his eyes fixed on a horizon just visible beyond the edge of his mountain. There'd been nothing but rain for days, and even though the sky had cleared over the morning, he knew in his gut that the worst was yet to come. Black clouds roiled through the sky, turning like bodies tangled up in bedsheets.

Clancy made his kids stay inside, even after the rain let up. He looked through the open door behind him, across the kitchen and into the living room. River was in her mum's armchair, biting her nails and staring out the window, a trapped animal. She wore a white nightie, and her red hair was loose around her shoulders. David sat by the fireplace with a stack of books, as if he was going to be there for days.

George was down the other end of the verandah having a durry. Clancy couldn't tell what his best mate was thinking â maybe he was feeling grateful that they were all far away from the rain and mudslides, thunder and black clouds. Or maybe George was thinking about when he'd be able to get down Clancy's mountain and fortify his shack for the worst of the storm still to come.

âThe eye, more like,' answered Clancy. âYou seen that?' He pointed beyond the drop-off.

George nodded. âMight be worth heading down now. Catch a bit of calm while we have it.'

George's hand shook, slightly, as he finished what was left of his durry.

Clancy walked back inside and told the kids he was leaving to check on the shack. River didn't want to stay. âNo, Dad.' She tugged his shirt with her damp, nail-bitten hand. âI can help. I
can
.'

He didn't respond to her. Instead he spoke to his son. âKeep an eye on your sister.'

David nodded without looking up from his book.

Clancy and George dressed for the weather. Akubras, Blundstones, boot covers and riding coats. They took the ute, but Clancy drove slower than usual because the mountain drive was sheer and he'd seen the power of an angry mudslide.

âMight not be much there,' he said gently, as they crept down the road.

âAnything is worth saving,' said George.

They reached the walking track that led in from the road to George's place. Clancy turned the ute off the road, and they went the rest of the way on foot. While they were walking, the rain started back up.

By the time they got to the shack, it was gone.

The roof was in the creek, and the structure itself had toppled sideways. A broken tree had pierced through one window and out another as if the shack were a harpooned whale. It took them most of the afternoon to find what was left of George's belongings, carry them up to the road, load them into the ute and bring it all back to the main house. George didn't say much as they unloaded his life from the sodden ute tray and spread it across the concrete floor of Clancy's shed.

They were just lifting George's small kitchen table out of the tray when Clancy heard the front door of the house open.

Clancy walked around the fence to the front of the house. The gate was open. He crossed the lawn and walked inside. His son was waiting right inside the door. David's face was pale, and he held his arm as though it was about to spring away from him.

David nodded. âShe ran out,' he said, and his eyes darted to the door.

David released his forearm for a moment to reveal a deep, angry bite mark in the skin just below the inside of his elbow. Bloody but not bleeding. âSaid she would sick the tigers on me, Dad.'

âWhy'd she bite you?' asked Clancy, panic rising inside him like rain in the water tanks out back. âWhat did you do?'

Clancy grabbed his son by the shoulders. He dug his fingers in, the way his own da would've done.

This time Clancy shook him. âBullshit.'

Clancy didn't feel his hands move, but he saw them wrap around David's thin, pale neck. He watched his hands shake his son harder â he watched them take control of the boy's breath, and George's large brown hands pull them away. âLet him loose, mate. Let him loose.'

Clancy's hands let go. His son slid to the ground.

George gathered the boy up in his arms, and David, who was almost sixteen, looked like a toddler again. âBreathe.' George wrapped his own hand around David's bite wound. âTake it easy.'

Clancy left his blubbering son in the arms of his friend, embarrassed by the intimacy between them, and went to find River.

Outside, a thin trail of bare footprints led from the door to the bush. He followed them. Rain lashed the ground. The wind picked up. His Blundstones sank into the mud. He struggled to get them back out again and soon gave up. Clancy followed River in bare feet.

Hail broke from the sky with a crack. He plunged beneath the sound. The mountain shook as if in response.

âRiver,' he shouted, but the wind was louder and cut his voice to shreds before it could reach her. How could a girl survive all alone in the scrub and rain when she was only just fourteen? Where would she go? âRiver â¦' The rain pounded harder into the earth. âRiver Snow Fox!' he called again, but his voice was only another drop of rain in the thunderous din.

Clancy tried to steady his body on a nearby tree. He missed and slumped to the ground. Mud soaked through his jeans. He was just like everything else on the mountain. A falling rock, a broken tree trunk. A new wound in the side of an old body. He was the severed root and the thundering mudslide. He was the buried footprint of a girl and the cavernous mouth that had swallowed her whole.

Somewhere in the rain and mud and crashing trees, he heard a laugh, faint and far away. River? He tried to call for her, but her name was heavy and his lungs were buried beneath the tree. The laugh sounded again. Kookaburras. This time, Clancy knew River was lost. The laughter turned to cackling as the kookas gathered in the branches overhead.

The rain fell over him like broken glass. He closed his eyes.

Then the rain stopped.

There was George, surrounded by a white mist of rain and sleet. âEasy, mate,' he said. âWe'll get this load off you.' The brim of his Akubra protected them both.