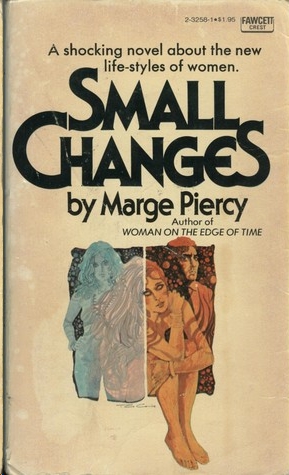 “Reading a book by Marge Piercy is like sitting around a warm inviting fire with old friends: you know you will be entertained, hopefully you will be amused, and if you dare to invest yourself, you will certainly learn something.”

“It is part of Miss Piercy’s charm that she never provides elaborate literary flourishes to describe basic human behavior. Her characters may be terrorists or cookbook writers, but they are the salt of the earth.”

“Marge Piercy’s novel is one of the first to explore the variety of life-styles that women in our time are adopting in order to give meaning to their personal and political lives. The novel depicts a new reality … the chaos and confusion women have faced … the courage and strength many of them have found.”

DANCE THE EAGLE TO SLEEP
*

WOMAN ON THE EDGE OF TIME
*

THE HIGH COST OF LIVING
*

TO BE OF USE

LIVING IN THE OPEN

THE MOON IS ALWAYS FEMALE

CIRCLES ON THE WATER: SELECTED POEMS

PARTI-COLORED BLOCKS FOR A QUILT (
Poets on Poetry
Series
)

All rights reserved under International and Pan-American Copyright Conventions, including the right to reproduce this book or portions thereof in any form. Published in the United States by Ballantine Books, a division of Random House, Inc., New York, and simultaneously in Canada by Random House of Canada Limited, Toronto.

All the characters in this book are fictitious, and any resemblance to actual persons living or dead is purely coincidental.

This edition published by arrangement with Doubleday and Company, Inc.

“The Happiest Day of a Woman’s Life” was first printed in
Works in Progress VII.
“Marriage Is a Matter of Give and Take” appeared in The Boston
Phoenix.
“Mothers and Daughters” and “The Rhythms of Two Households” were published in
Aphra
, Summer 1973, Vol. IV, No. 3.

1 The Happiest Day of a Woman’s Life

2 Marriage Is a Matter of Give and Take

3 Welcome to the Sexual Revolution

4 Come Live with Me and Be My Love

7 Is Sex More Fun Than Pinochle?

9 To Each According to Her Need

10 Just off the Freedom Trail (Phil)

12 Love Is a Woman’s Whole Existence

13 Stills from a Year

14 You Got to Feel It Spontaneously

15 The Champion versus the Hustler

18 That Which God Has Joined

19 A Little Strange and a Little Familiar

20 The Rhythms of Two Households

22 In the Fullness of Time

23 Motherhood Is a Woman’s Creativity

24 Out of the Closet and into the Frying Pan

26 Mohammed Comes to the Mountain and Finds It Stone

28 Caught in the Net

30 Plot of the Wild Chicken Breaking Through

ONE
The Book of Beth

The Happiest Day of a Woman’s Life

Beth was looking in the mirror of her mother’s vanity. The mirror had wings that opened and shut. When she was little she used to like to pull them together around her into a cave of mirrors with only a slit of light. It isn’t me, isn’t me. Well, who else would it be, stupid? Isn’t anyone except Bride: a dress wearing a girl.

Beth could not help seeing herself in the mirror: could never call up a glamorous image as her younger sister Nancy could. Nancy was sulking in the bathroom because her best friend Trudy had called her a dishwater blond. Like Beth, Nancy had naturally curly, almost kinky light brown hair. They were the little ones in the family. Just yesterday she had picked off the floor a piece of paper with gum stuck in it written in Nancy’s fancy new backhand:
Nancy Phail is a petite vivacious blond with loads of personality.
Nancy could look in the same mirror and see faces from those teen-age magazines she brooded over. But Beth saw Beth lost in a vast dress. She felt like a wedding cake: they would come and slice her and take her home in white boxes to sleep on under their pillows.

With their married sister Marie’s help, Nancy had written a description for the paper and mailed it in, though they never printed that except for people like, oh, executives’ daughters from the G.E. plant where her father worked at the gate. “Schifili embroidery and ribbons dip softly over an organza skirt and bodice, with sheer daintily puffed sleeves,” Nancy had written. “The train comes away.” That meant the thing that dragged could be taken off, with a little timely help.

“What are you frowning for? Mooning around, just as if it was any Saturday. Now let your sister Marie use the mirror, don’t be standing there making faces.” Her mother clucked
and nudged and peered at her with that familiar worried look. “Oh, if you aren’t covered with freckles the size of pennies!”

Jim and she had gone to Verona Beach on Lake Oneida last Sunday and now she was freckled on her face and hands and arms and even her back, though nobody could see through the yards of white fencing. Only her thin arms and hair stuck out, her hair not anything like its fluffy silly self but turned into a stiff coiled mass that smelled chemical and had sitting on it pearls and lace and imitation flowers rising from what looked like the doilies her Grandma Phail used to keep pinned to the arms of her overstuffed mohair couch.

Everything was to be pink and white. Her mother, nudging her from the mirror, was wearing a rustly old rose dress that was too tight. It was left from Marie’s wedding, but Mother said nobody would remember what she wore four years ago—though it was clear she had put on weight. Marie’s dress was in a color called cerise and she was matron of honor. Marie was one of the big Phails, like Dad and their brother Dick, big-boned and now filled out wide in the hips to balance her shoulders. Nancy was bridesmaid in pale pink and so was Beth’s girl friend Dolores in a dress the color of salmon from a can. There had been some fussing because Dolores was Catholic, but Beth insisted on her. It was the only thing she had insisted on. Dolores and Beth were not as close any more, both spending so much time with their boy friends and both having to work after school their senior year, but there had been many times—especially in junior high school—when Beth felt nobody in the whole world cared for her except Dolores.

Dolores had not liked the dresses that Marie and Nancy picked out, and they had fought for a whole week. Dolores had ended up taking hers home to let out the bodice, which meant she made it come out lower so her breasts showed some. She always said, if you had it you might as well flaunt it. Salmon was not Dolores’ best color, but she looked more definite than anybody else. Dolores had taken over from Mother to work on Marie’s hair, all the while flirting with herself in the mirror over Marie’s broad shoulders. She made Beth smile for the first time since waking up.

Why did Marie look strange? Beth realized she had not seen her dressed up since—when? Her own wedding? Mrs. MacRae’s funeral? Marie had lived upstairs since Mrs. MacRae
died and poor Mr. MacRae moved to his sister’s house. Gene had been out of work, long, too long. They had lost their house. Marie’s baby Lucille had been put down on the bed, where the everyday clothes people had worn over were piled. Lucille was spitting up on the cotton dresses and pants. Joey was out in the yard with Dick’s kids dressed up in their little suits and the last time she had seen them they were rolling in the grass playing Indians.

Nancy flung out of the bathroom. “Look at me! I’m a wreck! My hair didn’t come out right. And how can I wear such stupid clunky earrings?” Nancy and Dolores were jockeying at the three-sided mirror. At the window she started to look out but Marie yanked her back. “It’s bad luck to be seen on your wedding day.”

“You could just wrap me like a package.” To give her away. It was funny how they celebrated her going off with Jim, when for a long time Mother had not let her see him and she had used to meet him secretly after work. His brother raced stock cars and Jimbo liked to hang around the cars and her mother thought he had a bad reputation. Last month her mother had been worried and kept shaking her head and saying, “If this is what you really want.” Of course she wanted to marry Jim. She could hardly believe that she was really his girl. From one day to the next, she was always scared of losing him.

Weddings and funerals. All through Beth’s childhood Mrs. MacRae had lived upstairs. She was plump, with flesh like mashed potatoes, put on make-up at home in the evenings and did not wear housedresses like Mother and now Marie did. She had a pink naked-looking dog Honeybun. Her mother had told Marie that Mrs. MacRae wasn’t really a woman, for she had had her organs removed. That was why she didn’t have children like everybody else. The MacRaes had a little more money than their neighbors, and Mrs. MacRae was always inviting the other women in for Pot and Pan Parties. She would have games and demonstrate products and give door prizes and they would buy pans. Mrs. MacRae also gave parties for cosmetics and wigs and shoes. Those were the only times women in the neighborhood got together. Beth had loved to tag along. Her mother had bottles of apricot throat cream in the hall closet she would never remember until
they dried up. But an imitation party was better than no party at all.

Spin Devil by Red Garnier
The Seventh Candidate by Howard Waldman
Virtually Mine: a love story by Susan Rohrer
Last Ride by Laura Langston
The Trouble with Valentine’s by Kelly Hunter
Just A Kiss: (The Frog Prince) (Tangled Tales Series Book 2) by Rose, Elizabeth
Neverwylde (The Rim of the World Book 4) by Linda Mooney
Precious and the Mystery of the Missing Lion: A New Case for Precious Ramotswe by McCall Smith, Alexander
The Beast and the Homecoming Queen by Jackson, Khelsey
Sins of a Bad Boy (The Original Bad Boys Book 1) by Naomi, Soraya
Our partner