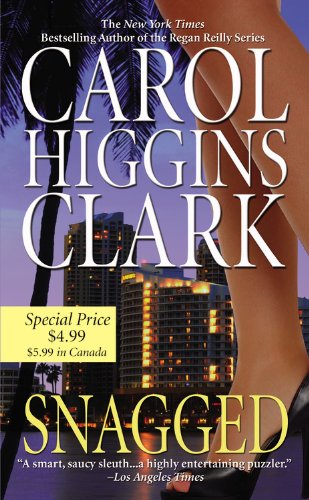 This book is a work of fiction. Names, characters, places, andincidents are the product of the author’s imagination or are usedfictitiously. Any resemblance to actual events, locales, or persons,living or dead, is coincidental.

Visit our Web site at
www.HachetteBookGroupUSA.com

PRAISE FOR CAROL HIGGINS CLARK AND

“Should delight fans of whimsical whodunits.”

“Breezy and humorous . . . Snagged offers a runon fun and entertainment.”

“Carol Higgins Clark has created some delightful characters—highly individualistic, yet down toearth—who frolic through her well-crafted stories,creating humor and satisfying reading in the midstof mystery and mayhem.”

“Suchfun. . .Clark writes with skill and humor. . .there’s much to like in this tale.”

“A snappy murder mystery . . . Clark proves herself a nimble and entertaining writer.”

“There’s something for all ages in this mystery—from young Regan to the delightful elderly . . . another fast-moving mystery from super-sleuthRegan Reilly.”

“A refreshing style. . .With humor and wit, almost with a tongue-in-cheek attitude, the author developsunusual characters and a suspenseful story.”

He Sees You When You’re Sleeping

For my siblings and sibling-in-law, Marilyn, Warren and Sharon, David, and Patty,with love.

Regan Reilly would like to thank the following people for assisting in her birth: Michael Viner, Nanscy Neiman, Larry Kirshbaum, Maureen Mahon Egen, Eugene Winick, and Lisl Cade. She is also grateful to the author’s mother, Mary Higgins Clark, for introducing her daughter to a life of crime!

Ride on! Rough-shod if need be, smooth-shod if that will do, but ride on! Ride on over all obstacles,and win the race!

R
ICHIE BLOSSOM TUMBLED from the side of his bed as he bent over in an awkward attempt to pull on his brand-new pair of panty hose. “Birdie,” he exclaimed, smacking a kiss in the direction of the enlarged Kodak of his late wife, snapped at their last picnic in the backyard, “I wish you were the one wiggling into these.” His writhing contortions matted down the flecked, gold-and-sea-green shag rug that had been bought in celebration of their forty-fifth wedding anniversary.

“Yahoo,” he yelled to his reflection in the mirror on the closet door as he kicked his heels in the air, “even the nails of the Wicked Witch couldn’t put a run in these babies.” Like a June Taylor dancer, he splayed his legs, then brought them together, practicing the scissor motion that had become so popular in aerobics classes, as he admired his satiny gams. “Not a run, not even a snag,” he muttered enthusiastically. He grabbed the material around his right foot and pulled hard, knowing that the callus on his heel would normally be rough enough to split wood. He let go of the luxurious fabric bunched in his hand, started to sit up, and then, for good measure, gave it one more yank before bending his leg and pulling it close for further examination. “There isn’t a mark,” he whispered.

He looked around anxiously, as though someone could hear him. The run-proof, snag-proof, callus-proof panty hose was his invention. The realization of the dream he had had when Birdie, short for Bird Legs, had never been able to find hose that didn’t blow in the wind around her matchstick ankles. She had tugged and yanked at them so much that no pair ever lasted more than one round of miniature golf.

“Birdie, Birdie, Birdie,” he sighed happily, gazing at the picture that unfortunately had been clicked just as Birdie was about to yell at him to hurry up. It was the last picture on the roll, so no retake had been possible. Birdie’s unexpected demise in her sleep that night meant that Kodak was out a sale and her panty-hose troubles were laid to rest. “But I’ve created this masterpiece in your memory, my little buttercup. Women will be able to buy it in any color, and each pair will last for years. Who in the world could have any objection to that?”

Maybe it was the way the sun slanted through the thick Miami air and reflected off Birdie’s scrunched-up nose in the picture frame, but one thing was for sure. Birdie looked worried.

T
HE ROAR AND vibrations of the 747’s engines underneath Regan Reilly’s feet were no match for the snap, crackle and popping of her neighbor’s gum. For hours she had tried to ignore it as they crossed the country, but the wad of Bazooka in her seatmate’s mouth was continually being replaced with the next stick in an economy pack. The only respite was during the doll-sized “meal,” which Regan picked at before abandoning the miniature fork, deciding that the dollop on her tray, grandly termed lasagna al forno, bore an uncomfortable resemblance to mystery meals she had endured in college.

Regan pushed the button to ease her seat back, hearing the annoyed sigh of the person sitting behind her, and closed her eyes. She bolted upright seconds later when the first bubble from a fresh piece of gum was enthusiastically decimated by her seatmate, who was now buried in a tabloid whose headline warned of UFOs bearing pregnant skeletons landing at Euro Disney. Where’s Miss Manners when you need her? Regan thought. Probably riding in first class.

Feeling her body twitch as another bubble lost its fight for survival, Regan leaned forward and pulled her copy of
USA Today
out of the seat pocket in front of her. For some reason she always loved to read this newspaper on airplanes, checking out the weather map for the conditions of the cities all over the country, and especially the ones they were passing thirty thousand feet below. Not exactly like traveling in a wagon train, with the wind blowing off your bonnet, but with a little imagination one could conjure up a nasty day in Butte, Montana, or dismal skies, not too promising, in Chicago. But one thing Regan could never understand was why the captain would get hold of the microphone and interrupt the in-flight movie to announce that the speck below was the Grand Canyon. Oh, great. Let’s all raise our window shades and make the actors on the screen a bunch of shadows and the people who paid their four bucks for the headsets a bunch of squinters yelling, “Pull down the shades!”

Once again Regan read the prediction for her destination—Miami, Florida. Muggy and hot. No surprise there. Regan, who had inherited the pale skin, blue eyes and dark hair of her Irish forebears, was not a sun worshiper, but she loved a swim in the ocean.

A thirty-year-old private investigator from Los Angeles, Regan Reilly was coming to Miami to be a bridesmaid for the ninth time. This occasion was the nuptials of her childhood friend Maura Durkin. Maura’s father, Ed, had worked for Regan’s father, Luke, in his first funeral home in Summit, New Jersey, then decided to open his own place in Miami, where business was always good. The families had remained close and Regan’s parents and Maura’s parents always saw each other at the annual funeral convention, which, not so coincidentally, was being held in Miami this weekend.

“You know old Ed,” Maura had told Regan. “He wants all his friends from the biz at the wedding, and what better time to schedule it than when they’re all going to be down here anyway. Besides,” she added, “I think he’s getting a break on the flowers from a floral exhibitor at the convention.”

“I imagine there are a few sample guest books floating around you could grab too,” Regan replied, “not to mention limousines, cosmetologists who can do your makeup, hair . . .”

The Irish Devil by Diane Whiteside
When the Glitter Fades (Cowboys of Whispering Winds) by Renee Peterson
Taken - A Gangster Stepbrother Romance by Adams, Michaela
Iron Hearted Violet by Kelly Barnhill
The Evil Within - A Top Murder Squad Detective Reveals The Chilling True Stories of The World's Most Notorious Killers by Trevor Marriott
The Christmas Bus by Melody Carlson
Anonymous Venetian by Donna Leon
Loving Lucas by Violetta Rand
Timberwolf Revenge by Sigmund Brouwer
A Boy and His Dragon by Cooper, R.
Our partner