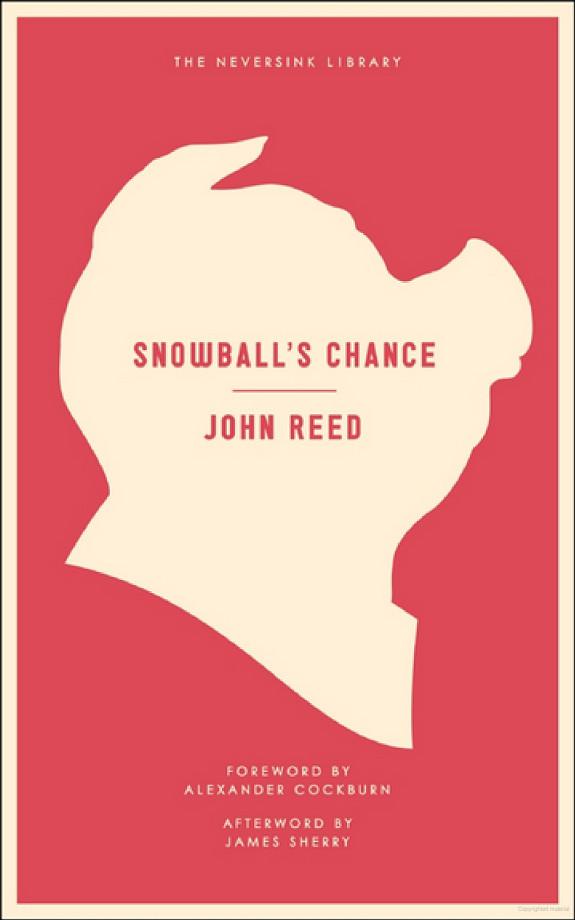 “While reading
Snowball’s Chance
, one plays this terrifying guessing game of animal á clef: which animal am I? Which animal is my neighbor? Which animal is my enemy? Written in lucid, wise, funny, fable-prose, this book brings to mind Spiegelman’s
Maus—
the use of a playful metaphor to reveal truths we might otherwise refuse to see.”

“A writer of great promise.”

“A pig returns to the farm, thumbing his snout at Orwell … the world had a new evil to deal with, and it was not communism … The estate of George Orwell is not happy about it.”

“[Reed] not only shanghais Orwell’s story, but amps up and mocks the writer’s famously flat, didactic style—that fairytailish simplicity that has ensured
Animal Farm
a place in high school English classes for the last 50 years.”

“Reed is an extraordinary talent.”

“Reed has managed to take a dated masterpiece … and revive it for the odd, casino-like social and political world we’re mired in today; in the process he’s created his own masterpiece.”

“John Reed excels in the realm of the strange.”

“Reed’s tale, crafted amid ground zero’s dust, is chilling in its clarity and inspired in its skewering of Orwell’s stilted style. Whether you liked or loathed the original, there’s no denying Reed has captured the state of the farm today.”

“Eerie in its timeliness.”

“A caustically brilliant satire … as brainy as it is base, destructive as it is innovative and sweeping as it is sophisticated.”

JOHN REED
was born in 1969 in New York City and raised in the vacant Tribeca of the late 1970s and early 80s. He studied fiction at Columbia University, earning a Fellowship of Citation. On September 13, 2001, the windows and vents of his downtown apartment taped up to prevent the dust from the World Trade Center from seeping in, Reed had a revelation: Snowball returns to the farm to introduce capitalism. In a whirlwind three weeks, Reed drafted
Snowball’s Chance
, a novel that would spark a literary debate about parody and canonical writing, fuel an ongoing conflagration about George Orwell and his late-life involvement with Mccarthy-esque investigations of British communists, and hold a place on the SPD “Small Press” bestseller list for the next decade. His other books include the novels
A Still Small Voice
and
The Whole
, a play,
All the World’s a Grave
, and the non-fiction
Tales of Woe
. He has also developed original, award-winning programming for MTV and other networks. He is a member of the board of directors of the National Book Critics Circle and a senior editor at
The Brooklyn Rail
.

ALEXANDER COCKBURN
,
The Nation’
s “Beat the Devil” columnist and one of America’s best-known radical journalists, was born in Scotland and grew up in Ireland. He is co-editor, with Jeffrey St Clair, of
CounterPunch
and the author of many books.

JAMES SHERRY
is the author of ten books of poetry and prose and founder of the Segue Foundation, a multi-arts publishing and presenting organization that has made a deep impact on downtown Manhattan culture, and Roof Books, which first published
Snowball’s Chance
.

I was by no means the only reader of books on board the
Neversink.
Several other sailors were diligent readers, though their studies did not lie in the way of belles-lettres. Their favourite authors were such as you may find at the book-stalls around Fulton Market; they were slightly physiological in their nature. My book experiences on board of the frigate proved an example of a fact which every book-lover must have experienced before me, namely, that though public libraries have an imposing air, and doubtless contain invaluable volumes, yet, somehow, the books that prove most agreeable, grateful, and companionable, are those we pick up by chance here and there; those which seem put into our hands by Providence; those which pretend to little, but abound in much
.
—HERMAN MELVILLE,
WHITE JACKET

First published in 2002 by Roof Books, part of the Segue Foundation

Foreword: The Fable of the Weasel

FOREWORD
THE FABLE OF THE WEASEL
BY ALEXANDER COCKBURN

Snowball’s Chance
takes its intriguing departure from
Animal Farm
, and set me thinking again about Orwell. These days I can’t get through almost any page of Orwell without a shudder, though in my teens I often had the Penguin selection of his essays in my pocket. I’d learned to loathe
Animal Farm
earlier at my prep school, Heatherdown, where any arguments for socialism would be met with brays of “and some are more equal than others” by my school mates.

Some writers admired in adolescence stay around for the rest of the journey, perennial sources of refreshment and uplift: P.G. Wodehouse, Stanley Weyman, H.L. Mencken, Flann O’Brien, to name but four I’d be glad to find in any bathroom. Now, why can Mencken delight me still, while the mere sight of a page of Orwell carries me back to memories of England and of British-ness at full disagreeable stretch: philistine, vulgar, thuggish, flag-wagging?

Maybe the answer comes with the flag-wagging. Mencken made terrible errors of political judgement. Like Orwell he could be a lout. Both men’s prose has
excited awful imitators. But Mencken was a true outsider. Orwell wasn’t. To step into Mencken-land is to be lured down a thousand unexpected pathways, with firecrackers of wit exploding under one’s feet. Contradicting Thomas Love Peacock’s famous jibe at landscapers, even on the twentieth tour of the Mencken estate there are surprises. I don’t feel that, trundling through Orwell Country. It gets less alluring with each visit. What once seemed bracing, now sounds boorish. How quickly one learns to loathe the affectations of plain bluntishness. The man of conscience turns out to be a whiner, and of course a snitch, an informer to the secret police, Animal Farm’s resident weasel.

When Orwell’s secret denunciations surfaced a few years ago, there was a medium-level commotion. Then, with the publication of Peter Davison’s maniacally complete twenty-volume collected Orwell, the topic of Orwell as government snitch flared again, with more lissome apologies for St. George from the liberal/left and bellows of applause from cold warriors, taking the line that if Orwell, great hero of the non-Communist left, named names, then that provides moral cover for all the Namers of Names who came after him.

Those on the non-Com left rushed to shore up St. George’s reputation. Some emphasized Orwell’s personal feeling toward Kirwan. The guy was in love. Others argued that Orwell was near death’s door, traditionally a time for confessionals. Others insisted that Orwell didn’t really name names, and anyway (this was the late Ian Hamilton in the
London Review of Books
), “he was forever making lists,”—a fishing log—a log of how many eggs his hens laid; so why not a snitch list?

“Orwell named no names and disclosed no identities,” proclaimed Christopher Hitchens, one of Orwell’s most ecstatic admirers. Clearly, Orwell did both, as in “Parker, Ralph. Underground member and close FT [fellow traveler?] Stayed on in Moscow. Probably careerist.”

Apologists for Orwell sometimes suggest this was a sort of parlor game between Rees and Orwell, playful scribbles that somehow ended up with Kirwan. The facts are otherwise. Orwell carefully and secretly remitted to Celia Kirwan, an agent of the IRD or Information Research Department, a list of the names of persons on the left who he deemed security risks, as Communists or fellow travelers. The IRD was lodged in the British Foreign Office but in fact over-seen by the Secret Intelligence Service, otherwise known as MI6.

Kirwan, with whom Orwell had previously had some sort of liaison, visited Orwell in Cranham on March 29, 1949. She reported to the Department the next day that she “had discussed some aspects of our work with him in great confidence, and he was delighted to learn of them.” Case Officer Lt. Colonel Sheridan annotated this report.

El Héroe de las Eras by Brandon Sanderson
Stuck in the Middle by Virginia Smith
Lily Lang by The Last Time We Met
The Unseen by Hines
The Story Shell: A Tale of Friendship Bog by Gloria Repp, Tim Davis
Distant Choices by Brenda Jagger
Forty Candles by Virginia Nelson
Countdown to Terror by Franklin W. Dixon
A Dismal Thing To Do by Charlotte MacLeod
Wolf's Vengeance (After the Crash) by Barone, Maddy
Our partner