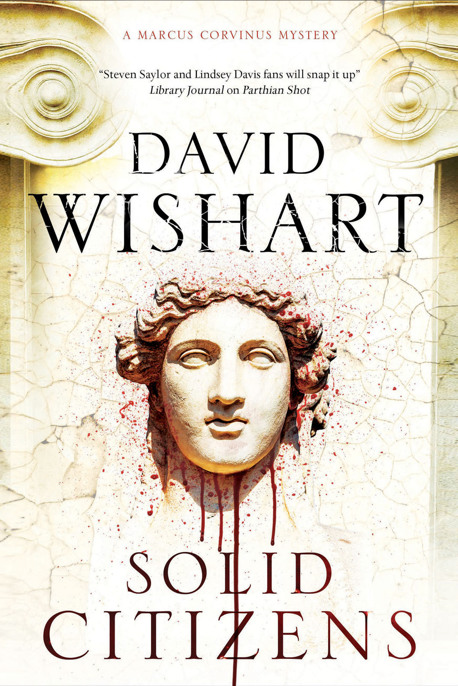 Previous Titles in the Marcus Corvinus series by David Wishart

Previous Titles in the Marcus Corvinus series by David Wishart

A VOTE FOR MURDER

FOOD FOR THE FISHES

IN AT THE DEATH

NO CAUSE FOR CONCERN

First published in Great Britain and the USA 2013 by

The right of David Wishart to be identified as the author of this work has been asserted in accordance with the Copyright, Designs & Patents Act 1988.

Only the names of characters appearing or referred to more than once are given.

Manlius, Marcus: one of the current aediles

The story is set during the first half of December AD39.

Oh yeah, sure, it can be a complete pain in the rectum, and it’s really a time for the bought help. Still, there isn’t much to beat the simple pleasure of coming downstairs on that first Winter Festival morning, particularly if it’s cold and crisp and early, and seeing them all lined up waiting for their candles and dolls and little packets of holiday money, their innocent faces bright with the prospect of a whole five days’ skiving off work, rubbishing the master, stuffing themselves until they’re sick with rich food in the best dining room and generally behaving like a pig’s backside with total impunity. Or at least technically: any slave stupid enough to go over the top by, say, pissing in the ornamental pool or trying it on with the mistress in the linen cupboard deserves all he gets – even if he can’t be given it until after the party’s over for another year. Rome might let her hair down on occasion, but you don’t mess with her.

So there we were, in the lead-up to the Winter Festival, tucked away in the Alban Hills, visiting our adopted daughter Marilla and her new husband Clarus at what had been, the year before, Perilla’s Aunt Marcia’s villa outside Castrimoenium. Me, I’m a city boy, myself, but Castrimoenium – or the villa, rather – is special. Courtesy aunt or not (she and Perilla weren’t directly related), Marcia and her husband Fabius Maximus had been practically the only family she’d had, and when Maximus died just before the Ovid business that first brought me and the lady together, Marcia had sold up and moved out of Rome, to what until now had been a holiday property. Since we’d been married, Perilla and I had been coming through to stay pretty regularly, at least once or twice a year. For all she was a damn-your-eyes straight-down-the-line old-style blue-blooded aristocrat I’d had a lot of respect for old Marcia. Then Marilla had appeared and almost immediately moved in for keeps. It’d suited them both: Marcia had no family herself, at least none living, while Marilla with her penchant for collecting lame-duck animals – particularly the bloody-minded, eccentric or just plain weird ones – had never been happy in Rome. Besides, the city had painful memories. Then there was Clarus, the local doctor’s son, and that was that. When Marcia had died she’d left them the villa – lock, stock and menagerie.

Mind you, it wasn’t all sweetness and light. We were expecting Mother and her older-than-time-itself husband Priscus, the antiquarian’s antiquarian, in a few days. Fortunately, she’d be leaving her serial-poisoner chef Phormio behind in Rome, just as we’d left Meton. Not Bathyllus, though: he’d always had a soft spot for Marilla, and I couldn’t do that to the little guy, not at Winter Festival time. Meton, now … well, Meton was different; being in Castrimoenium did something to his already-warped brain. After the business with Dassa the oenophilic sheep and his more recent celebrity chef scam, I wasn’t risking letting that scheming bastard anywhere near the place.

It had been a quiet morning, for me, at least, which suited me fine. Perilla and Marilla were out with the hellhound Placida, terrorizing the local wild boar population plus any stray wolf silly enough to get in the way – or at least Placida was – while Clarus made his rounds: his father’s eyesight had deteriorated badly these past few months, and Clarus was gradually taking over the practice. I was stretched out on one of the atrium couches, with half a jug of more-than-decent Alban on the side table, and was just giving myself a top-up when Lupercus came in. Lupercus was Clarus and Marilla’s major-domo, the replacement for old Laertes who’d been given his freedom in Marcia’s will and had gone off to the fleshpots of Baiae to live with his sister. Not a bad lad, Lupercus, albeit – in the arch-conservative Bathyllus’s view, anyway – on the far-too-young and over-sassy side for the job. He and the little guy seemed to be getting along fine. Just about. If you could call pointedly ignoring each other’s existence getting along. Still, there’d been no blood spilled so far, which by my reckoning was a definite plus.

Taking Bathyllus aside just before we’d left home and warning him that I’d shove his feather duster where the sun didn’t shine if there were trouble might have helped, mind. Never discount the power of intimidation.

‘The senator, sir. From Bovillae. He said to mention a connection with Quintus Libanius?’

Oh. Right. Fuzz-face Libanius I knew, the only non-Greek I’d ever met with a beard you could hide a badger in, and First Speaker of the Castrimoenian Senate. The last time I’d seen him he’d been trying not to throw up over a corpse.

He shrugged; something that, if Bathyllus had seen it, would’ve had the little guy tearing his hair. If he had any, that is, which he doesn’t. ‘I don’t know, sir. But he says it’s important.’

I sighed; there went the quiet morning. And I didn’t like the mention of Libanius much, either.

Lupercus did. Nerva was a little tubby guy impeccably dressed in a broad-striped mantle that looked like it’d come from one of the best shops in Rome. Which made sense, because the Silii are one of the top Roman families. Bovillan senator he might be, but I’d guess he was one of the honorary appointees, a local only by residence who’d been drafted in because he’d held office in Rome itself.

‘Ah, Corvinus, glad you could see me,’ he said. ‘Enjoying your holiday?’

‘It’s a little early for me, thank you.’ He lay down. ‘Do carry on yourself, though. Quintus Libanius sends his regards.’

I took a sip of the Alban. I was sorely puzzled: something was definitely not right here. Oh, sure, Bovillae’s only four or five miles away, the other side of the Appian Road, but you didn’t get one of their senators dropping in on an out-of-the-way villa just to pass the time with a visiting stranger, particularly a top-notcher from the very crest of the social tree like Silius Nerva. ‘So,’ I said. ‘What can I do for you?’

He cleared his throat. ‘It’s, ah, a little embarrassing.’

‘There is …’ He hesitated and began again. ‘Not to beat about the bush, my dear fellow, we in the Bovillan Senate are faced with what amounts to a rather unfortunate and sensitive problem at present. I happened to be, ah, discussing this over dinner with Libanius yesterday evening and he mentioned your name, plus the fact that you were currently visiting. He suggested that since you have a certain amount of experience in these matters it might be worth the senate’s while to contact you.’

Uh-oh. I was getting a very bad feeling about this. Men of Nerva’s standing and background are used to fixing you with their eye and telling you straight out what they want you to do for them. They don’t expect any arguments or backchat, either. What they
don’t
do is what Nerva was doing here: hum and haw and go round as many bloody houses as would make up a substantial city block in the process. Evidently a small nudge was called for or we wouldn’t cut to the chase this side of the festival.