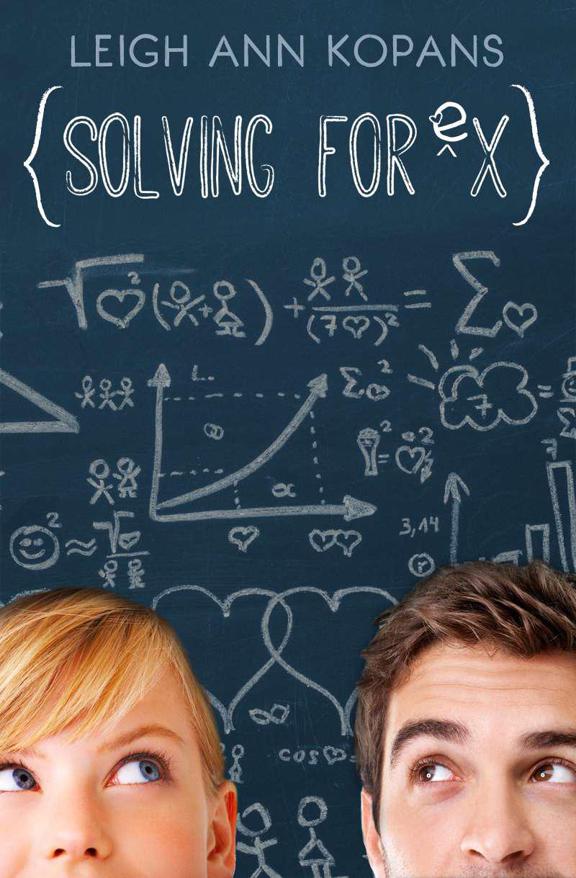 This book is a work of fiction. References to real people, events, establishments, organizations, or locations are intended only to provide a sense of authenticity, and are used fictitiously. All other characters, and all incidents and dialogue, are drawn from the author’s imagination and are not to be construed as real.

“Amazing! If you like Sarah Dessen you will LOVE this.”

~ Emma Pass, author of
Acid
and
The Fearless
(Random House)

“Putting a modern spin on a Jane Austen classic, Solving for Ex proves that brains can be sexier than brawn. In this complicated equation of high school drama, mean girls, mathletics, and romance, LeighAnn delivers yet another beautifully written young adult novel that authentically captures teenage emotions while also capturing the reader’s heart.”

and the upcoming
Falling from the Sky

“Ashley is the kind of girl you want to root for, smart and capable and self-assured, despite of, or maybe because of, her vulnerabilities. And in Brenden, LeighAnn has crafted a boy worth of such a girl. Through all the heartbreak and angst of high school, their connection is undeniable and pressing. It’s elementary, dear readers—Solving for Ex is one must-read romance.”

~ Jenny Kaczorowski, author of
The Art of Falling
(Bloomsbury 2013)

“If you only read one book in 2014, make sure it’s Solving For Ex! I sincerely doubt that you’d regret reading it; it’s intelligent, hilarious, intense and touching… Honestly one of the most amazing books I have ever read. “

For my daughters, who I hope, like Ashley, always make their best judgment their first consideration.

We have all a better guide in ourselves,

if we would attend to it,

than any other person can be.

the means of settling well

If every problem had as clear and quick an answer as those on the Mathletes exam, I would have been winning at life. Too bad things didn’t work like that, and Brendan, the guy I was hopelessly in love with, reminded me of the fact every day.

I could almost hear the smirk on his face from behind me on the rickety metal grated walkway at the top of Squirrel Hill’s water tower. “If a is less than b, and three squared plus four squared plus five squared plus twelve squared equals a squared plus b squared is satisfied by only one pair of positive integers, what is the value of a plus b?”

“Damn, Ashley. You didn’t even write that down.”

“Doesn’t count. You’ve been practicing, haven’t you? We swore we wouldn’t practice. Now you’ll be faster than me!”

“Not possible. And I haven’t been practicing. Not that much.” Only a couple of hours a day.

“I knew you were awesome, but man. That’s fast.”

My heart seriously skipped a beat.

I was in love with Brendan because he was Brendan, and I was me, and we were perfect for each other.

We weren’t together because I didn’t have the balls to tell him.

“Was there ever a question?” The truth was, wild horses couldn’t drag me back to my old school.

It was the last Saturday morning before classes started for the year at Mansfield Prep, and in Squirrel Hill, Pennsylvania, summer had overstayed its welcome. If I hadn’t known better, I would have sworn the fog was steam. It draped itself over the sleepy Pittsburgh district like a blanket, conforming to the curves and angles of every street lamp, late-summer rose, and porch swing. And whoever sat on them. Including me.

Even though I knew sitting up here would make the top layer of my freshly straightened hair frizz, I loved the feel of the warm wet air on my face. I loved the mountains pushing up all around the moat of rivers that cradled the city of Pittsburgh. I loved how the fog diffused even the harshest summer-morning sunshine and cast the glittering skyscraper windows in a magical mist.

It was a welcome change from the farming town of Williamson, where my parents lived. Where I’d lived, until eight months ago.

Brendan nudged his shoulder against mine. “So you finally learned to use that thing?”

“Yeah, I actually really like it. I’m glad your parents got you such an expensive and completely inappropriate gift for no particular reason.”

He laughed. “What’s new, right? And couldn’t we have looked at foggy trees a little closer to the house? Or a little later in the morning?”

I shook my head and jutted my chin out toward the landscape. “Carpe diem, and all that. Don’t tell me you don’t think this is gorgeous.” Brendan yawned loudly. “Okay, point taken,” I said. “I owe you, okay? What are you so exhausted for, anyway?”

“Late night. Mom was out with friends and I wanted to wait up for her.”

“Your dad out of town again?”

He shrugged, confirming it, but telling me it was no big deal. “I was messing with you. I know how important the sunrise is.”

He smiled that soft smile of his, the one that made the corners of his eyes crinkle in that way that melted my insides. That was the biggest hazard of hanging out with Brendan every Saturday morning. As if subjecting myself to pining for him every weekday at school wasn’t enough, I had to do this to myself on the weekend, too.

He slung his arm around my shoulders, catching my neck in the crook of his elbow, and pulled me to him. I was thankful that he was so tall, because my face tucked neatly into his shoulder and he couldn’t see the way my eyes fluttered shut as I breathed him in—shampoo and grapefruit and a little bit of aftershave. Summer or winter, indoors or out—my Brendan.

“I can’t believe you’re the first person to ever convince me to climb up here.”

I stared at him. “Don’t tell me you’ve never climbed the water tower.”

He gave a short laugh. “Don’t tell me I remind you of those delinquents who have nothing better to do on a Friday night.”

“Oh, please. It’s hardly breaking and entering. I just want to get some good shots. The sun’ll be up soon, and then I’ll have missed the foggy sunrise.” I shifted my weight to the side to wedge my foot beneath me for a steadier angled shot. The whole rickety walkway trembled, and Brendan grabbed my forearm, digging his fingers in. I was already sweating in the summer morning’s wet heat, but as soon as his skin touched mine, a whole new kind of heat ran through me.

“Trying to cuddle with me?” I attempted a laugh, but my voice just shook.

Brendan was deathly afraid of heights, which is why it was that much crazier that he was even up here with me. “Well, if you made it up here, I’d say you’re doing pretty well. A few more times and it’ll be a piece of cake.”

He stared out at the horizon while he caught his breath. “It’s your fault I’m even up here, anyway. Your aunt would kill me if I let anything happen to you.”

“True.” I metered, fired another test shot, and winced at the result.

“You’ve been making faces at that thing for five minutes now. Why don’t you put it on auto, get the shot, and we can get out of here? I’ll even buy you breakfast.”

“Hush,” I said, pressing my eye to the viewfinder again. “You’ll buy me breakfast anyway.” I fired another shot. Dammit. Still dark. I clicked into the data readout to check the settings there.

Something bony dug into my collarbone. I turned my head and almost ran my nose straight into Brendan’s—he’d rested his chin on my shoulder and was staring at the LCD. My heart stopped. His lips were so close to mine that one quick move would have them pressed together. And of course, I suddenly couldn’t move a muscle.

“How do you even read that?” he asked, jabbing his finger at the histogram, before he sat up and leaned back on his palms. I started to stammer a response, but he’d already stood up on shaky legs and reached a hand down to me. “C’mon, Ash. Let’s get out of here. I’m starving.”

I grabbed his hand and smiled back, telling myself it didn’t really matter what we talked about after a long summer apart. Hell, I was happy just to be hearing his voice. I’d been in touch with him a lot over the summer, but it was mostly through email. The camp where I worked for nine weeks every summer didn’t get cell phone service and I could only really email him a couple of times a week without looking like a stalker. Then, for the few weeks I was bored out of my mind back home, he was on some crazy European cruise with his family.

It sucked not being able to talk to him, especially since we’d seen each other every day since I’d first arrived in Squirrel Hill. I’d been sitting inside the house sniffling and sobbing for the past twenty-four hours, and it was clear that Aunt Kristin and Uncle Bruce didn’t really know what to do with me anymore. That January morning, I’d been sitting in the front yard, frigid though it was, and had kept right up with my crying. The tears rolled down my face like my eyes were fountains—they flowed out like they were a natural and permanent part of who I was. I wasn’t even really aware of them anymore.—Depression’ll do that to you. Everything was black and cold and stupid and hopeless and it was hard to tell how much of that was real or only inside my head.