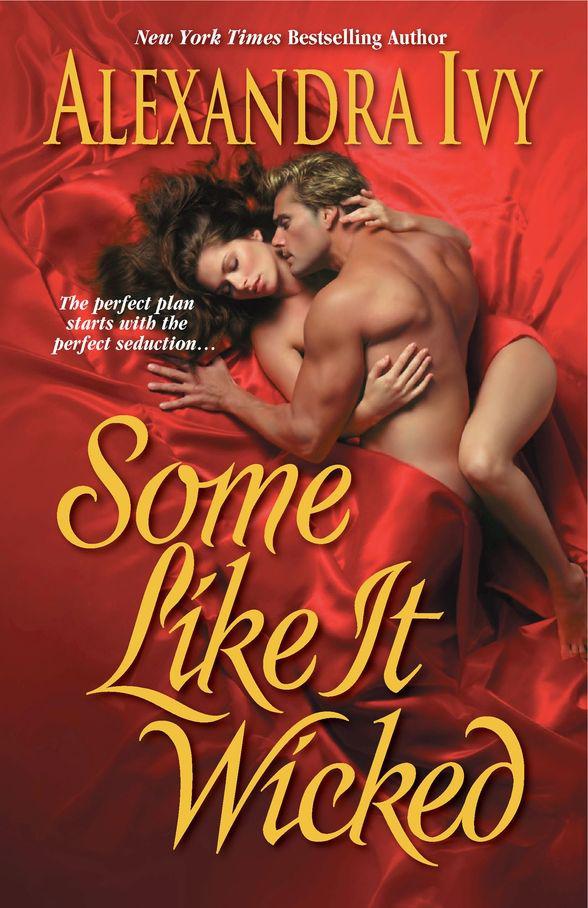 A DANGEROUS KISS
“If you shrink from me in terror, Miss Middleton, no one will believe we are conducting a flirtation.”
“You merely took me by surprise.”
“Stand, Miss Middleton.”
“Why?”
“There is no need in progressing any further if you cannot be depended upon to uphold your part of the charade.”
“I will do well enough, sir.”
“Oh?” he taunted softly. “Is that why you are cowering in that seat as if you fear I might ravish you at any moment?”
“I do not fear you.”
“Then stand.”
“Very well.” She thrust herself to her feet, relieved when her less-than-stable knees held her upright. “Are you satisfied?”
“Not nearly,” he murmured.
Keeping her gaze firmly ensnared, Hellion stepped forward to gently cup her face in his hands. With an odd fascination his thumb brushed her lower lip over and over until his head at last lowered and his intention became clear.
He was going to kiss her.
His lips were warm and shockingly possessive. With infinite patience, he explored the taste and shape of her mouth. Then, lightly his tongue stroked until her lips instinctively parted in invitation . . .
Books by Alexandra Ivy
Guardians of Eternity
WHEN DARKNESS COMES
EMBRACE THE DARKNESS
DARKNESS EVERLASTING
DARKNESS REVEALED
DARKNESS UNLEASHED
BEYOND THE DARKNESS
DEVOURED BY DARKNESS
BOUND BY DARKNESS
FEAR THE DARKNESS
DARKNESS AVENGED
HUNT THE DARKNESS
The Immortal Rogues
MY LORD VAMPIRE
MY LORD ETERNITY
MY LORD IMMORTALITY
The Sentinels
BORN IN BLOOD
Historical Romance
SOME LIKE IT WICKED
SOME LIKE IT SINFUL
SOME LIKE IT BRAZEN
And don’t miss these Guardians of Eternity novellas
TAKEN BY DARKNESS in YOURS FOR ETERNITY
DARKNESS ETERNAL in SUPERNATURAL
WHERE DARKNESS LIVES in THE REAL
WEREWIVES OF VAMPIRE COUNTY
And look for this Sentinel novella
OUT OF CONTROL in PREDATORY
Published by Kensington Publishing Corporation
Some Like It Wicked
A
LEXANDRA
I
VY

Emilie and the Sky World by Martha Wells
The Fellowship of the Hand by Edward D. Hoch
Under His Wings by Naima Simone
Maddie's Bet: Sex With a Stranger by Libby Cercasa
Vendetta: An Aurelio Zen Mystery by Michael Dibdin
Cop Job by Chris Knopf
Momfriends by Ariella Papa
Witch's Awakening by Neely Powell
Desert Wolf by Heather Long
A Confederacy of Dunces by John Kennedy Toole
Our partner