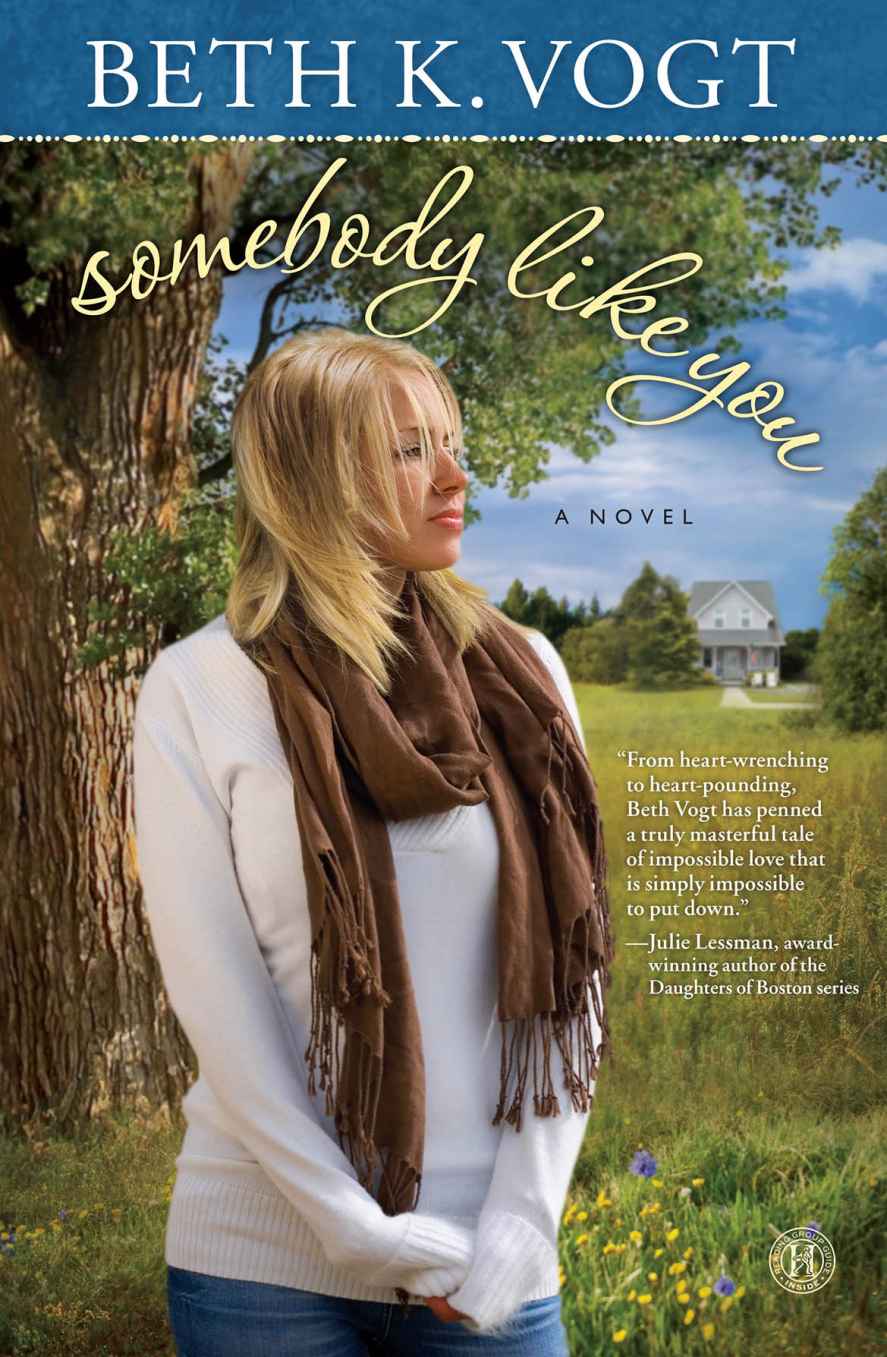 Thank you for downloading this Howard Books eBook.

“In Vogt’s quietly beautiful inspirational contemporary, two people learn to let go of the past and discover that God often works in mysterious ways. . . . A heartwarming tearjerker about learning what love is.”

“Beth Vogt gets better with every book.
Somebody Like You
wrestles with the tough topics of widowhood and family while wrapped in the heart-warming cocoon of romance. Bravo to Vogt for coming up with an intriguing concept and executing it brilliantly.”

—Rachel Hauck, award-winning author of
Once Upon a Prince

“A beautiful story of an unexpected second chance at love and redemption by one of my favorite authors. I loved this book!”

—Susan May Warren, bestselling and award-winning author of
It Had to Be You

“In
Somebody Like You
, Beth K. Vogt captures the tender emotions of loss with grace and sincere understanding. An expertly handled story of rekindled hearts and the whisper of a hope-filled future are safe in her very capable hands. For the broken, for the awakening of new love, for the heart that seeks a champion to heal its wounds . . . this is a special book.”

—Kristy Cambron, author of
The Butterfly and the Violin

“With crisp prose, flesh-and-blood characters who live and breathe on the page, and a poignancy that reaches into one’s very soul,
Somebody Like You
is not only a must-read for somebody like you . . . but for anyone who loves great fiction.”

—Julie Lessman, award-winning author of the Daughters of Boston series

“Woven with grace and sensitivity, author Beth K. Vogt sheds a tender light on the human spirit in this bittersweet story of love and loss. Beautiful and emotion-packed, the only bookmark for this is a Kleenex, for
Somebody Like You
will tug at your heart in a way that is not easily forgotten.”

—Joanne Bischof, award-winning author of
Be Still My Soul

“
Somebody Like You
is a story filled with characters I adored from the opening paragraphs. At the end, I sighed, longing for just a few more pages with my new friends. A perfect read for those who like a romance with a rich story and heart.”

“Poignant, intriguing, and not without its lighter moments, too, Beth Vogt’s
Somebody Like You
captured me from the first chapter. The unique premise had me curious from the start, but it was the emotional depth combined with heart-tugging characters that had me reading until late at night. A beautiful story, beautifully told.”

—Melissa Tagg, author of
Made to Last

“With a poignant plot and a tenderness that grips your heart,
Somebody Like You
is a story to be savored. Vogt shows how God restores the brokenness in lives for his happily ever after. This engaging read brought tears to my eyes several times, but it concluded with a heart-sighing smile.”

“
Somebody Like You
grabbed my interest from page one and didn’t let go. Beth K. Vogt pens this heart-wrenching and tender romance between a military widow and her husband’s estranged twin brother with the deftness and assurance of a skilled storyteller, rendering deep emotion without ever dissolving into melodrama. My only complaint is that it had to end! If Beth’s first two novels marked her as an author to watch,
Somebody Like You
proves she’s here to stay.”

“
Somebody Like You
takes you on an emotional journey to witness the bravery of a widow in the face of impossible circumstances. Beth Vogt has written a book you will not soon forget.”

For the ones who have been broken and whose dreams have been lost . . . and for the One who finds us and restores our dreams

“The Lord is close to the brokenhearted and saves those who are crushed in spirit.”

“W
e’re lost.” Stephen tossed the words at Sam’s back. “Hey! Did you hear what I said?” Probably not. Sam tromped through the underbrush as if he was fifteen, not ten, crunching fallen leaves and twigs with each step and bending small seedlings under his brown boots, the laces of one trailing in the dirt.

Once Sam crested the side of the ravine they’d been walking along, he stopped and turned to face Stephen, revealing a sunburned nose. “We are not lost.”

So his brother had heard him—he’d just ignored him until he wanted to talk. Stephen scrambled up beside Sam, wiping away the sweat that had gathered on his forehead. “Do you know where we are?”

“Not yet.” Sam pushed up his Dallas Cowboys Super Bowl baseball cap and scanned right, then left. “Give me a minute and I’ll figure it out.”

“I told ya, we’re on an adventure. If we’re exploring, then we’re not lost.” Sam pulled a crumpled bag of beef jerky from his jeans pocket, offering it to Stephen before taking a few pieces for himself. “We’re discovering new things. New places.”

Just sniffing the salty tang of the leathery jerky made Stephen’s mouth water. “So far the only things we’ve discovered are a patch of poison ivy, an empty bird’s nest, and how long we can walk and not find camp. Dad’s gonna let us have it when we get back—if we ever figure out how to do that.”

His brother scratched at a mosquito bite on his neck, causing all the itchy spots on Stephen’s body to demand attention.

“We’ll find it. Do you remember seeing any weird trees or big rocks while we were hiking this morning?”

“I dunno. Where’s the creek?” Stephen turned a slow three-sixty. “I know our campsite is somewhere along the creek.”

“Yep. And we crossed the creek once, so we—”

“Need to find it and cross it again to be going in the right direction.”

“See? We’ll figure this out.” Sam pulled his canvas-covered canteen around to the front of his body. “Better have some water before we get started again.”

Stephen gnawed on the teriyaki-flavored beef jerky, periodically taking small sips of lukewarm water that pushed back the thirst building in his throat. The sun filtered down between the branches of the trees, but even with the lingering coolness of the Pennsylvania mountain air, sweat dampened Stephen’s gray cotton T-shirt. “How long have we been hiking?”

“I don’t know. I left my watch in my sleeping bag.”

“Mom probably made breakfast already—and she promised us blueberry pancakes and bacon.” He swallowed a hunk
of jerky. “This stuff tastes like I’m chewing on my hiking boot.”

Sam sipped more water, wiping his mouth with the back of his hand and leaving a streak of dirt across his chin. “It’s this or nothing.”

Why had he listened to Sam’s “let’s go exploring” suggestion this morning? A hike sounded like a good idea then—tromp around the woods a bit instead of sitting around, staring at the remains of last night’s campfire while Mom and Dad still slept in the tent. Sam had promised they’d be back before their parents woke up.

Getting lost hadn’t been part of the plan.

“Do you think they’re going to go tell the ranger? Maybe get a search party?”

“We’ve only been gone a couple of hours.” Sam rolled his eyes, positioning his cap backward on his head. “They won’t do anything like that until it’s getting dark and we’re not back . . .”

“But we’ll be back to camp before then, right?”

“Sure we will.” Sam hooked his arm over Stephen’s shoulders. “It’s not even lunchtime yet.”

After tucking the now-empty plastic bag in his pocket, Sam pointed toward the steep hill off toward their left. “We’re going that way.”

“Did we go downhill on the way out of camp, Sam?”

“I think . . . so.” His brother had already scrabbled partway up the hillside, his voice floating back to Stephen in short puffs. “I want to get higher . . . maybe we’ll see something . . . from up there.”

He started to follow, Sam’s feet sending small rocks and clods of dirt skittering down the side of the hill and into his face. Stephen coughed, pausing to put some space between him and his brother before resuming the ascent. Maybe when they got to
the top of that ridge, they’d recognize something. Maybe they’d see their campsite. Or a big sign saying
THIS WAY BACK TO MOM AND DAD
.

When his foot slipped on some loose rocks in a patch of scree, Stephen went down hard, his chin hitting something sharp. He bit his tongue, tasting the metallic flavor of blood, and lay with his face sideways in the dirt, leaves, and stones for a few seconds.

“Sam!” His voice was muffled as he held his hand over his chin, his fingers warm and wet. He tilted his head, watching his brother put more distance between them.
“Sam!”

Sam paused, looking back over his shoulder. The sight of Stephen sprawled on the side of the hill prompted Sam to half run, half slide back down. Stephen closed his eyes against another shower of debris.

Sam crouched beside him. Against the sunburn on his nose, his face looked white. “You’re bleeding.”

Stephen swallowed the taste of salt and iron. “Yeah. Figured. I banged my chin on a rock or something.”

Sam hated blood even more than Stephen did. “There’s nothing you can do about it. Didja bring a bandana with you?”

“Yeah.” Sam pulled a folded red bandana out of his back pocket and handed it to Stephen, who pressed it against his chin, exhaling with a sharp hiss.

“Mom would say to rinse that out.”

“Let me see your hand.” As Stephen switched hands and held the material to his chin, his brother poured a bit of the tepid water from the canteen onto his fingers. “Think you’re gonna need stitches?”

“Maybe.” Stephen sniffed, then tried to cover up his tears
with a cough. “Got some dust and stuff in my mouth. You got needle and thread with you?”

“I’m not sewing—” Sam’s wide-eyed gaze collided with Stephen’s, and he smirked as he realized his brother’s joke. “I’m sorry, Stephen.”

“For suggesting this hike. We’re lost and we missed breakfast and now your chin’s busted—”

“Hey, did you think I was gonna let you go hiking by yourself ? The Ames brothers stick together, right?”

The Telephone Gambit: Chasing Alexander Graham Bell's Secret (v5) by Shulman, Seth
Raindrops on Roses: Book One of the Favorite Things Trilogy by Millenia Black
August in Paris by Marion Winik
Trapped by Annie Jocoby
Heart of the Hunter by Anna, Vivi
Devil's Palace by Margaret Pemberton
The Monster Within by Kelly Hashway
The Doctor by Bull, Jennifer
The Paris Deadline by Max Byrd
The Syndicate by Shelena Shorts
Our partner