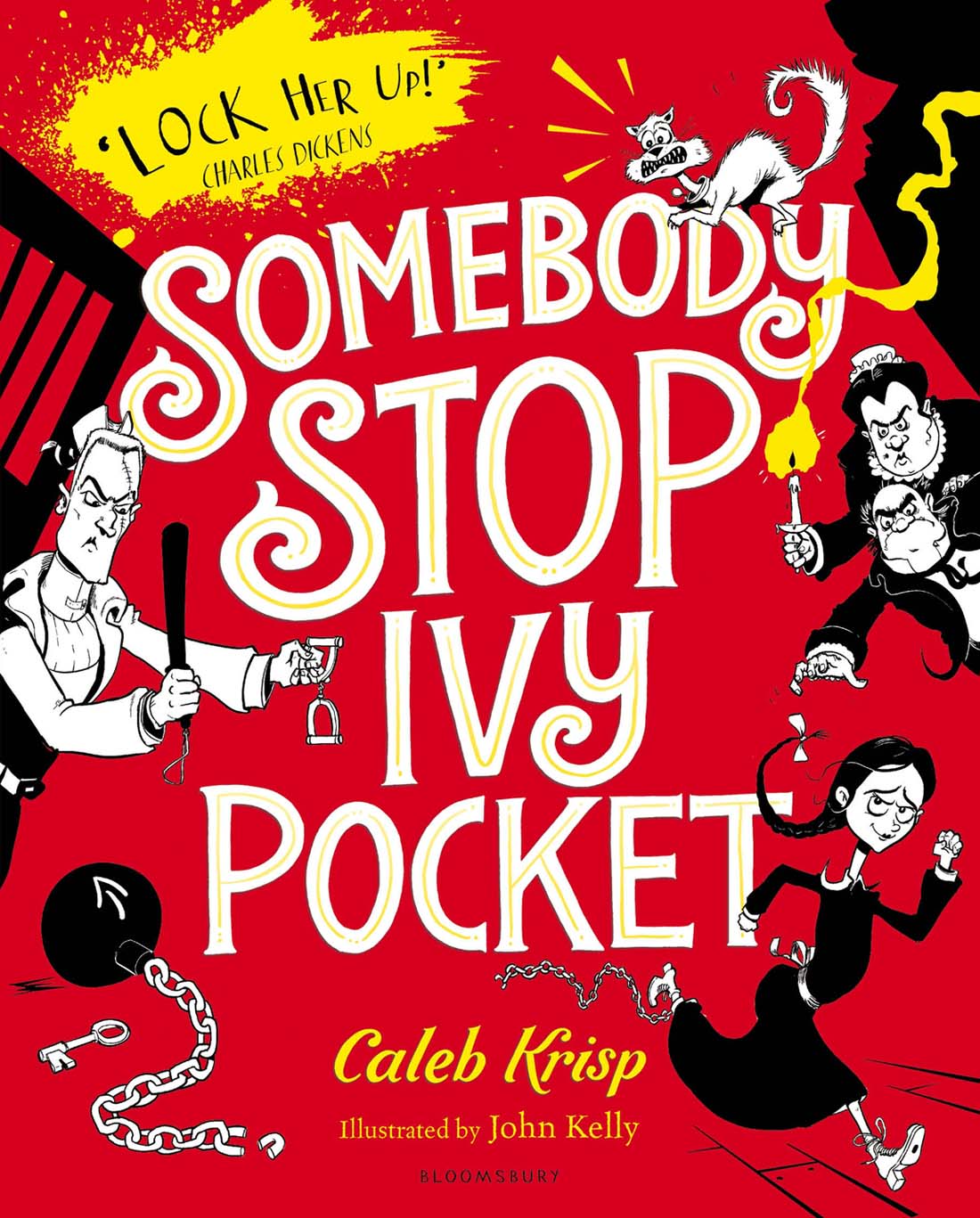 For my grandfather, Plantagenet Krisp,
who never saw it coming 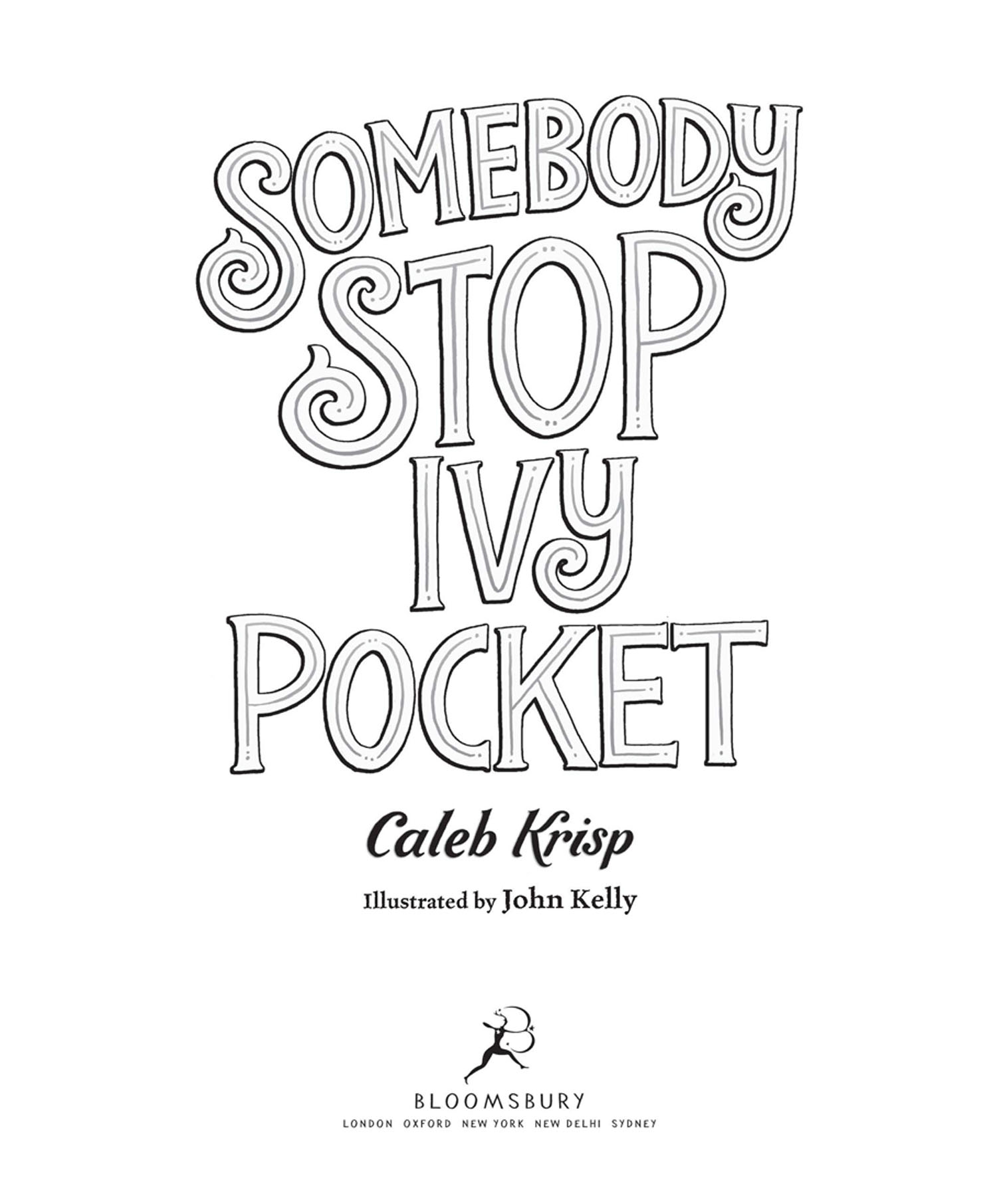 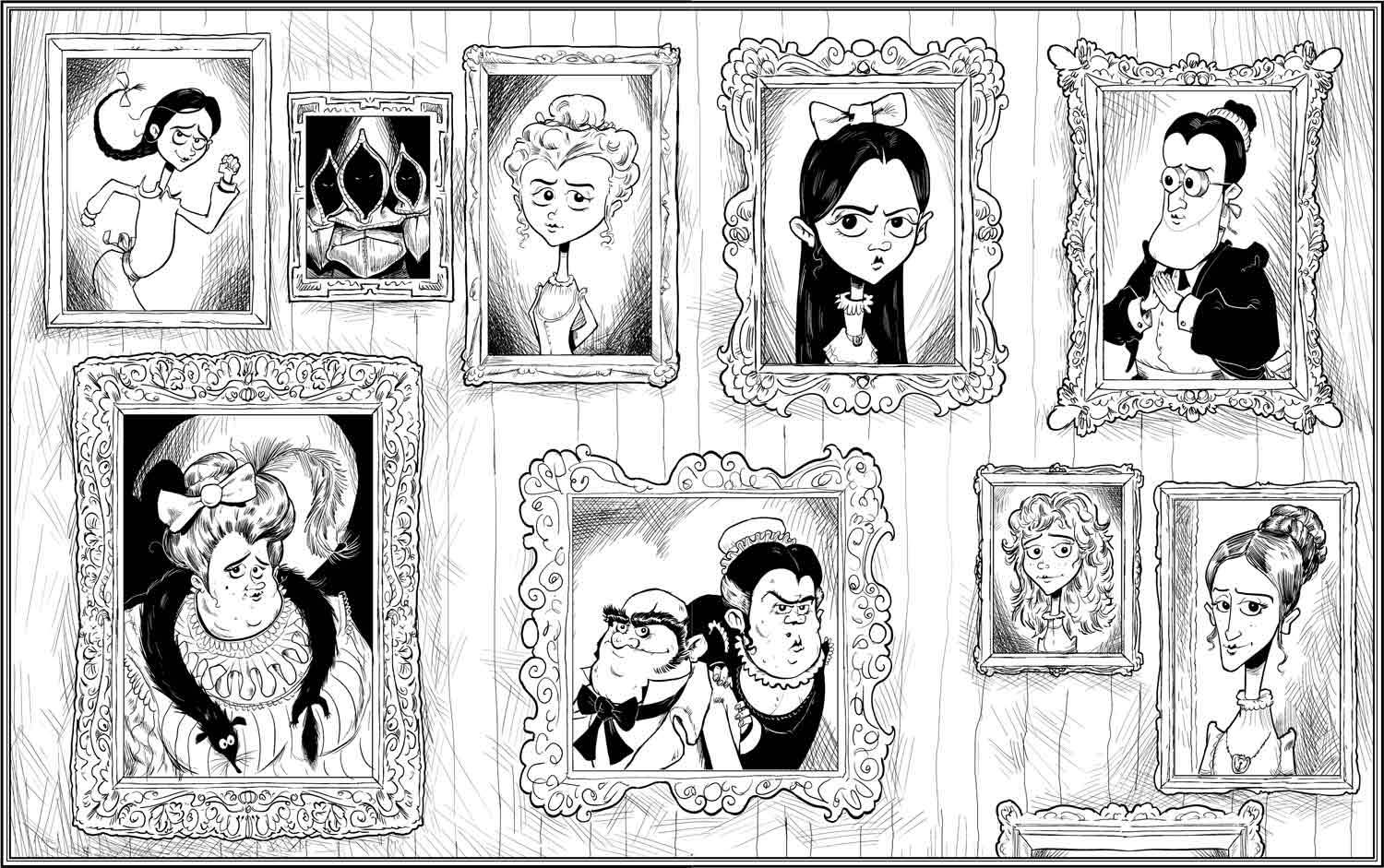 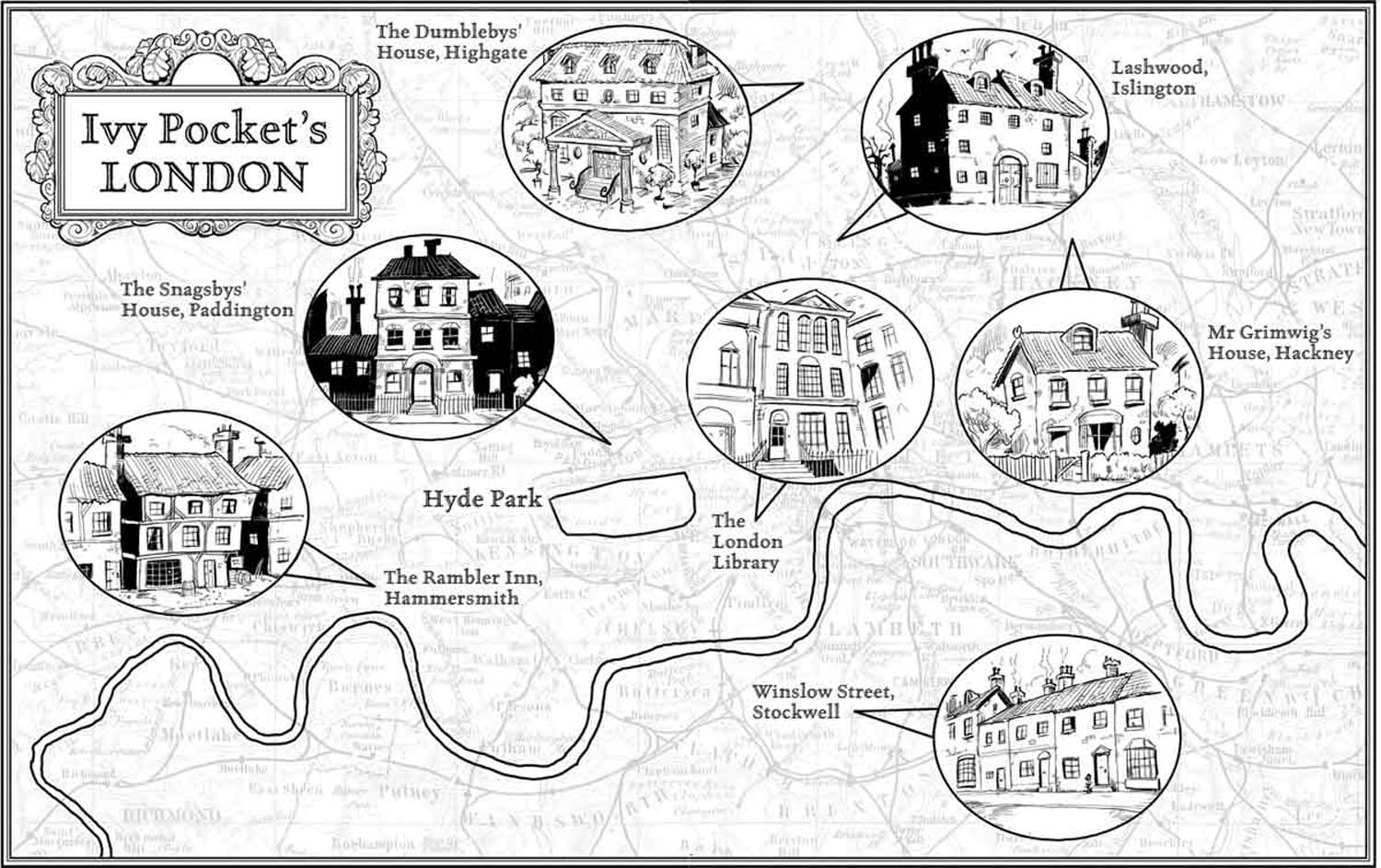 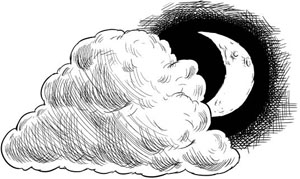 ‘What have you got for us this time, Ivy?’

I patted the pocket of my dress. ‘“Petals on the Wind”. It’s frightfully touching – all about dropping dead and floating away on a warm breeze.’

Ezra Snagsby gave a nod of his head, which caused his heavy jowls to flap about gloriously. ‘Very good.’ Then he peered at me rather anxiously from beneath the untamed jungles of his bushy eyebrows. ‘You will read it as
written
, won’t you, Ivy?’

He nodded again – but this time at Mother Snagsby, who was
terribly
dignified. Even when the carriage hit a pothole, shaking us like rag dolls, Mother Snagsby barely moved an inch.

‘I have Miss Carnage to thank for “Petals on the Wind”,’ I said, smoothing out my very best royal-blue dress (with the white sash). ‘She took over after Mr Abercrombie vanished – he was last spotted somewhere between Greek Myths and French Fiction. All very mysterious. Miss Carnage has only been at the library a few weeks, but she’s already frightfully fond of me.’

‘That’s very interesting, Ivy,’ said Ezra with a long sigh. He leaned his head against the side of the carriage. His heavy lids shut. The old man was snoring almost instantly.

‘Faster, driver!’ bellowed Mother Snagsby, hitting the top of the carriage with her parasol. ‘We haven’t got all day!’

Before Miss Frost sent me to London to live with the Snagsbys three months ago, I had little experience of being a daughter. I remembered nothing of my real mother. I only knew that she was dead. That Miss Frost had found me quite by accident, curled up in her lifeless lap, in some ghastly house. But it turns out, I’m a natural.

‘You have a whip, man – use it!’ thundered Mother Snagsby, sticking her head out of the window. ‘Or must I come up there and do it myself?’

The Snagsbys were a delightful pair. Ancient. Heads like lightly beaten melons. Matching back humps. But wondrously affectionate. Deliriously cuddly. Their daughter, Gretel, was at finishing school in Paris, so they had oodles of love to lavish upon me. It would be fair to say that I was the apple of their eye. The sun brightening their days.

‘Stop squinting, young lady,’ snapped Mother Snagsby, showering me with a warm scowl. ‘It makes you look like a pickpocket.’

Mother Snagsby was always lavishing these tiny morsels of
motherly advice and affection upon me. Pointing out how I might improve. Or be slightly less horrendous. Which was lovely.

‘Sit up straight,’ she ordered. ‘When a girl isn’t blessed with pretty features or fetching hair, she must employ other skills – good posture, refined speech, impeccable manners.’

‘And you use them to great effect, dear,’ I said, flashing my most understanding smile. ‘Your generous use of powder is a marvel. Never has so much been done with so little.’

Mother Snagsby shook her head as if I were a nincompoop. ‘Whatever was Miss Frost
thinking
, lumping you on our doorstep?’

‘Miss Frost is a wonder,’ I replied. ‘Somehow she knew we would be a perfect match.’

Mother Snagsby shook her head again. No doubt trying to stop the tears of joy which threatened to burst from her beady eyes and drown us all. The Snagsbys hardly ever mentioned Miss Frost. They only knew her in passing. Believed her to be some sort of travelling governess. Somehow Miss Frost had got word that they were in the market for a daughter. They never asked how I came to know her or what I was doing at Butterfield Park. In fact, the Snagsbys had no interest in my life before I came to live with them.

‘Fix your braid,’ said Mother Snagsby. ‘Your hair looks as if you’ve been out in a windstorm.’

‘Which is true enough,’ I said, getting to work on my hair. ‘While I was out this morning fetching the milk, buying the bread, picking up the bacon for your breakfast and taking your shoes to be mended, there was the most violent gust of wind. I saw a fruit pedlar lifted off his feet and thrown against a nearby carriage. The poor man broke into three pieces. Utterly tragic.’

‘Not to him, dear,’ I said gravely. ‘And just think of his wife and their eleven children.’

The Snagsbys knew nothing about the Clock Diamond. It was monstrously tempting to tell them – a secret as delicious as it was horrifying – but I had promised Miss Frost. Besides, the Snagsbys were simple folk. Unworldly. All the sophistication of a scrambled egg. It would terrify them to know that I was wearing a priceless and deadly necklace.

‘This is not a leisurely drive through the park,’ bellowed the old goat. ‘Get a move on!’

We were in something of a hurry. And it was all on account of death. My best blue dress. The poem in my pocket. The tape measure around Ezra’s bony neck. The Snagsbys made coffins for a living – Snagsbys’ Economic Funerals was a thriving business, specialising in generous discounts for pre-measured coffins.

‘The viewing chamber was in a ghastly state this morning,’
said Mother Snagsby, eyeing me with motherly affection. ‘When our business is concluded you will clean that room until it sparkles. Am I understood, young lady?’

‘Hard to say, dear,’ I replied. ‘You tend to mutter a great deal – I find it easier just to
imagine
what you have said and go from there.’

Before Mother Snagsby could explode with merriment, the carriage came to a sudden halt. Ezra was thrust forward, his bony body landing in a heap at my feet. The poor fellow woke with a start and immediately let out a painful groan. He clutched at his back, slowly picking himself up.

‘Get a move on, Ezra. We haven’t got all day,’ snapped his wife, peering out at a depressing row of houses.

‘If your back is troubling you, I have an excellent remedy,’ I said, as the carriage door opened. ‘All I require is a cup of lard, a ball of yarn, three carrots and a field mouse.’

Ezra began to chuckle, which was terribly unnecessary. Mother Snagsby rolled her eyes and pushed her husband out of the carriage. Then she fixed her eyes upon me.

‘This is a house of death,’ she said sternly, ‘so you know
exactly
how I expect you to behave. Stay out of the way until you are needed and do your job when you are called. Understood?’

I nodded my head.

Mother Snagsby stepped out of the carriage and I hurried after her.

‘Thank heavens you are here!’

Mrs Blackhorn was a marvellous creature – round of belly, fat of cheek, bad of breath. But it was what sat atop her head that really made an impression. A glorious crown of golden ringlets that would slip down Mrs Blackhorn’s brow as she fussed around her husband’s sickbed. She was forever yanking it back up.

‘I have been counting the minutes!’ she bellowed, clutching at her perfectly dry handkerchief and ushering us into the darkened bedroom chamber. ‘Poor Mr Blackhorn is not long for this world. The doctor says his heart has finally given in. I’ve nursed him day and night – an angel, that’s what he calls me.’

‘A devil’s more like it!’ barked the dying man, lifting his pasty head from the pillow. ‘I’m doomed to die in this filthy bed, full of fleas and lumps, while you spend my money on your fancy ribbons and foolish curls.’

Ezra took off his tape measure and began the beastly task of taking Mr Blackhorn’s measurements.