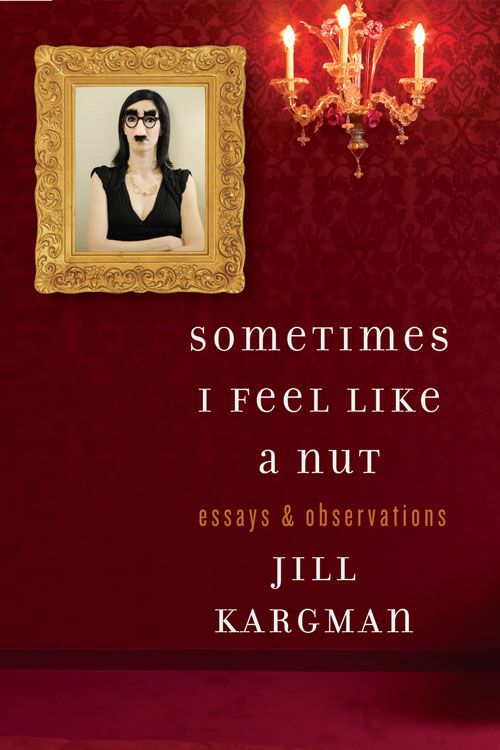 my hero and the funniest human ever

10  A Letter to My Crappy One-Bedroom

11  My Vagina Is the Holland Tunnel

17  Putting the Ass in Aspen

The irony is I fucking hate coconut. As in full vomitorious spine chills just thinking about its nasty texture, to say nothing of the chunder-taunting scent that conjures peroxide-y sluts smearing their ’kini cleaves with Panama Jack “tanfastic” oil. I might even go so far as to say I don’t even trust people who like coconut. But still, despite nightmarish Hawaiian Tropic/
Girls Gone Wild
visions and hellacious flashbacks of a bearded Tom Hanks looking not unlike the twentieth hijacker eating coconuts on that island, if I had to identify myself with one advertising campaign, it would be the eighties jingle of Mounds and Almond Joy. Sometimes you feel like a nut, sometimes you don’t.

For twenty-five years, my father worked for Doyle Dane Bernbach, the legendary Madison Avenue advertising agency that was proto–Don Draper, complete with the same martini lunches and genius minds, but the Jewy Jewstein version. When most peeps see commercials, they get up to pee, get another soda, or comment on the program that was just interrupted. Yeah, no. Not in our house. “Be quiet,” my dad would instruct us through the first decade of my childhood. “Guys, shhhh, please, the commercials are on.”

He was obsessed, so we were obsessed. Copywriting. Casting. Execution. We raved about great ads and rolled our eyes over the shitty ones. I still do (Dr. Scholl’s “Ya Gellin’,” anyone?). I started to think of individuals in terms of campaigns. The blow job queen was Bounty (“The Quicker Picker-Upper”), the geeks who got hazed in high school were Timex (“Takes a Licking and Keeps on Ticking”), the virginal church mouse was Ivory soap (“99.44% Pure”), the hot guy I had a crush on was Bell telephone (“Reach Out and Touch Someone”—i.e.,
me
).

My brother and I grew up so attuned to branding and media images that when it came time to write my college essay, to, in fact, brand myself, I chose to do so with a slogan. At the time, fall of 1991, HBO’s tagline was “Simply the Best.” AT&T’s was “The Right Choice.” I could have kissed ass and picked one of those and sold myself in a shining halo of light as the girl upon whose blessed head they should bestow admission. But I am a firm believer in truth in advertising. So while I could have tooted my horn and painted myself as my public persona of well-rounded student, a capella singer, newspaper editor, big brag sheet blah blah blah, the reality was—and still is—that I’m a weirdo. I’m inappropriate. I laugh when I’m not supposed to (actress in a play accidentally falling off the stage, funerals), and I peed my pants a little bit when my poor French waiter tried his damndest to recite the “made in de haus ice cream flavors” as “bitch and apricunt.” I laugh all day long, pretty much. I can’t not laugh. Humor has been the buoy that keeps my entire family afloat.

My dad did stand-up comedy to put himself through business school and he instilled in us a value system based on good times and cackles aplenty. Not the let’s-dance-on-tables-and-snort-lines-of-coke type of good times, but let’s laugh our asses off if we can. We’re all gonna be dead in eighty years or less, and the ones who live the best obviously aren’t the ones with the most money or most successful careers; they’re the ones who laugh the most. Who are the most nutty. Not as in wack-job serial killer who makes suits out of fat people, but as in the right kind of bonkers. The goofy kind. The type who giggles and guffaws, even in tricky times.

My idol, Woody Allen, once had a character in one of his films hatch a formula I value above anything Einstein could have cracked: Comedy = Tragedy + Time.

Brilliant, right? The bigger the tragedy, the more time is needed, obviously (remember when everyone went shithouse when the
New York Post
used “H’caust” in a headline to abbreviate “Holocaust”?!). And obviously big tragedies can’t ever become comedic. The little blind panhandling child in
Slumdog Millionaire
won’t sit around at age ninety-two and be like, “
Ha,
wasn’t that so funny how those beggar pimps poured acid in my retinas?” But in general, my 20/20 hindsight has made me, eventually, absolutely
howl
at anything on the spectrum, from the ordinary, Seinfeldian banal (“That’s gold, Jerry, gold!”) to situations that were, at the time, unbearable. Granted, my life is a slice of cheesecake relative to what some endure (
Slumdog Millionaire
chemically burnt eyeballs et al.); I was hardly shaking a cup on the corner, I’ve never buried parents, and my New Yorker frenzied “stress” of being a working mom of three was always relative. But I did get cancer at thirty-five. And the surgery gave me scars that make me look not unlike stitched-up Sally from Tim Burton’s
The Nightmare Before Christmas
. But, honestly, in comparison to some past romantic breakups and other previous life drama, the C-word was nada mucho. (BTW, the C-word used to be not “cunt” but “cobbler,” a term I detest because it’s a fruit dessert
and
someone who fixes shoes; go figure.)

Because I’ve trained myself to use nuttiness as a coping mechanism, the surgeons at Sloan-Ket
tering were quasi-uncomfy with my O.R. Tumor Humor (“So am I totally gonna be Sinéad O’Kargman or what?”). But when I e-mailed my friends updates and wisecracks about my wheelchair drag racing, they all said they were happy to see I was still joking around. That I wa
s still myself, still a nut. I think in my little abacus of smiles,
I’m racking up more than most. I’m hoping that anyone who may be in a quagmire might recognize themselves in some of these bizarre adventures and know that, in time, as St. Woody of Allen said, they will be mined for comedy. More than comedy. Gold, Jerry, gold.

after party:
I do not know what this is. Must be in PJs and ’zontal by Jon Stewart or eyelids are at half-mast and “beeyotch” takes on new meaning.

food baby:
When you eat such a huge meal you look pregnant—but instead of the tenant being a fetus, it’s eggplant Parm.

Frederica Bimmel:
The size-14 murder victim whose skin Buffalo Bill fashions into a suit in
The Silence of the Lambs
. As in:
OMG, I can’t believe we ate those cheese
fries at that hour; I’m Frederica Bimmel.

godfathering:
Having heavy days of your period, i.e., blood everywhere. As in:
We can have sex tonight, but I’m totally godfathering so the bedsheet will make the Law & Order sound when we finish.

jam-jim:
Ladino word my mother uses to mean “the sound in a mosque,” i.e., silence. For example:
We went to this new restaurant that was supposed to be happenin’ but when we went in, it was totally jam-jim.

kielbasa fingers:
When you chow too much MSG and your rings are cutting off circulation. For instance:
OMG, we totally feasted at China Fun and this morning I have total kielbasa fingers
. Synonym: “soy-raped.”

maror:
Bitter herb in Passover Seder but used colloquially, as in,
That girl is always complaining; why is she so fucking maror?

matando moshcas:
Ladino expression: killing flies, like when someone has nothing to do. E.g.:
Poor department stores in this economic crisis! I walked into Bendel’s and the salespeople were matando moshcas!

Sistine baby:
A little nugget so cute s/he looks chiseled off an Italian frescoed ceiling.

Spitzering:
Bangin’ hos. Oh, sorry, “courtesans.” Like,
They seem like a really cute couple but I hear he’s totally Spitzering.

wait up, guys:
A certain type of social climber whose identity is wrapped up in running with those s/he deems “popular.” As in:
Wait up, guys, what’re you doing? Oh, after party at the Boom Boom Room? Wait up!

WORDS I WANT TO BRING BACK INTO HEAVY ROTATION

crummy:
I never knew it was spelled with two
m’
s and not like “crumby,” like something that instantly disintegrated into crumbs. But no, it’s “crummy.” And I love it. See “lousy.”

golly:
I use “OMG” a lot but now that it’s been co-opted by Miley and the gang, I want to revert to the Pollyanna version. Especially after I e-mailed my mom “OMFG” and she was unpleased.

lousy:
My dad always says it when food tastes like shit and I think it’s really ol’ school and funny.

robber:
I feel like kids today don’t fear “robbers” the way my brother and I did, seventies-style, like the Hamburglar with the Zorro mask and shit.

guesstimate:
My friend Lisa’s personal cheese-grater-to-the-ear, and as with things that irk close friends, it’s contagious. Fuck “guesstimate.” You can totally see the person who came up with it feeling so clever, like whoever invented “Hotlanta.” Which isn’t even clever ’cause it doesn’t rhyme! I would like to rename it “Fatlanta.”

“I have a salmon special for $19.95”:
Double whammy. I hate when waiters say “I have” (you don’t “have” anything, you’re just fucking bringing it out). Also not into when they give the price. Unless it’s some serious gouging, like white truffles or lobster flown in from a private Richard Branson–y island off the coast of Maine and you’re paying for the airfare. With little lobster seat belts.

nother:
As in
That’s a whole nother thing
. “Nother” is not a word, people!