Read Somewhere Only We Know Online

Somewhere Only We Know 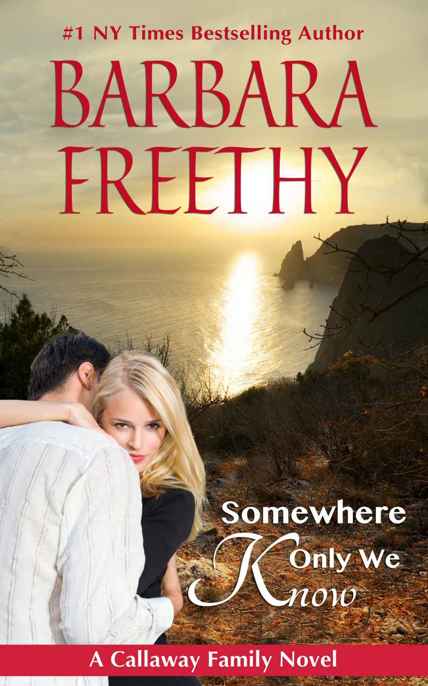 In The Callaway Series

So This Is Love
(Callaways #2)

Falling For A Stranger
(Callaways #3)

Between Now And Forever
(Callaways #4)

Nobody But You
(A Callaway Wedding Novella)

All A Heart Needs
(Callaways #5)

Firefighter Burke Callaway has been living in the shadows since the tragic death of his fiancée. He had no interest in coming out of the dark, until the beautiful and unpredictable Maddie came back to town.

Maddie Heller is the ultimate free spirit, her love of life and cooking taking her all over the globe, and only a few people know that her easy smile covers a personal tragedy. With a new job offer in San Francisco, Maddie thinks it might be time to stay in one place, especially when she runs into Burke again.

Burke was the handsome, sexy hero of her youth, who could do no wrong. Maddie was the pretty, fun-loving girl of his youth, who loved to break the rules. They were opposites in every way, but there was always a connection. It was just never the right time or the right place—until maybe now.

But their budding love story suddenly takes a dangerous turn, and a series of escalating incidents makes them realize that falling in love might not just be scary but also deadly.

This is a work of fiction. Names, characters, places, and incidents are products of the author's imagination or are used fictitiously. Any resemblance to actual events, locales, organizations or persons, living or dead, is entirely coincidental.

The cold wintry night was eerily similar to the one three years ago when thick clouds of fog had swept into San Francisco just after dusk, shutting out the last bit of daylight, holding the city in the icy fingers of late January. And just like that night, Burke felt a chill run down his spine, an uneasy feeling that was heightened by the sirens that suddenly lit up the air.

As a firefighter, he was used to sirens, to emergencies, to the unthinkable happening in a second, but nothing had prepared him for
that
night.

He tried to force the horrific images out of his mind.

It wasn't the same, he told himself, but three years had done little to erase the memories, which was why the last thing he wanted to do was attend yet another memorial dinner in honor of his late fiancée Leanne Parker. But Chuck and Marjorie Parker insisted on remembering their only daughter's death every year since the tragic car accident had taken her life. As Leanne's former fiancé, he could do nothing but support them. It was his duty to attend, and he'd never been a man to shirk his duty.

As a cold blast of wind rocketed through the tall buildings that surrounded him, he zipped up his jacket and proceeded up the steep hill to the Hanover Club. Originally a private gentlemen's establishment started by one of San Francisco's first families, the Hanover Club now catered to high-powered executives and politicians of both genders interested in holding parties or meetings. Tonight was something in between…

He stopped, surprised at the sound of his sister's voice. He turned around to see Emma and his younger brother Sean walking quickly up the hill behind him. Emma was a slender blonde with snapping blue eyes that reflected her sparkling, often stubborn personality. A fire investigator for the San Francisco Fire Department, she'd obviously come straight from work, wearing her navy blue slacks and matching jacket.

Sean wore dark jeans under a black wool coat, and like all the Callaway men, he had brown hair and blue eyes. But while Sean looked like everyone else in the family, he was in many ways the odd man out: the musician, the soulful, emotional singer/songwriter in a family of overachievers, many of whom were firefighters.

"What are you guys doing here?" Burke asked.

"Supporting you," Emma said with a purposeful smile, as if she was expecting to get an argument from him. "You should have told us about the dinner, Burke."

"I didn't tell you, because I didn't want you to come." Bluntness was the only thing that worked when it came to his stubborn younger sister. "How did you find out?"

"Mrs. Parker called Mom to see who from the family would be attending. You can imagine how thrilled Mom was that you hadn't told her."

Now he knew why he had four voice messages from his mother that he had yet to listen to. He'd also been avoiding his text messages, which had been pinging away all day. He glanced at Sean and frowned. "And you—this is what you decide to show up for? The guy who misses almost every family event? This one you have to make?"

Sean gave him an understanding look. "Emma insisted. Drew and Ria are on their way as well as Aiden, Sara and Mom. Jessica and Nicole send their regards, but they had a school function with Brandon and Kyle tonight. I'm not sure what's up with Shayla or Colton."

"They're both stuck at work," Emma put in. "And Dad had a dinner meeting he couldn't miss."

"Thank God for that," Burke muttered. While he was close to his father, Jack Callaway had a huge personality, and Jack had never gotten along that well with Leanne's dad. Chuck was a white-collar investment banker and staunch conservative. Jack was blue collar all the way, although he now served as Deputy Chief of Operations for the San Francisco Fire Department.

"How are you doing, Burke?" Emma asked, her blue eyes filled with worry.

"I'm fine, and you really didn't have to come."

"We all loved Leanne. She was going to be part of the family."

"There's Mom." Sean tipped his head toward the top of the hill where his mother, his brother Aiden and Aiden's wife Sara were getting out of a car. "Don't fight it," Sean advised. "We're going to be here for you whether you like it or not. It's the Callaway way."

He knew it was the Callaway way. Usually, he was the first one to support a sibling or parent or cousin in need, but he wasn't used to being on the receiving end of the attention, and he didn't like it. As the oldest of eight siblings, he'd always been the one to take care of everyone else, to be the strong, independent leader of the family. It was a role he both loved and hated. It was tiring to always have to set the bar high. On the other hand, as his brother Aiden liked to remind him, he did have the chance to set the bar while the rest of his siblings had to follow.

They walked up the hill together, meeting up with his other family members outside the entrance to the club.

His mom Lynda gave him a hug. Aiden nodded, concern in his eyes, and Sara sent him a warm smile and told him that Drew and Ria were on the way.

As they walked through the lobby and into the private dining room, he saw Leanne's family and friends chatting around tall cocktail tables while waiters served champagne and appetizers. Despite the party set-up, there was a somber air in the room, and Burke felt better having some members of his family walking behind him.

Chuck saw him and immediately came over to shake his hand. Dressed in a dark suit, Chuck had aged in the last few years, his gray hair now completely white, and the shadows under his brown eyes had become permanent fixtures.

"Burke, I was beginning to think you might not make it," Chuck said.

There was a hint of censure in his voice, but that was Chuck. He was always demanding and often disappointed in the people around him. Leanne had told him many times that she just couldn't seem to make her father happy.

"Don't give him a hard time," Marjorie interrupted with a smile that was very much like her daughter's, and that smile made his heart squeeze a little tighter. "It's nice to see you, Burke. It's been a long time."

"Yes," he admitted. "I like your hair." Her normally brown hair was now a deep rich auburn.

She gave him a dimpled smile. "I decided to go red. Leanne always used to tell me I should change things up every once in a while, so today I decided to finally do that." Her gaze swept across the rest of his family. "I'm so glad you could all come. It means so much to us."

Burke stepped back as his mother and Marjorie exchanged a hug and Chuck shook hands with the rest of his siblings.

As he looked around the dining room, he saw four of his coworkers at one of the tall tables. Apparently, they'd also heard about the event. Since his cousin and fellow firefighter Dylan Callaway was at the table, Burke wasn't surprised they'd found out about the event. Next to Dylan was Frank Harding, who'd been friends with him since the fire academy, Rachel Briggs, a paramedic at their firehouse, and Shelby Cooper, one of their long-time dispatchers who also worked out of the firehouse.

He was touched by their attendance and not that surprised by their presence. His firehouse family was as close as his Callaway family.

Rachel and Shelby both gave him hugs while Frank slapped him on the shoulder and Dylan gave him a nod.

"Thanks for coming," he said.

"No problem," Dylan replied. "I remember last year the Parkers put on a good spread."

"You're always looking for your next meal," he said, appreciating Dylan's attempt to lighten the mood.

"Are you all right, Burke?" Shelby asked.

Shelby was a dark-eyed brunette in her mid-thirties who worked dispatch with a calm coolness that always kept them on track. Since Leanne's death, Shelby had offered him a friendly ear on more than one occasion. She'd also been friends with Leanne, so it was easy to share memories with her, not that they spent much time talking about Leanne anymore. It had been three years, but tonight it felt like yesterday.

"I'm fine." He wondered how many more times he would say those words tonight.

"Are you?" Rachel challenged. A tall, slender blonde, Rachel could have been a model if she'd had any interest in posing in front of a camera. But she was a tomboy at heart, a girl who loved action sports and pushing herself to the limit.

"I'd just like to get this over with," he told her.

She nodded in understanding. "I'm sure."

"We're going to Brady's after this," Shelby added. "You should come with us after you pay your respects to the Parkers."

"Looks like the buffet table is open," Dylan said. "Anyone want to get some food?"